You are here: Home / Politics / Glibertarianism / All Hail the Secret Austerity Czar

Our Glibertarian overlords have big plans for the 112th Congress. Despite wedging on about loving the Constitution, transparency, Government by the people, populism, deficits, etc., etc., etc.–the Leaders of the incoming Republican Confederate Party House majority have shown their fidelity to the oligarchs by crafting rules designed to blow holes into any effort to balance the budget while still transferring yet more wealth from the poor and middle class to the richest in the land.

A recent editorial in the NYTs explained the madness of the new rules:

The new Republican rules will gut pay-as-you-go because they require offsets only for entitlement increases, not for tax cuts. In effect, the new rules will codify the Republican fantasy that tax cuts do not deepen the deficit.

It gets worse. The new rules mandate that entitlement-spending increases be offset by spending cuts only — and actually bar the House from raising taxes to pay for such spending.

And just before Christmas the Center on Budget and Policy Priorities identified an even larger problem with the new rules. It seems that these rules would make Glibertarian fanboy, Paul Ryan, a super secret and all powerful Austerity Czar. 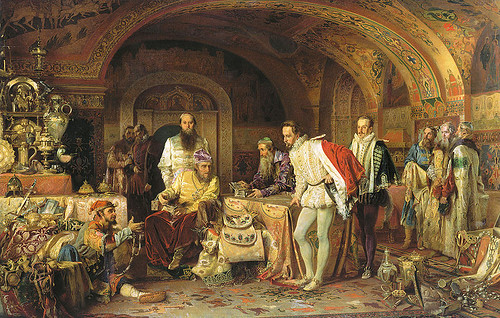 As Think Progress noted these new powers would let Austerity Czar Ryan “unilaterally set spending levels that are binding on the House, and any attempt to lessen the impact of these cuts can be ruled out of order”. Under the terms of this extraConstitutional power grab, Czar Ryan could force cuts to popular programs like Social Security without anybody else in Congress having a chance to read, debate or change the Austerity Czar’s cuts.

As the long Holiday week winds down more and more folks are noticing this fundamental attack on the way our democracy should work. More and more folks, like Steve Benen, are sounding the alarm. And the Democrats in Congress are letting the incoming lapdogs of the elites know that their attempt at this power grab will meet some resistance. As Chris Van Hollen’s office told The Hill:

“Allowing incoming Chairman Ryan to have unilateral power to set spending limits — instead of subjecting those limits to a vote on the floor of the House — flies in the face of promises by House Republicans to have the most transparent and honest Congress in history,” said Doug Thornell, spokesman for incoming House Budget Committee ranking member Chris Van Hollen (D-Md.), in an e-mailed statement.

“Unfortunately, the House GOP is reverting back to the same arrogant governing style they implemented when they last held the majority and turned a surplus into a huge deficit,” he added.

This is a developing story to watch and how this power grab is framed and reported will give one a good idea of easy things will be for Czar Ryan and his oligarch pay masters in the 112th Congress.

2011 should be an interesting year.

Have fun welcoming it in.

In a stylistic homage to Tom Levenson I include the image of Ivan the Terrible showing off his riches from the The Muscovy Trading Company to an English Ambassador of Queen Elizabeth I. The kind of elite controlled financial system that old Ivan the Terrible had in Russia is the system that Czar Ryan and the Republican Confederate Party House majority are striving to replicate with these new rules.

The 1875 painting, Ivan IV of Russia Shows His Treasury to Jerome Horsey, is by Alexander Litovchenko and hangs in Russian Museum of St. Petersburg (which is an excellent museum to visit if you’re ever in old Leningrad).