You are here: Home / Organizing & Resistance / Fables Of The Reconstruction / One wonders what the next vanity plate will be…

As John noted earlier, the neo-Confederates in Mississippi have decided to celebrate the legacy of a Slave Trader, War Criminal, American Traitor and Domestic Terrorist with a special commemorative license plate.

There are vile, violent and evil men populating the history of our Nation, but you have to look long and hard to find folks as immoral, dishonorable and deceitful as Nathan Bedford Forrest. He is a patron saint of white supremacy, racism and treason.

So naturally, he should be celebrated as a wingnutopia role model.

He was an entrepreneur and in the years leading up to the Civil War he made a fortune buying and selling people. He was the co-fonder of the “NegroMart” a wholesale mega store for slaves and when the war started he was filthy rich. 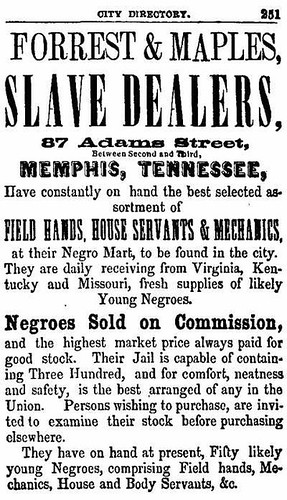 During the war he organized a gang of excessively violent and vengeful riders who were very skilled at the hit and run tactics of guerrilla fighting. He has been greatly mythologized over the years by the Church of The Lost Cause, but he was little more than a war criminal. Perhaps his most famous crime was the Massacre at Fort Pillow in 1864 where he ordered his troops to murder hundreds of surrendering troops. As Forrest himself put it in his first report of the killing field:

“The river was dyed with the blood of the slaughtered for two hundred yards. The approximate loss was upward of five hundred killed, but few of the officers escaping. My loss was about twenty killed. It is hoped that these facts will demonstrate to the Northern people that negro soldiers cannot cope with Southerners.”

One of the men under Forrest’s command wrote to his wife:

“the poor, deluded negroes would run up to our men, fall upon their knees, and with uplifted hand scream for mercy, but were ordered to their feet and then shot down.”

And historian Richard Fuchs, in his detailed study of the massacre described it as: 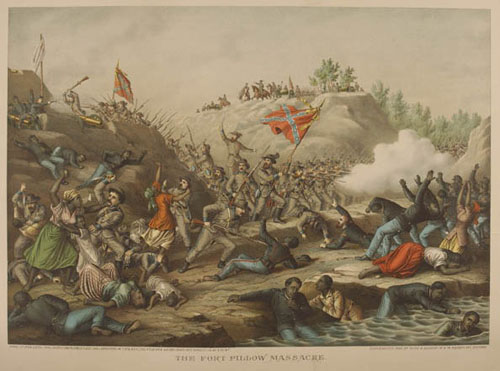 Taking action for the vilest of reasons is the phrase that best describes Forrest and the wingnuts dedicated to celebrating his legacy of shame.

When the war ended Forrest returned home but could not re-open his NegroMart, so he worked with other white supremacist to find new ways to steal the labor of the recently freed slaves. Over the years they used many tools but it all stated with terrorism and the theft of labor was maintained for a century with violence. When a fellow traitor told Forest about plans to form the Ku Klux Klan, Forest told him:

“That’s a good thing; that’s a damn good thing. We can use that to keep the niggers in their place.”

Soon Forrest was the first Grand Wizard of the KKK and bragging that he had 500,000 men under his command. The result over the next century was a body count in the thousands and uncountable ruined and damaged lives. 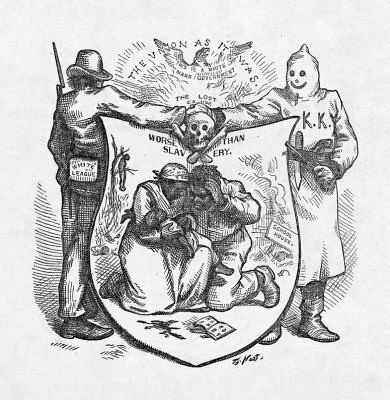 Before the war he road his “NegroMart” to become one of the richest men in the South, after the war he was a failure in business, bankrupting his companies. But his record in business is not why he is celebrated. It is his record as a traitor, war criminal, racist and domestic terrorist that these folks want to celebrate.

It is mighty white of them.

I wonder when these Teabaggers will start to call for a vanity license plate to honor Timothy McVeigh? Sure he’s a piker when you compared his treason and body count to the founder the NegroMart, but Forrest and McVeigh are fruits from the same poisoned tree. If you celebrate one, why not the other?

Or perhaps they could have a license plate celebrating the KKK or lynchings or the Red Shirt riots of 1875.

A more honest approach for these fuckers might just be to offer some “Kill the Nigger” license plates.

But honesty is not something they’ve ever done, so I suspect that they’ll stick to talking in code and use the musing of old Nathan to do so. Already iterations of his saying, “Get ’em skeered and keep the skeer on ’em” is very popular with white supremacist code talkers. It is a way to say I am not afraid to be violent, so you should be scared. The call for the Nathan Bedford Forrest plates is just a way to move a violent threat from a bumper sticker to a State sanctioned bit of intimidation.

Way to go Mississippi–that sure is a great way to diddle the nit. I suspect the race to neo-Confederate crazy town is on–I just can’t wait for it to become a litmus test in wingnut politics. The Mittster’s race with Pawlenty to defend the Lost Cause should be a thing of beauty.

What an incredible bunch of assholes these people are.