You are here: Home / Books / Republican Brains and Liberal Facts — A Conversation

I’ve just finished reading Chris Mooney’s latest, The Republican Brain, and I commend it to you all.  It’s Chris’s best, IMHO, intellectually (though not narratively) a sequel to his earlier best seller, The Republican War on Science. Or, perhaps more accurately, the new work is a response to that earlier one, an attempt to figure out why Republicans have become so (and increasingly) divorced from reality, why as a political movement, the G.O.P. has committed itself to so much that is, simply, objectively, wrong.

Chris and I will be talking about this later today as part of my monthly gig as a host for Virtually Speaking Science.  You can listen here at 5 EDT or later (after about midnight) to a podcast that will also be available through iTunes.  You can also join the live virtual studio audience in Second Life — throwing questions at us from either venue.

We’ll start with Chris’s argument: that a broad body of research from a variety of fields — psychology, cognitive science, evolutionary biology, and more — produces a reliable, reproducible nature and nurture account of systematic differences between conservative and liberal brains and minds.  In this account, conservatives act out of the quadrant of motives and neural systems that characterize “Closed” or resistant-to-new-experience personalities…and this renders them less able to respond to facts and/or argument that challenge essential beliefs. Liberals, or those who fall into the”Open” pattern do the opposite.

That’s the most simple minded cartoon of an inquiry into a lot of research that supports Mooney’s essential point:  there are fundamental attributes of how our minds work that shape whether or not we can accept or work very hard to ignore things like the reality of human-caused climate change, or the fact that tax cuts do not increase national revenue.

I find the book really persuasive on that score — but I do have a few points I’m planning to push Chris on.  One’s a historian’s thought — not so much a criticism, as a note that the vigor of reactionary denial of reality always ramps up at times of great change.  I’m thinking of a marvelous, if less-read-than-it-should-be book The Vertigo Years, Philipp Blom’s essayistic narrative of Europe’s schizophrenia from 1900-1914 — that tension between the legacy of Victorian assurance and the reality of massive cultural and social dislocative change. 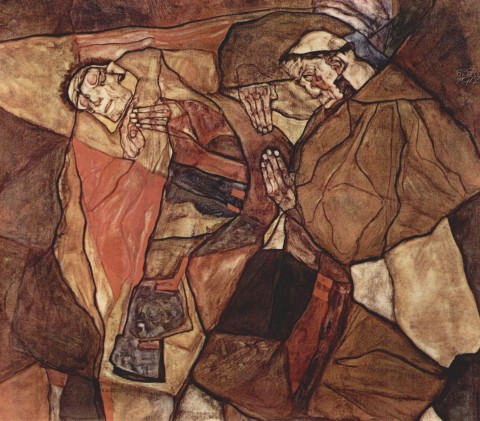 As I noted in yesterday’s post, we’re smack in the middle of just such a period right now.  The Way It Used To Be is simply unavailable to whole swatches of society who are now terrified by what’s going on with technology, social life, culture, the hierarchy of privilege.  That terror invokes exactly the kind of neurological and cognitive response Chris is talking about — and I’d like to go more into the implications of history, of the contingencies of time and place, especially as they bear on his suggested solutions to the problem of a Republic in which close to half of the political class (and their supporters) are delusional.

The second point I plan to push him on is a bit of “both sides”-ery he permits himself.  He argues that the benefits accrue both from the virtues associated with the conservative mind — he mentions loyalty, decisiveness, perserverance, among others — and those tied to liberalism:  flexibility, openness to new information, invention.  My problem with this is that it is not a symmetrical opposition.  Decisiveness, for example, is an attribute that can accrue to either shoot-from-the-hip types or reflective ones; rejection of valid information or the disdain for expertise is not.  I can guess at what Chris might say, but I’m not sure…so I plan to ask.

That said, the most important part of the conversation, I expect, will be on what to do about the very real problem that the Republican Party now resembles nothing so much as King Canute’s court.  Chris has long argued for better framing of liberal and pro-science arguments, and in this book he points at the need to couch fact in great stories.  He doesn’t go deeply into this — most of the book is laying out the case for the reality of material differences of mind and brain between the ends of the political spectrum — but I think he’s right, and I want to go deeper into what that might mean.

In any event, check out the book, and come listen in (or the other way round).