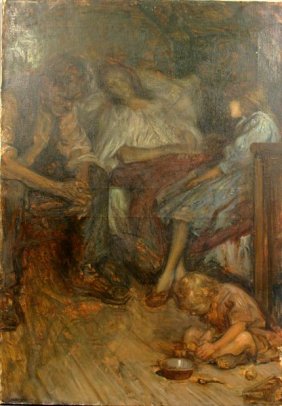 Greetings from a hospital room in Northern Florida. I’m not the patient. I’m taking the night shift of a tag-team family vigil at the bedside of our 95-year-old matriarch, who had some sort of episode that rendered her battier than usual. We’re not sure if it’s a reaction to a new medication or some sort of brain malfunction. In any case, she bears more watching than the nurses can provide.

She’s a tough old bird, so I suspect she’ll pull through. She was lucid enough to hassle me about my slovenly appearance, which is an improvement over talking to hallucinations. When I get home, I’m going to instruct my daughter to drop me off at the peak of the Skyway Bridge with a stepladder on my 90th birthday, if I make it that far.

Since I’m on the road and knew sitting around a hospital room all night watching an old lady sleep with no wi-fi would drive me batshit, I bought one of those hotspot thingies from Verizon. What a fucking rip off! At the rate I’m going (a few hours of dealing with work emails and general web surfing – no movies, gaming or video downloads), I’m going to burn through $100 bucks in prepaid data charges over the next few days. Any pro-tips from the well-traveled?

END_OF_DOCUMENT_TOKEN_TO_BE_REPLACED

The last couple of days of the Christie/Obama dynamic is one of the most interesting things I’ve seen in a while in politics. Adding to what I wrote this morning, I think that Christie’s supposed emotional outbursts are actually pretty calculated, and that’s even more reason why he should be taken seriously as a politician. So when I read shit like this, from Jeffrey Goldberg, I have to laugh:

2016 is Christie’s year, but not for the reason Goldberg gives. It’s pretty clear that there’s no place for Christie to go from being New Jersey’s governor. Lautenberg is going to retire in 2014 if he doesn’t die first (he’s 88), which means that Christie is out of phase to get that seat, since he’s up for re-election in 2013, not to mention that it’s a real long shot. Being a Fox News personality or some other wingnut welfare recipient would be death to his attempt to run as a reasonable Republican. It’s not impatience dictating that he run in 2016, it’s electoral reality.

It’s typical for DC pundits to look for a single reason for everything. In this case, it’s Christie’s emotions, and Goldberg is just wondering about which irrational neurons are firing in Christie’s brain. But in the actual world, it’s possible for the following propositions to be true at the same time:

1. Christie is genuinely concerned about the people of his home state, and moved by their suffering, and he wants to do everything he can to help them.

2. Christie realizes that his political future lives or dies on the basis of his administration’s response to Sandy so he’ll do whatever he can to get the maximum federal response..

3. Christie enjoys fucking over his rival Mitt Romney by going overboard in his praise of President Obama.

END_OF_DOCUMENT_TOKEN_TO_BE_REPLACED 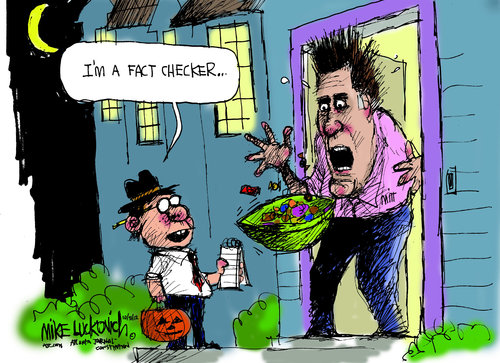 (Mike Luckovich via GoComics.com)
__
Or should that be “cowardly chickenshits”? In any case, your modern Republicans…

The Milwaukee Journal-Sentinel reports that the vulture capitalists who bankrolled those ‘VOTER FRAUD IS A FELONY’ billboards have been outed:

Stephen Einhorn – a Wisconsin venture capital fund manager and major GOP donor – disclosed Monday that he and his wife, Nancy, paid for dozens of anonymous billboards in and around Milwaukee and two Ohio cities warning residents of the penalties for committing voter fraud. Democrats and civil rights groups complained that the signs – which were taken down last week – were concentrated in minority neighborhoods and intended to suppress the election turnout…

“Perhaps their Chicago public relations firm could answer why the Einhorns only felt it was necessary to target legal voters in minority communities, and why they didn’t feel the need to do this ‘public service’ throughout communities across Wisconsin where a majority of the residents are white,” Ross asked in his email. “Or put their name on it, rather than hiding behind the cowardly veil of anonymity.”

Last week, conservative talk show host Charlie Sykes posted an item on his blog reporting on an interview with the head of the then-anonymous family foundation behind the billboards.

Sykes said the foundation chief was given the option of disclosing his family’s identity or taking down the ads. After initially considering releasing the family’s name, Sykes wrote, the foundation’s leader opted to pull the billboards because he was “reluctant to put his children and grandchildren at any risk.”

The Washington Post reports that Virginia Senate candidate Jason Flanery, of text-spammer ccAdvertising, seems to be up to his old tricks:

RICHMOND — A week before Election Day, Democrats have taken legal action to try to stop thousands of unsolicited text messages encouraging people in Northern Virginia to vote against their candidates.

A lawyer for the Democratic Party of Virginia wrote to ­ccAdvertising, a political phone and text-messaging vendor with a history of sending unsolicited messages, whose chief operating officer, Republican Jason Flanary, is running for Senate in Fairfax County. And a local Democratic activist, Ruth Miller, filed a lawsuit in Fairfax County General District Court on Monday.

Others who received texts have contacted the office of Attorney General Ken Cuccinelli II (R), the Virginia Department of Agriculture and Consumer Services, and the Federal Communications Commission…

FreeEats, the parent company of ccAdvertising, has been fined for similar conduct in North Dakota, according to news reports. Americans in Contact political action committee, which lists Flanary as executive director, has been tied to unsolicited messages in other states, including North Carolina, Illinois and Pennsylvania, according to published reports.

Both companies have given in-kind services to Flanary’s campaign, according to the Virginia Public Access Project, a nonpartisan tracker of money in politics. Many other Republicans in Virginia also employ ccAdvertising….

And, via Paul Constant, ThinkProgress reports that the Romney campagain has asked Donald Trump to campagain for his (no)soulmate:

… Trump will be doing robo-calls in Ohio, North Carolina, Wisconsin, and Florida — crucial battleground states. The campaign also reportedly asked him to do campaign stops, which may conflict with the taping of his show, “Celebrity Apprentice.” Romney has embraced Trump’s support in spite of his widely ridiculed belief that the president was secretly born abroad… The billionaire also scoffed at the devastating storm that submerged New York and New Jersey, saying, “Hurricane is good luck for Obama again – he will buy the election by handing out billions of dollars. Not only giving out money, but Obama will be seen today standing in water and rain like he is a real president —don’t fall for it.”

How are the mischievious little ghouls, and also the trick-or-treaters, doing in your neighborhoods tonight?

END_OF_DOCUMENT_TOKEN_TO_BE_REPLACED

I know this is shooting fish in a barrel, but Andrew — really?

On a personal level, my wonderful introduction to New York City continues. We’ve had no power since Sunday night, and no idea when that might end…

I’m blogging today from a midtown Starbucks, where every available electrical outlet is being used by displaced downtowners. The atmosphere around me is probably like rush-hour in Calcutta. I want to thank my colleagues, all of whom have electric power, for doing such an amazing job yesterday and today. And my love to New York City, which has instantly plunged me from the developed world into a pitch black and increasingly cold Halloween. I keep saying to myself: It Gets Better.

Well, it cannot get any worse, can it? Can it?

Does one need to add anything?

Dude.  Your new home town just experienced a four meter storm surge on top of a full-moon high tide driven by hurricane force winds sweeping through a low lying port.  That doesn’t happen very often.  When it does bad things follow…but it’s not personal.  God — not yours, not anyone’s — doesn’t actually care about you enough to gin up a regional disaster just for the comedy gold to come from watching you kvetch about New York.

And as for that Calcutta nonsense? 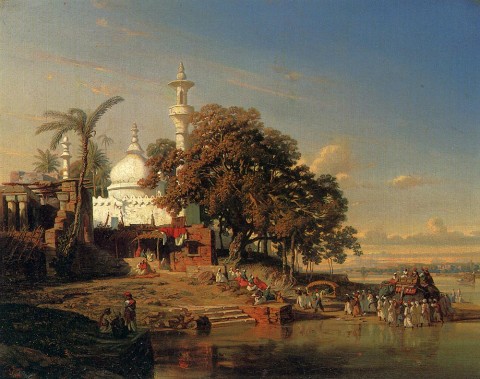 Here I lose my sh*t just a little.  Mr. Sullivan, you child of first world ease:  you have no f**king idea how insanely fortunate you are.

I would go off more on that — but the sheer embarrassment of having to be the person who wrote something that purely inane is sufficient punishment, I think.

*quote stolen from a long ago  Nynex Yellow Pages ad, back when we had Yellow Pages. I can’t remember what heading they were punning upon, but maybe someone here does…ETA:  and somebody does.  The heading was “Vanity Cases,” and  here’s the video. Thanks to The Pale Scot.

Image: Auguste Borget, An Indian  Mosque on the Hooghly River near Calcutta, 1846.

END_OF_DOCUMENT_TOKEN_TO_BE_REPLACED

The polling in the last couple of days has all gone the President’s direction.  Of course, 538 and the Princeton Election Consortium have it decisively in the President’s favor the last several days.  Princeton reported this morning (before the site went offline) that the re-election likelihood was 93% for the random distribution, and 98% for the weighted calculation.

I’m trying not to get too excited.  I’m trying to keep perspective, but it looks, from reports out of Michigan and Ohio, that the whole “lying about car production” and the fake relief rally have both hurt Romney in the region.

Now it’s time for the final argument.  If there’s anyone out there that any of you know that is still undecided, or uncommitted at this point, please, please refrain from choking the ever-living shit out of this person, and make this final argument:

Some of the aforementioned polling:

NYT/CBS: Obama up 5 points in Ohio, 2 points in Virginia, and 1 point in Florida.

PPP: Obama up by 5 in Wisconsin and in Iowa.

END_OF_DOCUMENT_TOKEN_TO_BE_REPLACED

I hope all our New York readers are still in one piece. Not because I care about them, but because I’m still planning a Balloon Juice get together on the afternoon of November 11.

What’s a good place to meet? We did a place called Walker’s in Tribeca and another called McGee’s on the upper west side. Walker’s was homier, and had food, but McGee’s was cheaper.

The big question for me is: which area is better for people to get to, considering that the subways may still be compromised? And which area itself will be most back up-to-speed by then? I’m guessing Tribeca was more likely to have been flooded since it’s farther south.

Should we consider some other place? I’m open to anything.

Remember: we’ll be celebrating an electoral victory. Or mourning four more years of liberal betrayal by a Democratic president.

END_OF_DOCUMENT_TOKEN_TO_BE_REPLACED

You know the drill.

Bobo/Lane/other VSPs: the limits of prediction, numbers can’t tell us everything.

“Look, the city is extremely vulnerable to damaging storm surges just for its geography, and climate change is increasing that risk,” said Ben Strauss, director of the sea level rise program at the research group Climate Central in Princeton, N.J. “Three of the top 10 highest floods at the Battery since 1900 happened in the last two and a half years. If that’s not a wake-up call to take this seriously, I don’t know what is.”

With an almost eerie foreshadowing, the dangers laid out by scientists as they tried to press public officials for change in recent years describes what happened this week: Subway tunnels filled with water, just as they warned. Tens of thousands of people in Manhattan lost power. The city shut down.