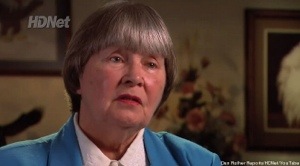 Welp, lucky for us, Marion Hammer has thrust the NRA back into news. Hammer, ex-president of the NRA and Kathy Geiss impersonator, gave a TV interview during which she compared gun control to racism.

Appearing on an episode of the NRA news show The Daily News on Wednesday, Hammer concluded a discussion of the prospects on gun control initiatives prompted by the Newtown, Conn. massacre by drawing a comparison between attempts to ban guns and racism.

“And they even admit this is about banning the ugliest guns, it’s about cosmetics and it has nothing to do about how a firearm works,” host Ginny Simone said toward the end of the segment.

“Well, you know, banning people and things because of the way they look went out a long time ago,” Hammer responded. “But here they are again. The color of a gun. The way it looks. It’s just bad politics.”

Guns have it pretty rough in this country, especially scary black guns. We should start with some common sense solutions — like increasing diversity in gun manufacturing. Maybe we should set some quotas.

This discrimination must end.