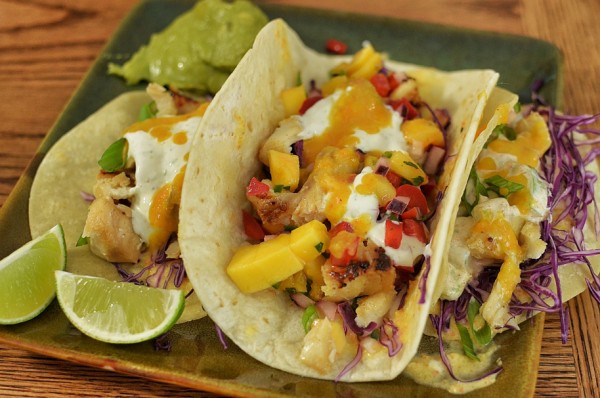 I was planning to put together a salad for dinner on Wednesday after a long day, but when I looked around I had all the ingredients for tacos and that inspired both dinner that night and tonight’s recipe exchange.

For my tacos that night, I used homemade fajita seasoning (recipe for seasoning and fajitas here) instead of packaged taco seasoning. The recipe makes a lot, so I always have some on hand.

On the taco front, not to be missed are JeffreyW’s awesome Fish Tacos (pictured above, recipe and photo directions here).

Earlier in the week, an excellent and creamy, sharp goat cheese was the center piece of my Stuffed Burgers (recipe here) for dinner. So easy to make and full of juicy flavor.

The Dinner Menu was a given, since Olathe Sweet Corn finally arrived in stores. This menu was also the first one I put together many years ago, because it was and still is, a summer staple. Menu, recipes and shopping lists here.

For the pet lovers, here’s Bixby awaiting our lunch guests and a bonus Greek Pasta Recipe.

With that I leave you to the comments. Tacos, burritos or fajitas, what’s your favorite? And what’s on your weekend menu as we move into the last month of summer?

END_OF_DOCUMENT_TOKEN_TO_BE_REPLACED 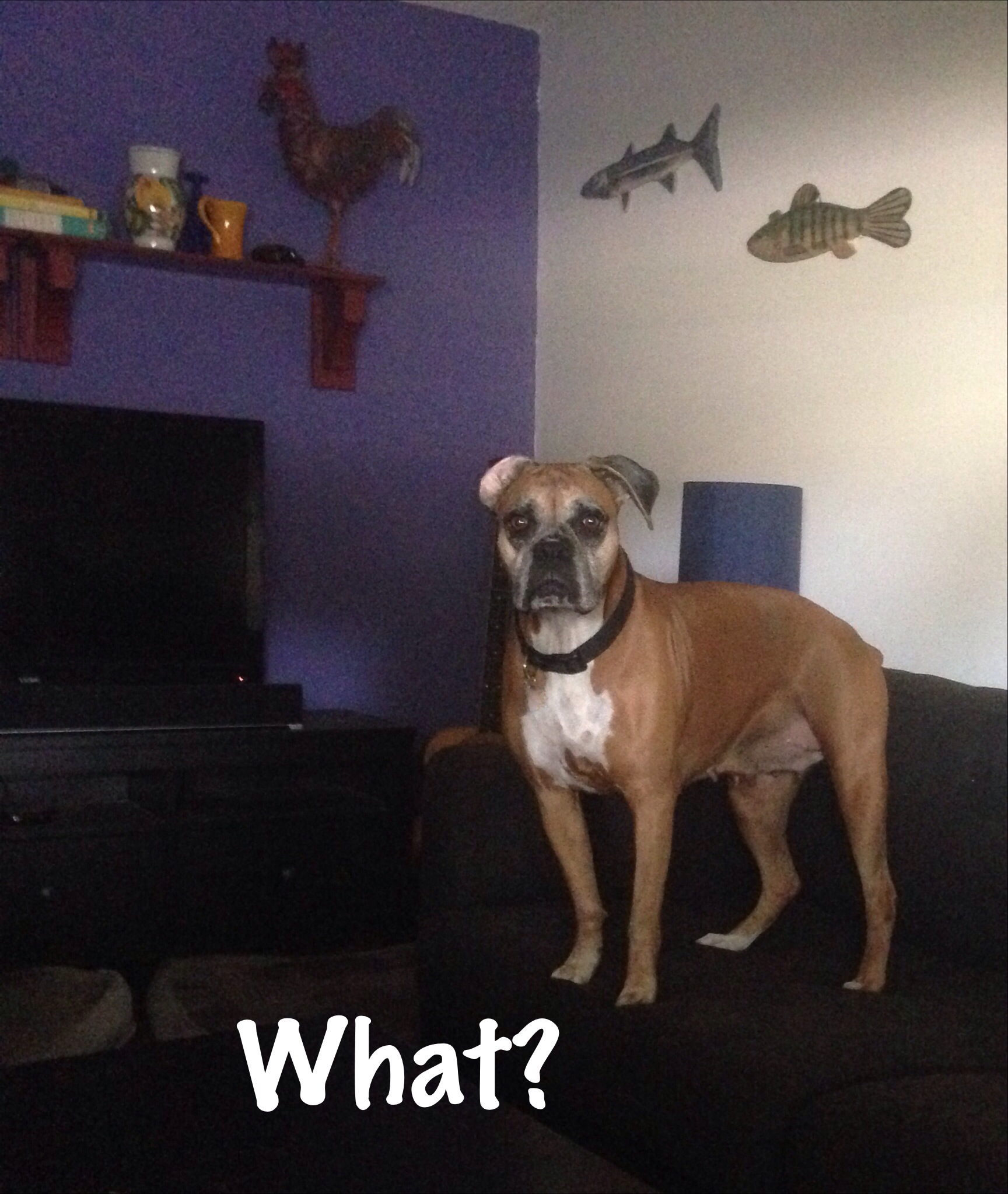 I could swear life used to be much more exciting. Tonight we’re hanging out at the tiki bar, looking out at the sodden yard and listening to Cajun music (Beausoleil).  You?

END_OF_DOCUMENT_TOKEN_TO_BE_REPLACED 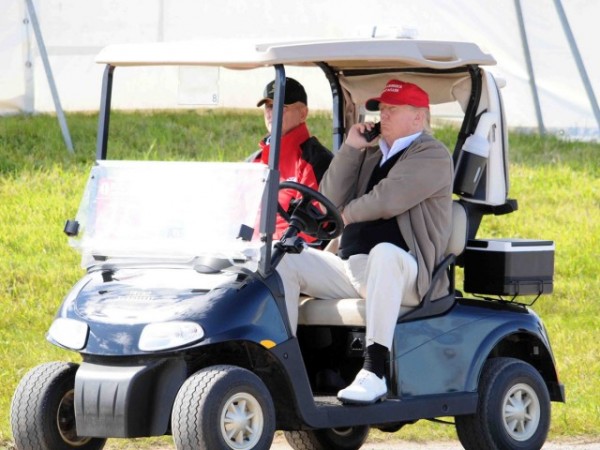 The Trump on his potential election and the worldwide reaction:

Donald Trump said Thursday that he would unite the world should he become president, downplaying his penchant for controversy during a trip to Scotland.

Left unsaid is that they would unite in revulsion. See also Bush.

END_OF_DOCUMENT_TOKEN_TO_BE_REPLACED

Firedoglake is no more. I have mixed feelings about FDL. Lots of great writers, like TBogg and Marcy Wheeler and David Dayen, got their start there. But some of Jane Hamsher’s stunts were a bit much.

I like to think Balloon Juice is still going strong. And on that, note, if anyone is interested, I’d like to propose a Balloon Juice meet-up in DC next Thursday. I’ll be in the northwest, kind of near the zoo, so Adams-Morgan would probably work. Any suggestions for good spots?

END_OF_DOCUMENT_TOKEN_TO_BE_REPLACED

I don’t find myself able to understand issue having to do with the Middle East very well, but I’m struck by the insanity of the opposition to the Iran deal. Actual nuclear experts love the deal. Even many unrepentant Iraq war hawks favor the deal on balance. The opposition to the deal comes almost exclusively from hard-core neocon dead-enders like Jackson Diehl and David Frum.

Unfortunately, hard-core neocon dead-enders have a lot of influence on our political process, and Congress may scuttle the deal. Call your Congressperson and Senator and tell them to pass the damn bill. We can’t let the same idiots that got us into Iraq get us into Iran. It’s probably not even fair to say “the same idiots”, we’re really talking about an elite group of super-idiots from within the group of idiots who got us into Iraq.

END_OF_DOCUMENT_TOKEN_TO_BE_REPLACED

In one of the first police brutality cases to use body camera footage, former police officer Ray Tensing has pleaded not guilty to the July 19 shooting death of Sam DuBose. His bail was set at $1 million which resulted in applause from some of the courtroom. The outrage of Tensing’s actions has been loud:

Hamilton County Prosecutor Joe Deters announced the charges at a news conference this week. “I’ve been doing this for over 30 years. This is the most asinine act I’ve ever seen a police officer make — totally unwarranted,” he said. “It’s an absolute tragedy in the year 2015 that anyone would behave in this manner. It was senseless.”

Team Blackness talked about the case, the five black women that have been found dead in jail since mid-July, and the never-ending outrage that is Cecil the lion’s death.

END_OF_DOCUMENT_TOKEN_TO_BE_REPLACED

And I say “No, no, no” to this Cincinnati Enquirer article on how Officer Ray Tensing, the UC cop that shot and killed Sam DuBose, is such a nice guy.

The son of a suburban firefighter, Ray Tensing followed in his father’s footsteps toward a career in public service.

Tensing was hellbent on becoming a cop, joining a police officer youth program while attending Colerain High School and eventually reaching the Ohio State Highway Patrol by his early 20s – if only for a day.

By many accounts, Tensing enjoyed his job and was good at it. Then it all went terribly wrong around dinnertime on July 19, when Tensing shot and killed an unarmed man while making a traffic stop in Mount Auburn.

Many who know the 25-year-old Tensing remain perplexed about what caused him to fire a bullet into Samuel DuBose’s head.

“I just want people to know this guy is not a monster,” said Kevin Coombs, who coached Tensing in baseball as a teenager. “That doesn’t mean he didn’t screw up, but this is not a cop out in L.A. stomping on Rodney King.”

Jesus I hate the Enquirer and sometimes I really hate this town.  Sometimes I’m painfully reminded why John Boehner hasn’t had a real challenge around the suburbs north of here in 25 years.  There’s nothing “perplexing” about why Tensing blew DuBose’s head off, because he was a scared trumped-up bully with a gun who thought he was being disrespected and slaughtered a guy out of a combination of rage and fear.

As a teenager, Tensing received praise for his dedication to learning about law enforcement in the Hamilton County Sheriff’s Explorers Program.

After graduating from Colerain in 2008, Tensing attended Ohio State University before transferring to UC Clermont’s police academy. Tensing went on to receive his bachelor’s degree at the main UC campus, graduating with honors in spring 2012.

Still, Hamilton County Prosecutor Joe Deters said Tensing “should have never been a police officer,” but has declined to elaborate on that claim beyond discussing the DuBose shooting.

“I don’t think this man has a clue what he’s talking about,” said Justin Shereen, who was in the Explorers Program with Tensing at Colerain and still occasionally hangs out with him. “Ray took his career very seriously. He was a great police officer.”

Except for the part where he murdered a black man in cold blood and then he and his fellow “great police officers” tried to cover it up, and would have gotten away with it without the body camera footage.

I need a drink and it’s not even noon.

[UPDATE] I need several drinks and it’s not even one PM.

To be fair, it reads like the two other cops are in effect backing up the events on the body camera footage now. No charges for them in order to testify against Tensing, maybe?