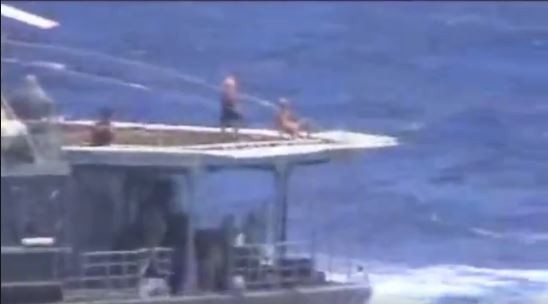 The Russian destroyer Udaloy I forced the USS Chancellorsville to maneuver to avoid collision in the Phillippine Sea today. They were sending a message – look at the guys sunbathing on the flight deck.

BREAKING: #USNavy has released video of #USSChancellorsville being forced to maneuver to avoid collision, after #Russian destroyer Udaloy I made an unsafe and unprofessional approach in the Phillippine Sea, June 7th. (1/2) pic.twitter.com/HpmAMtYraS

BREAKING: #USNavy has released video of #USSChancellorsville being forced to maneuver to avoid collision, after #Russian destroyer Udaloy I made an unsafe and unprofessional approach in the Phillippine Sea, June 7th. (2/2) pic.twitter.com/bM9ZHuYSUM

The maneuver was planned and approved by the fleet. Probably at the suggestion of Vladimir Putin, or certainly to please him.

If the ships had collided, Russia would have screamed that it was all the fault of the American ship.

The Russian government has been cranky this week over the observances of the 75th anniversary of D-Day. The Allied landings on Normandy beaches were the beginning of the end of Germany’s Western Front.

Russia would like to have a word about that. Russia defeated Germany’s Eastern Front, at enormous cost. The message the Russian government was trying to get out was that it was the eastern front that was really the defeat of Hitler. Further, Russia is owed bigtime by the rest of Europe for that.

The Russian role in World War II is often minimized in Western versions of the defeat of Hitler. Russia suffered enormous losses.

But the Russian role is not unambiguous. In 1939, the Soviet Union signed the Molotov-Ribbentrop Pact to fight together with Germany and divide up the parts of Europe between their then boundaries after the victory. That assured Hitler that he could concentrate on the Western Front and invade France and adjacent countries while bombing the UK. Without the Molotov-Ribbentrop Pact, and with the USSR solidly standing with the rest of Europe, Hitler would have had to think twice.

Hitler double-crossed Stalin, of course, by invading Soviet territory in 1941. That forced Russia to fight on the side of the Western allies. Russia could have put up a better fight if Stalin hadn’t purged the generals in 1937. The Soviet military was in disarray, allowing the German army almost to reach Moscow.

Meanwhile, bombing on the Western Front weakened Hitler, and American Lend-Lease strengthened the Soviets. But a competition remained: Soviet spies were sending the plans for American nuclear weapons to Moscow, and there was a race in the Far East to occupy Japan first.

But Russia wants the story to be of the damage it survived and went on to help the Allies win. That is true, but it is only part of the story. Adam Elkus says what I’ve just said with more snark in a Twitter thread.

For the past couple of weeks, the Russian Ministry of Foreign Affairs has been, to use Adam’s word, shitposting, like this

#Zakharova: The Normandy landings were not a game-changer for the outcome of WWII and the Great Patriotic War. The outcome was determined by the Red Army’s victories – mainly, in Stalingrad and Kursk. For three years, the UK and then the US dragged out opening the second front pic.twitter.com/LhzkEzNCQN

The anniversary of D-Day is the immediate cause, but the problem goes deeper. Russia, particularly Vladimir Putin, wants to be treated like a great power. Further, Putin has a few problems at home. His popularity is down. There are fights about provincial boundaries in the North Caucasus. People are demonstrating against accepting Moscow’s garbage in landfills in the North. He needs something to get people behind him, and what better than American hostility.

If that hostility can be combined with dissension among Americans, so much the better. So Moscow released a facsimile of the Molotov-Ribbentrop Pact a couple of weeks ago, for the first time. Moscow has refused to discuss the Pact in the past. They aren’t saying much now, but its release could spark strong feelings among Americans whose background is in the countries that suffered from the Nazi and Soviet invasions, along with western controversies associated with those Soviet actions.

Add in some dissing of D-Day to fan other fires. The mixture doesn’t make sense, and it doesn’t have to; all it needs to do is rile Americans up an several sides of several issues. And irritate them at Russia, so that they will generate commentary that can be used to show the Russian people how Americans hate them.

The propaganda game was largely being ignored, so some escalation was necessary, hence the incident in the Phillippine Sea. This is genuinely dangerous because it could result in a collision and perhaps escalate further. The sunbathers are essentially offering a middle finger to the United States. Putin’s, perhaps.

The incident should be demarched, but who knows what Donald Trump and John Bolton are likely to do. We could engage Russia on extending the New START Treaty. That is undoubtedly one of the things irritating Putin. Extending New START would be a good thing for both countries and the world. Negotiating a treaty with lower limits on nuclear weapons and better verification would be better, but the base we are working from is hoping that Trump and Bolton won’t withdraw from the treaty altogether.

Russia will continue its propaganda drumbeat. The purpose is to fan division in the United States and to provide material for Putin to try to ramp up his popularity. The best way to respond is to avoid division and call out trolls when they appear.

Ah, a troll who can't even read the name on the offending ship. Or figure out how the US Navy got the Russian video.