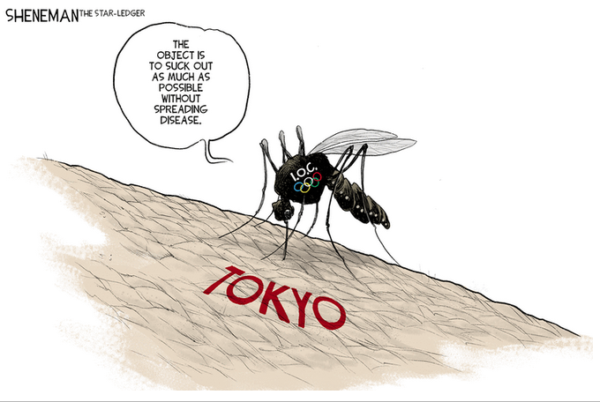 Disclaimer: I am not much of a sports fan, but I read a lot of news media. I figure anybody who wants coverage or results from the endless stream of events will find them elsewhere (h/t NotMax for the link), so mine will be a random series of links for those human interest and WTF stories that might otherwise slip under your radar.

My favorite was the comment on a tweet from the news platform that just said, “That means there ARE spectators! ??”

The Tokyo Olympics have barely started but that hasn’t stopped the games from experiencing more than its share of disturbances – including a roaming bear that cannot be contained https://t.co/273cnib6nn

IOC's Bach says he didn't know how complex it would be to stage the Games https://t.co/rDkeIW9oM8 pic.twitter.com/iuztFC3vdu

1/ NEW: It was bittersweet to write about Ted Adegawa, who helped built his town into the surfing destination it is today. First, his torch relay was canceled. Then they banned fans. Now, like everyone else, he'll have to watch the event on TV. #tokyo2020 https://t.co/NZYWyX9xqZ

3/ Ted decided to move his surf business to Isumi after he saw American soldiers surfing perfect swells there in 1970. It meant so much for him and other locals to host the Olympics' inaugural surfing event here. In anticipation of the Games, Ted even opened a tiny museum here pic.twitter.com/htd1S0Qh9w

7/ It's all very bizarre. Empty stands in towns that hoped for an Olympic boost with events only attended by dignitaries and athletes.

This year’s Olympics Games are like no other, and it’s apparent from the meticulous procedures people must go through just to get to Tokyohttps://t.co/gIkCZijpZp pic.twitter.com/BarvorHim8

Our @AFPFactCheck team debunks the no sex on Tokyo Olympics beds story.

I’ve even seen some proper media outlets run this too good to be true story, almost certainly ones that never bothered to hire a Japanese (or Japanese speaking) reporter ??https://t.co/wjqMSfzs9m

The International Olympic Committee added 18 new events in Japan in a push toward gender equity. There are an equal number of women and men for every sport, excluding baseball and softball because of differing roster sizes.

Medal count: One prediction has the US winning the most mdeals and most golds in a a wide-open Olympics.

The Tokyo Olympics open Friday and predicting the overall medal count will be more difficult than usual because of the pandemic and the absence of many qualifying events over the last year.

China is probably the next choice but many athletes from the country have appeared in few international events since the pandemic. This makes predictions difficult since Gracenote’s calculations are based on the most recent performances in top level events like world championships and so forth.

A team from Russia, host nation Japan and Britain are expected to be among the top five…

Tokyo 2020 chief does not rule out cancelling Olympic Games https://t.co/RXRkdlkYSO

Previous Post: « Repubs For Whom It Is Impossible to Feel Sympathy, Pt. II: Pandemic Edition
Next Post: On The Road – Steve from Mendocino – We Have Cats 1 of 4