You are here: Home / Balloon Juice / Sanibel: What Do You Do When You May Have Lost Everything? 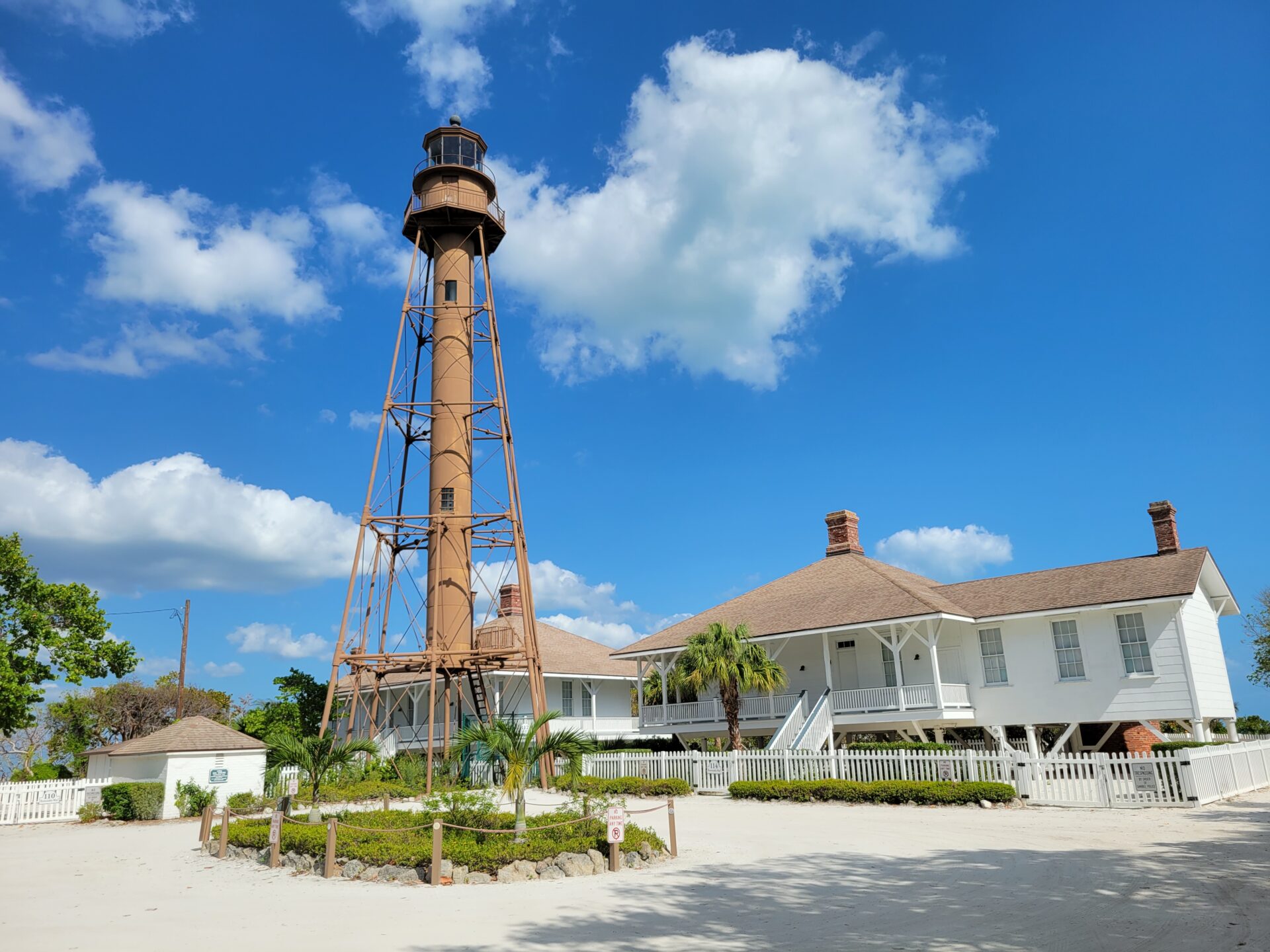 What do you do when you may have lost everything?

You grieve the loss, you pick yourself up, you put one foot in front of the other, you try to get back on solid ground, and you try to help the people around you.  And sometimes all of those things have to happen at the same time.

That’s what Jennifer is trying to do right now.

My name is J. (short for Jennifer) and I have been reading Balloon-Juice since 2007. Some of you may know me from the comments, though I don’t comment often, or from my former blog, J-TWO-O.

As some of you may also know, my husband, two cats, and I live(d) on Sanibel Island, Florida, having officially moved there a couple of years ago. And we had a spot of weather there last week.

We had planned on riding out the storm, but when things took a literal turn for the worst last Tuesday, we evacuated, taking the cats, their litterbox and some toys, two carry-on bags, a cooler of food and drink for the road, and a Dustbuster and lint roller. (Did I mention I’m OCD?)

We thought the storm wouldn’t be so bad and that we would be back on Sanibel that weekend. Silly us.

Because of our late decision to evacuate, we couldn’t find a hotel room within hundreds of miles of Sanibel. And I was beginning to panic when I reached a cousin with an empty home in Boca who allowed us to stay there for a few days. (Her husband has asthma, so she was nervous about the cats and didn’t want us to stay long.)

It took us five hours to get there in pouring rain and wind with two howling felines, but we made it. Though the weather was pretty nasty there too.

This Saturday, we decamped to a friend’s empty vacation home north of Tampa, where we are busy looking for a long-term rental within a couple of hours of Sanibel, so when we are allowed/able to go to the island we can check on our home.

For those who have watched the news, you know that Sanibel took a direct hit from Ian and that there was a significant storm surge, knocking out power and the bridge to the island, flooding homes and businesses, and leaving residents stranded and literally in the dark. In fact, all of Lee County was without power and water until this week.

To say that things are bad on Sanibel is an understatement.

Per the City, 80 percent of structures are unsafe. Lives and livelihoods are ruined. And not just on Sanibel but in surrounding areas too. The other day I read Hurricane Ian was the worst natural disaster to hit Florida possibly ever. (The worst man-made disaster to hit Florida? It’s a toss-up between Donald Trump, Ron DeSantis, Rick Scott, Marco Rubio, and Matt Gaetz. But I digress.)

A neighbor who weathered the storm took a photo of our house before she was evacuated on Thursday. It was still standing. And from the aerial photos I’ve seen, we still have a roof. A miracle. But as our house is older and not on stilts/raised, we most certainly have significant water damage. And all of our belongs and personal possessions are there, except for the few things we brought with us.

We have hurricane and wind insurance but not flood, having decided not to renew it as our house had survived multiple deluges with nary a puddle. (We completely renovated it in 2019-2020, installing impact windows and doors, new floors, and a new roof.) In retrospect, it was a bad decision. But can’t do anything about it now. And while we don’t know the condition of our house, we are luckier than most. Still.

So why am I telling you all of this? Because I’m raising money to help my less fortunate friends and neighbors and fellow business owners—and myself a little bit—and hoping my fellow Balloon-Juicers might help me with my efforts.

While of course you can contribute money directly to organizations like World Central Kitchen, by purchasing one of my books or my 2023 Sanibel Island Mysteries calendar, you will be helping both me AND those affected by Hurricane Ian as I will be donating half of the money I receive from book and calendar sales in the month of October to organizations, people, and businesses on and around Sanibel. (FYI I make between $2 and $4/book and just under $2/calendar, more if you use the referral/hot link, so I will not be getting rich off of this and will be dealing with tens or hundreds of thousands of dollars of unexpected and unplanned for expenses the next year.)

Lest you worry this is a grift, I will share with you the amount raised and where it’s going in November.

Thanks in advance for your help.

I asked J. if she could include some photos, and she graciously agreed, though I am sure it’s bittersweet at best, and heartbreaking at worst, for her to see the images of life BEFORE.

This is a display of J.’s books at MacIntosh Books on Sanibel, where she typically held her book launches and book signings. 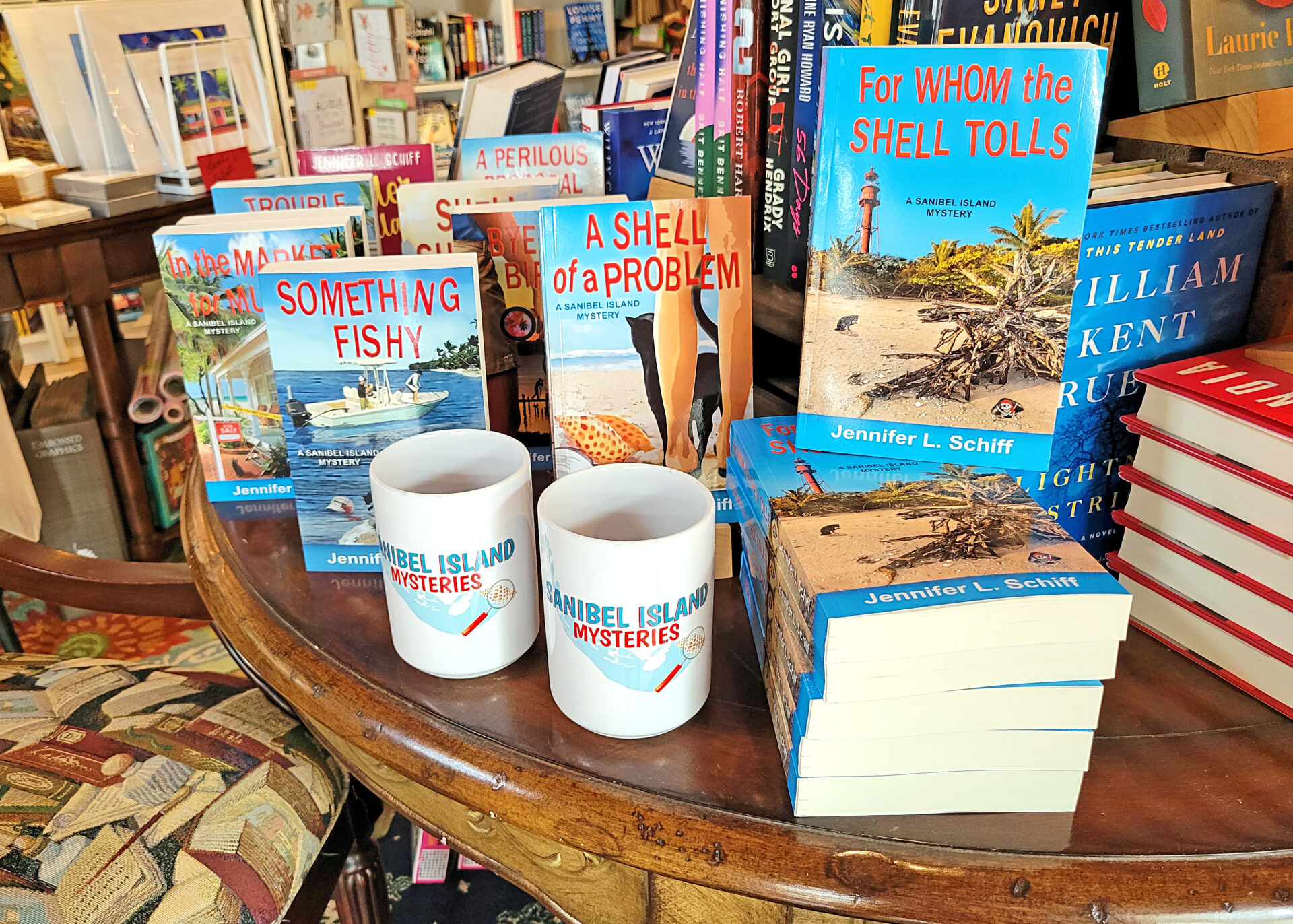 The store is still standing, mostly, but there is likely water damage.   Jennifer very recently held a promotion/fundraiser for the store on her Sanibel Island Mysteries Facebook page — and will be doing more to help the owner as well as other small business owners on Sanibel.

I suggested a GoFundMe, but Jennifer’s answer was a hard no.  She would rather have people buy her books and her Sanibel Island calendar.  She hopes that we can encourage others to buy them, too.  J. said that is better for her in the long run.

I am only guessing here, but I think that’s because J.’s books have sold really well, but nearly all of the sales were on Sanibel, and I think it’s fair to say that no one will be buying books on Sanibel for the foreseeable future.  So if her book sales crash, too, that will be one more leg of the stool of her life that will come crashing down.

To borrow a phrase from TaMara, if anyone wants to take this opportunity to shrug and say that’s what you get for buying a house in Sanibel, or to assign blame in any way in this thread, I will cut you.  If those are your sentiments, then please keep them out of this thread.

One last thing.  As recently as this morning, J. thought she and her husband were going to be able to reach Sanibel by boat so they could see their house – as heart-wrenching as that will be – to assess the damage.  They just got word that the Coast Guard has just shut down the marina to private traffic, so they are clearly stuck in hellish uncertainty for awhile longer.

So this is J.’s story, and there are thousands of people on Sanibel Island who need help, too.  J. will be donating half of her share of the profits from book and calendar sales to organizations helping others in Sanibel, and in November, she will share with us the amount raised and where it’s going.

Thousands of people having the worst days/weeks/months of their lives.  Wishing J. and her husband, and everyone hit by Ian, all the best.