More on the 10 kittens, and photos!

Laura titled this The Kindness of Strangers!

WaterGirl, in her infinite patience with Luddites, offered to post a second installment in the Hartstene Island Kitten Rescue epic, so here goes:

I am trying to find homes for ten kittens.

The ten kitties are eating, pooping, playing, sleeping and practicing their winsome cuteness skills in hopes of finding the homes their moms and dads never had. They come from a property where a kind lady fed a few stray cats and tried to get them fixed, but couldn’t keep up with their reproduction. When I found out about the situation, there were thirty plus cats on the property. A friend and I are trapping the adults, getting them fixed, and placing them in barns through BarnCats.

I am a volunteer at a sanctuary for unadoptable cats. It is not an official charity. The sanctuary is a series of cottages with enclosed yards which the owner built to house the overspill of feral, elderly, and sick cats from a local cat rescue. The kittens are in large ferret cages in one of the cottages, They can’t live at the sanctuary for the rest of their lives; there isn’t room, and besides they are adoptable!

The lady from Kitten Rescue came out and dewormed the kittens, gave them their first shots, cleaned their ears, and figured out what sex they all are.  “Phoebe” and “Spice Girl” are boys.

So here are the kitties:

Sammy is a Siamese mix. He was nearly dead when I found him curled up on a pile of garbage. He is now a sweet, happy, bouncy kitten with cream and brown fur and blue eyes. Very playful! 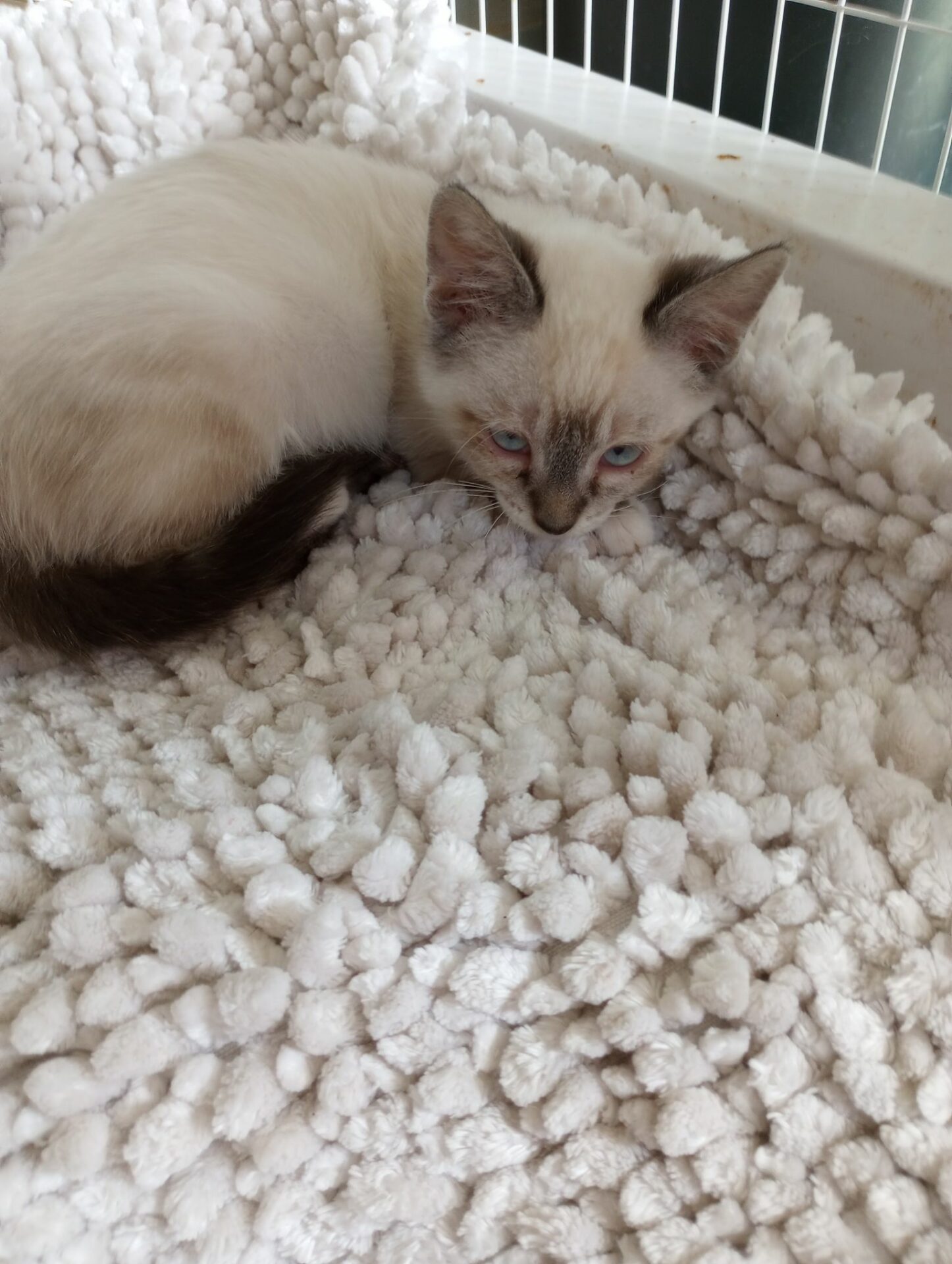 Muffet is the sweetest of all the kittens. A gentle, unassuming animal, she tends to withdraw, but she loves a cuddle and has a loud purr. Her fluffy fur is black, and she has white toes.

Ashley is the runt. A tiny kitten, she is a tabby with white markings. She is very cuddlesome and frolicsome. It is funny to watch her trying to get the bigger kittens to play with her. They mostly leave her alone because she is so small. She is very well socialized to humans. 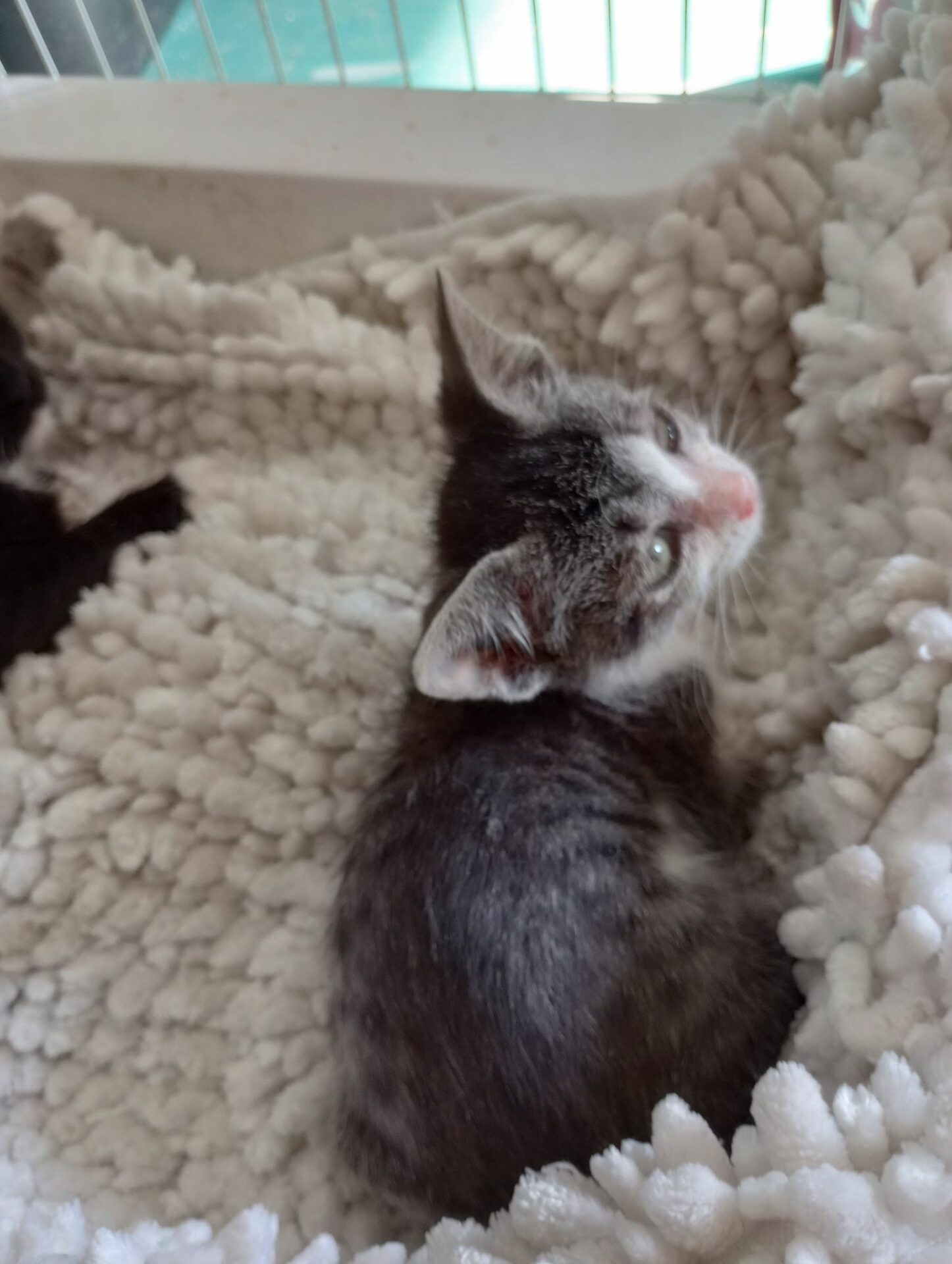 Phoebe is her sibling and nearly identical to her but a size larger. BTW, I don’t know for a fact that they are girls. They are too young to tell yet. Phoebe is shy with humans she doesn’t know.  Vet visit: Phoebe is a boy. 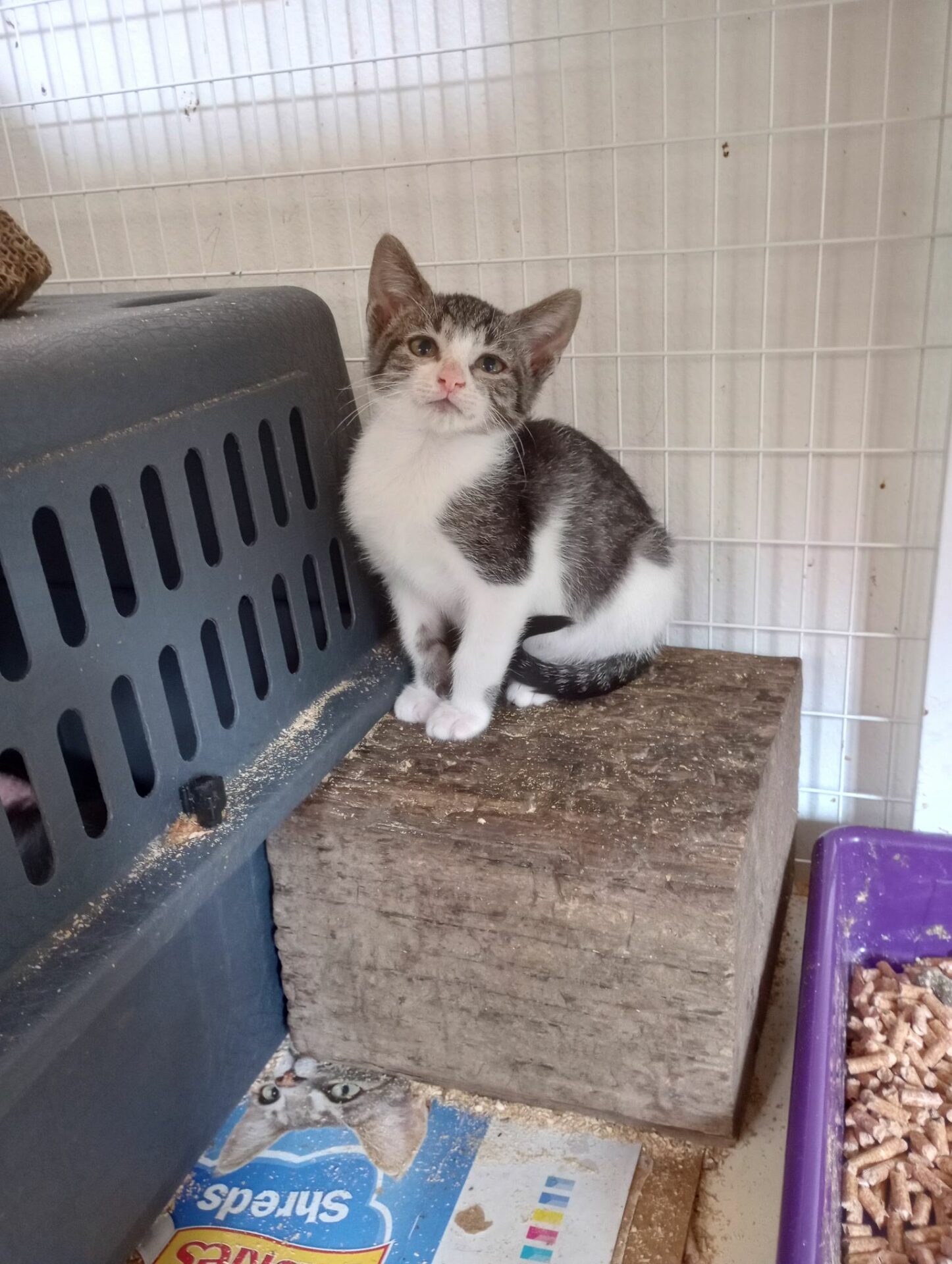 Wally the Walrus is the biggest and the bounciest. He was feral at first and hissed at me. I have been working with him, and he now acquiesces to being held. I think in the right home he will become a loving cat. He is a dark, nearly black tabby with white markings. 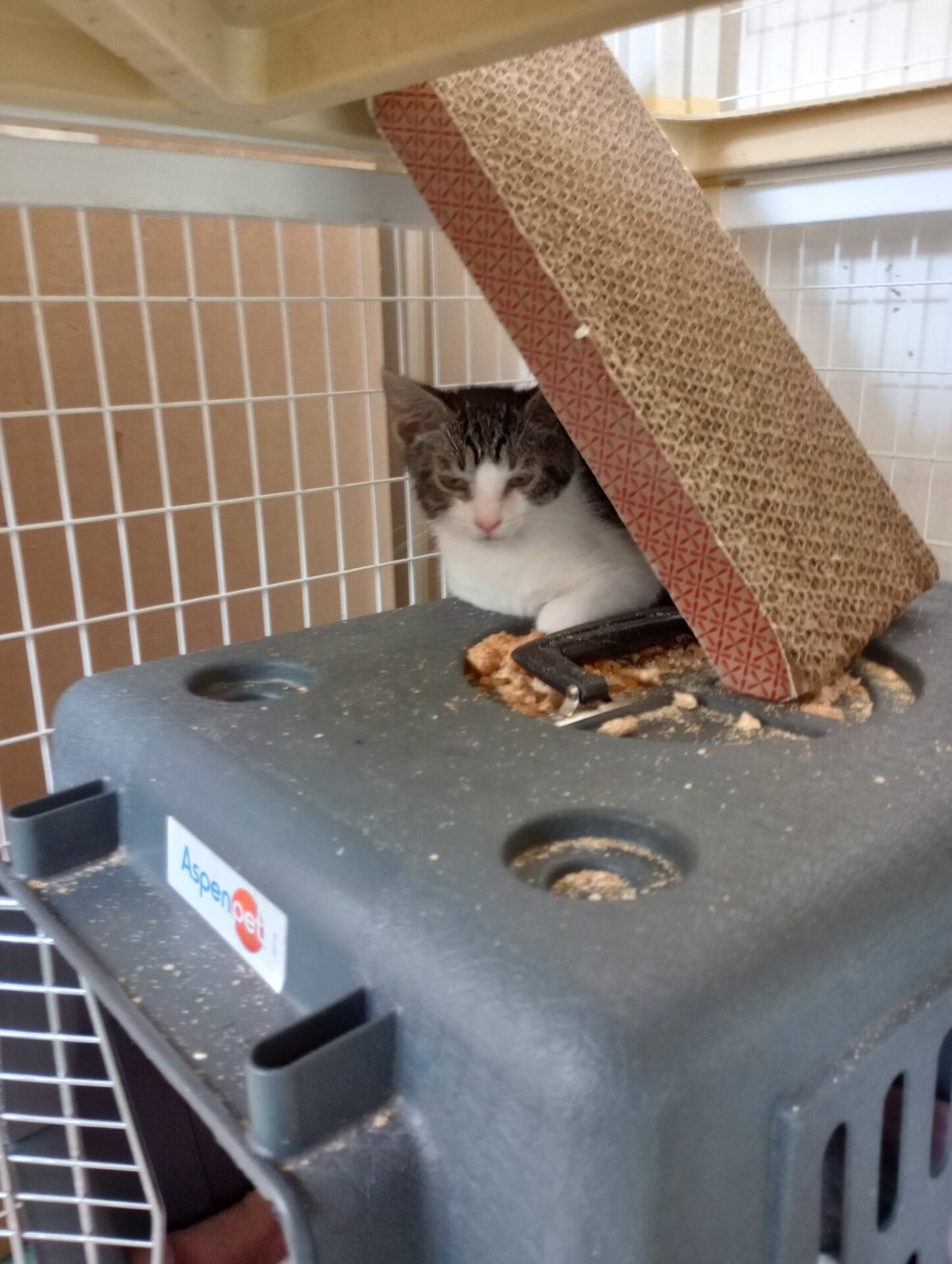 The Dustbunnies are a pair of runts. Dusty has fluffy gray fur and Bunny is a fat round little guy, also with gray fur but not fluffy. They are socialized to people. Even though they are small, they are eating kibble and playing and seem healthy. 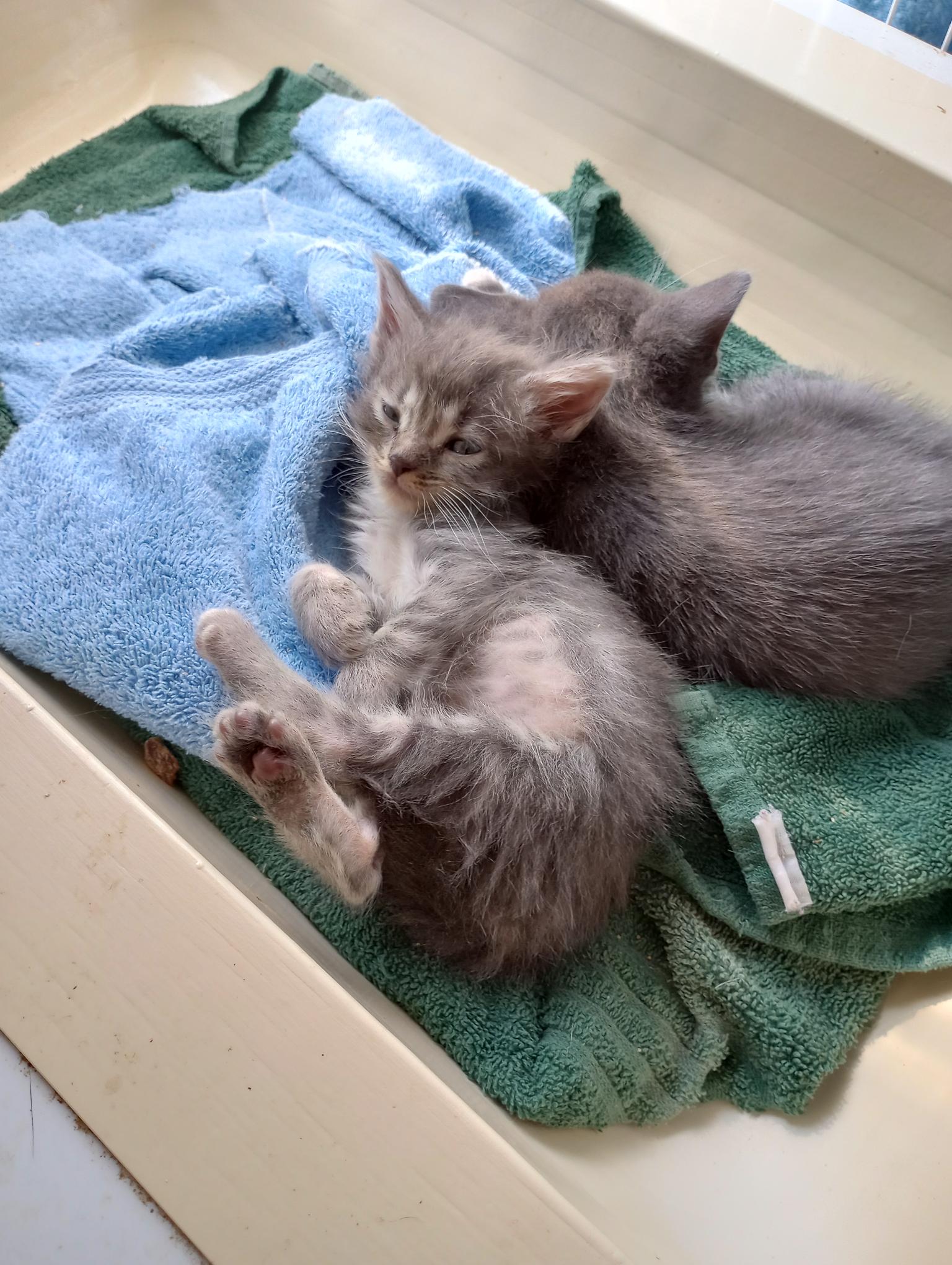 The cream twins. These two beautiful kittens have cream-colored fur and blue eyes. I don’t know their gender. They are well socialized. 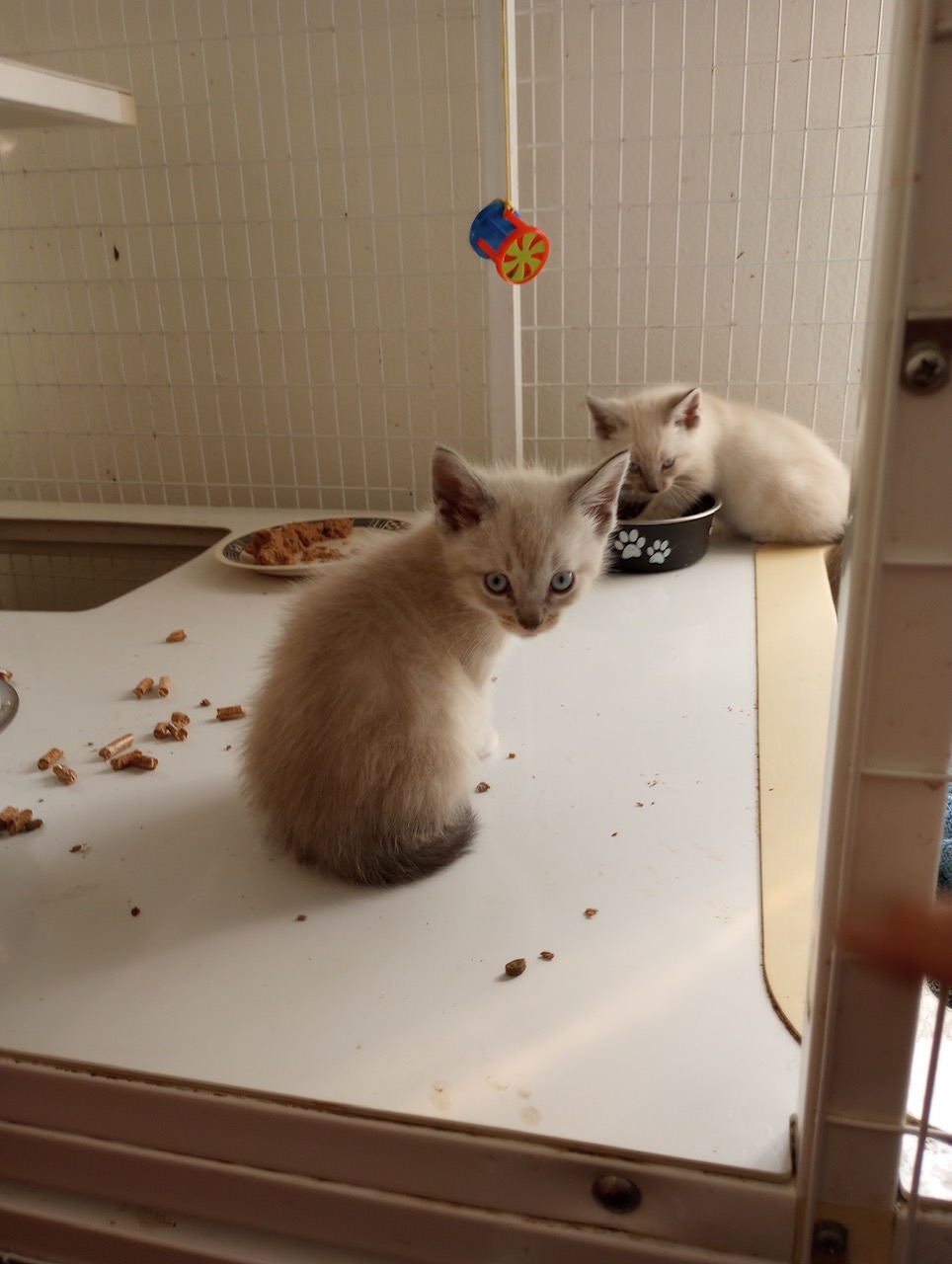 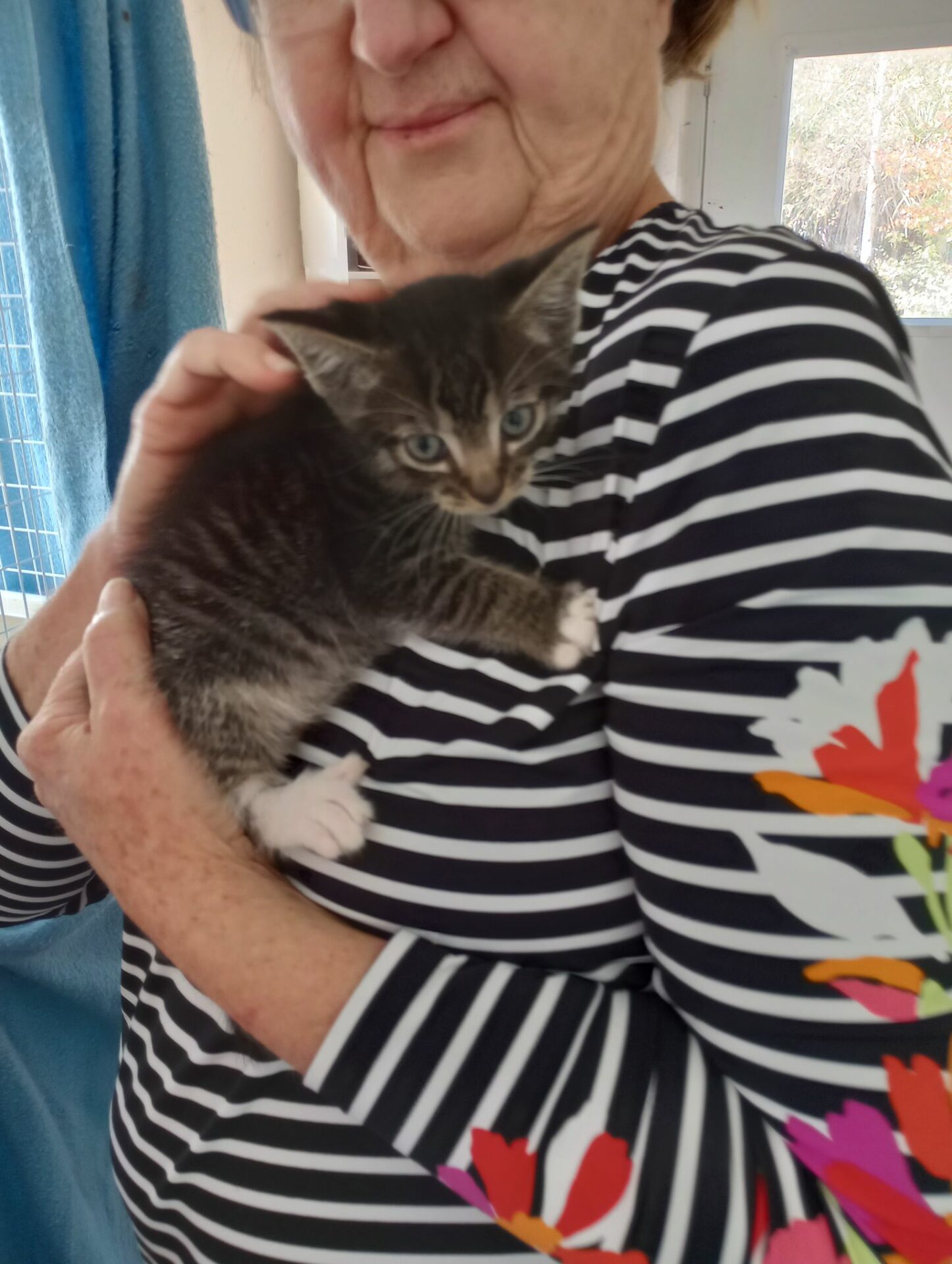 Here are 3 of Sammy’s kittens. 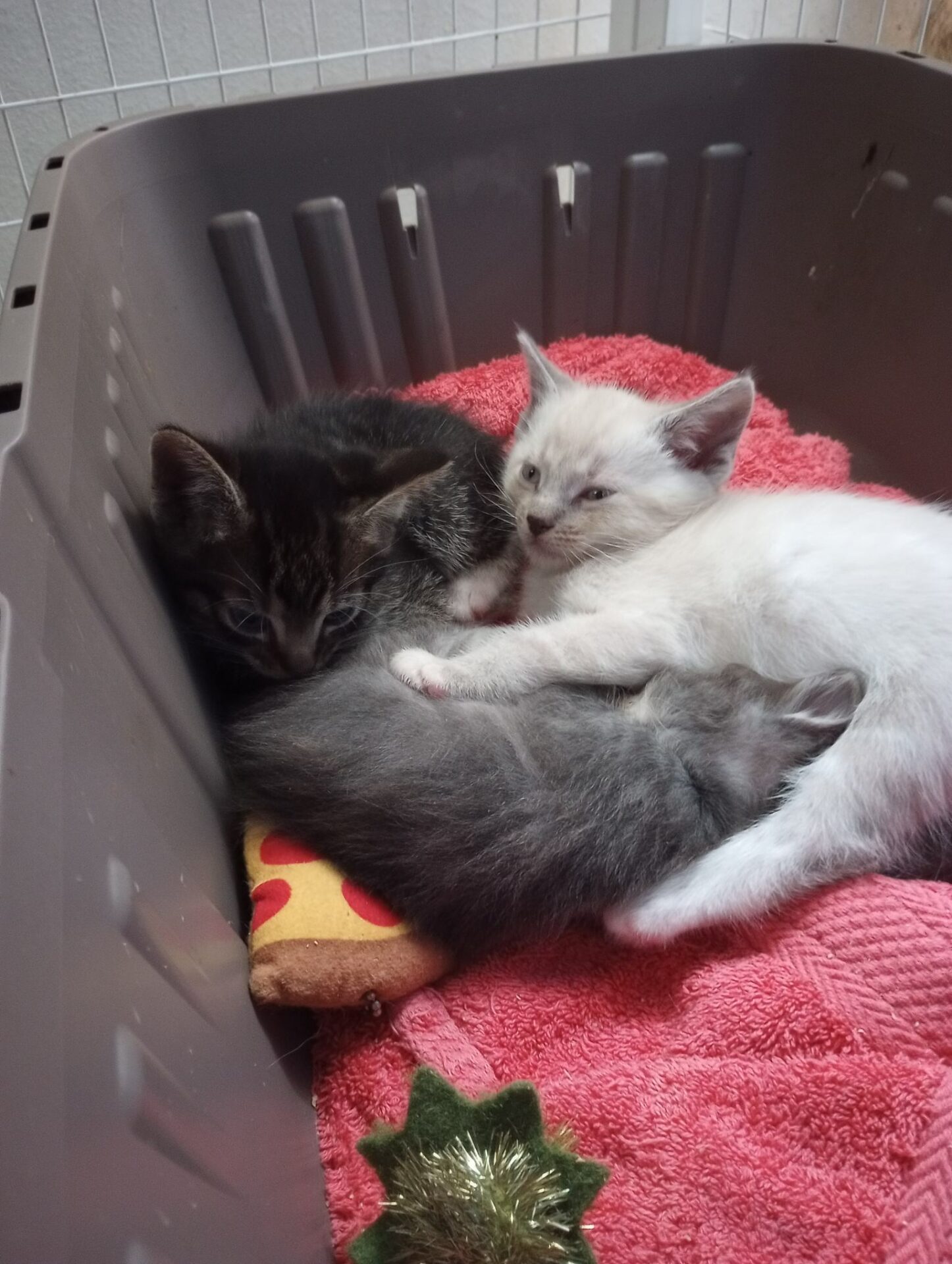 None are ready to place yet, though Sammy, Muffet, and Wally are close. I prefer to get them fixed first but will enturst them to the care of people who have a vet that can vouch for them and a track record of preventing their pets from having babies.  I would prefer to place the kittens as pairs: Sammy and Muffet, the Dustbunnies, the cream twins. Wally and Spice Girl seem to be confident enough to place alone.

Speaking of kindness of strangers, Laura and her husband were kind enough to make a donation toward the kittens’ care. I appreciate their support! And I am very grateful to WaterGirl for coping with my incompetence with texting, messaging, sending photos etc.

Mason Co WA, where I live is overrun with homeless animals. Kitten Rescue, a local group that has been very helpful with supplies, has 100 kittens on their premises to place! Clearly, to find homes for the kittens in my care, I need to reach outside of Mason Co. That’s why, dear Bjers, I am hoping some of you are in need of a cat. Or two. Or three.