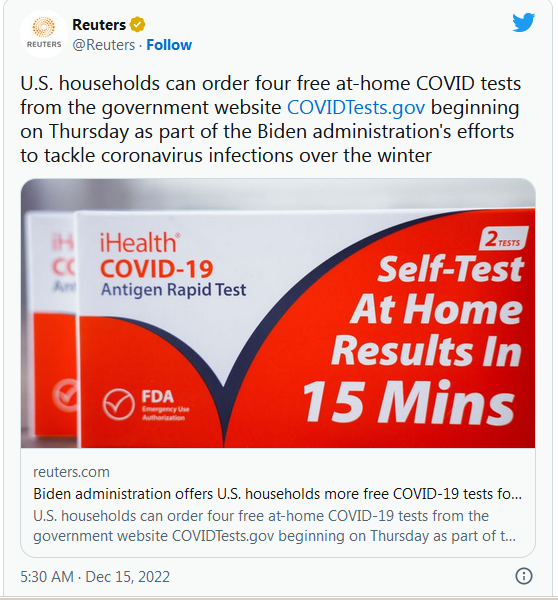 New study estimates that the COVID-19 vaccination program in the U.S. prevented more than 18.5 million additional hospitalisations and 3.2 million additional deaths. Will this be a triggering as the suggestion that antivaxxers may not be the best drivers?https://t.co/QKC1URUMeT

That study was done in Canada (but I suspect it scales for the US, because FREEDUMB): 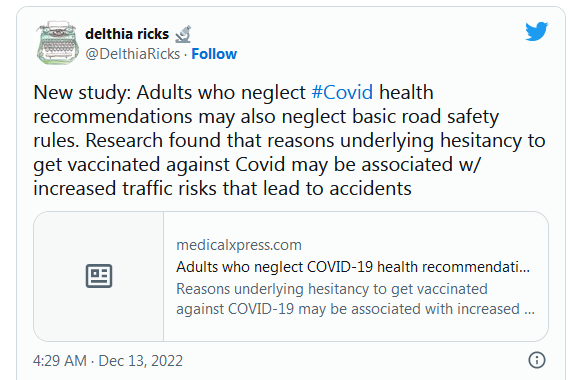 … The increased traffic risks among unvaccinated adults extended to diverse subgroups (older & younger; drivers & pedestrians; rich & poor) and was equal to a 48% increase after adjustment for age, sex, home location, socioeconomic status, and medical diagnoses. The increased traffic risks extended across the entire spectrum of crash severity and appeared similar for Pfizer, Moderna, or other vaccines. The increased risks collectively amounted to 704 extra traffic crashes.

“The study found traffic risks were 50%-70% greater for adults who had not been vaccinated compared to those who had,” noted Dr. Redelmeier.

“These data suggest COVID-19 vaccine hesitancy is associated with significant increased risks of a traffic crash, however, this does not mean COVID-19 vaccination directly prevents crashes. Instead, it shows how adults who do not follow public health advice may also neglect the rules of the road. Misunderstandings of everyday risk can cause people to put themselves and others in grave danger.” 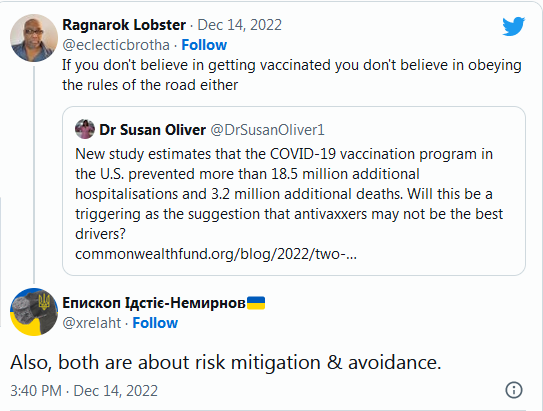 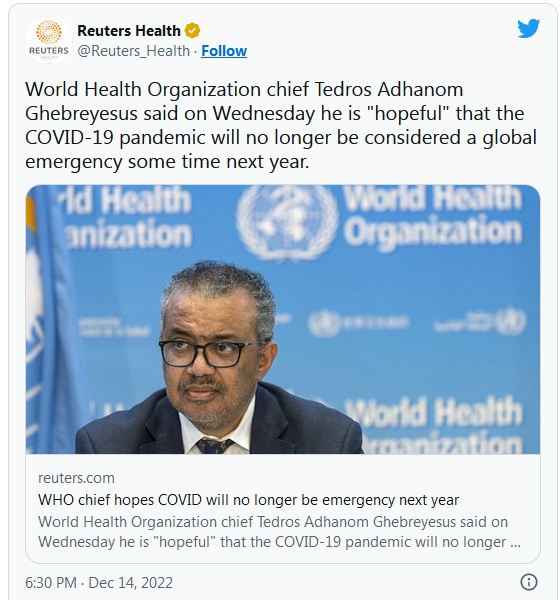 Pandemic's 2-year global death toll may be closer to 15 million, nearly 3x more than previously reported, according to a new WHO study. Researchers say the pandemic caused ~4.5M more deaths than would have been expected in 2020 & 10.4M more in 2021 https://t.co/YxLvattEur

The deaths from Covid in the first 2 years of the pandemic were nearly 3-fold reported—~15 million globally—by @WHO excess death calculationshttps://t.co/YwZHD4ufC1@Nature pic.twitter.com/sE7wVs0tWR 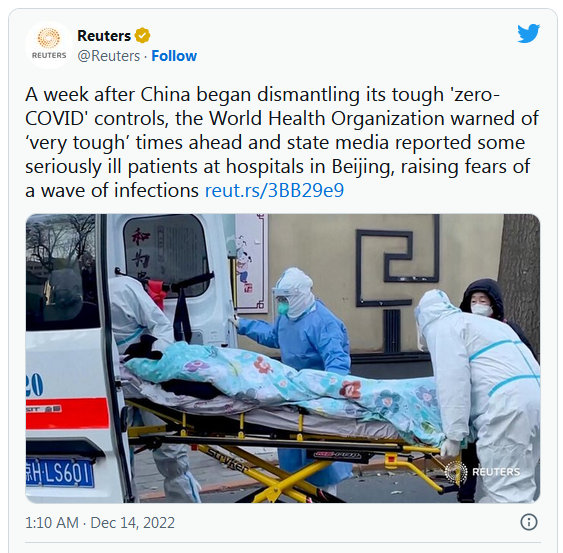 China put a priority on protecting rural communities from COVID as millions of city-dwellers planned holidays for the first time in years after Beijing abandoned its stringent system of lockdowns and travel curbs https://t.co/tRjDRaZh91 pic.twitter.com/uwtWTBQEx5 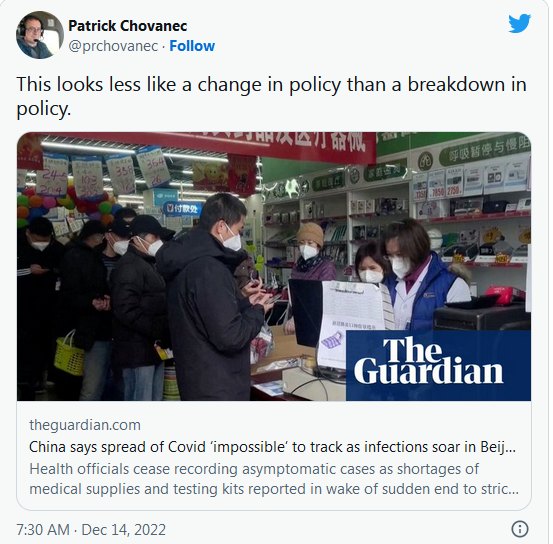 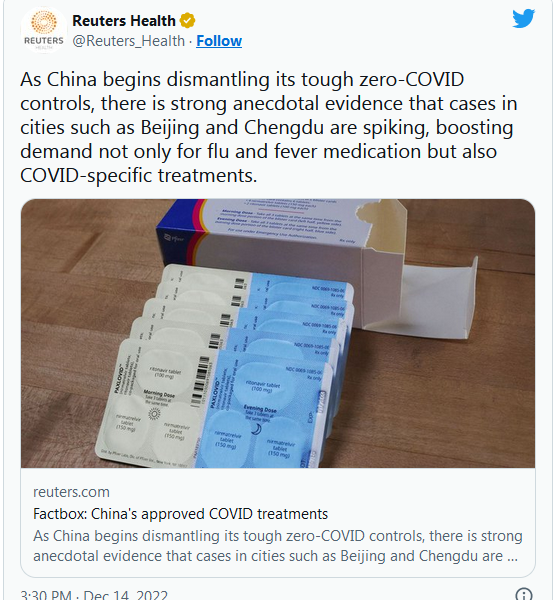 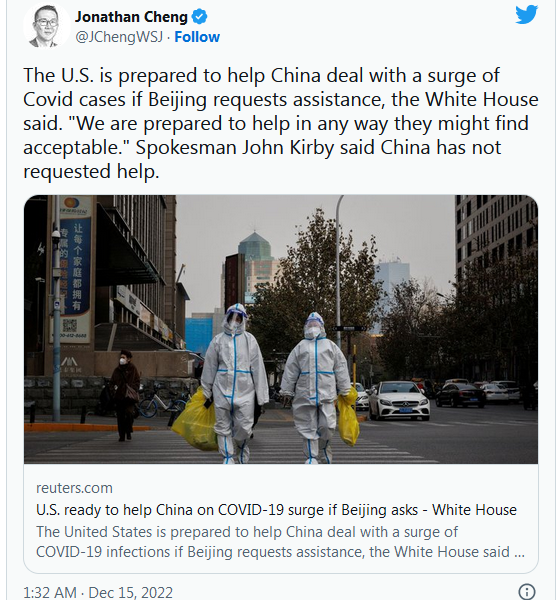 From a longer thread: 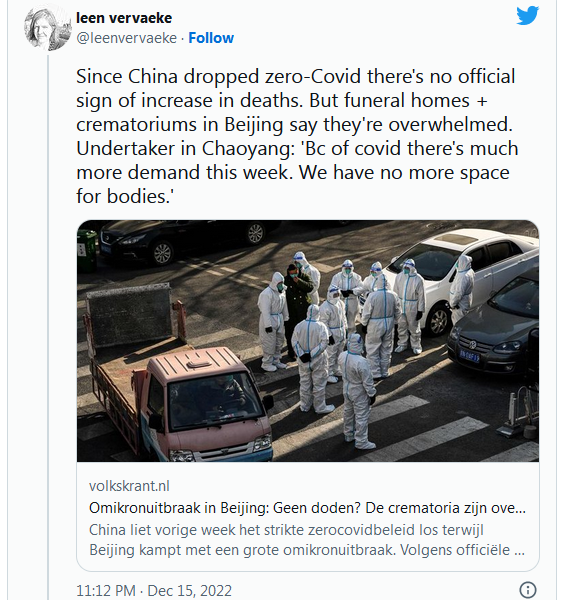 Consequence: there's now a waiting list to get bodies into crematorium. RFA wrote about 5-6 days waiting list at 3 crematoriums in BJ (https://t.co/lrZBFwl599), we found 2 more with waiting list of 3-5 days. Means relatives have nowhere to go with the body of their loved one. 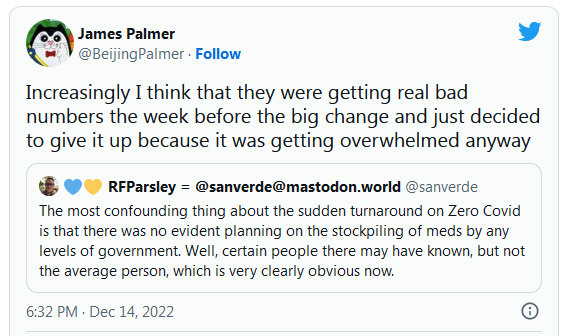 Ah, now reporting cases in the hospital- much more transparent and helpful.
I wonder if between this and making Paxlovid available they're going to come around to a sane response🤔 https://t.co/gc92NfD7Wl

Prof Chen (article below): ‘timing of China's re-opening "not ideal" but had to do it…Singapore/New Zealand made changes when infections at bay…#China moved with full-blown outbreaks… government "heard the voice of the protesters" but not ideal timing.’ https://t.co/qdTleHrz34 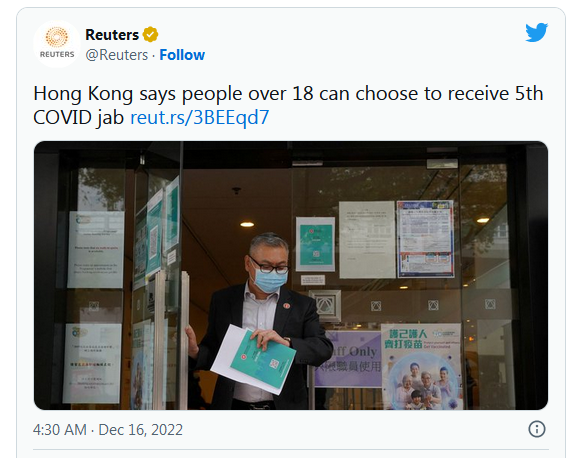 All is not quiet on the Asian-Pacific front
(besides China) pic.twitter.com/ON6Xhw2DvP 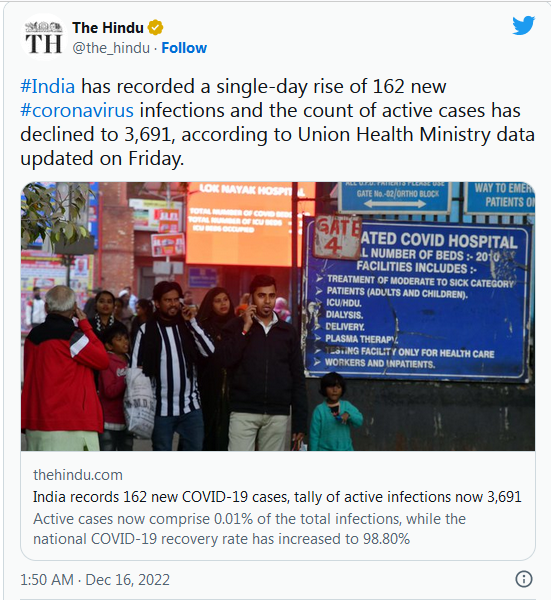 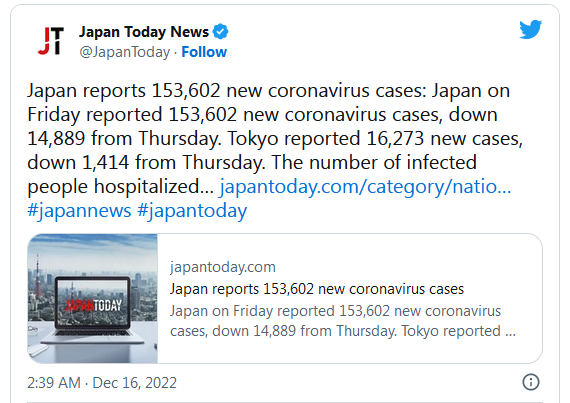 ======
Excellent, if scary, article — worth reading the whole thing: 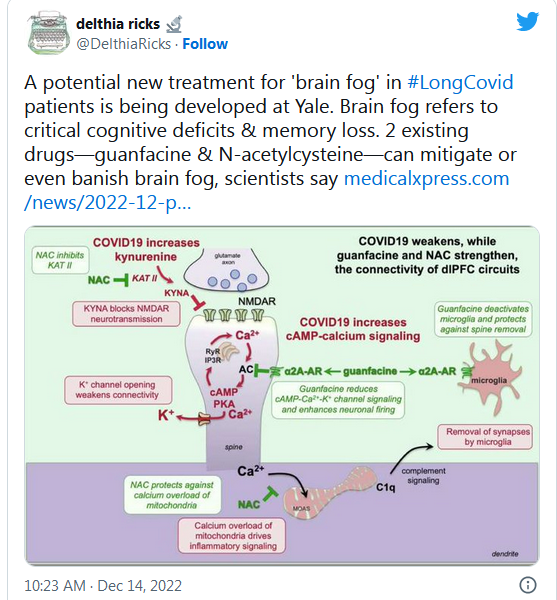 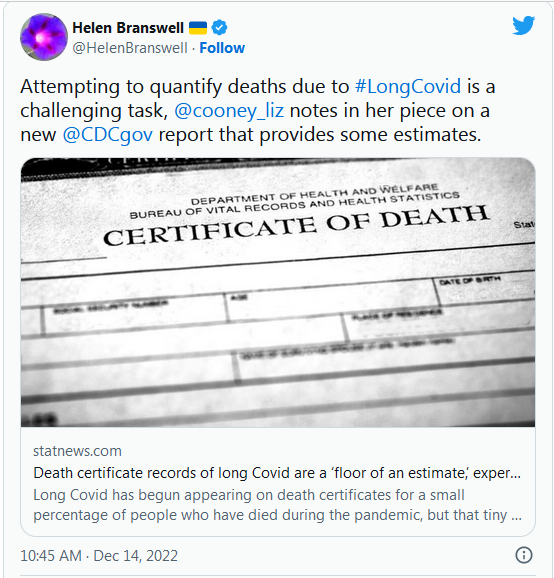 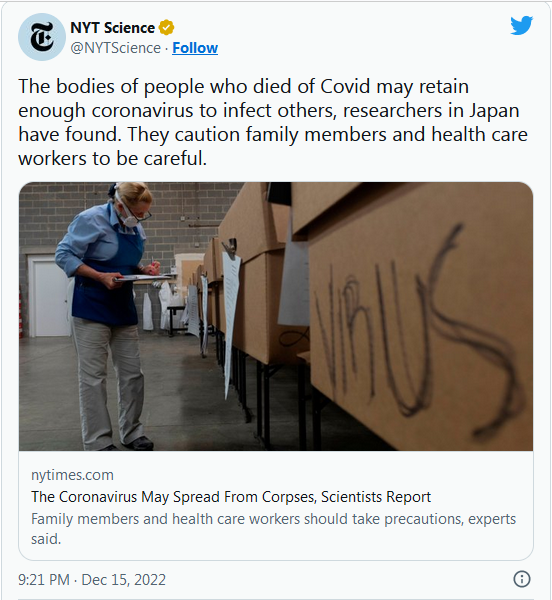 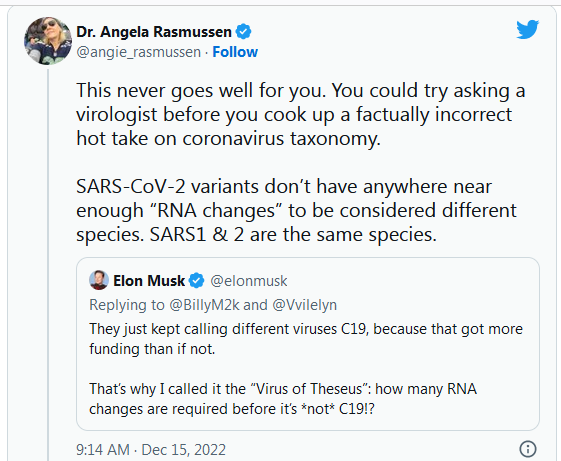 I know we got off on the wrong foot in 2020 and I have remained unimpressed with your antics since. But I’m sincerely happy to answer any of your virology questions so you can stick to humiliating yourself in matters of business, law, or pronouns.https://t.co/FHXsb9yEKf 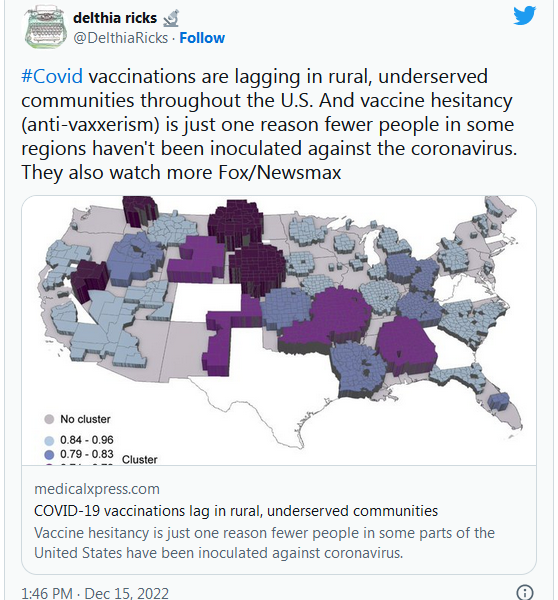 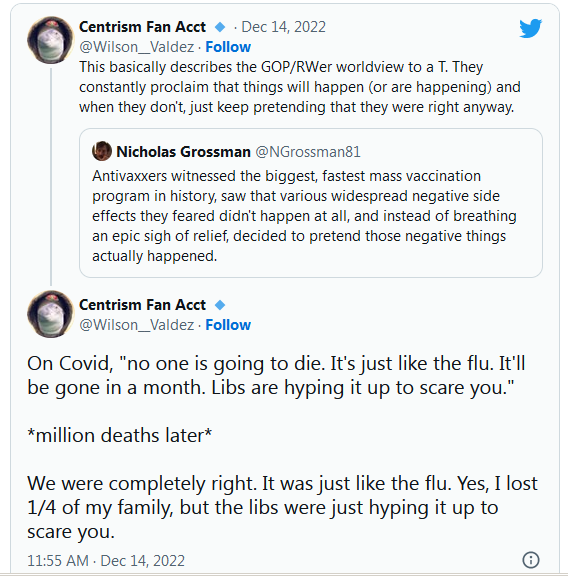 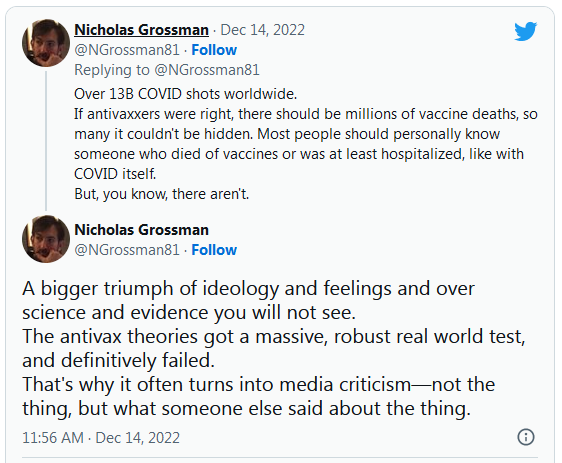 On The Road – cope – Grand Junction and Beyond, Part I
Next Post: Friday Morning Open Thread: Buckling Down to Finish the Year »