You are here: Home / Archives for Technically True but Collectively Nonsense

Not sure how I missed this yesterday in the Goldman Sachs news, but this kind of gives you an idea of the kind of arrogance of these pricks:

Fabrice Tourre, the Goldman executive who helped set up Abacus, emailed a friend in January 2007:

“More and more leverage in the system, The whole building is about to collapse anytime now…Only potential survivor, the fabulous Fab…standing in the middle of all these complex, highly leveraged, exotic trades he created without necessarily understanding all of the implications of those monstruosities!!!”

Seriously- who calls himself the “Fabulous Fab?” And these guys knew EXACTLY what they were doing, so spare me the “hoocoodanode” nonsense.

And while we are at it, let’s revisit McMegan’s bizarre attack on Matt Taibbi’s Goldman Sachs piece, in which she agreed with all of his facts, coined the phrase “technically true but collectively nonsense,” and then had this gem of a paragraph defending Goldman, in which she impressively combined a “hoocoodanode” with an “everyone is doing it!” (and, as commenter Downpuppy observed, was wrong both ways):

Even as an indictment of the system this thing is lacking, and showcases Taibbi’s lack of fundamental conceptual understanding. He complains about CDO’s on the grounds that Goldman hid the atrocious risks inside a fancy dan derivative package that no one could understand. But in fact, everyone was aware that CDO’s were repackaging crap mortgages–that was the point. The idea was pure portfolio theory, broadly agreed upon by everyone involved. Everyone knew a lot of the mortgages might go bad, either by defaulting or prepaying. (This is a risk for bankers, who don’t like the idea that if interest rates drop, their 7% mortgage might suddenly turn into a pile of non-interest-bearing cash which can only be invested at 5%.) But if you pool the risk, only some of the bonds will go bad, while others pay off. The result is a less risky, less volatile investment than any individual junk mortgage bond. And it would have worked, too, if it hadn’t been for those crazy kids a collapse in the housing market of a scale not seen since the Great Depression.

Someone looks stupid in the aftermath of the SEC charging Goldman Sachs.

It isn’t Matt Taibbi. And what exactly did Taibbi allege was going on:

Goldman used two methods to hide the mess they were selling. First, they bundled hundreds of different mortgages into instruments called Collateralized Debt Obligations. Then they sold investors on the idea that, because a bunch of those mortgages would turn out to be OK, there was no reason to worry so much about the lovely ones: The CDO, as a whole, was sound. Thus, junk-rated mortgages were turned into AAA-rated investments. Second, to hedge its own bets, Goldman got companies like AIG to provide insurance – known as credit-default swaps – on the CDOs. The swaps were essentially a racetrack bet between AIG and Goldman: Goldman is betting the ex-cons will default, AIG is betting they won’t.

END_OF_DOCUMENT_TOKEN_TO_BE_REPLACED

Apparently DougJ has had the McMegan watch duties, but I’m not sure how he missed this gem:

We’ve been dipping our toes into the DC housing market recently, but after this weekend, I think I’m just about ready to give up. Anything that comes on the market at a decent price is snapped up almost immediately–by my count, mean time from listing to contract is under seven days. The only things that stay on the market long enough to look at fall into one of two categories:

1. The owner bought the house between 2004 and 2007, and wants to get their money back out, hopefully with a little profit . . . and has therefore priced their home at least $100,000 above what the market will bear.

2. The house has been rented, and the tenants, familiar with their copious rights under DC housing law, are essentially refusing to allow the house to be shown.

There are two components to this, one DC-specific, one not. The specific part is the aforementioned tenant laws, which make New York’s arcane housing court system look like a bastion of pro-landlord sentiment.

By now, you just have to know what is coming next, don’t you? I mean, it is a virtual given. Wait for it, wait for it… THERE:

Not in DC! There’s a whole Office of the Tenant Advocate that will harass your landlord for free if he does you wrong. I resorted to it when a house we were going to rent, that was having some work done when we looked, turned out to have been renovated substantially below both code, and what we were promised.

It’s so unfair when tenant laws work in all tenants’ favor. John Galt would bust in with his unregulated firearms and demand that the free market says those mean tenants show the house against their will!

And I’ll spare you all from linking to the 30 or so posts I’m sure exist on why Megan thinks more people should be renting than owning a home (something with which I generally agree!). You’d think someone who believed that would like strong laws for tenants. But then you wouldn’t have what it takes to write for the Atlantic.

END_OF_DOCUMENT_TOKEN_TO_BE_REPLACED

I was really good and didn’t read McMegan for a while, but for some reason or another, I started up again. Today, Megan reacts to the following video:

Basically, teabaggers and health care advocates were on two sides of a street each doing their thing about health care reform, and a man with Parkinson’s sat down in front of the teabagging fools. They proceeded to berate him and throw money at him and basically act like scumbags. Megan’s response:

No matter how frail his condition, could the fellow on the ground possibly have been seriously endangered by having two bills hurled his way?

I’d certainly be willing to take such harsh treatment from the nice folks at Progress Ohio.

Great. Get back to us when you have Parkinson’s disease, asshole, and I can find a few people to throw shit at you.

Are we going to have to end up paying these glibertarians to go Galt?

END_OF_DOCUMENT_TOKEN_TO_BE_REPLACED

Every couple of weeks, in between visits to a Pampered Chef outlet or the Iphone store or a wine party held by Cato or Reason, McMegan will belch out a post so silly and riddled with inaccuracies that some poor bastard like Tom Levenson or Susan of Texas will have to spend hours noting all the mistakes and absurdities.

Then, a few days later, after everyone has already had a laugh and the piece has been thoroughly debunked, Sullivan will then link to it and call it “interesting” or “provocative,” and we here will then have to field 5000 comments furiously asking why DougJ and I continue to read Sullivan (because I like his writing!).

But the worm may have turned. In her latest offering, Megan asserts that the GOP in-house polling unit, Rasmussen, really isn’t that off, and Sullivan not only corrects the record but appears to have finally had enough: 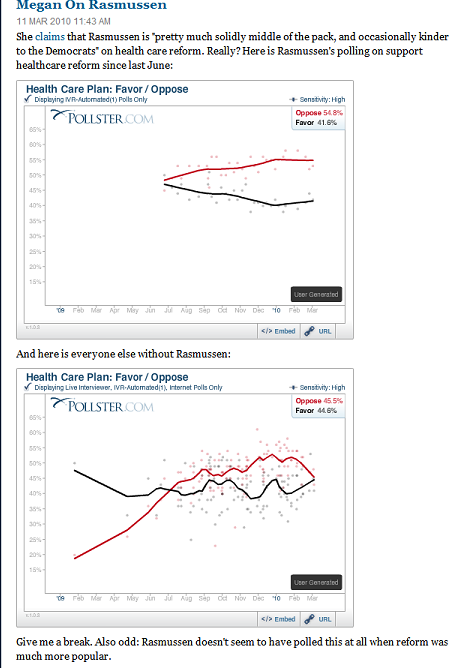 END_OF_DOCUMENT_TOKEN_TO_BE_REPLACED

Ezra Klein points out that we ration healthcare in this country, namely by simply pricing millions out of the market:

We ration. And if the numbers and the surveys don’t convince you of the point, this is what it looks like when we ration.

Like most left-leaning folks, Klein clearly doesn’t know the definition of rationing. Take this one from Britannica:

Klein evidently thinks that market outcomes that he dislikes mean that government should step in and impose outcomes that he does like. All right, let’s admit it; the health insurance market and the rest of health care are royally screwed up as a result of decades of government interventions and mandates. Consequently we don’t actually find the usual benefits of falling prices and improving products and services that we experience in normally operating markets where robust competition and choice reign.

It gets worse, but really, what is the point in reading anymore after that blurb?

So to be clear, if you get a box of chocolates for Christmas, and then tell your friend they can only have one because you are rationing them so they last longer, you are a BIG FAT LIAR because you are not the government.

If you work at a non-profit food bank, and you tell people only one five lb bag of flour because donations are down and you are rationing the flour, you are simply an idiot who does not understand what rationing is.

Likewise, when a health insurance company that you and your employer have paid premiums for two decades refuses to treat your ailment because it is an experimental treatment or they found something that might lend them to believe it was a pre-existing condition, they are not rationing, because they are not the government.

And for all the people who can’t afford health care and go without medicine because they can’t afford it, that really isn’t rationing, because it isn’t the government doing it. I’m sure that makes you feel tingly in your naughty places.

Are we due yet for another Reason piece about how libertarians want a serious discussion on health care?

END_OF_DOCUMENT_TOKEN_TO_BE_REPLACED

Via Taibbi, this was a fun eight minutes:

I enjoyed that immensely.