You are here: Home / Organizing & Resistance / Fables Of The Reconstruction / Maps to consider…

A few days ago, Josh Marshall over at TPM published a map of how various States treat collective bargaining for public employees’ unions: 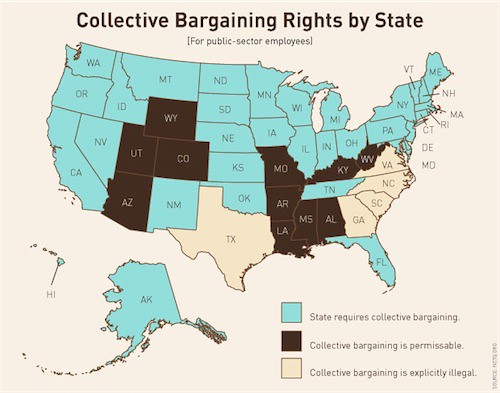 There are some obvious patterns when one considers this map (including the Red State/Blue State memes of recent years).

Deeper pattens emerge when you look at a map of Free States and Slave States as of 1857 when the Dred Scott Decision opened all US Territories (and all Free States) to Slavery: 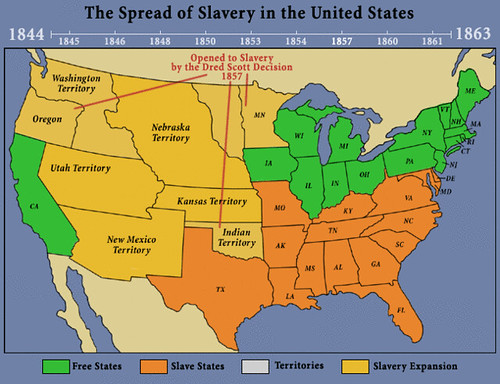 What thing becomes clear–as you consider the modern Republican Confederate Party’s effort to attack workers, Unions, the Middle Class and their rights–is that their focus is all about the theft of labor. Stealing the labor of folks is a sure fire way to get rich and it has been since, well, forever. Fighting efforts to protect people from the theft of their labor is what the modern so-called Conservative and/or Gliberterian movements are all about.

What made slavery so damn profitable was the theft of labor. It served two important purposes: 1) Free labor from your slaves, and 2) the labor you steal from your slaves helps to suppress the demand for higher wages from the labor of workers that you must pay.

Slavery offered an elite class multiple ways to cut cost and steal labor. This system of labor theft has experienced two great threats in the last 150 years. The first was the Civil War, which ended the above ground buying and selling of humans and the theft of their labor. This was a major victory in the long fight for justice, but it was not long before gains were pushed backed.

By the 1870s white supremacists had successfully used terrorism to retake political control of the former Confederacy. By the 1890s they had re-introduced slavery through a creative use of the prison system. Prisoners were leased, rented, contracted out and even sold to private individuals or corporations by State and local officials. Laws were changed and made it very easy to enslave any man, woman or child that could be caught in the new system. These laws went by many names, but collectively they were known as “Jim Crow Laws” and they were not restricted to just the South. By 1900, legalizing white supremacy through these laws had spread in some manner to every State in the Union (click links to find Jim Crow Laws in the South and Jim Crow Laws outside of the South).

The selling of convict labor and the open-ended “legal” systems created to fill the growing demand for stolen labor created an industry that lasted decades–despite regular moments of shock and outrage when this or that story of abuse bubbled up into the news of the day.

There were basically three ways that labor was stolen for private profit and corporate gain. Convicts could be supplied with materials and forced to do piece work for a private person/company by the State. Or the State could sign a contract with this or that person and/or corporation to have this or that convict work to complete this or that task–sometimes reporting back to the State prison and sometimes becoming the “property” of the contract holder (Smithonia Y’all). Worst of all were the arrangements to just lease (sell) convicts to private persons/corporations to do with that prisoner as they saw fit for the duration of their leases. This was no different than slavery and the most common way to get out of a lease was to die.

In 1900, a Congressionally required report  was issued by the Commission on Prison Labor. It showed the rise and spread of these new systems of slavery: 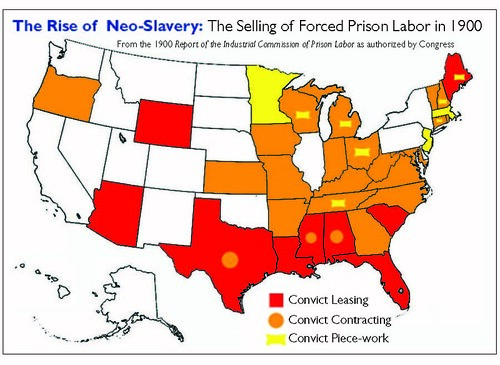 This system of boldly stealing the labor of convicts lasted into the 1930s (and versions of it still can be found in almost every State of the Union). It was FDR and the new Democrats of the New Deal who passed a series of laws that made the theft of labor more difficult and help workers to organize and collectively bargain for a fair and living wage. It work. A great middle class in America was created and for almost fifty years prosperity was shared.

The effort to push back against labor rights started almost immediately. By 1947 this movement was able to pass the Taft Hartley Act and open the door to new restrictions to the rights of workers. By the Reagan era in the 1980s, the movement to steal labor was repackaged and resold to the most gullible and cynical among us. Since then it has picked up a lot of steam. Laws to restrict the rights of workers have been given the very Orwellian name, “Right to Work” laws–as in in you have the right to work, but not the right to come together and ask for a fair deal. In a “Right to Work” State, a worker is on his or her own. The State will always fight against you. You are on your own sucker and you just have to deal with it. In a “Right to Unionize State” you have back-up, regardless of whether or not you work in a Union shop. 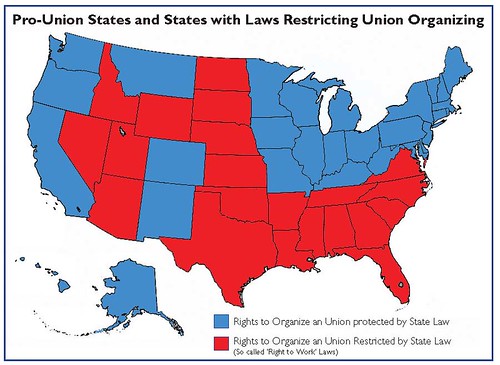 When all the States turn from Blue to Red, then the Middle Class in America will be gone. It will be over. The Government will be organized to promote and support the theft of Labor by the elites just as the government of the Confederate States of America was organized.