The Math Demands It

You are here: Home / Archives for The Math Demands It

This is a follow up to Anne Laurie’s post below, and continuing proof that the front pagers are not all different accounts from the same troll factory in Grovers Mill, New Jersey.

Disclaimer, or reclaimer, or full disclosure or something.  Bernie isn’t my first choice, or second, or third. I think he’s a disingenuous ego-driven politician who did a lot of damage in 2016, has a record of actual progressive accomplishment that is, to be charitable, thin, who does not walk the walk in crucial ways, and who, IMHO, would be the leading candidate most likely to lose to Donald Trump in 2020 of all the leading potential Democratic Party nominees.  Of the top five, my personal ranking right now is Warren, Harris as a close second, Buttigieg as a more distant third, another gap to get to Biden, and then a yet bigger gap to Sanders.

All that said, the arguments about his spending plans and their purported reliance on the monetary theory to which his lead economic advisor subscribes seem to me to have some bad numbers behind them, and to overstate the case against the heterodox ideas of Modern Monetary Theory. 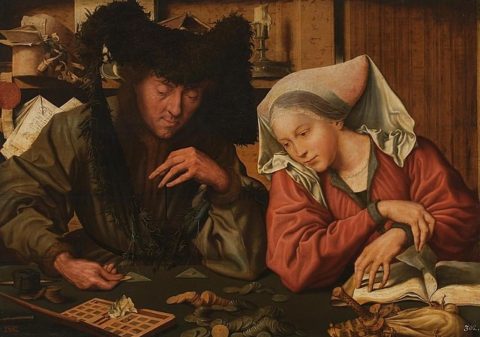 This all caught my eye in part because my current project (Money for Nothing, Random House, due out in June 2020) spends some time with John Law, the Scottish duelist, gambler, adventurer, architect of one of the first great financial and stock market bubbles, and early monetary theorist.  Law was a genuinely astonishing character: born to a Scottish banker, he inherited young, headed to London and lived a basically worthless, wastrel’s life — drinking, womanizing, gambling (ineptly, at this stage). (Here’s a contemporary memoir that has the fun details.)  In 1694, when he was in his early 20s and running out of his father’s money, he got into a duel — for reasons that are still somewhat obscure, but may well have been scandalous.  He killed his man, was charged with murder, and escaped to the Continent, where he began to develop into the man we now remember.

When Law was finally able to put his ideas into action in France between 1716 and 1720, some of them worked and have evolved into ordinary financial tools, and others, quite spectacularly, did not — and it’s that story that informs some of my thinking about MMT (for all that I know the past is a different country, and radically alien context in which Law worked limits the direct lessons one may draw from his day into ours).

All that digression is both a sop to my current obsession and a long-winded way of saying I’m not an economist; I’m not remotely an expert on MMT or any macro-economic theory; I’m just a guy with a habit of reading odd stuff. I did have the advantage this a.m. of having a tame heterodox economist in the house (my sister in law), and we did talk about this post, but everything that follows is my folly.  Discount accordingly.

All the windup leads to two simple objections to the Bernie disdain in some of the tweets Anne Laurie quoted, and some of the comments that flowed from it.

The first, simpler point is that thinking in this tweet is just wrong: 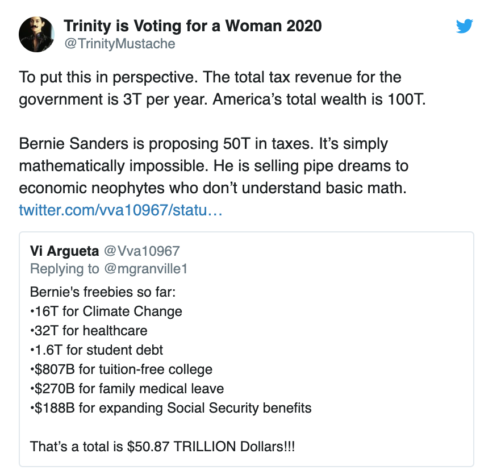 Here are the problems, in order from top to bottom.  The US and most countries don’t tax wealth, they tax income, which can be approximated as GDP.  So the US takes in close to $2.5 trillion in income and payroll taxes per year on about, estimated for 2019, about or a little above $21 trillion in GDP (see table 7).

END_OF_DOCUMENT_TOKEN_TO_BE_REPLACED

First poll in any early state that has Warren over Sanders.

Lots of manufactured media narratives about other candidates supposedly surging – but actually, Quinnipiac's new poll confirms that the candidate with by far the biggest surge since April is…@BernieSanders.

Why'd he cut off the March column?

In other words: When Biden announced, Sanders lost 8 points, which he has since regained. Of course, his numbers could continue to improve… but since March, Elizabeth Warren has gone from 4 points to 15. And she’s trending!

Drake and I have collectively sold 4 million albums in the last year. https://t.co/zHHWH7Gpr2

END_OF_DOCUMENT_TOKEN_TO_BE_REPLACED

Per The Register, “Hipster whines at tech mag for using his pic to imply hipsters look the same, discovers pic was of an entirely different hipster”:

… At the end of February, MIT Technology Review emitted a pithy rundown of a 34-page research paper from maths-modelling boffins at Brandeis University in the US; the paper essentially posited that in a bid to make that all-important “countercultural statement”, hipsters can end up looking alike…

Accompanying the article was an edited stock image of a generic millennial chap in plaid shirt and standard-issue beanie, or “trendy winter attire”, as Getty put it.

The MIT journal’s editor-in-chief, Gideon Lichfield, took to Twitter to tell a “cautionary tale” about what followed the article going live:

“We promptly got a furious email from a man who said he was the guy in the photo that ran with the story. He accused us of slandering him, presumably by implying he was a hipster, and of using the pic without his permission. (He wasn’t too complimentary about the story, either.)”

… The stock photo giant checked the model release and lo! The guy in the image wasn’t even the same dude who was complaining. “He’d misidentified himself,” Lichfield said.

“All of which just proves the story we ran: hipsters look so much alike that they can’t even tell themselves apart from each other.”…

As my old man used to say, “There are times when ‘deny all knowledge of the incident’ is the wisest choice.”

Here's the original article (and the picture that stirred all of this up). https://t.co/ZYOh08bCFf

END_OF_DOCUMENT_TOKEN_TO_BE_REPLACED

This is absolutely adorable!

END_OF_DOCUMENT_TOKEN_TO_BE_REPLACED

And people are less stressed about being able to pay for a medical bill:

Fewer Americans having trouble paying for care. The ACA not the only factor, but a big one.https://t.co/VPqKkPGmdT pic.twitter.com/AQTi2VgU81

Why I was told that was Unpossible

END_OF_DOCUMENT_TOKEN_TO_BE_REPLACED

I sleep with a pillow over my head every night. Please do not indict @petersuderman if I should happen to die in my sleep.

(In reference to one strand of conspiracy theory about Scalia’s death, of course.)

reality has no self-awareness pic.twitter.com/YHPczFUSxL

It’s nice they’ll have something to keep their hands busy, she said sweetly.

END_OF_DOCUMENT_TOKEN_TO_BE_REPLACED

I normally hate big data wankery, but I find this shit fascinating: the share of google searches for a GOP candidate in NH on election day closely mirrored that candidate’s share of the vote.