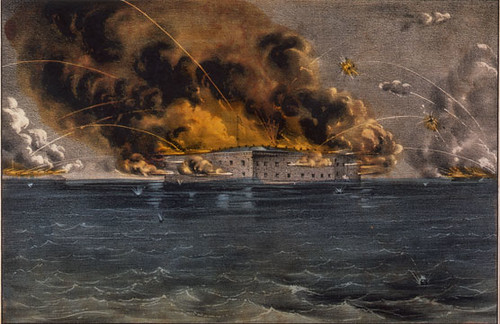 We are hours away from the 150th Anniversary of a group of traitors launching a war on America. It was 4:30 AM on April 12, 1861 when Fort Sumter was attacked to protect slavery and other notions of white supremacy. Boiled down, the Civil War was about a small group of elites who used arguments about racism–wrapped in a patina of false patriotism and illusions of honor–to get a lot of poor folks to die in a war fought to protect the “rights” of a small group of elites to steal the labor of others.

Before the shooting started, there were many who sought a compromise to avoid the coming bloodshed. From 1820 to 1861, the Confederates made demand after demand and every time the demands were met–the goal post was moved and new demands were issued. Finally their demands left zero room for compromise as their minority demanded absolute capitulation from the majority to their crazy ass ideas and fantasies. They were called out on their bullshit and they responded with treason and violence.

In many ways, the current skirmish over funding the Government for the next six months and the larger coming battle over Paul Ryan’s Path to a Galtian Utopia has very strong echoes of the build up to the Civil War. The names of the Parties have flipped, but the battle lines are similar. One side is unwilling to compromise and welcomes chaos with giddy excitement. The other is willing to embrace painful compromise to preserve the Union–agreeing to meet the Confederates far more than halfway time and time again. And yet–then as now–any compromise with the Confederates is never enough. Each new agreement just opens the door to more crazy and a fresh new unreasonable demand.

In an ironic twist, Lincoln’s old Party has been taken over by Confederate Dead-enders and Progressive forces have taken root over in the Democratic Party (history is filled with subtle humor and in-jokes).

Just as their antecedents did a century and a half ago, the modern Republican Confederate Party continues to insist on no compromises in pursuit of their reality-free and ever-changing demands and that the majority of America capitulate to their Galtian fantasies. And once again those dedicated to preserving Union, keep trying to work with these extremists to prevent harm to our Nation. But at some point bullies and assholes must be confronted–especially when they go too far. 150 years ago a breaking point was reached. It could happen again.

Perhaps a shutdown will be avoided this evening. If it is, it will be because another CR to fund the Government for two to three days more was passed. That will give the Confederate Party anther 72 hours or so to make fresh new demands and move the goal post once again. And if by some happy chance they keep their word this time, we can be sure that they will play the same game around extending the Federal debt limit in a few weeks and again in the fall when they have a new opportunity to take the Government hostage.

Like the Confederates of 1861, the modern Confederate movement is dedicated to protecting a handful of elites and their ability to steal labor while cost shifting expenses to the poor and middle class. Regardless of how they choose to brand themselves (from GOP to Tea Party to Libertarian to Conservative) this movement shares a vision that is more CSA than USA. And like the Confederates of old they use appeals to racism–wrapped in a patina of false patriotism and illusions of honor–to get a lot of poor white folks to support policies that will ultimately hurt them.

If talks break down and there is a government shutdown all National Parks will close. Among them will be the National Park at Fort Sumter. Over the next few days events were planned to commemorate the start of the Civil War. These events will be cancelled in the wake of a Government shutdown. If this occurs it is a way for the modern Confederates to take a fresh shot at the old Fort. So perhaps the Republican Confederate Party effort to shut down the Government is just a misguided way to celebrate Confederate History Month. That’s about the best I could say for them.

Previous Post: « There’s A Law About That
Next Post: Because There Is No Shortage of Folly…Why Not Waste Bytes on McArdle Too? »