I was not kidding:

And I only know what a shillelagh is because of years as a misspent youth reading sci-fi and playing AD&D.

END_OF_DOCUMENT_TOKEN_TO_BE_REPLACED

No, not the Mountaineers, but my fraternity boys. The dorms are still closed and the caf is shut so I have three boys crashing here tonight, so they came for the Bama/Auburn and WVU games (followed by the Penguins), so I just picked up two of those pre-cooked roaster chickens from the grocery, some mashed potato packets (I’m lazy tonight), and some broccoli.

Told them they had to cook, and I even got the right pots out for them to steam the broccoli. Here is what happened.

One of them filled the steamer pot almost all the way to the top, instead of just an inch of water, so that when you dropped the steamer basket in, you were essentially boiling the broccoli. I was in the living room, and I kept yelling “It isn’t steaming yet?” without realizing what was going on. But wait, it gets better.

He decided he wanted broccoli and cheese, so, in his infinite wisdom, he dropped a half lb of shredded mozz INTO the boiling steaming concoction. Once he was convinced all the ingredients were completely dead, he then drained the mixture into a pot and went to work on the mashed potatoes.

This is a bag of mashed potatoes. You pour two cups of water into a pot, bring it to a boil, and add the buds. He did that, but then decided he wanted cheesy potatoes, and, of course, dumped the other half lb of shredded mozz into it. I told him once the water was boiling to add the buds and whisk it with a metal whisk, and so he did.

I now have a steamer that is completely clogged with mozz, a pot with a substance that rivals crazy glue and gum, and a whisk that is completely clogged with a cement like combination of cheese and mashed potatoes and more closely resembles a shillelagh. How did a country this obese manage to do so without any cooking skills. How do you get fat eating shit like that? I don’t even want a bite of it.

The frat boys have a wish list of things they want from the alums, and on the list (along with couches, pool table, etc.) are kitchen appliances. I’m taking them off the list before they hurt themselves.

END_OF_DOCUMENT_TOKEN_TO_BE_REPLACED

Auburn-Alabama is awfully interesting — Tigers just tied it up. The Dawgs just pulled within three after playing dead for a half. Go ‘Bama! Go Dawgs! Go ‘Cocks! Go Mizzou!

As for non-SEC teams, I guess I’m hoping UCLA and Stanford win, but I’m not very invested. I hope both TN and USC lose because both were stupid enough to hire Lane Kiffin.

PS: Looks like Coles’s team is winning. I’ll root for them for his sake. Go ‘Eers!

END_OF_DOCUMENT_TOKEN_TO_BE_REPLACED

Someone in the last thread wanted more Snowden, so here’s the latest:

The documents are being reported exclusively by CBC News.

The briefing notes, stamped “Top Secret,” show the U.S. turned its Ottawa embassy into a security command post during a six-day spying operation by the National Security Agency while U.S. President Barack Obama and 25 other foreign heads of government were on Canadian soil in June of 2010.

The covert U.S. operation was no secret to Canadian authorities.

The reason this is a big deal is that the Canadian version of the NSA, the CSEC, is prohibited by law from spying on Canadians without a warrant, and also prohibited from tasking the NSA to do it. So it looks like some laws may have been broken Here’s the Globe and Mail’s piece on the CSEC.

The leaks came from Greenwald. I’ll save the haters some typing by linking to this:

Before turning his attention to writing books targeting the U.S. George Bush administration and Republican politicians, Greenwald owned sites such as Hairy Jocks and Hairy Studs. Greenwald is now the sole journalist with full access to Snowden’s document trove.

That’s from Canada’s answer to the NY Post, the Toronto Sun. The Sun is making hay over the fact that the CBC paid Greenwald $1,500 as a freelancer for access to Snowden’s story.

END_OF_DOCUMENT_TOKEN_TO_BE_REPLACED

Buses weren’t running on Wednesday, so the coach at Edison Tech, a city high school, arranged for a school bus to pick up his boys at a central meeting spot on Main Street in Rochester to take them to a scrimmage with another school. While the boys were standing around waiting, this is what the cops said they did:

The police report says the students were obstructing “pedestrian traffic while standing on a public sidewalk…preventing free passage of citizens walking by and attempting to enter and exit a store…Your complainant gave several lawful clear and concise orders for the group to disperse and leave the area without compliance.”

The interview with the coach is worth watching because he’s clearly pained by the whole thing.

END_OF_DOCUMENT_TOKEN_TO_BE_REPLACED

Some great football on tap today: Ohio State vs. Michigan. Duke vs. North Carolina. Georgia vs. Georgia Tech. Notre Dame vs. Stanford. Clemson vs. South Carolina. Texas A&M vs. Missouri. And of course, Alabama vs. Auburn.

Then there are my truly awful 4-7 Florida Gators — the first UF team to fail to make it to a bowl since 1990, a squad just coming off its first loss to an FCS opponent last week — vs. our archrival, unbeaten #2 Florida State. The Gators are a 27-point underdog. Which seems kind of generous.

Will the Gators take all the disappointment, disrespect and negativity as inspiration and pull off the most stunning upset of the year? Almost certainly not, but that possibility will keep me watching.

I think Ohio State will handle Michigan and Duke will prevail against NC. Georgia will triumph over Georgia Tech, and Mizzou will beat Texas A&M. The ‘Cocks will crow after downing Clemson, and Alabama will win in a squeaker over Auburn.

What are y’all watching today? Any predictions? Oh, and feel free to slag on my Gators all you want, of course; just remember that what goes around comes around.

END_OF_DOCUMENT_TOKEN_TO_BE_REPLACED 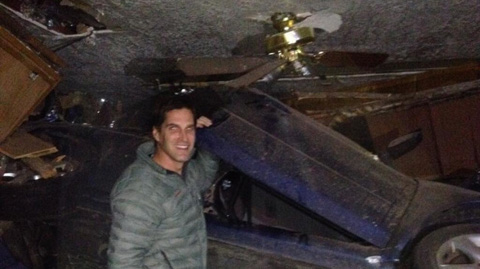 Okay, you’re driving down the highway and see a car that has crashed into someone’s house. What do you do? Stop and help? Make sure everyone’s okay? Then go on your merry way?

If you’re one of the privileged princelings pooped out by Mrs. Mitt, you apparently also ask someone at the scene to take a picture of your grinning, devil-eyed mug next to the crash vehicle then tweet a self-aggrandizing account of your own heroism:

Was first on scene to big accident, see pic of car in the house. I lifted 4 people out to safety. All ok. Thankful.

According to the cops, none of the car’s four occupants were injured, and the homeowner was also okay:

Hoyal said the four passengers did not need to be taken to the hospital and were “checked at the scene and released.”

Does it sound a bit like the cops were puncturing Romney’s initial account, taking pains to emphasize that Romney didn’t “lift four people out to safety” in a single bound, all by himself? Maybe Utah is as sick of the Romneys as the rest of us. But given his parentage, perhaps it’s not surprising that young Romney has an inflated sense of his own centrality to events.

The Romneys seem to inhabit a reverse Walter Mitty universe, living fantastically privileged lives where all the skids are greased, all the jobs are hobbies and failure is literally not an option but yet somehow imagining themselves as courageous achievers. On what other planet would you expect to be lionized for lavishing billions of federal dollars to “rescue” the SLC Olympic Games or have your $70K tax write-off dancing horse considered a therapy appliance?