Have a couple guests for the evening, and I have everyone’s keys locked in the safe, where they will only be available at 9 am after blueberry waffles and strong coffee.

I’m making a standing rib for tonight, with steamed green beans, homemade mashed potatoes with heavy cream and salter butter (sorry, Dr. Marks), and a fresh garden salad, all topped off with cheesecake and coffee. Simple, but decadent, I think, and with enough veggies I don’t feel totally guilty. Although I am writing this before I unleash myself on the cheesecake. The pork and sauerkraut already in the crockpot in the fridge for tomorrow.

I guess I will check in later, although I wonder how many of you will still be able to read.

Oh, and my animals are just sluts. As soon as a guest walks in and sits down, Lily, Rosie, and Steve all get thought bubbles that say “Hrmm, strange“ and then spend the whole night on other people’s laps. Sluts. And catwhore.

Oh, and I was cleaning today, and moved the baker’s rack to clean behind it, and something glass fell and shattered into a million pieces, and I have NO DAMNED IDEA what it was. It broke into so many pieces I couldn’t figure it out. And no, it was not the mustard, but I am positive that in a couple months I will put up a post bitching about how I can’t find xxxx, and we all know damned well that xxxx is what I broke,

END_OF_DOCUMENT_TOKEN_TO_BE_REPLACED

Speaking of which, Eric Wemple at the Washington Post, in his words, “reported that “Playbook” author Mike Allen of Politico showed a discernible pattern of writing favorable blurbs about advertisers.” In response to which, Mike Allen’s editor-in-chief complained to Howie Kurtz:

… Given the success of it, it did grow to become something that was highly coveted by advertisers. So it’s sponsored, but in tone, in substance, in the type of items: Who’s in, who’s out? That’s never changed a lick, not once, in seven years. So the idea — and it really wasn’t an argument what I read; it was more of a suggestion, insinuation, innuendo in a really unfair way — that the product is somehow compromised by advertisers was a) not supported and b) horribly, horribly unfair to what really is one of the most transparent journalistic products in the city. Anyone can read it any given day and sort of take their best guess as to why this is in there, why it’s not, who Mike had lunch with, who was giving him this, who he had dinner with, who was feeding him that. Totally transparent. I feel very, very strongly, if I could just say this about Mike Allen. I’ve known him for 23 of the 27 years he’s been in the news business. Some people like “Playbook,” some people don’t like “Playbook.” But no one has ever in those 27 years — not once, not ever — questioned his journalistic ethics. So I think as somebody did in this instance, was quite irresponsible in my view…

Translation from the (wounded) Weaselspeak: Sure, the ‘right’ people have long known that Mike will be their friend in exchange for money. But to call him a whore in public — that’s just hurtful!”

Off to have a nice dinner at one of our favorite local restaurants, with plans to be home before the drunks get loose on the roads. What’s on the agenda, celebratory or otherwise?

END_OF_DOCUMENT_TOKEN_TO_BE_REPLACED

So, Charles Krauthammer weighs in on the latest news out of Benghazi — which is to say the non-news that there was no conspiracy to cover-up whatever evil Hilary Clinton and Barack Obama are supposed to have done in this latest round of conspiracy mongers.

You may recall that a few days ago, The New York Times showed what real newspapers can do when they put some muscle into a story, and dug into the events that led up to the four American diplomats’/intelligence officers’ last hours in Benghazi.  They concluded that it was a confusing situation, that (as reported at the time) an incendiary video helped gin up a crowd, and that (as President Obama noted, to Romney’s eternal embarrassment, the next day) local Islamic militants were also involved.  The key finding: no meaningful al Qaeda link, as the Benghazi dead enders have been trumpeting for a while now.

So, if you are such a dead ender — that is to say, if you are a member of the modern GOP and/or part of its supportive claque in the DC media — what do you do?

Sane people might say, OK, nothing to see here, let’s move along.  I mean, even the Birthers (in office — not the Orly Taitz variety) finally gave up.  Also: Benghazi does have a real political downside.  The more it becomes obvious that there is, in fact, nothing to see here, that bad things happen in the world and not even a Kenyan Mooslim arsenal of superpowers can prevent them all, then the blowback for using American dead for such obvious political purposes starts to bite.

Hell, it already did.  See, again, Mr. Romney, burned not once but twice on the campaign trail for overeager Benghazi baiting.

But, of course, the set of sanity does not overlap with the set of those professionally committed to the destruction of all things the Democratic Party might support, a gang which includes much if not all of the GOP congressional delegation. 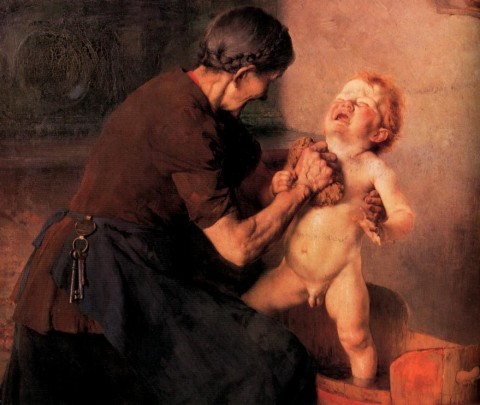 For example, consider this, from Congressman Lynn Westmoreland, a shining light of Georgia’s delegation to the Capitol:

“Of course Secretary Clinton was in charge at the time, and you know there are just now a lot of rumors going and pushing about her running for president in 2016,” he said on Fox News, as recorded by the Hill. “So I think they are already laying the groundwork.”

OK — so utterances of rabid partisanship have become SOP in the House GOP, so I suppose I shouldn’t be too shocked,  But what about that class of folks who consider themselves above the grubby world of politics — AKA the grandees of Washington’s media village.  Enter Charles Krauthammer.  There are none who combine the unmerited mantle of authoritative judgment and sheer malice more completely than our man Krauthammer — inexplicably treated as a serious analyst of modern politics and wholly engaged in the construction of the One True Narrative, reality be damned.

“By being defensive about this, he’s making it quite obvious the reason that the Times invested all the effort and time in this and put it on the front page is precisely a way to protect the Democrats, to deflect the issue, to protect Hillary, who was exposed on this issue as almost no issue in her tenure in the administration. It is obviously a political move.”

I actually think that’s what Krauthammer believes, along with Westmoreland and the rest of the GOP officeholders chasing down the Benghazi “truther” rabbit hole.  Why shouldn’t they? It’s what they would do.

Hell, it’s what they are doing:  to belabor the obvious, crying “Politics” avoids the necessity of parsing what the Times actually reported.  It saves having to defend the various claims of whatever it is that Clinton or Obama is said to have done wrong. Most of all, it ducks the obligation to take on what did happen in Benghazi with enough thought to inform deliberations that lead to, for example, not blowing up stuff in Syria.  Much easier to accuse the other side of doing exactly the vicious shit you would have.

END_OF_DOCUMENT_TOKEN_TO_BE_REPLACED

So that the Pope can deal with the delicate feelings of rich Catholics:

At least one wealthy donor in New York City is skittish about Pope Francis’ comments about capitalism.

Ken Langone, the billionaire Roman Catholic who helped found Home Depot, told CNBC he has heard grumbling about the Pope’s comments about the wealthy. Langone is helping to run the New York Archdiocese’s $180 million fundraising effort to restore St. Patrick’s Cathedral in Manhattan.

Langone has not been shy about sharing those opinions with New York Archbishop Cardinal Timothy Dolan, telling him, “you get more with honey than with vinegar.”

Dolan told the financial network in an interview on Monday he has heard from Langone that one wealthy donor got the “sense that the Pope is less than enthusiastic about us.”

One of the weirdest things to me about our current pathology of worshiping the rich is that they demand it from us proles. I mean, they are the true winners in society, and they just don’t understand why we don’t love them as much as they love themselves. Everyone knows that the importance of Christian charity is giving away .5% of your wealth and then salving the wound with the grateful tears from the populace.

END_OF_DOCUMENT_TOKEN_TO_BE_REPLACED

Apparently someone was filming me in my living room during the Chargers/Chiefs game on Sunday:

I may have gotten engaged in a little premature celebration.

END_OF_DOCUMENT_TOKEN_TO_BE_REPLACED

The Red State Editor that Mistermix was talking about has quite the history of being an asshole.

END_OF_DOCUMENT_TOKEN_TO_BE_REPLACED

Currently (wo)manning the smoker, watching Arizona kick the crap outta BC and waiting for the mister to get home to watch the games with me. As a job creator (I created MINE, anyway), I generously gave myself the day off, with copious reminders to myself to relax and have fun on the last day of 2013.

Here are my bowl game picks from the other day, updated to indicate where I got it wrong: 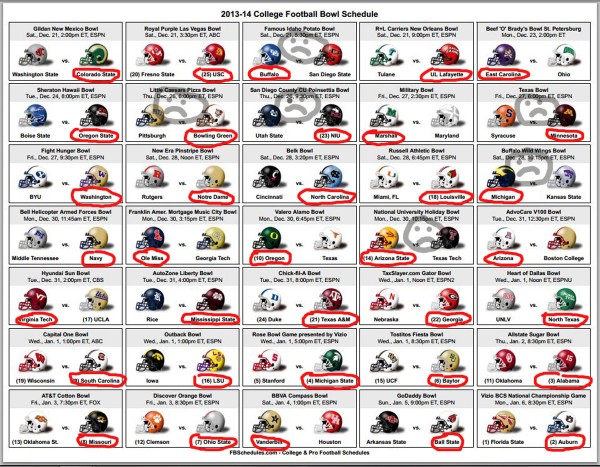 There are professional prognosticators who are doing much worse! Looking forward to Dawgs vs. Huskers tomorrow (Go Dawgs!) and Cocks vs. Badgers (Go Cocks!). We will also be watching Iowa vs. LSU with interest (Geaux Tigers!) tomorrow.

Which games will you be watching? Who are you rooting for and why?

Feel free to discuss topics other than football if you’d like — such as New Year’s traditions, cocktail recipes, food preparations, etc. My hubby’s family has a tradition that you should hold money (silver coins) in your hand at midnight for a prosperous New Year.

I’d never heard of that until I fell in with them. Maybe it’s an Eastern European thing? Anyway, I’m thinking it’ll kick in any time now…