Before we all heard about the hippie Pope we were watching North Carolina’s own Reverend Barber. Barber is the leader of an incredibly diverse group of people who support voting rights, health care, public education, civil rights for gay people, rights for women, labor rights, and poor people. 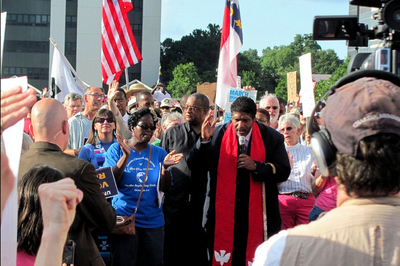 Rev. Dr. William Barber of the NC NAACP speaking at a June 2013 Moral Monday rally at the state legislature. He and other movement leaders are circulating an open letter asking Gov. Pat McCrory to convene a “Special Redemption Session” to reverse decisions controversial decisions about Medicaid and emergency aid for the long-term unemployed. (Photo by T.W. Buckner via Flickr.)

This is what Barber and his Moral Monday group have been up to since we last checked in:

Hundreds of protesters marched on the State Capitol Monday evening in a sign that the demonstrations that marked the 2013 legislative session will continue into next year.
The march came hours after a Superior Court judge ruled that state officials improperly denied a permit for the protest.
The NAACP organized the rally to protest policies of the Republican-led General Assembly. Several left-leaning groups are trying to pressure Gov. Pat McCrory to convene a special legislative session on expanding Medicaid and reversing cuts to unemployment benefits.
The NAACP and other groups plan to hold a mass march on the Capitol on Feb. 8.
“We want to send a shock wave through this state,” Barber told the crowd of people, many of whom held up electric candles in the rainy weather. “If you thought we fought in 2013, you ought to see how we fight in an election year.”
The fight was in a Wake County courtroom earlier Monday, as the groups challenged the Department of Administration’s refusal to give them a permit for the rally on Capitol grounds.
“The state cannot stand up and say, in good faith, that hundreds of people cannot gather,” Holmes said. “If the people of North Carolina cannot go to the State Capitol after work to pray, when can they go?”
Judge Allen Baddour questioned why the permit application asked what a group plans to do on the Capitol grounds, saying it appears that officials are basing the decision to grant a permit on the content of the activity.
“The concern the court has is that it is either discretionary or content-based,” Baddour said.

Conservatives made their usual well-reasoned argument in opposition to allowing dissenting political speech, where they wondered aloud whether Barber’s group would “roast a goat” or hold “womanless weddings” at the Capitol.

The judge said that he suspected that the administration’s ban on the NAACP was “either discretionary or content based.”

In other good news for democracy enthusiasts, the Obama Administration continues their strong record on voting rights with this pick:

Pamela Karlan, a noted voting-rights expert and professor at Stanford Law School, will join the Obama Administration shortly as Deputy Assistant Attorney General in charge of the voting-rights section. Karlan, a favorite of many liberals in the legal world, will join the department as it begins a strong counter-offensive on voting rights following the Supreme Court’s limiting of the Voting Rights Act in a decision earlier this year.

This position does not require Senate confirmation.