With quick and coordinated action by some of its top doctors, Nigeria, Africa’s most populous country, appears to have contained its first Ebola outbreak, the United States Centers for Disease Control and Prevention said Tuesday.

As the epidemic rages out of control in three nations a few hundred miles away, Nigeria is the only country to have an outbreak with hundreds of potential victims in a city with vast, teeming slums and yet to beat it back.

“For those who say it’s hopeless, this is an antidote — you can control Ebola,” said Dr. Thomas R. Frieden, director of the C.D.C…

While the danger in Nigeria is not over, the health minister, Dr. Onyebuchi Chukwu, said in a telephone interview that his country was now better prepared, with six laboratories able to make diagnoses and response teams and isolation wards ready in every major state.

After the first patient — a dying Liberian-American — flew into Lagos on July 20, Ebola spread to 20 other people there and in a smaller city, Port Harcourt.

They have all now died or recovered, and the cure rate — 60 percent — was unusually high for an African outbreak.

Meanwhile, local health workers paid 18,500 face-to-face visits to repeatedly take the temperatures of nearly 900 people who had contact with them. The last confirmed case was detected on Aug. 31, and virtually all contacts have passed the 21-day incubation period without falling ill…

On July 17, Mr. Sawyer defied medical advice and left a hospital in Monrovia, Liberia, where he was being held for observation after caring for his sister, who died of Ebola, although it was unclear whether he knew what she had.

Nigerian news reports said he used Liberian government contacts for permission to leave, flying to Lagos by way of Ghana and Togo. He planned to go to an economic development conference there and then fly back to Coon Rapids, Minn., for his children’s birthdays, according to media interviews with his widow.

Taken to a small private hospital after he collapsed, he denied any contact with Ebola victims and was initially treated for malaria. He died on July 25…

… Dr. Shuaib emphasized that even terrified Nigerians did not deny the virus’s existence or attack health workers, as happened in the other countries. “No conspiracy theories entered the debate,” he said…

Seems like the Ebola victim now under treatment in Dallas wasn’t nearly as sick when he left Africa, and our “World’s Best Healthcare” system should be at least as capable of coping as that of Nigeria’s.

On the “no conspiracy theories” level, however…

END_OF_DOCUMENT_TOKEN_TO_BE_REPLACED

Anything on the agenda tonight that isn’t alarming and/or depressing?

END_OF_DOCUMENT_TOKEN_TO_BE_REPLACED

Report: Earth has lost half its wildlife population since 1970. http://t.co/tQgGBUIxbo pic.twitter.com/5zv6mxT01o

Hey, if you’re not dumb enough to lose your mind over the ebola, the WWF wants to make sure you’re properly depressed about the future. And they have the datasets to make the most depressing charts & graphs…

… The latest analysis was done by scientists at the wildlife group WWF, the Zoological Society of London and other organizations. Based on an analysis of thousands of vertebrate species, it concludes that overall animal populations fell by 52% between 1970 and 2010.

The decline was seen everywhere—in rivers, on land and in the seas—and is mainly the result of increased habitat destruction, commercial fishing and hunting, the report said. Climate change is also believed to be a factor, though its consequences are harder to measure….

The fastest declines were seen in rivers and other freshwaters systems, where populations have fallen 76% since 1970. By comparison, terrestrial and marine populations each fell 39%. While biodiversity continues to decline in both temperate and tropical parts of the world, the downward trend is greater in the tropics.

The most dramatic decline was in Latin America, where overall populations of mammals, birds, reptiles, amphibians and fish fell 83%. Asia-Pacific wasn’t too far behind, though.

The new findings are calculated using the WWF’s “Living Planet Index,” a measure of biodiversity based on trends in 10,000 populations of about 3,000 animal species…

The study says: “This ‘overshoot’ is possible because—for now—we can cut trees faster than they mature, harvest more fish than the oceans can replenish, or emit more carbon into the atmosphere than the forests and oceans can absorb.” Since the 1990s, we have reached that overshoot by the ninth month of each year, it adds.

“It’s a very loud wake-up call,” said Carter Roberts, president and chief executive officer of WWF U.S., in an interview. “As we lose natural capital, people lose the ability to feed themselves and to provide for their families—it increases instability exponentially. When that happens, it ceases to be a local problem and becomes a global one.”

More detail at the link. I assume the WSJ pundits will now find some MBAs to call it right-sizing a grossly inefficient overstock of environmental units? Or streamlining inventory per best JIT management practices?

(And, yes, Ebola infection in humans is the result of environmental degradation in desperately poor tropical climes. Synergy!)

END_OF_DOCUMENT_TOKEN_TO_BE_REPLACED

Welp, looks like we are all going to die.

A patient in a Dallas hospital has been confirmed to have the deadly Ebola virus, News 8 has learned.

That person has been held in “strict isolation” as he or she was evaluated for possible exposure to the virus.

This is the first case of Ebola confirmed in the United States.

In a statement issued Tuesday night, Texas Health Presbyterian Hospital Dallas said the patient was admitted based on symptoms and “recent travel history.”

On second thought probably not. Advanced countries have good protocols to fight diseases like ebola. We can track his or her contacts to identify everyone we need to watch, we have no tradition of handling messy corpses with bare hands (yech), there is lots of trust in the medical establishment and most major hospitals have good resources for isolating infectious patients. My only concern is that some idiot will get the anti-vaxxers riled up like Jude Law in Contagion, or the virus mutates in some crazy way. Otherwise this first case of ‘wild’ ebola in the U.S. should be one of the last.

If the patient was symptomatic in the airport then tracking back every contact will be hell, but authorities can still do it. Just about every square inch of an airport is monitored by cameras and passenger manifests are easy to check.

END_OF_DOCUMENT_TOKEN_TO_BE_REPLACED

Got back from the doctor and the diagnosis is an inner ear and outer ear infection and a throat infection. I also was told I am a jackass for waiting so long and given drops and cipro.

While I was at the grocery, someone scraped my car and just left w/o telling me and there are no cameras at the store.

All that is left to make today perfect is for the Pirates to lose.

END_OF_DOCUMENT_TOKEN_TO_BE_REPLACED

The owner of a gun range in Hot Springs, Arkansas this week declared that her business was a “Muslim Free Zone.”

In a post on her website, Gun Cave Indoor Shooting Range owner Jan Morgan explained why she had decided to ban all Muslims.

“This is not a coffee and donut shop. This is a live fire indoor shooting range,” she wrote. “In the range, people are shooting guns in close proximity to each other, so my patrons depend on me and my discretion regarding who I allow to shoot beside them. One mistake in judgement on my part could cost innocent people their lives.”

Banning certain people across the board would sound crazy if nobody ever rented a gun and shot up the range, but people do that! People like white gun nuts, and…well…pretty much just them.

Oak Ridge Gun Range, the scene of the latest suicide last week in Orange County, changed its policy after a previous death more than a year ago. Oak Ridge is now attempting to identify customers who would be a suicide risk.

END_OF_DOCUMENT_TOKEN_TO_BE_REPLACED

Behold: our neighborhood white squirrel, whom we call “Salt.” 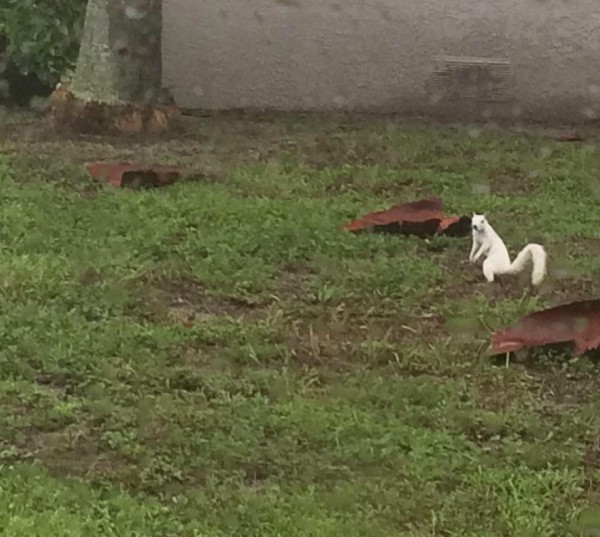 We’ve seen him around for several years now. At least I think it’s the same squirrel. Open thread!