Apparently the USA Freedom Act is now deemed of critical importance. But also, apparently, was going home for a week of recess.

In violation of best storytelling principles, I’ll give you the results first. From the Guardian, “Patriot Act powers to lapse at midnight as Senate fails to agree on NSA reform“:

In a double blow for Washington security hawks, represented by embattled Senate majority leader Mitch McConnell, it now looks likely that Congress will have to wait several days before passing that bill, the USA Freedom Act.

The reform legislation, which bans the NSA from collecting Americans’ telephone records in bulk, was initially opposed by McConnell. But with the clock ticking down toward the midnight expiration of broader powers initially granted after 9/11 under the Patriot Act, Republican leaders had few options but to get behind the bill as the best way of preserving other surveillance authority.

“This is now the only realistic way forward,” said McConnell as he conceded there was no longer time to seek alternatives to a version of the USA Freedom Act that was previously passed by the House of Representatives. Instead, the Senate majority leader is reluctantly embracing the House-passed bill to which he previously objected, only with the addition of what he called “a few modest amendments”.

McConnell’s concession was a tacit acknowledgement that the bulk collection of US phone records exposed in June 2013 by the Guardian, thanks to leaks from whistleblower Edward Snowden, will end.

The Senate voted 77 to 17 to proceed to debate on the USA Freedom Act. Even Paul, after the procedural vote, conceded that the bill will ultimately pass. “Tonight begins the process of ending bulk collection,” he said…

I very much doubt that any of the three-letter agencies consider this more than an annoying temporary glitch, but the Guardian earned their victory lap. And, as a Democratic partisan, it’s cheering to note that a bunch of Republican senators now have new grievances with each other, which is always fun to watch from a safe distance.

I’ve collected a bunch of the more entertaining tweets from earlier today, which I’ll put below the fold for those who find such quick hits confusing or annoying…

END_OF_DOCUMENT_TOKEN_TO_BE_REPLACED

Interesting piece on Bernie Sanders in the Politico of all places, and there is some good stuff as well as some stuff to quibble with, and the title gets on one of my pet peeves

Clearly the author is noting that his past ideas are NOT radical for the municipal mainstream, but neither are any of his current ideas radical nor were they ever radical. They’ve long been well within the mainstream. It is only within the media environment that we live in this delusional center-right nation. Much like the ACA in which the individual components are rated extremely popular by the public but they hate the overall bill, liberal and progressive ideas across the spectrum have long been the preferred policy choices of the majority, but you slam the name “Democrat” or “liberal” or “progressive” (FSM forbid “socialist,”), and they become toxic.

This isn’t something new. Marc Crispin Miller and the good folks at the Media Education Foundation (here’s a .pdf transcript of the linked video, Constructing Public Opinion: How Politicians & the Media Misrepresent the Public) and countless others have been pointing this out for years, but for some reason it never sinks in with the bobbleheads and the Democrats continue to be the worst salesmen in the world.

It’s just maddening. Not only are left-leaning policies better, but they are actually more popular. It’s enough to make you scream.

END_OF_DOCUMENT_TOKEN_TO_BE_REPLACED

You’ll forgive, I hope, the self promotion here, but I want to draw attention to an essay I have in The Boston Globe today.

It’s about the controversy over the Thirty Meter Telescope (TMT) that is beginning to be constructed at the summit of Mauna Kea on the Big Island of Hawaii.  Mauna Kea is one of the world’s most significant sites for optical and near infrared astronomy — it’s already home to thirteen telescopes, including the two largest now in operation in the twin Keck instruments. 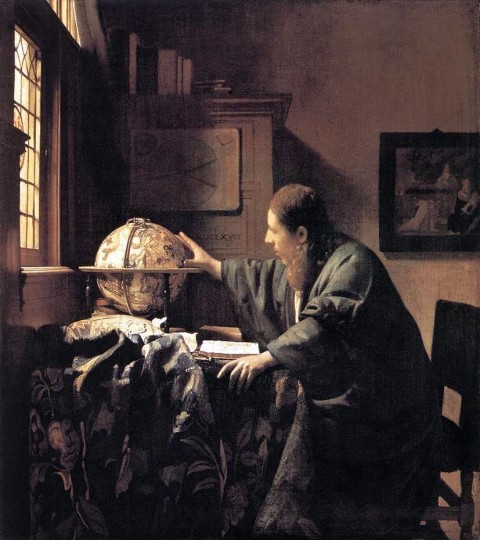 The TMT is designed to have a primary mirror three times the diameter of the Keck ten meter light buckets, with nine times the light gathering area.  Over the last century — which covers the era of large, mountaintop optical observatorys, each similar leap in telescope size has produced startling, powerful discoveries, and there’s every reason to expect the same of the TMT and its planned southern hemisphere counterparts.

But there’s a catch — or something more fundamental than a mere glitch.  Mauna Kea is a sacred site within the Hawaiian tradition, and an environmentally sensitive one, and opposition to TMT has grown from a point of tension to one of direct confrontation.  Construction of the TMT has been suspended, and the governor of Hawaii has called for the removal of a quarter of the existing observatories before the TMT itself begins operating.

In the midst of this confrontation, plenty of people have framed the two sides as another battle in the old war between science and religious belief.  I say in the Globe today that’s a mistake.  A taste:

….the TMT dispute shows where the science versus religion trope goes wrong. The Hawaiian protesters haven’t said that Mauna Kea’s telescopes are inherently impious, or that the data they collect is somehow wrong, or that Hawaiian mythology is a better account of the cosmos. Rather, the value, the joy, the need the observatories satisfy may indeed satisfy many, but not those continuing a Hawaiian tradition that allows its heirs to find connection with memory, with history, with nature — to achieve the same transcendence sought by those who find beauty in the measure of the universe.

That is: The TMT defenders and their opponents seek analogous rewards from their presence on Mauna Kea. Their conflict isn’t between the competing worldviews of science and religion, but between desires that are kin to each other — and that require the same physical space.

Check it out, if your Sunday afternoon tends that way.  Let me know what you think.

END_OF_DOCUMENT_TOKEN_TO_BE_REPLACED

Eastern Massachusetts was three inches short of rain for the month of May, till the weather gods decided to dump most of that on us during the last half-hour. So we’re not at the garden center, buying more potting mix, or in the garden, filling planters.

Apart from downpours, what’s on the agenda as the weekend winds down?

END_OF_DOCUMENT_TOKEN_TO_BE_REPLACED

Kinda surprising this number was allowed to slip past the DOT millennialists: 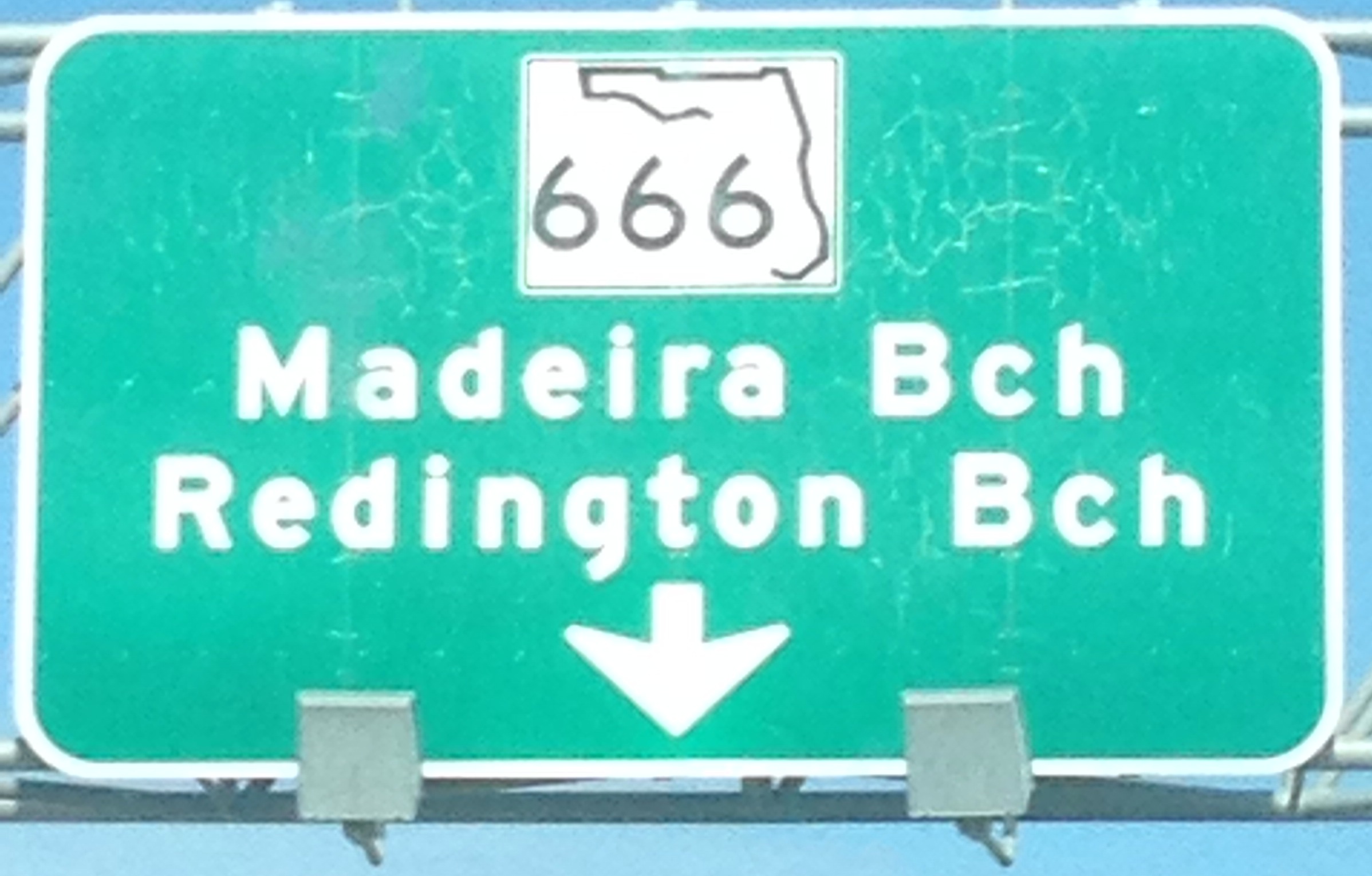 The highway casts travelers into a paradise rather than a lake of fire: 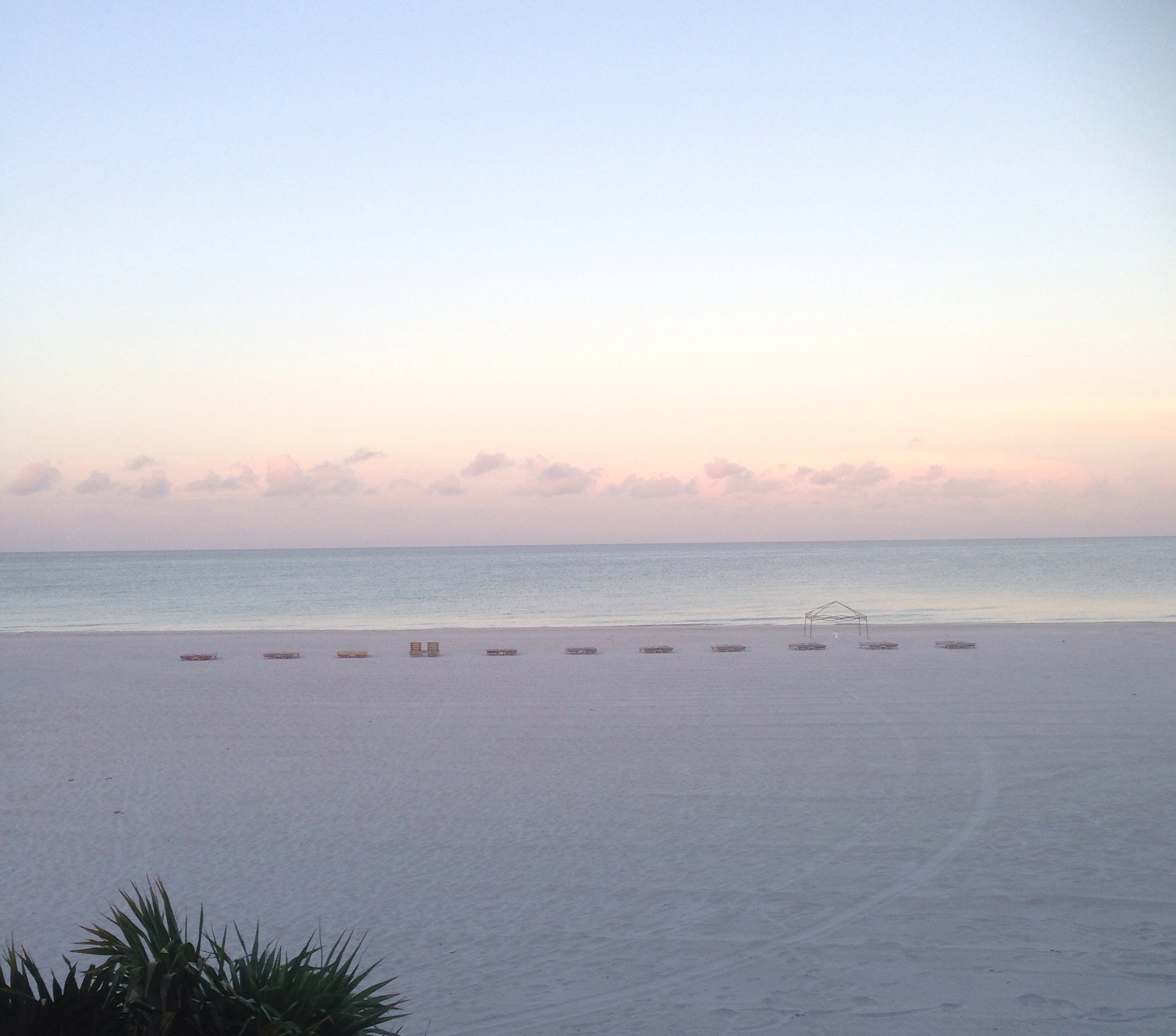 But once the sun rises over the yardarm, it’s every bit as hot as hell.

END_OF_DOCUMENT_TOKEN_TO_BE_REPLACED 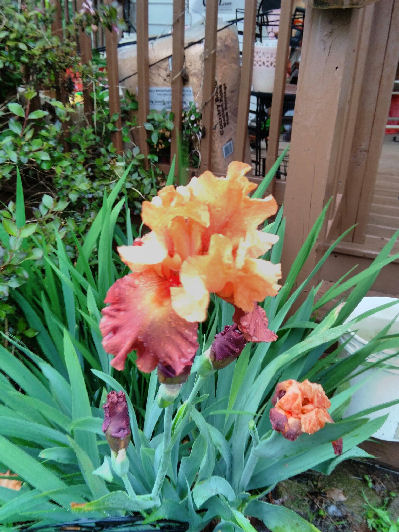 My Iris are blooming but with the rain we’ve been having they aren’t lasting very long. I was taking these in the rain today just so I could enjoy looking at them better before they’re gone. 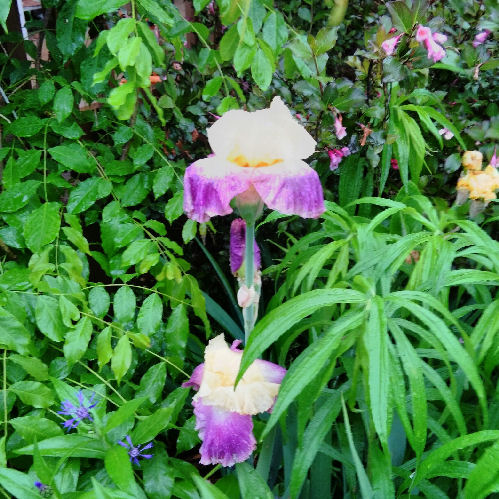 I’m actually a lazy gardener, so I prefer perennials and things I plant once and then just keep up. After I started to branch out from spring bulbs, bearded iris became my next favorite plants. The variety is amazing, and though the rhizomes can be costly, they multiply. These are mid-season bloomers, and a couple are reblooming, so I’ll have flowers on them again in the fall.

***********
Here in New England, I’ve got two dozen mail-order tomato seedlings waiting and I need to go buy many more bags of potting soil. And while I did get all the annuals safely into the flower beds & planters, I never found the time / energy to finish digging out the weedy mess at the end of my tomato row (driveway extension), so after I’ve finished rootpouching out all the new seedlings I have no idea where I’ll put them…

How are things in your gardens this week? 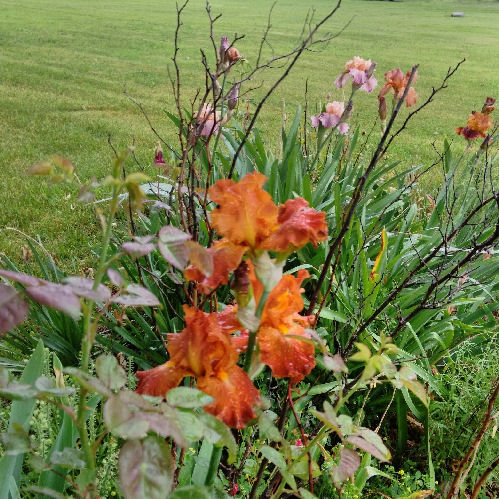 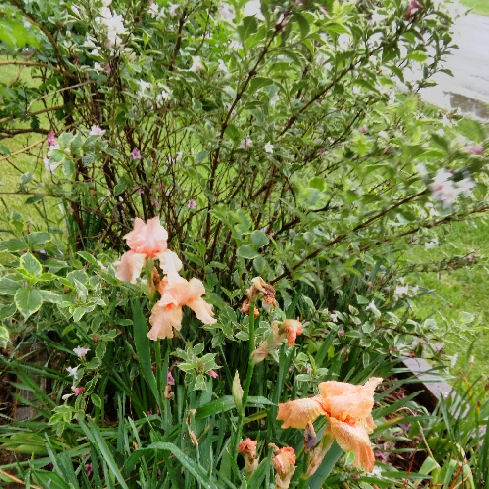 END_OF_DOCUMENT_TOKEN_TO_BE_REPLACED

Look at this rotten little bastid whose oil portrait I saw in a museum today: 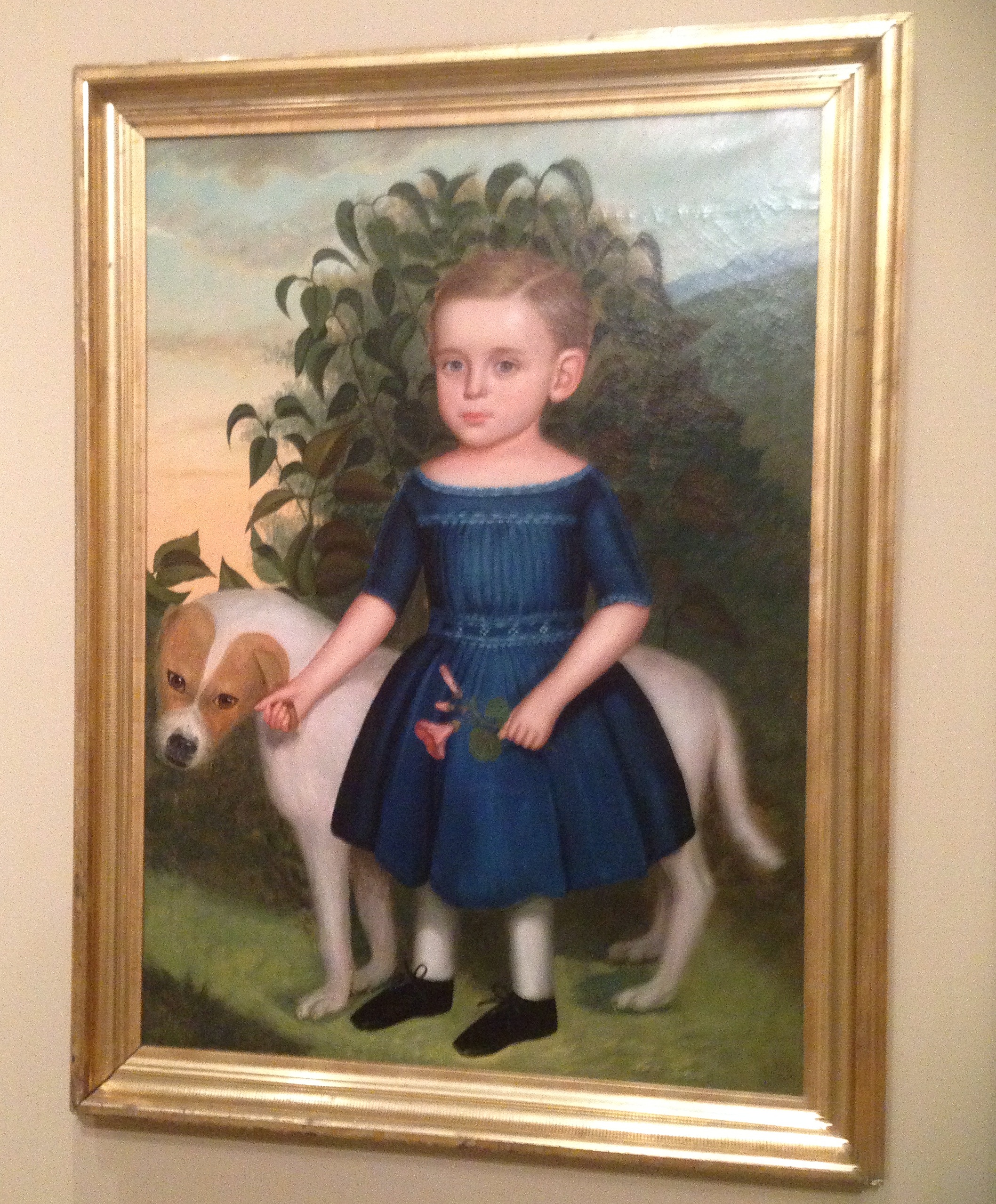 He’s angry about having to wear that stupid dress and pantalettes, which is totally understandable. But he didn’t have to take it out on the poor dog!

Maybe he’s an ancestor of Pete Campbell from “Mad Men.” There’s definitely a resemblance. Look at that forehead — you can tell the hairline will recede like a lunar low tide before he’s 35 (not that there’s anything wrong with that).

I’m up late reading “Oryx and Crake” by Margaret Atwood. What are you doing?