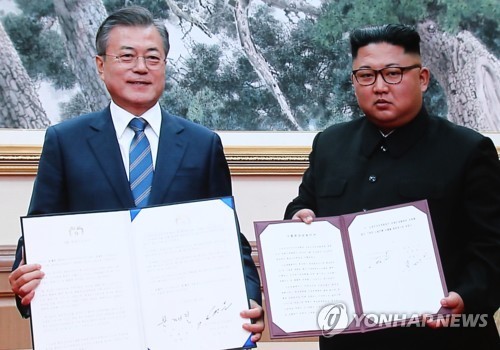 It’s best to rely on the official English translation of their joint statement, rather than statements for the news media or by third parties. The Korean version is more reliable, but I don’t understand Korean. Here’s the part about North Korea’s nuclear program.

The bottom line is that much more negotiation that includes the United States is necessary. Specifically,

the North will permanently dismantle the Dongchang-ri missile engine test site and launch platform – This is a positive step, but North Korea has developed mobile launchers for its missiles, including the intercontinental missiles that can reach the United States. Building a new test site would not be difficult.

under the observation of experts from relevant countries – Again, a positive step to include experts. North Korea explicitly excluded experts from observing the tunnel closures at its nuclear test site. But “experts” and “relevant countries” remain undefined. Defining them will require more negotiation.

The North expressed its willingness to continue to take additional measures – Willingness is not action, which is fine as long as we understand that.

in accordance with the spirit of the June 12 US-DPRK Joint Statement – Donald Trump talks about a handshake and personal understandings. North Korea talks about the Joint Statement. The DPRK is doing what is normally done in diplomacy. Secret personal agreements are no part of it.

The two sides agreed to cooperate closely in the process of pursuing complete denuclearization of the Korean Peninsula – “Complete denuclearization of the Korean Peninsula” is a standard formula describing an ideal situation in the far future. It’s good to have this kind of long-term goal stated. So far, the United States has taken that phrase to mean unlateral disarmament by North Korea. Again, look for Secretary Pompeo’s statement on this.

Previous Post: « The Big Bamboozle
Next Post: The GOP Is Exhausting – Now Updated With A Little Hope »