You are here: Home / Politics / America / Despite John Bolton’s Statement, the US Has Not Escalated Its Forces in the CENTCOM Area of Responsibility 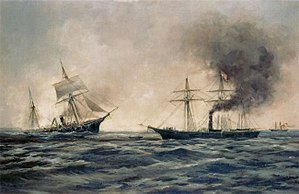 (The USS Kearsarge sinks the CSS Alabama off the coast of Cherbourg, France)

So what exactly is actually going on with US Naval deployments in the US Central Command (CENTCOM) Area of Responsibility (AOR)? Fortunately, the US Naval Institute has a Fleet Tracker. The most recent update is from 22 April 2019, it tells us the following:

deployed from Norfolk on April 1 and is now operating in the 6th Fleet area of responsibility in the central Mediterranean Sea. Last week, the CSG stopped in Palma de Mallorca, Spain, on April 15 and departed April 20.

transited the Suez Canal on April 20 and is now in the Mediterranean Sea in the U.S. 6th Fleet area of operations. Last week, the CSG exercised operations with French Navy aircraft carrier FS Charles de Gaulle (R 91) in the Red Sea.

Despite Bolton’s statement there is no additional Naval or Amphibious deployment. The Abraham Lincoln and the other vessels and units in its carrier group where already in the CENTCOM AOR and have been for some time. Almost as important is this simple reality: the Iranians know this! They know where US forces are deployed in relation to Iran. All Bolton has done with this announcement is make a lot of noise to hear himself make a lot of noise.

Thank you for joining us for this special first Sunday in May edition of John Bolton’s mustache’s saber rattling kabuki theater.

Previous Post: « Some Words of Wisdom From President Reagan In Regard to Foreign Interference in Domestic US Politics
Next Post: Monday Morning Open Thread: Hopes & Ambitions »