Reminder: Leto & Avalune will available for real-time conversation about this post on 3/11.  That’s this Wednesday around 7 pm.

Leto wrote a wonderful 4-page article, and excerpts are included in the post below. 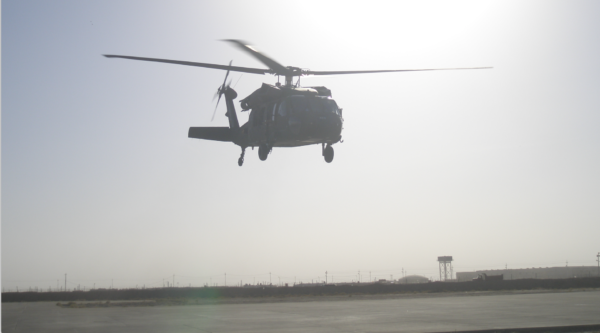 Deployments are a Fact of Life for the Military

Deployments are a fact of life for the military. Pre 9/11, deployments were something you hoped you were able to do. Deployments mean traveling to remote lands, making a few extra bucks via incentive pays, and potentially putting your training into use.

In the post 9/11 military, deployments are a matter of routine. You will definitely be selected for a deployment. In the Air Force, deployments are another way to earning rank because you typically earn a medal at the end of one, and medals are used in the point tabulations for rank advancement. Also there’s the “every one is getting in on the action, so I better get in on it before it dries up” mentality that’s always affected young people.

A deployment is made up of a lot of different items. The pre-deployment items are rather nondescript/routine: being cleared via medical and dental that you’re able to deploy.

Another item that we brief members on (and I’m sure Avalune will have a host of talking points regarding) is ensuring that our members’ families are going to be ok with them gone. That ranges from the simple things like, “Can we cut your grass? We’re going to cut your grass. We’ll be over Tuesday even if you’re not home and your grass will be taken care of.” to the more serious issue of, “Does your spouse know how to balance a budget? Can they pay the bills while you’re gone?

This is where we (leadership) step in. Because there’s nothing like getting a call from the spouse saying a collections agency is threating to turn off the electricity/water/repo the car because Airman Ding Dong hasn’t been paying the bills. So to head off that career ender, we have classes to help sort stuff like that.

On my side of things, I was a bit luckier that most in that I married a very smart woman who took care of all that even while I was home. It didn’t hurt that we made that arrangement before I went into the military (I worked, she did the budget), but as I look back on things it was also pretty darn smart. It freed me up to be able to focus on my job more effectively, which in essence is what we want for all of our people.

I’ve spent close to a thousand days deployed, but I’ve never really done what I was trained to do. My career field (3D1X3) is a rather catch-all career field. We maintain radio systems that span from the mobile/tactical world (think of the movies where you see the radio guy with the radio on his back: I can fix that) to what we call heavy earth terminals, i.e. any big satellite dish you see (I can fix that), to whole host of communications systems that people don’t really realize we work on, but yet we do.

My first deployment in 1999 was to al-Jaber Air Base, Kuwait, as a TCN watcher. A TCN is a Third Country National. When the DoD hires a company for, say, a construction project on a military base, that company in turn hires a subcontractor, who might also hire another subcontractor, who then in turn shows up with a work force of TCNs. These people are typically from very low-wage countries (East African, India, Pakistan, Djibouti for example) and they’re the main workforce that the subcontractor uses to build X.

In turn, we (the US) have to provide security to watch these people and that’s what I did. I was part of an 8-man team, 7 lower-enlisted and 1 NCO, and I spent the end of June through the first week of August watching people dig trenches for communications projects, bringing water onto base, and doing a whole host of dirty jobs that, in a just world, would definitely be worth more than about $40 a month.

Al-Jaber, at the time, was still an undeveloped base. That means that most of us lived in tents, would occasionally find a camel spider asking if we had a spare cig, and the heat was like nothing I can really describe. Most people talk about wet/humid heat or a dry heat… there comes a point where your brain is on fire and it’s just hot. Wet, dry… nope, it’s just fucking hot.

But that was a glorious deployment because, honestly, so little was expected of me.

My Most Dangerous Deployment

My third deployment was the longest, and also probably my most dangerous. I was “picked” for a 365-day deployment to Iraq. This was right as Gen. Petraeus was implementing his Surge campaign. I, along with 79 other AF personnel, was picked as part of the ILO program. ILO stands for In Lieu Of.

In, roughly, 2005 the Army went before Congress and basically said that the AF and Navy weren’t pulling their weight in Iraq. The Army was starting to deploy their people in 12- to 15-month stints, as well as starting to send some of those same people out for their third/fourth/fifth deployments.

The Army was basically asking for help, but in the most Army way possible. The AF and Navy, in true chicken-shit fashion, immediately rolled over, pissed on themselves, and gave up as many people as the Army needed. What that initially meant was that you had Air Force personnel, with basically no training, being door kickers on small-fire teams. As soon as the AF learned that’s what the Army was doing with its people, they freaked the hell out and actually stood up for us.

My Team on that Deployment

What my team, and the other 67 people going out to various places, did was logistics support. We were stationed at Kirkush Military Training Base, FOB Caldwell (https://en.wikipedia.org/wiki/Kirkush_Military_Training_Base). Kirkush is the equivalent of Lackland Air Force Base: it’s where all the new Iraqi army soldiers go for basic training. My team provided support in the form of communications training, medical training, fuels support, and a variety of different things.

We also provided support to the various MiTT (Military Transition Teams) stationed there. Those teams were responsible for going “outside the wire” (they left the confines of the base) and trying to win the hearts and minds of the local populace. Sometimes they also engaged the enemy. One of those teams was led by Major Andrew Olmstead (http://www.andrewolmsted.com/). That’s how I eventually found Balloon Juice, but that’s for a different time.

This was the first deployment where my family actually understood the danger I was heading into. One of the hardest things I’ve had to do was tell my son that’s where I was going, and to have him ask me, repeatedly, couldn’t someone else go? I tried to explain to him that I couldn’t do that to someone else, that I couldn’t ask someone to go in my place. But explaining that to a 10-year-old isn’t the easiest thing to do.

My responsibilities on this deployment were more substantial. I was responsible for all the radio equipment that my team would use for everyday matters, as well as for when we had to convoy locations. On top of that, most of us did some cross training with each other’s career fields. We did this to help each other out, but also in case the worst should happen. Because if you leave your most critical functions to just one person, that’s just asking for disaster to happen.

I’m going to skip over my deployment to Afghanistan and talk about my last deployment to Al-Udeid, Qatar.  This deployment was my second shortest at four months, but by this point in my career I was the leader of the team. I was the Non-Commissioned Officer in Charge of the radio shop. I led 8 other Airmen in maintaining various equipment, as well as just doing whatever the commander asked us to do (gotta keep the boss happy!).

By this point it wasn’t so much just making sure that I was ok, that my family was ok, but ensuring that all of my guys were doing fine. All of the things that I mentioned at the beginning: lawn care, financials, how’s the family doing? It was my responsibility to make sure all of that was taken care of for my team.

Yes, I could’ve relied on their home station supervisor to ensure it was done, but fuck that noise. 1) It’s within my scope of responsibility to ensure everything is taken care of, and if it’s not I’m going to make sure that it’s fixed and 2) it shows your people that you care about them. If you take the time to show your care about your people, they typically return the favor by going the extra mile when you need it.

The supervisors that I respected the most always made sure Avalune and the kid were squared away. That everything back home was taken care of, so that I could focus on the job at hand. Some did it for purely selfish reasons, but others did it because they genuinely cared. And while I have selfish reasons (the job needs to get done), for the most part I genuinely care about my people. If makes for a more pleasant work environment, if nothing else.

I hope this sheds a bit of light on the deployment process. While long, it’s abbreviated. So whatever questions you may have, toss’ em my way and I’ll answer to the best of my ability. Hopefully some of our other vets will also chime in because I love hearing what they have to say. I hope Cole can regale us some more with stories about storming San Juan Hill and what a bastard Teddy was after his sixth drink. Or maybe that was Omnes’ story? I don’t remember. Either way, have at it!