Some more of the Vogalonga because it’s fun, and national pavilions at the 2015 Venice Biennale.

END_OF_DOCUMENT_TOKEN_TO_BE_REPLACED 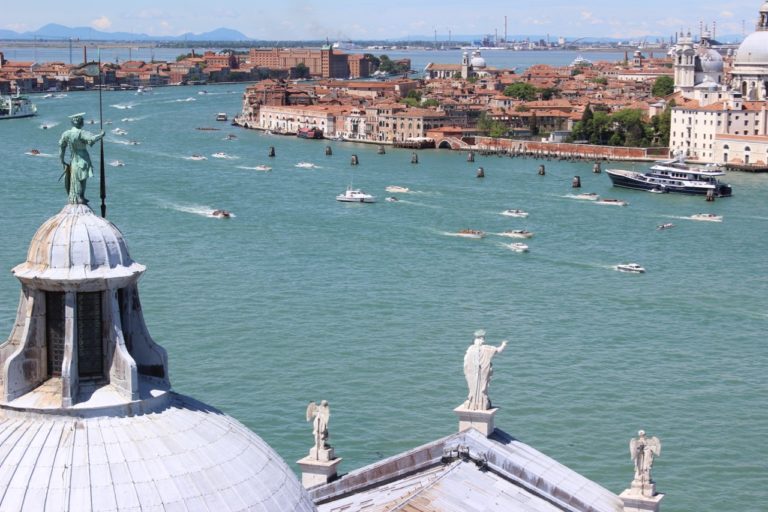 This is a view of the Grand Canal during the Vogalonga from the bell tower at San Giorgio Maggiore Church, on the island of the same name.  It gives you an idea of the size of the canal.  We occasionally saw cruise ships in the distance when we were eating breakfast.

The Rochester NY PD has distinguished itself once again by pepper-spraying (or, as they reported, using “an irritant”) on a 9 year-old girl in handcuffs.  Now, full disclaimer:  call me weak, but I can’t stomach watching a 9 year-old being pepper sprayed, so I didn’t look at the video.  My wife is built of sterner stuff than me, and for a variety of reasons, she’s much more qualified to observe what happened, so this is secondhand from her watching the video:

The police were called to a full-blown domestic disturbance.  One apparent factor in the disturbance was a mother who was out of control yelling at passers-by, and at the 9 year-old.  The 9 year-old had run away from home and, when caught a short distance from her house, threw a temper tantrum which included kicking officers.  They brought her to the ground and handcuffed her.  She was loaded into a police car after being sprayed.  The police ability to process only two modes of interaction — “comply, citizen” and “here’s your punishment for noncompliance” — were on full display.  The daughter apparently claimed that her mother had been stabbed by her domestic partner, a male who was not in the house, and it looked like there might have been blood on the mom’s clothes.  After a mental hygiene arrest and trip to the hospital, the girl was released to the custody of her parents.

Unlike the case of Daniel Prude, whose killing in police custody happened last March but was only revealed in September, this event happened Friday afternoon and was reported quickly.  In the aftermath of Prude’s death, a couple of different initiatives that would dispatch mental health workers instead of police to calls like this one were started.  According to the Monroe County Executive, Adam Bello, the county’s team was available for dispatch but was not called.  Rochester Mayor Lovely Warren said that that the city’s crisis team wasn’t summoned because the event generated a 911 call.  (Note that any statement by Lovely Warren should be treated as a lie until proven otherwise.)

After the Prude death, Police Chief La’Ron Singletary quit.  (He’s also sued the city, claiming that Mayor  Warren, who’s also under indictment for campaign finance violations, told him to lie about Prude’s death.)  The new interim police chief has suspended all the cops involved.  The case will be investigated by our new Police Accountability Board, which was established by a ballot initiative.  A lawsuit by the police union seeking to strip it of disciplinary powers has resulted in a preliminary injunction against the PAB being able to discipline cops, and that case is still working its way through the courts.

I thought this quote from City Council President Loretta Scott and Vice President Willie Lightfoot pretty much sums up the issue here:

“It is clear that law enforcement is not properly trained to respond to mental health crises. However, that does not relieve them of their responsibility to serve with empathy and compassion. “

In case it wasn’t clear from the way the cops treated them,  the child and her mom are black and live in a poor part of town.  Even though it’s 25 degrees and snowing off and on, protests are underway.  And this is a good cartoon.

END_OF_DOCUMENT_TOKEN_TO_BE_REPLACED

The COVID Tracking Project is a volunteer effort to collect the best available data on what the hell is happening in terms of tests, cases, hospitalizations, and deaths every day.  They have been running non-stop for almost a year now.  They are the best publicly available data in the United States.

They are ending their efforts next month:

Some important news about CTP: After a year of collecting, analyzing, and interpreting COVID-19 data for the United States—and months of preparation for what we’re about to announce—we’re ending our data compilation work on March 7. https://t.co/HtM9c0lwDB

It is not because the pandemic is over.

It is because they can trust that the Federal Government can and will be a reliable counter of critical things and also a reliable distributor of the data that they have assembled.

The COVID Tracking Project on its own is a massive success.

The COVID Tracking Project as the most reliable source of near-ish real time data is a stunning indictment of our society. A bunch of volunteers performing a key, essential and basic function for over a year into a national emergency because the government was unwilling to do so is stunning.

Now we’re just getting back to plausibly competent governance again.

END_OF_DOCUMENT_TOKEN_TO_BE_REPLACED

i think a good step going forward would be to stop asking shit questions. "do better" is rarely a useful line of criticism, but, you know, do better. https://t.co/ggG9Jsvcp5

END_OF_DOCUMENT_TOKEN_TO_BE_REPLACED

There are two easy ways to fail as a Democratic politician. The first is to listen to the bobbleheads in the media, and the second is to listen to the online left on twitter and elsewhere. The Biden campaign famously ignored both of them, including yours truly, who consistently lobbied for him to not run. So when you see the Politico writing that Biden and Harris fucked up by having Harris speak to West Virginians, or you see the dumbest man in American politics call it a mistake, ignore it.

There is a reason VP Harris spoke directly to West Virginians, as I noted the other day, and here you have the fruits of that labor:

“Well, first and foremost, I wish we’d all come together,” Justice responded. “But, on the flip side of that, we’ve got a lot of people in West Virginia that are still struggling with paying their power bill because they got laid off because this pandemic just swept their job away from them.”

Justice continued: “What we need to do is we need to understand that trying to be, per se, fiscally responsible at this point in time, with what we’ve got going on in this country, if we actually throw away some money right now, so what?”

That was Republican governor Jim Justice, when asked by the state’s biggest political radio guy, Hoppy Kerchival, whether or not the COVID stimulus needs to be bipartisan. The only people who give a fuck about Joe Manchin and whether or not this was a mistake by the Biden team are Joe Manchin and the beltway morons. Governor Justice and the people don’t give a fuck about process or procedure or whose feelings were hurt, they want results. They don’t give a shit about bipartisanship or Rand Paul’s feels about the budget, they want to feed the kids and keep the power on and make sure grams doesn’t die from the ‘rona.

And for those of you who are unaware how much of a big deal this is, Jim Justice was a Republicans who switched to Democrat and was Manchin’s hand picked successor to run, blunting a challenge from the left with Democrats Booth Goodwin and Jeff Kessler, eventually defeating Republican Bill Cole (no relation) in the general election. So this is Manchin’s boy ignoring him.

And you know what? Pelosi and Schumer just did this:

As President Joe Biden attempts to pass his $1.9 trillion COVID-19 relief proposal with Republican support, Senate Democrats are working to move ahead without the GOP using an obscure, but powerful, procedural tool known as reconciliation.

Pelosi and Schumer would not do this if they did not have the votes, so what you can bank on right now is that Manchin is one of those 51 votes in the Senate. So no, Biden and Harris didn’t fuck up by going directly to the people of WV and Arizona. They got Manchin and Sinema in line.

END_OF_DOCUMENT_TOKEN_TO_BE_REPLACED

As you may have heard, there’s a big nor’easter parked over the, er, Northeast right now. Huge volumes of snow, high winds, and even some thunder are expected throughout the region. New York City may see upwards of two feet over the course of the thirty-six hour storm. Here’s the view from my window right now. Samwise is loving it. We just moved, and have a good street view for the first time, so this is sort of his first big snowstorm.

He’s just been watching it all day, when he hasn’t been sleeping. Some pigeons came to chill out on the windowsill for a while. Being the big city pigeons that they are, they were unfazed by a cat staring at them with murder in his eyes.

Anyway, we’ve been staying in, and would have been even if there weren’t a raging pandemic. Did some work. Made some pasta. Going to do a Chinese cumin beef thing we like tonight. Nothing to report, really. Just thought we could use a nice thread.

I have this song stuck in my head at the moment. I think of it whenever there’s a big snowstorm. What are some weathery songs you all like?

END_OF_DOCUMENT_TOKEN_TO_BE_REPLACED

Sometimes punditry is fouled by contaminants that keep you from experiencing its full-bodied, high-octane mixture of speculation and freshman-political-philosophy-seminar level of relevance to everyday life.  This is not one of those times:

Put aside the question of whether it should be the top 20 countries or top 5 or even just US, EU, and UK. I'd like to hear from health experts who oppose this why something like it isn't a good idea — or is it a good idea and the politics are just hard? https://t.co/QOIynmMfDU pic.twitter.com/UgrbEpSuYL

Why, pray tell, would health experts oppose a free-for-all where someone signing a piece of paper (tracked by what entity) can buy some random drug approved in the EU (prescribed by, and sold by, someone and something)? I can only imagine a hundred or so reasonable objections to this asinine and half-baked idea.

The article containing the quote claims that the US doesn’t have the Astra-Zeneca COVID vaccine because it wasn’t a US pharma company that invented it, and this is a pattern with the FDA. That could be, but color me skeptical. The notion that we need to bypass the FDA using some kind of Walter Mitty machinery, instead of pressuring the FDA to approve the Astra-Zeneca vaccine, is like saying that my car doesn’t accelerate well on the freeway, so I’ll strap rockets to the roof.

I’d just chuckle and move on if this guy wasn’t one of our most “important” opinion writers. It’s pure David Brooks to dip into some econ journal, pull out a dumb take, and broadcast it to the world, while prefacing it with even a dumber take.