You are here: Home / Archives for Clown car 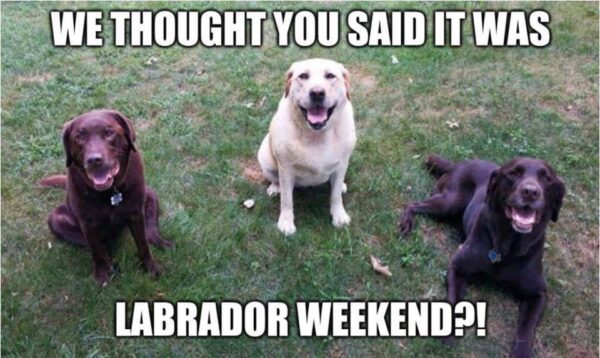 "The bottom line is jobs are up, wages are up, people are back to work. And we're seeing some signs that inflation may be — may be, I'm not over promising — may be beginning to ease," Biden says at the White House, reading from prepared remarks on the jobs report

END_OF_DOCUMENT_TOKEN_TO_BE_REPLACED 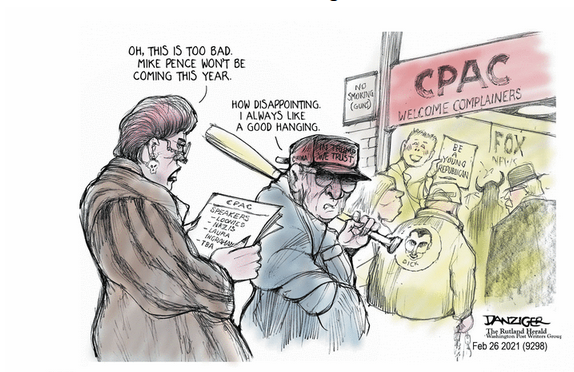 CPAC’s always been a grift bazaar — excuse me, celebration of capitalism. But until a couple years ago, it was also a gathering where the old pros could parade their laurels and the young hopefuls could strut their stuff, like a right-wing political ComicCon. Post-Trump, it’s reduced to one of those flea-market-adjacent ‘popular culture shows’ where you can buy signed photos with Scott Baio’s understudy, two of the recurring characters from the Dukes of Hazzard, or Clint Eastwood’s orangutan wrangler…

END_OF_DOCUMENT_TOKEN_TO_BE_REPLACED

Bitter GOP split upends the pomp as a new Congress takes over https://t.co/vfptmw7WmJ

END_OF_DOCUMENT_TOKEN_TO_BE_REPLACED

Polls opened here in #Londonderry at 6AM. One voter told me she was the 1,501 person to vote. Steady turnout so far this morning! #NHPrimary pic.twitter.com/dv5ZvkSmBX

NEW – @AndrewYang is dropping out. Late last night, we sat for an exclusive interview about what’s next for him, what he wants out of the Yang Gang and what the other candidates need to learn from his https://t.co/L6oSkr0mK5

NEW – @MichaelBennet is dropping out too. “Whether you knew it or not, we were having a great time together,” he says of New Hampshire in Concord. “Tonight is not going to be our night. But let me say this to New Hampshire. You may see me once again.” pic.twitter.com/jsHE4gb9Dc

I’m sure Bennet is a fine Senator, and may even become president in some less fraught year, assuming we survive this one. And Andrew Yang… meant well. But with a better signal-to-noise ratio, maybe Kamala Harris and/or Cory Booker and/or Julian Castro are still in the race right now. So my sympathy for these guys is limited.

Take a hint, Deval Patrick. Maybe Mike Bloomberg will offer you a cabinet position, if you drop out and endorse him before Super Tuesday.

Hardly worth complaining about Tom ThStheyer, because only the threat of violence or a big on-camera french kiss from Bernie could get him to go away now, and I’m not sure about the first one.

One thing remains true: No one really knows what’s going to happen. Let the voters vote.

It really doesn't get sadder than this. https://t.co/V5rkLidgpK

Reminder: NH Is for Ratfvckers –

"I hear a lot of Republicans tomorrow will vote for the weakest candidate possible of the Democrats," Trump says of the crossover primary in NH, where independents can vote in either primary.

Horse-race touts, of course, are lovin’ it.

NEW from me on the coming war of attrition and why this Democratic field is so flawed that even Biden still has a chance https://t.co/8TX0KZ0Ooz

END_OF_DOCUMENT_TOKEN_TO_BE_REPLACED

I’m sorry, Iowans, you’re lovely people and I’m sure you mean well, but this is not an optimal way to select the leadership for a country as large and diverse as ours. Because the rest of us are tired of finding euphemisms — unpredictable! — for the fact that too many of you are actually insulated from the effects of your choices:

This doesn’t surprise me. It’s politics as lifehack. She’s looking for One Weird Trick that will solve all of America’s problems. Revolution! MAGA! A gay millennial! The only surprise is that she’s not supporting Yang, the ultimate lifehack candidate. https://t.co/fGwOK1wFlv

There is a common thread through all of that—the willingness to vote for a white-nationalist president, and her utter disregard for her vote’s effect on Trump’s targets. She is using his re-election like a gun pointed at the head of a hostage. Pick my guy, or the country gets it.

And, no, you’re not responsible for the DNC’s weirder efforts to please all its warring factions, but if we weren’t all fixated on your antiquated caucus system (yes, and NH’s cranky insistence on being FRIST IN THE NATION, forty-nine other states be damned), the DNC would have a much more practical path…

(AP) — For the first time, the Iowa Democratic Party will report three sets of results from the party’s presidential caucuses. And there is no guarantee that all three will show the same winner.
(from @AP) https://t.co/9CKr64MWYL

NEW from me and @POLITICO_Steve: Iowa Dems are bracing for a messy caucus night with potentially more than one candidate claiming victory. https://t.co/fX1ROYlSOB

… “I think that people need to idle their engines a little bit,” says Penny Rosfjord, an Iowa Democratic Party district chair. “A caucus was never meant to be smooth; it’s kind of a messy process. It’s not a straightforward, check a box and move on.”…

In Iowa, approximately 30% of registered voters are Democrats.

Of that number, approximately 15% participate in caucuses.

4.5% of Iowa’s population participates in the Dem caucus.

Hardly representative of the state let alone the country.

My hot take on this is that the more spinnable the results are for multiple campaigns, the more Iowa’s value as an electoral tastemaker diminishes. https://t.co/9fympWdrFB

Of course, it’s never easy to give up a perceived entitlement...

Counterpoint from other readers: “Democrats have tried to make them accessible. Blame the national party.”
“Sour grapes?”
“It’s on the candidates to try to sway the voting populace by getting out and campaigning.” #iacaucus https://t.co/ouaaxiZDLZ

… but once you’ve laid down this burden, we’ll all be happier voters!

END_OF_DOCUMENT_TOKEN_TO_BE_REPLACED

New: Lev Parnas is seeking permission to share a bunch of new material with House Intel, including the contents of an iPhonehttps://t.co/g1d538fbgG

Lev Parnas, a former Rudy Giuliani associate charged with financial crimes, is looking to share more material with congressional investigators, according to a letter his lawyer has sent to a federal judge. The letter, filed in court on Monday evening, indicates that the committee first tasked with helming the impeachment inquiry is gathering additional evidence about Trump World.

In the letter, Parnas’ lawyer Joseph Bondy said the Justice Department will share materials with his client on Tuesday that it seized from his home and at his arrest. The materials include documents and the contents of an iPhone. Bondy then asked Judge Paul Oetken of the Southern District of New York to allow him to share those materials with the House Intelligence Committee; a court order currently bars him from sharing them with anyone. The Justice Department has said it does not object to him giving the material to Congress…

Trump’s relationship with Ukraine—in particular through his intermediary and personal lawyer Giuliani—is at the center of the impeachment process. Parnas had a front-row seat to much of Giuliani’s Ukraine-related activity.

Federal authorities arrested Parnas and his associate Igor Fruman at Dulles Airport in October and charged them with conspiring to illegally funnel money from a foreign national into an American election. For many months before their arrest, the two worked with Giuliani to investigate allegations about former Vice President Joe Biden’s son Hunter, who served for a time on the board of a scandal-dogged Ukrainian energy company…

Parnas and Fruman, both Soviet-born U.S. citizens, made hefty political contributions through an entity they started called Global Energy Partners. And they built connections on Capitol Hill; after then-Rep. Pete Sessions sent a letter to Secretary of State Mike Pompeo calling for Yovanovitch’s removal, a PAC the pair supported shelled out a huge sum to boost his re-election bid. Sessions’ name was also batted around within the Trump administration as a potential replacement for Yovanovitch, though any efforts to install him there didn’t get traction.

Parnas and Fruman have both pleaded not guilty. And Parnas indicated he would cooperate with the congressional impeachment inquiry. Because of his close proximity to Giuliani, he may have significant visibility into Giuliani’s actions that other witnesses lack. For instance, a senior Zelensky aide confirmed to The Daily Beast that Parnas was present for a meeting he had with Giuliani where they discussed the U.S.-Ukraine relationship…

Guess we’ll know from the Oval Office Occupant’s tweet-stream — or Giuliani’s — how successful efforts to hide this news from him have been. As if the festivities at Mar-A-Largo weren’t fraught enough already.

Credit for Individual-1’s obsession with appearances, though; Parnas looks exactly like the bumbling minion in a spy caper who inadvertently betrays Mr. Big, doesn’t he?

END_OF_DOCUMENT_TOKEN_TO_BE_REPLACED

Incredibly cursed and also substantially less unrealistic than you would hope https://t.co/1teA7YAPxI

I mean, Priebus is out there too while we’re at it pic.twitter.com/F0DBlMxwLK

I *think* we can still joke about this, because Spicer doesn’t “look great on TV”, and Priebus hasn’t shown sufficient doglike loyalty to the Oval Office Occupant. As long as Pete Hegseth doesn’t want to give up his Fox News duties…