You are here: Home / Archives for PUMA = Propping Up McCain's Ass

On Friday, David Frum, the former GWB speechwriter who invented the phrase “axis of evil” to sell his boss’s pointless war, published a piece in The Atlantic chiding Hillary Clinton for playing the victim card. He cites as evidence quotes cherry-picked from a recent interview Clinton did with Christiane Amanpour and also HRC’s supposed obsession with the non-existent “whitey tape,” as reported by rancid horserace hacks Mark Halperin and John Heilemann in “Game Change.”

The day after Frum’s piece ran, the NY Post released an excerpt of Edward Klein’s “Blood Feud: The Clintons vs. The Obamas,” a title from wingnut screed factory Regnery Publishing, which publishes titles like “The Roots of Obama’s Rage,” by Dinesh D’Souza, “The Case Against Barack Obama,” by David Freddoso and “Crimes Against Liberty,” by David Limbaugh.

In its inimitable style, the NY Post titled its sneak-peek “The feud between the Obamas and ‘Hildebeest.’” It contains stunning insights into the enmity between the first couples, such as that Bill Clinton hates President Obama “more than any man I’ve ever met, more than any man who ever lived” and that when President Obama and Mrs. Obama had the Clintons over for dinner at the White House, the president ignored his guests to play with his BlackBerry instead.

Steve M at No More Mr. Nice Blog reviewed the NY Post preview of “Blood Feud” yesterday and noted that “[w]hat Klein seems to have written is a bad pulp novel, disguised as non-fiction, made up exclusively of right-wing gossip, right-wing talking points, and right-wing punch lines.” He’s right; it’s a steaming load of anonymously sourced horseshit, just like everything Regnery publishes.

I’m not someone who wants to coronate Hillary Clinton as the Democratic presidential nominee for 2016. I want to see a vigorous debate in the primary that brings liberal issues to the fore, and I’m hoping a viable candidate whose platform more closely matches my views emerges — just as Obama did in 2007 to capture my support. I would prefer that this happens after we retain the Senate and make gains in the House in the upcoming midterm elections.

But damned if we Democrats should allow wingnut concern trolls like Frum, Klein and Halperin to shape our views on any candidate — or anything at all. They are cynical, lying hacks, so why should we believe anything they say? What this recent emergence of high-profile wingnut concern trollery tells me is they think they’ve found a wedge to exploit. We shouldn’t let them.

Like many Obama supporters, I was pissed off at some of the Clintons’ tactics during the endless 2008 primary. But the Clintons and Obamas sure seemed to bury the hatchet and work together after that. Even if they despise one another (and there’s no credible evidence of that that I’ve seen), they made the calculation that working together was the best thing for the party because a feud would play into the Republicans’ hands. It was true in 2008 and 2012, and it’s still true today.

The piece by Frum and the latest Regnery Publishing bilge are cynical attempts to divide Obama supporters from a possible Democratic nominee, just as John McCain’s selection of Sarah Palin was a cynical attempt to peel off HRC-supporting Democrats in 2008. It should fail just as hard.

END_OF_DOCUMENT_TOKEN_TO_BE_REPLACED

Pat Caddell, the resident “Democratic” pollster for Fox News, who is much the same way a “Democrat” as Geraldine Ferraro was a civil rights pioneer and Dick Morris is a fervent Democratic partisan, has a major, major sad:

Oh, you poor baby. When Romney loses, can you promise to move to Brazil with the rest of your ilk until you drop dead and stop providing wingnuts with the opportunity to say “Even the liberal Pat Caddell…” Trust me, I bet Marty Peretz will join you, and you boys in Brazil can have lots of fun conversations about why black people stink, the problems with the untermensch Palestinians, why gays should shut the fuck up and be second class citizens, and how Nancy Pelosi ruined America.

Or, you both could just fuck off and die, hopefully choking to death on your own bile.

BTW- notice that it never occurs to Caddell that the reason Romney is failing is because his ideas are awful, the Republicans are insane and dangerous and represent about, well, 27% of America, and he is out of touch with America. No, no, no… It’s just bad messaging. That’s like saying rectal cancer is unpopular only because it has a shitty logo and the jingle sucks.

END_OF_DOCUMENT_TOKEN_TO_BE_REPLACED

Today, Democrats from across America have been getting robocalls from Zombie-PUMAs. I got one of them this afternoon in Baltimore. Sam Stein and others have posted the audio, which has your typical free-from-the-constraints-of-reality PUMA rant:

America would be better off today if Hillary Clinton was our president. The Wall Street robber barons would be jailed, young people could afford college and find jobs and six million homeowners wouldn’t face foreclosure. We need to change our course. Please sign our petition to draft Hillary Clinton for president.

The message pimps a PUMA fronting web site with no information about who is behind the effort. Well, almost no information. Each page of the site proclaims the effort is: “a project of the 99%”, which is kind of funny because in 2008 the goal of the PUMA movement was to help John McCain and this year’s effort seems designed to help the next Republican nominee. I’m betting the “99%” line has the 1-percenters funding this effort pissing their pants from laughter.

Some blogs and news organizations are reporting on the robocalls and some are leading with the notion that the 99%/OWS movement is organizing the effort to draft Hillary. (Proof that just placing a tag line on your web page can generate results!) I expect that by the morning the “serious” people of our media and blog-o-sphere will be discussing this grift as a real movement and another “proof positive” sign that the “Left” hates President Obama just as much as the “Right”.

It will be interesting to learn which wingnut asshole is funding this effort to reanimate the PUMA corpse. So far, I think it’s safe to assume that the comedy team of Caddell/Schoen is on that wanker’s payroll.

END_OF_DOCUMENT_TOKEN_TO_BE_REPLACED

Remember when this blogger was our reside PUMA troll?

Any bets on how long before someone claims he (Cain) was dogwhistling to the white racists that “he knows his place” by singing an old negro spiritual?

Seriously though, he was dogwhistling – to black Americans. He was reminding the black community that he is one of them. If he can win over a big chunk of their votes he’s not just electable, he’s unbeatable. No other Republican candidate can do that.

I wonder how many hymns Barack Obama knows by heart?

So hard to tell if this is spoof or not. It’s such a fine line between clever and stupid.

END_OF_DOCUMENT_TOKEN_TO_BE_REPLACED

This is really sad. “Whose side are you on?” That’s straight up wingnut warblogger talk circa 2003.

END_OF_DOCUMENT_TOKEN_TO_BE_REPLACED

This has so much win in it that I can barely contain my glee.

END_OF_DOCUMENT_TOKEN_TO_BE_REPLACED

This will be awesome: 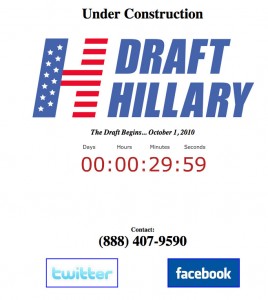 Hillary would have gotten the public option. Just sayin’.

Although these guys are setting themselves up for disaster. If my memory is correct, the Clintons are pretty good at avoiding being drafted.