I don’t have any answers for you guys. My heart tells me that Steve Benen has it right. HCR will die quietly on some back burner while everyone involved declares that they’re determined to get it done. You guys have done more good that I could have hoped by even keeping the issue this long, considering how eager Democrats all the way up to Barney Frank seemed to run away from HCR like a hot fuel rod after the Coakley defeat. There was a tangible shift in momentum after that awful first day or two where you could clearly see House Democrats in particular start speaking about the issue with a sense of urgency again. I don’t think it’s a stretch to say that you guys had something to do with that.

However, I’m concerned that Rahm is either winning the internal White House debate, or he’s winning it by default by getting his side covered in the press every day.

Mr. Emanuel said he believed it was still possible for lawmakers to pass the far-reaching overhaul Mr. Obama wants, though he did not offer procedural specifics. But he said he expected Congress to move on Mr. Obama’s economic agenda — a jobs bill, a deficit reduction measure and a financial regulatory overhaul — before returning to the health measure.

Steve had it right. Go slow means don’t go at all. The idea that Dems will rally together three months further into campaign season is crazy.

Readers like you have reported that a huge number of House Democrats might commit to passing the House bill, but they need some leadership from the White House, especially if the only plan for Senate reciprocation is hope. Obama provided nothing in his State of the Union in that regard. He gave no cover for PTDB in the House to PTDB, in fact fact he transmitted no sense of urgency at all. If HCR dies Obama’s happy address will provide a textbook case of the Benen model. It concerns me that in a vacuum of leadership from Obama himself, these Rahm drippings will carry more weight than will any combination of citizen calls.

But maybe I’m wrong! Maybe pressure from you and me will move 218 Congressmen to pass the Senate bill before it dies of neglect. Maybe positive noises from Kent Conrad and David Axelrod signal that the double-plus win scenario of Senate bill plus reconciliation fixes could still happen.

I’m not convinced. The fragile mental state of Democrats like Max Baucus puts any progress in the Senate at the mercy of even one Republican willing to negotiate in what looks like good faith, then back out of the deal, then demand more concessions, then keep everyone at the table for a few more months, and then get cold feet again. To get 50 votes we need Baucus, Pryor, Lincoln and Jim Webb and Mark Warner and several others, yet these guys will certainly jump for months at any meager bait that Olympia Snowe chooses to dangle.

What to do now? Can we motivate enough House members to pass the Senate bill when the White House won’t cover their ass? I don’t know. Share your thoughts in the comments. If you work in DC and would rather communicate privately, email me and let me know what you have heard.

Regardless of what you do, this by Corner Stone qualifies for Comment of the Month.

I haven’t seen it mentioned anywhere but I’m wondering something. What if everyone who called their Rep during this crisis actually kept calling them? Not to chastise but to “check in” so to speak. Once a month (or maybe twcie or whatever) just call in, ask to speak to the same legislative aide (or lower level phone answerer or whoever you eventually get a hold of) and just let them know you’re paying attention and want the Rep to know you’re rooting for them (or whatever chummy message or not so chummy message is appropriate – whatever).
The point being – when a real crisis comes through like HCR, or education bills, etc a big handful of people will have a recognized pipeline into their Reps’ office.
“Hey Timmy it’s Bill Johnson, how are you today? Yeah that’s great. Listen, about this whole education bill HR666 coming up for a vote…how is Rep. Tightshorts going to vote on it? Yeah, I know it’s tough. Remember my grandson we talked about? Yeah. He’s a perfect example of who could be helped, who could have his whole life changed by this.”
Anyway, why let this drop and be a one-and-done?

Indeed. Make it so.

END_OF_DOCUMENT_TOKEN_TO_BE_REPLACED

Get ready for several hours of conventional wisdom every week, as Candy Crowley is taking over CNN’s State of the Union. At least she has a great voice- one that I have always loved.

We should keep a running count of how manytimes she trots out her patented “some people say” crap, although that would require watching.

END_OF_DOCUMENT_TOKEN_TO_BE_REPLACED

Presumably Rahm Emanuel is blackmailing him, or he’s one of those Reid-bots or Pelosi-bots we’re always hearing about:

There seems to be little to endear citizens to their legislature or to the president trying to influence it. It’s too bad, because even with the wrench thrown in by Republican Scott Brown’s election in Massachusetts, this Democratic Congress is on a path to become one of the most productive since the Great Society 89th Congress in 1965-66, and Obama already has the most legislative success of any modern president — and that includes Ronald Reagan and Lyndon Johnson. The deep dysfunction of our politics may have produced public disdain, but it has also delivered record accomplishment.

END_OF_DOCUMENT_TOKEN_TO_BE_REPLACED

You know the drill!

END_OF_DOCUMENT_TOKEN_TO_BE_REPLACED

I have been enjoying the clips of President Obama kicking it old school with the House GOP in my hometown of Baltimore yesterday. There were many enjoyable moments, but I really enjoyed part of the exchange with Rep. Chaffetz of Utah. The Freshman GOPer was in full concerned troll mode as he baited President Obama with his “sadness”.

END_OF_DOCUMENT_TOKEN_TO_BE_REPLACED

Here is a nice story after a long, long week (for me, at least): 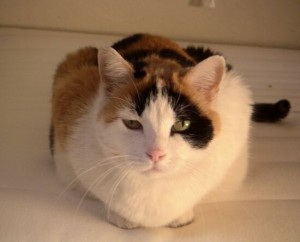 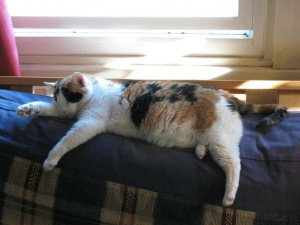 My cat (I call her by different names all the time but the most used one is “G. G. cat” or “G.G.”) and I became friends when she still belonged to my neighbor five years ago. Among the five cats my neighbor owned, somehow GG likes to visit me the most. She would wait at the door step every evening for me to come home from work. She would give me dead birds as presents (now I keep her mostly indoors so she wouldn’t bother the birds anymore)…

Then the neighbor (she was very old) died and her relatives wouldn’t have anything to do with the cats. So I adopted GG as the other neighbor took care of the rest of the four. I would have gotten another one, which also visited me a lot, if GG weren’t so bitchy about it.

Never having had any cat before, It is all a new adventure for me and one of the best things I have done in my life.

She is the joy (or the center?) of our family. My husband and I sometimes call her our alien overlord or the Queen.

Anyway, here are some pictures of her doing her favorite activities. She also sits on my chest every morning to get me to feed her.

PS. I think GG and Tunch have very similar faces and body shapes.

This is my favorite pic: 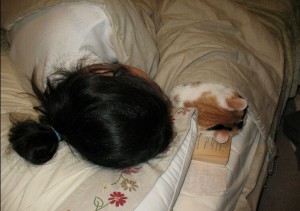 Cute cat. I definitely detect some Tunchitude in the first pic.

END_OF_DOCUMENT_TOKEN_TO_BE_REPLACED

I’m glad this is happening:

The Mental Health Parity and Addiction Equity Act of 2008 interim rules were issued by the Obama administration and showcased today on January 29, 2010.

The law is officially known as the Paul Wellstone and Pete Domenici Mental Health Parity and Addiction Equity Act of 2008. The law essentially requires employer-sponsored health plans to provide coverage for addiction and mental illness on a level consistent with other health problems.

I have a friend who volunteers for several mental health organizations who is very happy with these changes. Hopefully some of you with some expertise can explain what the changes are from the status quo and why this is such a big deal.