You are here: Home / Economics / Free Markets Solve Everything / The Tea Party Dive

The Tea Party traces its roots to some millionaire Wall Street media star whining on the teevee. It is the bastard child of our Galtian overlords. And I guess they thought their creation was cute when it went around yelling that the Gub-a-mint needed to keep its hands off their Medicare. It seemed the Tea Party was just fine as long as the noise they made helped to protect the wealth of the elites. But a funny thing has happened.

It turns out that the Tea Party is bad for business. It seems that a movement rooted in rage–fueled by racism–and acting without any grounding in reality will fuck things up when it gets power. Who knew? Who could have predicted it?

But they did get power and they have Fucked things up Big Time. The Markets and the invisible hand now tremble with fear about what their little monster might do next.

And their reaction should be called The Tea Party Dive.

Wall Street has realized that their astro-turf creation doesn’t give a rats ass about markets, jobs, stability, reality or any of that shit. All the Tea Party wankers care about is the purity of their fantasies–and if the global economy must be destroyed in pursuit of their myths, delusions and talking points, well so be it. 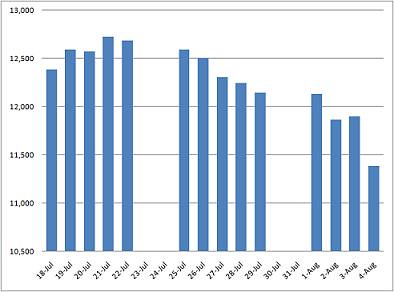 And if you look at other economic indicators you’ll see other signs of damage since the Tea Party and their rich fantasy life extremism took over the Conservative movement and the National debate about our economy.

These people are batshit crazy. They will burn it all down in the belief that an Ayn Rand Jesus will look down and bless them with his/her tinkle as they muck about in the ashes.

Their plans for America’s future make less sense than Klaus Kinski’s plan–at the end of Aguirre, the Wrath of God–to use his new monkey army to conquer the world. And yet, Aguirre’s final dreams of conquest were more rooted in reality than the ideas of your average TeaBagger. And now these lunatics have real power to destroy things and so things break.

Our Galtian overlords have lost control of their little monster. They fear the coming waves of TeaBagger harm to the economy and so we have The Tea Party Dive.

And with that how about an open thread.