Looks like I will be heading to the People’s Republic of Madison again in August (not telling you when, and no I do not want to meet you for drinks/dinner/a round of hookers. No offense. I’m just an agoraphobic misanthrope and the fact I am traveling is stressful enough. I’m sure you are very lovely people, with sparkling wit, a generous spirit, a deep intellect, and a flair for casual banter. I just have no desire to meet you. I apologize.).

I intend to go to the Tornado Room again, because it really was the best filet mignon I have ever had. And the Coquille Saint Jacques will make a grown man cry.

At any rate, I’m not really looking for iconic locations in Madison- I can find those on my own. I’m looking for hidden gems that others might miss.

And I must once again state, on the record, that Madison, WI, Athens, GA, and Austin, TX, are the greatest places in the US (besides my back porch). Y’all can have your NYC and San Fran and LA and the other places. I’ll take those three and not think twice about it.

END_OF_DOCUMENT_TOKEN_TO_BE_REPLACED 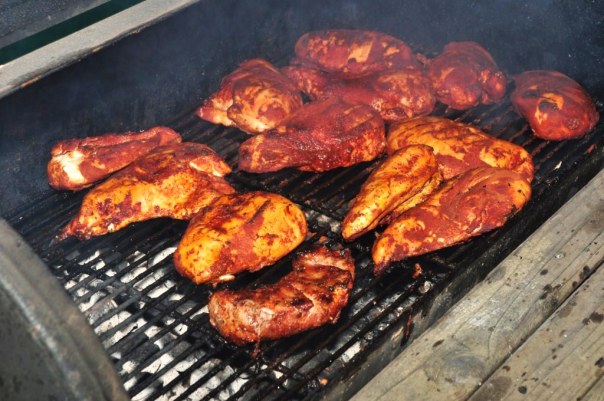 __
From our Food Goddess, TaMara:

I had a request to do some grilling and picnic recipes for the next few weeks (thanks Yutsano). We’ll traverse the table: meats, vegetables, side dishes and desserts. By July 4th we should be covered.

Tonight we’ll start with grilling chicken. I have a stockpile of marinade and grilling recipes for chicken breasts. I may be in the minority, but when it comes to many chicken dishes, including bbq and fried chicken, I prefer thighs. They have more flavor and are moister. The introduction of boneless thighs was like a culinary miracle as far as I was concerned.

When I am using marinades, though, I actually prefer boneless breasts. Similar to pork loin, they take on whatever flavors are introduced and cook up quickly. When using a marinade, I think their blandness proves more of an asset than a deficit; they are kind of like a blank canvas for introducing flavors.

And for busy weeknights, nothing is quicker and easier than pulling marinated chicken breasts out of the refrigerator, doing a quick stir-fry or grilling them and serving with rice and a salad. I have three recipes to get us started:

Cranberry Grilled Chicken (recipe here) is one of my favorites and anyone who has read this blog, knows I LOVE cranberries.

And Sunrise Chicken (recipe here) is a great citrus based marinade.

Tonight’s feature recipe is a marinade that is meant for grilling. Grilling gives the marinated breasts a nice crust. It can also be used on pork loin or boneless pork chops, though I prefer apple cider or cranberry juice to the grape juice in that case.

So what do you look forward to the most at a picnic? What’s your favorite thing to grill?

When grilling, to avoid drying chicken out, sear on each side (about 5 minutes each side), cook 5 additional minutes for each side, baste with marinade if desired, then move away from high heat for rest of the cooking time. The thickness of the chicken breasts makes a difference here, so adjust accordingly.

You’ re on your own tonight. I’ve been asked to film a drumming on Sunday and tonight is going to be a trial run. Should be fun.

END_OF_DOCUMENT_TOKEN_TO_BE_REPLACED

Perhaps to commemorate his acquittal today, words from a very bad man who is nevertheless one of those rare politicians who actually understands what is necessary to save this country:

Even better, Youtube commenters— the lowest life form in the known universe– get it right with regards to this video:

“I agree 100% accurate. He’s a phony, fraud, cheat, and criminal. But that was one hell of an of-the-cuff speech.”

“As disgusting as he was towards his wife, this message he speaks here is 1000% true”

“The people with the power are not just going to give it up. We have to take it back. We have to demand government FOR THE PEOPLE BY THE PEOPLE”

END_OF_DOCUMENT_TOKEN_TO_BE_REPLACED

Wal-Mart Stores Inc, the world’s No. 1 retailer and the biggest seller of firearms in the United States, is dropping out of a U.S. conservative advocacy group that has been a lightning rod over voting and gun laws.

Wal-Mart said late Wednesday it is suspending membership in the American Legislative Council (ALEC), which the retailer joined in 1993.

ALEC sparked controversy recently because of its involvement in voting laws and in “stand your ground” gun laws, including the one under scrutiny in the Florida killing of unarmed 17-year-old Trayvon Martin in February.

A coalition of liberal advocates targeted the group for its support of the self-defense laws.

ALEC, which serves as a forum for corporations and mostly Republican state lawmakers and lobbyists to discuss model legislation, has been criticized by liberals for promoting laws that require photo identification to vote.

My general feeling on all of this is that most businesses don’t want anything to do with groups like ALEC (KOCH and wingnut industry titans aside). Why the hell would they? They basically pay into it because there is an inherent sense of intimidation, and a fear that if they don’t there will be repercussions. What would you do if a shitload of important legislators across the country come to you with their hand out? It’s basically a legalized protection racket, but instead of whacking people and cutting them up at Satriale’s, they will be subjected to hostile legislation. So when a group like ALEC or Komen are exposed for the political lunatics they are, and it shows the slightest bit of liability to the bottom line for a company like Wal-Mart, they cut and run at the first chance.

END_OF_DOCUMENT_TOKEN_TO_BE_REPLACED

Here’s a picture of my raised bed gardens:

Just the usual stuff- heirlooms and a variety of tomatoes, as well as a bed of roma so I can freeze them for sauce, cukes, peppers, etc. The bed that appears to have nothing in it is peas and green beans and onions. I think I can squeeze two more beds in next year.

END_OF_DOCUMENT_TOKEN_TO_BE_REPLACED

Via Sullivan and John Gehring at the Faith in Public Life blog comes this link (pdf) to the weekly bulletin of the Blessed Trinity Catholic church in Cleveland, Ohio.

On page 2, Father Doug Koesel takes aim at the Vatican and its attack on the Leadership Conference of Women Religious in a column which can truly be described as righteous.

I think it’s important to highlight this, first as a counter to those who, whenever the Catholic church is so much as mentioned on here, screech that anyone who remains in the church is a criminal co-conspirator, and also because it provides a fine counterpoint to the reports that Cardinal Timmy Dolan is a bare-faced, shit-pants liar who paid pedophiles to retire and then lied through his pointy teeth about it.

However, the most important reason is because, in the current environment in the Catholic church, this is a fine example of a brave man standing up to be counted on the side of the angels and bugger the consequences.

You should go and read the whole thing, but this will give you the flavour.

This is what annoys American Catholics. The Vatican is hypocritical and duplicitous. Their belief is always that someone else needs to clean up their act; the divorced, the gays, the media, the US nuns, the Americans who were using the wrong words to pray, the seminaries, etc. It never occurs to the powers that be that the source of the problem is the structure itself. We can say that now with certainty as regards the sex abuse crisis. It was largely the structure of the church itself, the way men were trained and isolated, made loyal to the system at all costs and not to the person, that gave us the scandalous cover-up.

US nuns work side by side with the person on the street. They are involved in their everyday lives. Most cardinals spent less than five years in a parish, were never pastors, are frequently career diplomats.

Religious women in the US refuse to be controlled by abusive authority that seeks to control out of fear. They realize that Jesus taught no doctrines, but that the church, over time, developed what Jesus taught in a systematic way. Nuns have always tried to work within the system. This time their prophetic voices may take them out of the system. They may take a lot of Catholics and a lot of their hospitals, schools, colleges, orphanages, prison ministries, convents, women’s shelters, food pantries and, of course, the good will they have earned over the centuries with them.

This investigation is not about wayward US nuns. It is the last gasp for control by a dying breed, wrapped in its own self-importance. It is a struggle for the very nature of the church; who we are, how we pray, where we live, who belongs, why we believe. The early church endured a similar struggle. The old order died. The Holy Spirit won. Happy Pentecost Sunday!

I think the Vatican has bitten off more than it can chew attacking the nuns. There’s nothing scarier than a nun in a bad mood, and I imagine those rosary beads hurt like hell if they get you in the nuts.

END_OF_DOCUMENT_TOKEN_TO_BE_REPLACED

Former President Bill Clinton has decided to go to Wisconsin to campaign against Scott Walker in the final days of the battle over whether to recall the Wisconsin Governor, a move that could give a boost to the anti-Walker forces in a campaign that will depend heavily on who turns out to vote, a source familiar with Clinton’s plans confirms to me.

As late as yesterday afternoon, it was still not certain whether Clinton would go to Wisconsin. DNC chair Debbie Wasserman Schultz, in a meeting with Democrats, seemed to suggest that he was trying to determine whether he would go. But neither the DNC nor Clinton’s camp would confirm whether it was going to happen, and Democrats cautioned that Clinton had not made up his mind.

But now he will go to Wisconsin, the source confirms.

Democrats badly want Clinton to campaign in Wisconsin for Tom Barrett, and had lobbied him heavily for weeks. But Clinton remained undecided until today.

That’s…awful nice of you, Mr. The Dog.  Magnanimous, even.

Between DWS stepping it in over the weekend and Bill here finally deigning to drag himself up to the Fox River Valley for some A&W mini corndogs and a Culver’s butterburger or two, I’m convinced that the maximum amount of voter-turning-out firepower may not have have been most judiciously applied in the case of beating the Kochsuckers on Tuesday.

Still, the ramparts are finally being manned.  I just hope it’s enough.