Noted Virginia awful person and loser of political races Ken Cuccinelli doesn’t want you to end up like George Zimmerman: Don’t let shooting a person to death out of overzealous racially tinged vigilantism wipe out your savings!

Such is the raison d’être of Virginia Self Defense Law, the new firm being started by Cuccinelli and three firearms-lovin’ fellow travelers. “If you own a gun, you NEED VSDL!” the firm’s site screams. “Even lawful use of your firearm could cost you hundreds of thousands of dollars in legal fees. Protecting your own life shouldn’t cost you your life savings.”…

… “A legal retainer with Virginia Self Defense Law costs as little as $8.33 a month — less than half the cost of a hunting license,” the firm’s Web site says. “Don’t be a victim! Don’t let these realities become your family’s fiscal nightmare!”

For that price, the firm promises to defend clients facing firearms charges stemming from an act of self defense and those who have been “harassed by law enforcement for lawfully carrying their weapon.”…

State Sen. Thomas A. Garrett Jr. (R-Louisa), one of Cuccinelli’s partners in the venture, came up with the idea of offering their services by way of an inexpensive retainer. It’s a pricing strategy that has been tried in Texas, and a few outfits provide something like that on a national basis. But Cuccinelli said the national groups will find their client a lawyer — probably a low-priced one — when the need arises….

“It’s not insurance. It’s a retainer plan. But it gives you peace of mind knowing ultimately if something happens, you’ve got that coverage,” Garrett said….

From the WaPo comments so far (“Cuccinelli’s a legal innovator: he figured out how to make money by filling the ambulances up as well as chasing them down”), one would guess Mr. Cuccinelli wasn’t all that popular among the readers who know him best…

END_OF_DOCUMENT_TOKEN_TO_BE_REPLACED 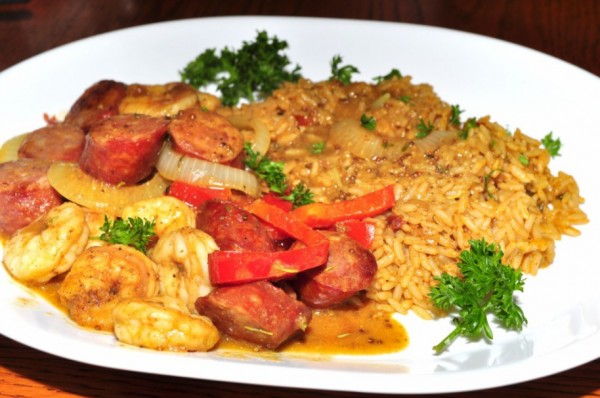 I was mulling over what to post tonight and realized Mardi Gras is coming up soon and I have a stash of recipes that would fit that theme.

A trip to New Orleans a few years ago gave me my first taste of authentic Beignets at Cafe Du Monde and Po’boys at Johnny’s. I liked the sandwiches so much, I hunted down some recipes, (click here).

I flew home in time to miss the rain, but managed to drive home in white out conditions. I am so over winter, how about you? What’s on the menu for the weekend? Any favorite Fat Tuesday recipes? Hit the comments.

The featured recipe (pictured above) is from JeffreyW tonight:

Shrimp and Andouille in a Creole Mustard Sauce

END_OF_DOCUMENT_TOKEN_TO_BE_REPLACED

You may have heard of this ridiculous pastor in Harlem that says ridiculous things. He wants to let everyone know that Obama has unleashed something upon Black men. And no, it’s not the #MyBrothersKeepers initiative…

This is real life people. I need some scotch.

END_OF_DOCUMENT_TOKEN_TO_BE_REPLACED

Apparently things are rapidly deteriorating in the Ukraine, and I have no real idea on what is going on, but there is always old faithful:

In response to reports of a Russian takeover in parts of Crimea, Arizona Senator John McCain declared Friday, “We are all Ukrainians,” before calling for swift U.S. economic aide to Ukraine, new moves to condemn Russia at the United Nations, sanctions against Russian officials and the installation of U.S. missiles in the nearby Czech Republic as a show of American regional strength.

I found this odd, because just a few years back, John McCain was telling me I was something else. Oh, look, a reporter with an actual memory:

The comments echoed McCain’s 2008 statement, “We are all Georgians,” which he made as a Republican candidate for President after Russia invaded Georgia. Six years later, McCain says he feels the same about the plight of Ukraine. “We are all Ukrainians in the respect that we have a sovereign nation that is again with international boundaries… that is again being taken in as part of Russia,” he said in an interview in his Senate office. “That is not acceptable to an America that stands up for the rights of human beings. We are Georgians. And we are Ukrainians.”

I also remember brief bits when I was an Iranian, but that was before I was Egyptian and after I was an Iraqi with a purple finger but before I became a Libyan. I think I was briefly from Yemen, too, but I’m starting to develop a bit of an identity crisis. Also, some dude once cautioned about entangling alliances:

With tensions rising in Crimea and pro-Russian forces controlling the peninsula’s main airports, Ukrainian Prime Minister Arseniy Yatsenyuk has called on Russia to “not violate the Budapest Memorandum.” So what is the “Budapest Memorandum” and what does it have to do with Crimea?

What exactly is the “Budapest Memorandum”?

The “Budapest Memorandum on Security Assurances” is a diplomatic memorandum that was signed in December 1994 by Ukraine, Russia, the United States, and the United Kingdom.

It is not a formal treaty, but rather, a diplomatic document under which signatories made promises to each other as part of the denuclearization of former Soviet republics after the dissolution of the Soviet Union.

Under the memorandum, Ukraine promised to remove all Soviet-era nuclear weapons from its territory, send them to disarmament facilities in Russia, and sign the Nuclear Nonproliferation Treaty. Ukraine kept these promises.

So, what do we know about what is going on in Ukraine, aka Obama’s newest Hurricane Katrina.

END_OF_DOCUMENT_TOKEN_TO_BE_REPLACED

If you grew up in the upper Midwest or Plains states, this was the symbol of getting the fuck out of Dodge – it’s the logo used by North Central Airlines, which later became Republic, and still later was purchased by Northwest, then Delta.  Apparently it’s officially called Herman the Duck, but we just called it the “wounded duck” because North Central’s prop flights would occasionally lose a door or make an unscheduled landing in a cornfield.

For more than forty years, I’ve flown in the same DC-9s originally purchased by North Central, into the same airports, first to leave home, and later to visit my old home from my new. I was less than 10 when I first rode in one; my daughter took her first flight as an infant. Now, as Patrick Smith reports, both the DC-9, and the larger DC-10, have flown their last flights. The DC-10 went out with a bang (bad metaphor for that plane), with special flights scheduled for aviation buffs. The DC-9 went out with a whimper on a Delta flight between Minneapolis (of course) and Atlanta, which seems fitting, since there’s really no romance in traveling on the routes served by North Central’s DC-9s. Only people who wanted to get the fuck out of Bismarck, Aberdeen, Rapid City, Sioux Falls or one of the dozens of other little burgs that were served by the wounded duck and its successors would appreciate the passing of the first jet on which most of us ever flew.

END_OF_DOCUMENT_TOKEN_TO_BE_REPLACED

For reasons that have deep intellectual roots (no, really) I spent some very loud times this week listening to live Japanese hip-hop. That left me in a position (once my hearing returned to ~70% of baseline) to react with honest curiosity when Cory Doctorow tweeted this vid:

__
Gotta say, I find the marriage of J-pop and metal to be oddly wonderful. YMMV.
__
More — the multiple layers of globalized culture visible in that vid make me want to William Gibson sitting next to me, telling me how it all came to be.*
__
Enough from me.  Propose your favorite culture/music/genre juxtapositions in the comments, or just treat this as another open thread.
__
*If you haven’t read Gibson, or not lately, do yourself a favor.  I’m rereading Zero History now, after crashing through Pattern Recognition and Spook Country over the last couple of weeks, and plan to cycle back to the Bridge trilogy pretty soon too. (Been a long time since I’ve looked at the books that put him on my map, the Sprawl trio, so I may go all the way back to Neuromancer et al. before I’m done.  In any event, if you ever need Virgil to lead you through the circles of contemporary culture, Gibson is your man.

END_OF_DOCUMENT_TOKEN_TO_BE_REPLACED

Talking Points Memo is highlighting one of the Arkansas legislaturers who wants to defund Obamacare in Arkansas by turning down free money that allows Medicaid expansion eligible people to buy policies on the Exchanges.

More than a decade ago, Arkansas Rep. Josh Miller (R) was in a catastrophic car accident that broke his neck and left him paralyzed. Medicare and Medicaid paid the $1 million bill for his hospitalization and rehabilitation.

Okay, the safety net caught him.  It worked as intended and evidently, Mr. Miller has been able to do something with his life.  This sounds like a win.

The accident that paralyzed Miller occurred about 11 years ago, the Times reported. He was driving with a friend, alcohol was involved, but Miller said he couldn’t remember who was driving. When he arrived at the hospital with his life-changing injuries, he was uninsured.

Under Obamacare in he would be required to have insurance so the safety net would not be needed to catch him when he and his buddy were young, healthy and invincible until they weren’t.  In a pre-PPACA world, Mr. Miller is uninsurable on the private market.  If he was too poor to buy a plan on the Exchange, he would qualify for Medicaid in roughly half the country.  The other half are governed by sadists.

But this week, as the Arkansas legislature has debated continuing its privatized Medicaid expansion under Obamacare, Miller has remained steadfast in his opposition…

The difference, he said, is that some of the 100,000 people who have gained coverage through Arkansas’s Medicaid expansion don’t work hard enough or just want access to the program so they can purchase and abuse prescription drugs.

“My problem is two things,” Miller said. “One, we are giving it to able-bodied folks who can work … and two, how do we pay for it?”

Okay, this makes perfect sense — Mr. Miller was the deserving poor.  Everyone else who is uninsured and either drunk driving or getting into a car with a drunk driver is a lazy shiftless moocher who probably wants to get into prescription drug fraud.

This is a great reason!