I Can’t Believe We’re Losing to These People

You are here: Home / Archives for I Can't Believe We're Losing to These People

BREAKING: Leon Cooperman, who has been battling Elizabeth Warren, says he will support fellow billionaire Mike Bloomberg for president https://t.co/gn63yXmpFF

The billionaire panic at the possible end of the long Reagan ride is really something to see.

How seriously should we take Michael Bloomberg’s potential 2020 run? https://t.co/DmmqpLs3Wo

So … about Michael Bloomberg maybe running/maybe not ? This chart is *from January* but it certainly paints a not great picture for Bloomberg … candidates matter & Democrats *aren't* clamoring for him: https://t.co/rK8WTsBsNO pic.twitter.com/20v73K3bKP

Tell all the billionaires to unite into an invincible trillionaire ultron presidential candidate and then, when they’re all together, lock the door and release the rabid badgers.

Charge Bill Gates a 1% wealth tax and then make him download wealth tax updates every time he turns on his computer. Ya know, Windows-style. https://t.co/k72RdCiP89

END_OF_DOCUMENT_TOKEN_TO_BE_REPLACED 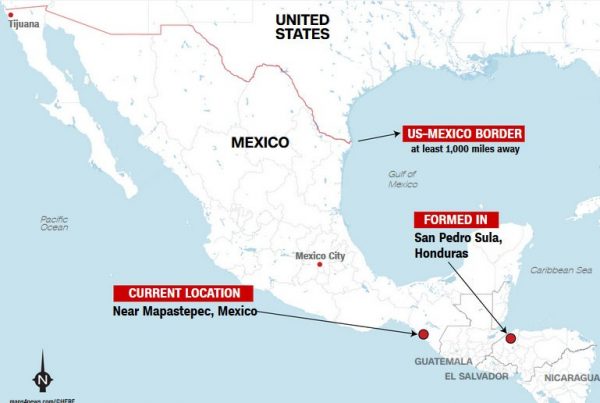 We seriously live in the stupidest of times:

Defense Secretary James Mattis is expected to sign deployment orders as soon as Thursday that could send 800 or more troops to the border with Mexico to help border patrol authorities stop a caravan of migrants from Central America moving through Mexico to enter the US, according to three administration officials.

The officials tell CNN final details are being worked out including where the troops will come from and their specific tasks.

Several administration officials say it is anticipated that the Pentagon will pay for the bulk of the mission by using active duty troops. It’s not yet clear if the Department of Homeland Security will reimburse the Pentagon.

The migrant caravan is approximately 5000 people “strong,” the vast majority of whom are either children or elderly, women, pregnant, in wheelchairs, and in various stages of poor health. They are moving at approximately 20 miles per day, which means they ARE MONTHS AWAY from being anywhere near the US border. Jesus tapdancing christ they are months away from the US embassy in fucking Mexico City. They are also unarmed and far more harmless than your garden variety tailgate of several thousand drunkards ON EVERY COLLEGE CAMPUS IN AMERICA.

To further illustrate how harmless this caravan is, it is currently not even moving, as it has been halted. Why has it been halted, you ask? BECAUSE ONE OF THEM FELL FROM AN OVERCROWDED TRUCK AND DIED.

This is not, as our idiot administration might want you to believe, the mongol horde. This is not the invasion of Normandy. This isn’t the Cuban boatlift, which we survived just fine. This isn’t even Black Friday at fucking walmart with tv’s on sale. They are no threat, they are nowhere near us, and even if, in the next six months they hobble within 50 miles of our border, we have laws and enforcement personnel a plenty to deal with them. But wait, it gets dumber:

The troops will not engage in lethal operations to stop the migrants. Instead they are expected to provide fencing, wall materials and other technical support at several key points along the border where it is believed the migrants may try to cross.

Fencing material. Say it again. Fencing materials. And not, one might presume given the general level of idiocy at play here, foils and épées. They’re acting like these guys are coming with bangalore torpedoes and obstacle breaching equipment. They aren’t in fucking siege towers.

But that’s not going to stop Team Bigoted Stupids at the White House from completely blowing a gasket and yanking a fucking batallion of poor bastards away from their training schedule, their scheduled leave, and their normal duties to post them to deal with this nonexistent threat. Speaking of which, where precisely are they going to post them? We have no idea where this caravan is going to end up on the border, AS IT IS CURRENTLY 1000 MILES AWAY IN MEXICO. Are we just going to put up a picket every 200 miles on the border with a company? You know what is also 1000 miles away? MEXICO’S BORDER WITH GUATEMALA.

In the history of political stunts, this is by far the dumbest, and will probably be the most expensive. Right now every officer in an S1-S4 nationwide is getting shitfaced hoping their unit is not tagged because trust me they do not want to deal with redoing the schedule, supply, securing transportation, housing, etc.

And this does not even NEED a military response. Jumping jesus on a pogo stick if you really want to stop a caravan of refugees that have walked for months, put up a fucking buffet table, some porta potties, and some showers. If you absolutely need a show of force take some chronically broken lemon of a Bradley off some poor CEO’s books, and have an 88 tow it to wherever these guys eventually show up if they actually show up. Put some MILES gear on it so it can go bang.

This is the dumbest most racist fucking country on the planet. I can’t even.

END_OF_DOCUMENT_TOKEN_TO_BE_REPLACED

I am not a lawyer but is this as dumb as trying to ford the Amazon during flood season with an open wound or dumber than that?

Breaking: Former Trump aide Rick Gates admits his false statement to the FBI came during a "proffer session with his counsel at [Mueller's] office."

So he LIED to them WHILE trying to cut a deal with Mueller.

(I reported that was the likely source of Count 2 earlier today…) https://t.co/n9OT8nGxzz

Lawyers — what is the dumbest thing that you can reveal without breaking confidentiality/ethics rules that a client has ever done against your advice?

END_OF_DOCUMENT_TOKEN_TO_BE_REPLACED

Axios reported yesterday that Michael Wolff taped the conversations that he used for his book:

Michael Wolff has tapes to back up quotes in his incendiary book — dozens of hours of them….

I am a relative nobody. But I know better.

I talk with the press fairly frequently. I have reporters that I talk with a lot because they are honestly striving to tell complex stories with the intent of making their readers smarter by the end of the piece. I assume that any interaction I have with any reporter is on the record and highly likely to be recorded.

On Wednesday evening, a reporter that I have talked with in the past e-mailed me to ask for some background on a long term policy issue. I said I could callback in 10 minutes. The initial chunk of the conversation was like this:

“Hi John, this is Dave from Duke, responding to your e-mail, still got time?”

“Yep, let me get my recorder going…”

“Everything on the record unless we both agree before hand?”

“Sounds good, so tell me about X and Y and how they interact?”

And then we talked for a while.

This is not hard. You assume that you are on the record and a good memorization will occur unless there is a specific guarantee that is previously agreed upon that says a conversation is either off the record, deep background, not for attribution or any other restriction including no notes/recordings. I’m a nobody who will never work in the White House and I know that.

END_OF_DOCUMENT_TOKEN_TO_BE_REPLACED

The GOP guy grabs the tie-breaking seat in the Virginia Assembly by getting his name pulled out of a bowl. 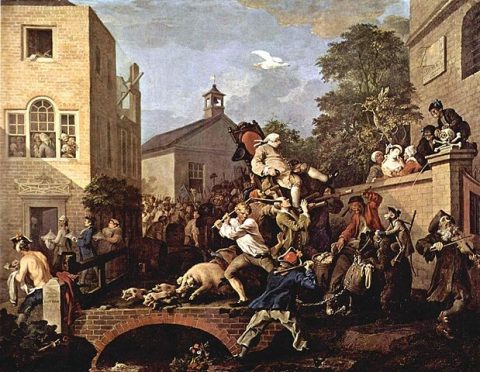 The Democrat is expected to challenge this in court, which means the seat will remain vacant for now, but because the GOP thus has a 50-49 edge, they’ll hold the speakership and all committee chairs from now till next election.

Larry Sabato puts this in context: 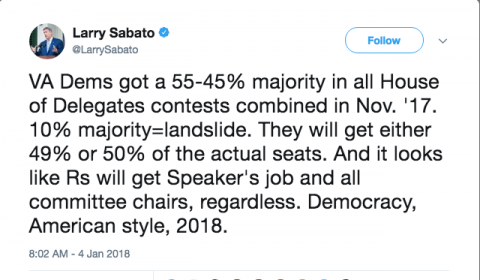 In other words: the GOP can’t win free and fair elections. So they do everything they can to ensure they never have to contest one.

They are enemies of democracy and we won’t have ours back until they are defeated, root and branch, their citadels and their walls pulled down, their fields salted and their names unspoken until not even the memory of their sins troubles our days.  Every office, every seat, at every level of government needs to be contested.

Image:  William Hogarth, Humours of an Election: Chairing the Member,  1754-55

END_OF_DOCUMENT_TOKEN_TO_BE_REPLACED

OMFG this signing statement by Trump on the sanctions bill: https://t.co/ffKSV3kmT8 pic.twitter.com/dA9NRe7y6e

Read it and bang your head into the wall until the darkness engulfs and silence descends.