END_OF_DOCUMENT_TOKEN_TO_BE_REPLACED

(Get Fuzzy via GoComics.com)
.

Satire, like the dual-blade light sabre, is a weapon best left to those with years of experience behind them. Just ask Jan Rankowski, as described by Buzzfeed‘s Joseph Bernstein:

The internet knows Jace Connors as a gun-loving YouTube personality who last month became the latest symbol of GamerGate’s escalating extremism when he released a bizarre, rambling video in which he claimed to have crashed his car while en route to the home of Brianna Wu, the game developer who has become, along with Anita Sarkeesian, the public face of GamerGate persecution.

“Jace Connors” is in fact Jan Rankowski, a 20-year-old living in Maine who is affiliated with Million Dollar Extreme, a provocative cult comedy group based in Rhode Island, and far from being the archfiend of GamerGate, Rankowski is himself now the subject of a campaign of harassment.

In an exclusive interview, Rankowski told BuzzFeed News that he intended to satirize “the over-the-top, super-hyper-macho armed GamerGater” but that harassment in recent days, as doxxing forums and GamerGate image boards have started to suspect he is behind the Connors character, has left him terrified…

After the car crash video brought a swarm of attention to the Connors character, users of obscure internet fora (4chan, 8chan, and something called Kiwi Farm), were able to trace the character to videos created by Rankowski and Sam Hyde, the comedian behind Million Dollar Extreme.

And then the phone calls started. “People have been calling my old high school calling my work,” Rankowski told BuzzFeed News, “and saying these nasty things about me. I was made to sign a contract at my job saying I wouldn’t make any of these videos again. I received a letter in the mail with a picture of me from my high school yearbook… It said I shouldn’t have fucked with 8chan.”…

Rankowski says that the situation has given him a new appreciation for the people who were most upset by his actions.

“I didn’t take this situation seriously, but I see what it means now to be in the other person’s shoes. What her life must feel like. I have this newfound respect for the people who are having to deal with GamerGate, Brianna Wu and Anita [Sarkeesian].”…

He had no idea that video was loaded, before it went off in his face! Dude, next step in the initiation is when half the internet lectures you about how what you’re experiencing isn’t actually harassment, it’s about ethics in online comedy. Also, if you didn’t want to be mobbed by starling flocks of internet idiots, why were you wandering around in that neighborhood wearing such a provocative persona, eh?

(Of course, this is when you Internet Sophisticates tell me everybody knows that ‘Jan Rankowski’ is really a cover for the next-level trolling of [insert your speculation here]…)

END_OF_DOCUMENT_TOKEN_TO_BE_REPLACED

I don’t think any of you fully appreciate how extraordinarily difficult it is to replace a desktop power supply an re-wire a pc with a cat and two puppies in your household.

END_OF_DOCUMENT_TOKEN_TO_BE_REPLACED

It’s been a bit since our last open thread.  It’s been a while since y’all have had a chance to talk smack about my psycho cat.  Herewith, two stones undone by one bird: 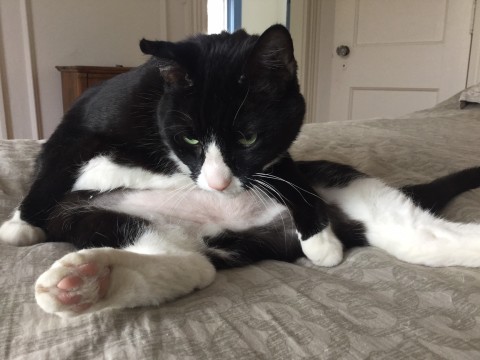 I do wonder whether Tikka’s trying to decide what evil lurks in his paw.

END_OF_DOCUMENT_TOKEN_TO_BE_REPLACED

Richard Mack, an Arizona sheriff who took a leading role in the most fringey anti-Obama law enforcement groups, made headlines with stunts like suing the President over gun control, supporting Cliven Bundy and fighting the Affordable Care Act like it’s a Cuban major general and he’s Patrick Swayze. Being self-employed and on the individual market for health insurance Mack apparently found it unpalatable to take advantage of the protections guaranteed in Obamacare. See where this is going? Of course you do. Mack’s family experienced some adverse health events in January and he had to open a crowdfunding site to head off bankruptcy. No word on whether Michael Moore will once again step in to save the day.

In all honesty, I supported the ACA precisely because I do not want anyone to suffer. Whether I agree or disagree with them, I want to make sure everyone can rant about what makes them mad without medical bankruptcy looming any time a family member breaks their leg. Maybe you think Obama is an antichrist muslim communist atheist lizard alien. No problemo. Start a club and send out a press release. But please, buy health insurance for your family.

END_OF_DOCUMENT_TOKEN_TO_BE_REPLACED

Bill O’Reilly is the sane one in the room.

Ladles and Jellyspoons, I present you with the comic stylings [via TPM] of self-made son and purveyor of a gospel that is good news only  in his fevered brain…

Put your hands together for our own, all American Franklin Graham!

“One of the problems we have in the West is that our governments, especially in Washington, has been infiltrated by Muslims who are advising the White House, who I think are part of the problem,” Graham said. “And we see this also in Western Europe. They have gotten into the halls of power.”

Oh Noes! We’re doomed until a good Christian Soldier may come to save the day!

Uhhh. Wrongo on so many axes-o, Frankie boy.  So much so, in fact, that Bill O’Reilly, veteran of so many battles fought within his own mind, could not help but do that Village media rarity, and ask a follow up:

O’Reilly pushed back, asking for Graham to name a Muslim adviser to President Obama.

“I do know that they are there. I’ve been told this by a number of people,” Graham responded. “I’m not saying that they’re sitting next to the President, whispering into his ear. But they are in the halls.”

Channelling my inner Abe:  hurts too much to laugh and I’m too big to cry.

BTW:  just to point out the obvious, being saner than Franklin Graham does not make Bill Legend In His Own Memoirs O’Reilly actually on the beam.  The question that prompted Franklin’s first reply was why the west hadn’t united to defeat ISIS — which is, as we say in the halls of reason, a question marred by assumptions not in evidence.

And with that, my fine feathered friends (and the non-avian amongst us), I give you Modern American Conservatism.

*Not that its all that easy to distinguish between those two, by Walt Kelly’s design, of course.

END_OF_DOCUMENT_TOKEN_TO_BE_REPLACED

True story: People are here to help decide who should be the most powerful leader on the planet

CPAC Day Two is behind us, and the consensus seems to be that Jeb Bush is the GOP Establishment’s Microsoft, Scott Walker is the Koch Brothers’ Apple, Rand’s faithful Paulistas are Phish heads, and everybody else is actually (a) auditioning for the VP slot, or (b) grifting. There’s lots of grifting!

NOW I understand why the Beltway political media pay such close attention to CPAC –> http://t.co/4UNnGfaV5O pic.twitter.com/dzqz96hwC7

Jeb Lund, for the Guardian:

Welcome to the Conservative Political Action Conference, a three-day-long performance from an improv troupe whose hat has only has one statement in it: you’re in terrible danger. But that doesn’t mean you’re in terrible danger right now. Right now, there are seminars. About the danger. I have been to them, as part of my quest to be America’s Most Impervious Man. I don’t even care to what…

This is like House of Cards except nobody is hot.

John Cassidy, for the New Yorker:

… After a couple of ho-hum speeches from Rick Perry and Marco Rubio, two of the would-be G.O.P. candidates in 2016, Reince Priebus, the head of the Republican National Committee, took the stage. Many CPAC partisans regard the R.N.C. as the soggy, corporate-funded enemy within (which could also serve as a shorthand description of their feelings about the Bush family), but Priebus was there to be friendly. “There will be no coronation in the Republican Party,” he assured the crowd. “If you want to win the nomination, you’re going to have to earn the nomination.” Then came Donald Trump, who appeared to have spent the flight down to D.C. doing some handicapping. “Jeb Bush—he’s in favor of Common Core,” Trump said blithely. “He’s weak on immigration. I don’t see him winning.”

Many of the attendees would dearly love to believe that Trump is right in his analysis. He was followed by one of their heroes, Senator Rand Paul, who already seems to have been running for President forever….

It is now conventional wisdom that CPAC this year has been a triumph for conservative hawks, and that, while Rand Paul is still popular in the hall, his extended moment as the lead act in that particular hootenanny finally may have passed. Folks are up there wanting to get their war on, and the laptop bombardiers in the audience are lapping it up. (This shebeen is in the market for any photo of the audience taken at that moment when Princess Dumbass of the Northwoods asked for all the veterans in the house to stand.) ISIS is coming for all of us, and most of the potential Republican candidates are waiting for it with Leadership, Authenticity, Exceptionalism, and a vast arsenal of featherweight banalities…

Speaking as an American, I would never say that.MT @SlagKogel: I'm pretty sure there's no way american politics could get any more retarded