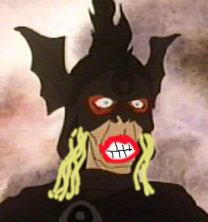 Like virtually everyone who isn’t a Nazi frog, dimwitted MAGA-mark or Bible-humping hypocrite, I’m appalled by the terrible actions the Trump regime is taking in its first week, such as dismantling the ACA (effectively murdering tens of thousands of people yearly), the anti-science gag rules and data dumps, the anti-choice hysterics that will hamstring humanitarian aid delivery, the DAPL reversal, etc.

There’s also the blatant quid pro quo and grift — donors and family members put into jobs for which they’re not remotely qualified, and sleazy, corrupt James Comey gaining job security the day after he showed up at the White House to literally receive kisses and hugs from his Godfather as well as that bloated entity’s most meaningful compliment: “He’s become more famous than me!”

But the ceaseless whining and demands for validation are somehow even more galling than watching the country morph into a conniving cocksplat’s kleptocracy of the incompetent. Mouth of Shitgibbon Kellyanne Conway was on the grievance tour, first lamenting the unfair coverage of the Trump White House to impartial millionaire media figure / Trump-tuggie specialist Sean Hannity yesterday:

Hannity spoke to Trump counsel Kellyanne Conway about the press’ “presumptive negativity” toward the Trump administration, and how they plan on countering irresponsible and reckless reporting.

“It would be nice to see people show respect for the office of the president and its current occupant,” Conway said. “Give him a chance to do right by the American people.”

She said if reporters are being “political hacks,” then the Trump team has a right to call that out.

“This White House and the media are going to share joint custody of this nation for eight years,” Conway said. “We ought to be able to figure out how to co-parent and mutually coexist.”

Two things: first, the gelatinous orange shit-stain who launched his political career with a racist, crackpot campaign to hound a sitting president about his birth certificate doesn’t get to whine about respect for the fucking office and its current occupant. They need to just stop that shit right now.

Second thing: one can rightly say many terrible things about the people of the United States, but we are most definitely not the minor children born of an unholy hate-fuck between the Trump White House and the infotainment industry. It is at once insulting, alarming and unsurprising that the Trump people see us that way. We have much to do to disabuse them of that notion.

Again, two things: First, women are half the population of this country, and Conway’s boss is the most despised new president in the history of polling, in part due to his long and extremely well-documented history of being a slimy sexist creep. So “due time” is right fucking now.

Second, the annual fetus fetishists’ Parade of the Busybodies will be microscopic compared to the Women’s March — hell, even Trump’s pathetic inauguration crowd will exceed it. The coverage won’t be as extensive, but it will definitely be more than the event warrants.

To echo Kay in the morning thread, these people really need to get over their neediness and go about the business of running the country into the ground without the constant whining.

Just last night, Trump lied to a congressional delegation about losing the popular vote because of millions of “illegals” flooded the polls. Why can’t that repugnant orange snowflake accept that he lost the popular vote and move the fuck on already?

I could bear watching these venal, grasping assholes ruin the country if they’d just stop demanding my respect and love. They haven’t earned it. They don’t have it. They never will have it. They should just shut the fuck up about it. It’s pathological.