One of my hens laid a freakishly large egg. Here it is in an egg carton next to an unusually small egg and a normal-sized one: 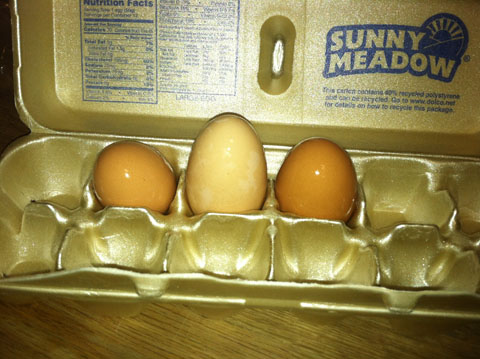 It’s so big the carton lid wouldn’t close. But in case that doesn’t give you an idea of the scale, here it is on a standard-sized potholder: 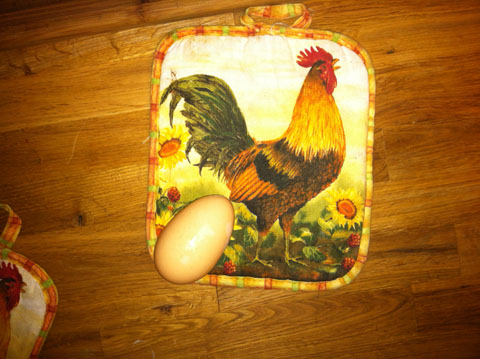 It was a double-yoked egg. I cooked it for my husband a short while ago, and he reported that it was delicious.

I didn’t have breakfast because I’m off the the Gasparilla Pirate Fest soon. It’s a big, drunken melee involving local grandees dressed up like Long John Silver and thousands of amateur skippers who will hilariously knock their boats into other vessels, seawalls, etc., in a pointless quest for a $0.10 string of beads. What are y’all up to today?

END_OF_DOCUMENT_TOKEN_TO_BE_REPLACED

Here’s Joan Jett, the boss hen (and my pal Ravenclaw the Red, who appears to be popping out of JJ’s breast, “Alien”-style): 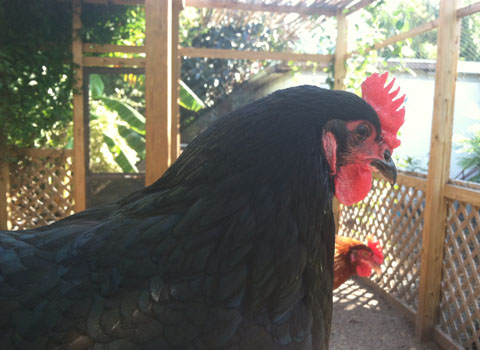 JJ is nice to humans, but she’s pretty mean to her fellow fowl. I mentioned her bullying ways once before, and some of you gently admonished me, saying that JJ was being firm, not a bully. Well, maybe. All I know is I’m glad I don’t have a red comb or neck dooley-bobs for her to pull!

END_OF_DOCUMENT_TOKEN_TO_BE_REPLACED 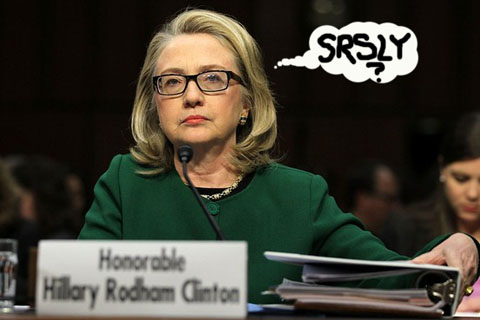 Secretary of State Clinton tangled with the preening Republican arseholes in the Senate this morning and is right now confronting the unhinged yahoos in the House. I thought she was terrific this morning, from what I saw.

However, I think Steve M at No More Mr. Nice Blog has it right when he notes that, while we lefties perceived Madam Secretary deftly catching her interrogators’ self-serving slings and arrows and hurling them squarely back at her inquisitors’ junk, the right isn’t watching the same show. In response to Senator Johnson’s obsession with Ambassador Rice’s Sunday morning talk show talking points, Secretary Clinton said:

“With all due respect, the fact is we had four dead Americans,” she said. “Was it because of a protest, or was it because of guys out for a walk one night who decided they’d go kill some Americans? What difference, at this point, does it make? It’s our job to figure out what happened and do everything we can to prevent it from ever happening again, senator. Now, honestly, I will do my best to answer your questions about this. The fact is that people were trying, in real time, to get to the best information.”

Steve observes that the wingnuts have already pounced on the quote: “What difference does it make?” and notes:

They have what they want: a soundbite they can rip from context and use as a cudgel to beat the administration and Secretary Clinton with. I’m not sure if they really expect their efforts to color mainstream coverage of this story, but it’s clear that that’s what they’re hoping. They have a new “you didn’t build that,” a new “spread the wealth around,” and they’re going to wring everything they can out of it.

He’s right, I’m sure. But I’m betting they’ll meet with similar levels of success with their latest chew-toy. Which is to say, zero outside the wingnut echo chamber. Please proceed, Governor.

END_OF_DOCUMENT_TOKEN_TO_BE_REPLACED

Yeah, I know it’s Tuesday, but I was watching the Patriots get clobbered Sunday night and only just got around to watching the latest “Downton Abbey” episode. I’m not sure why I like this show so much, but I think part of the appeal is the furry bum of Sir Robert’s yellow lab in the opening sequence: 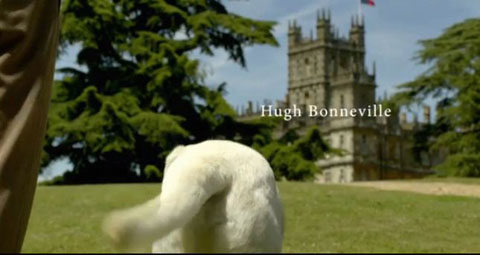 Thanks to some jackass in one of John’s earlier “Downton Abbey” threads, I know way more about the fate of some of the main characters than I would like (kindly feast on a bag of kipper-flavored dicks, spoilers!). But the program is still compelling, even if it is merely a soap opera with better production values, above-average acting and interesting period costumes.

I doubt writer / executive producer Julian Fellowes reads Balloon Juice, but just in case, here are some ideas: Lady Edith should run off with the tall ginger footman and found a publishing empire. Mrs. Hughes needs to sneak into Carson’s quarters and make him a Cheerful Charlie. Anna should send Bates a cake with a goddamned file in it already. O’Brien and Thomas the Valet should grapple on the tallest Downton spire and fling one another off simultaneously.

Lady Mary and Matthew should hiss recriminations at one another until both are transformed into gooey puddles of self-righteousness and self-regard. Tom and Lady Sybil should return to Dublin, open a pub and become patrons to James Joyce.

Sir Robert and Lady Cora should accidentally get locked in the wine cellar, consume massive amounts of port and hurl drunken, scathing “Who’s Afraid of Virginia Woolf”-style verbal abuse at each other. The Dowager Countess should not change a bit.

Please consider this an open thread.

END_OF_DOCUMENT_TOKEN_TO_BE_REPLACED

[Via] Yesterday was no doubt profoundly depressing for the Fox & Friends audience: 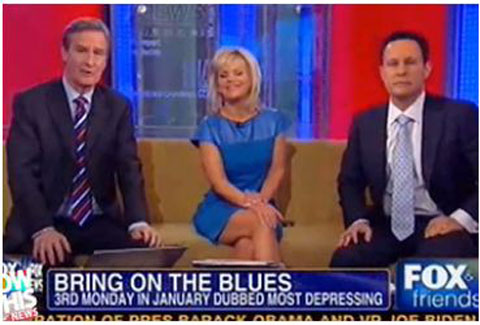 But this business of the third Monday in January being the most depressing day of the year in general — even for people who weren’t hoping to see the Romneys’ dancing horse featured at the inaugural balls — is apparently utter crap.

END_OF_DOCUMENT_TOKEN_TO_BE_REPLACED

We’re moments away from the Niners vs. Falcons for the NFC title. A “meh” on both their houses, but I’ll be marginally rooting for the Falcons. I guess.

Next, the Patriots vs. Ravens at 6:30 PM ET for the AFC championship. Can’t abide either team, but I suppose I have somewhat less disdain for the Patsies than I do for the Dirty Birds.

I think this is the least interested I’ve been in the playoff and Super Bowl match-ups since I was in diapers. On the other hand, I’m marinating a Boston butt in mojo to grill and then shred for carnitas. Mmmm!

Who are you rooting for and why? Why not? Whatcha cooking?

END_OF_DOCUMENT_TOKEN_TO_BE_REPLACED

Wireless carriers are blood-sucking leeches run by amoral pricks whose unfathomable greed and utter disregard for fair dealing would make Bernie Madoff ashamed enough to seek species reassignment surgery. My husband and I recently fell prey to a scam perpetrated by our long-term mobile, landline, TV and Internet provider, Verizon.

We innocently strolled into a local Verizon retail outlet a few months ago to see about upgrading my husband’s old clamshell-style crap-phone so he could stop writing notes on paper, photographing them and sending that in lieu of text messages. A more credulous pair of bumpkins has never been so effectively swindled by such a brazen pack of bald-faced liars.

The fecking feckers sold us a packet of magic beans: a bundle that would supposedly result in a lower overall monthly payment for all services while upgrading hubby’s crap-phone to a smartphone, expanding our channel line-up and improving the quality of our landline service. (That last part smarts especially in retrospect since we had intended to get rid of the landline, which we rarely use.)

But no, the lying Verizon motherfuckers told us: With THESE special beans, the landline is BETTER than free! It exudes a magickal “savings dust” that reduces your overall bill, each and every month! Plus, the new and improved landline service comes with a snazzy new transmitter base with periwinkle-colored ambient lighting and can even serve as a marital aid / can opener / wine decanter!

We idiotically signed on, and when the incomprehensibly Byzantine combined bills began to arrive, we found that — quelle surprise! — the deal was not as advertised! When I called to investigate, I was eventually made to understand that through a combination of “line access” charges, service fees, etc., our bill was going to be around $30 more a month than it had been.

Moreover, I was given to understand that not only had we extended my husband’s phone contract by two years (which we knew), we were now locked into two-year contracts for the landline, TV and Internet service too, all of which had previously been at-will. The bottom line is, if we want to dump Verizon right now, it’ll cost us nearly $800.

I’ve raised holy hell across the Verizon customer service spectrum, calling, chatting, emailing and even snail-mailing the bastards to request that they kindly remove their dicks from our ass. To no avail.

But you know what? I can get through this. I endured the two-term governorship of Jeb Bush and the presidency of George W. Bush, and dog willing, I will outlast the vile governorship of Rick Scott, so I know a little something about waiting out evil fucks. I’ll wait out Verizon too, and once I’m shut of them, I’m hoping to arrange it so that they never see another nickel from the Cracker household. Ever. That’s the only kind thing about time: Eventually, this too shall pass.

My question is, of all the hucksterish-prick wireless carriers out there, which one have y’all found to be the least rapacious? Also too, is there such a thing as satellite TV and Internet service? And lastly, please consider this an open thread / wireless carrier primal scream therapy center.