MCCAIN says he supports Graham Cassidy healthcare bill. Would vote for it

Graham-Cassidy would shift money from states that have successfully implemented the ACA to non-expansion states and then ratchet down the block grants.

Time to call the Senate again.

We need to run out the clock to 12:01 October 1, 2017 at which point the healthcare reconciliation instructions expire. Encourage Senate Democrats to submit bills to the CBO for scoring so that they are back-logged and can not rapidly score anything that needs to be scored for reconciliation. Call and encourage the Sanders budget team to go to town with the Parliamentarian. 24 days need to be burned.

END_OF_DOCUMENT_TOKEN_TO_BE_REPLACED

If you want to repeal Obamacare with FY17 reconciliation, you better do it soon:
*PARLIAMENTARIAN RULES ACA REPEAL MECHANISM EXPIRES SEPT 30

The dramatic vote at 2:20 AM where all forty eight Democrats and three Republican Senators voted against Skinny Repeal did not kill the bill. It merely killed an amendment in the form of a substitute to the underlying reconciliation compatible repeal measure. Senator Majority Leader McConnell then pulled the vehicle from consideration at that time. He reserved the right to put it back on the calendar.

The big question remained as to when the reconciliation vehicle dies. It will die if it is not passed in the fiscal year for the budget it was created from. That means it is only a viable vehicle until midnight on September 30, 2017. Once must-pass bills are taken care of (CHIP, Harvey, flood insurance, debt limit, FY-18 funding) Democrats must insist on either immediate adjournment until 12:01 AM October 1st or promise to filibuster everything including post office renaming bills to run out the clock.

Once FY-18 begins, the reconciliation instructions need to be written again and it basically forces a choice between tax cuts or the repeal buzz saw for Republicans.

END_OF_DOCUMENT_TOKEN_TO_BE_REPLACED

This is an amazing ad. Tough to watch, but important in terms of the issues it raises. It’s by Randy Bryce, who is running against Paul Ryan.

I’m trying to stay away from the catnip of raising money for marquee races, but fuck, this guy’s running against Paul Ryan and he’s put together one hell of an ad. I think he deserves some money. 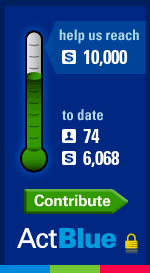 END_OF_DOCUMENT_TOKEN_TO_BE_REPLACED

California is studying a single payer system. It is doing the homework to make explicit the assumptions that are needed to make the system work. Modern Healthcare has some details:

SB562 would guarantee health coverage with no out-of-pocket costs for all California residents, including people living in the country illegally. The state would contract with hospitals, doctors and other healthcare providers and pay the bills for all residents similar to the way the federal government covers seniors through Medicare.

The measure envisions using all public money spent on healthcare — from Medicare, Medicaid, federal public health funds and “Obamacare” subsidies. That’s enough to cover about half of the $400 billion cost, according to the legislative analysis.

The rest would come from higher taxes on businesses, residents or both. It would take a 15% payroll tax to raise enough money, the analysis said.

Matt Bruenig makes one very good point before I want to look at some details:

After the implementation of single payer, the report says, health expenditures in the state of California would total $400 billion per year, or 15 percent of the state’s GDP. This is 3 percentage points lower than the share of GDP the US overall spends on health care.

I have a couple of questions about the finances.

Does the analysis assume or not assume the AHCA will be passed? If it does not assume the AHCA, there is a potential $10 billion Medicaid annual gap in the financing. More importantly it is assuming some incredibly complex and currently not authorized in law much less by rule making waivers.

What happens when there is a recession? California has a balance budget constraint. Wage and capital gains income taxes tend to be pro-cyclical. They go up in good times and crash in bad times. How is this program financed in bad years?

Finally, we need to look at the distributional fight inherent within universal access programs. Single payer is exceptional for the fifty two year old making $11 an hour with either no benefits or Bronze level benefits. It is not as good of a deal for a twenty nine year old independent contractor making $39,000 a year who has a cheap policy in the individual market. It is a really bad deal for the mid-40s couple making $200,000 with exceptional coverage through work.

The American political system is most responsive to people who have a lot to lose, people who have power and people who can mobilize significant resources. In this case, that is an apt set of descriptors for the mid-40s couple making very good money.

Single payer is hard. California is trying to make explicit the trade-offs needed to get a single payer system off the ground. There are choices to be made with winners and losers from each choice made. And each set of people whose current situation is changed for the worse will scream.

Update 1 And oh yeah, how does this play nicely with ERISA, the controlling law on most employer sponsored benefits including health insurance?

END_OF_DOCUMENT_TOKEN_TO_BE_REPLACED

I want to look at one element of the CBO score. It is the offered actuarial value of plans. Under the House Bill, out of pocket maximums would be fixed but there would be no age banding. The CBO sees this having an interestingly low effect.

Beginning in 2020, the legislation would repeal those requirements, potentially allowing plans to have an actuarial value below 60 percent. However, plans would still be required to cover 10 categories of health benefits that are defined as “essential” under current law, and the total annual out-of-pocket costs for an enrollee would remain capped. In CBO and JCT’s estimation, complying with those two requirements would significantly limit the ability of insurers to design plans with an actuarial value much below 60 percent.

Mechanically, under the House bill without a follow-on phase 2 or phase 3 bill, insurers can probably design plans that have at least 55% actuarial value (AV) coverage as the minimum level of coverage. Bronze right now is 60% +/-2 points of AV.

It will be very hard for people to buy a non-Bronze plan because insurers won’t offer them except at exorbirant prices. Let’s work through my logic.

Insurers are currently required to offer at least one Silver and one Gold plan if they want to sell on Exchange. Those plans are age rated at 3:1 with subsidies absorbing almost all of the local price increase risk for the Silver plan. Under the AHCA, those requirements are not in place and the subsidy is not tied to local pricing. Young buyers who are healthy will either opt out or buy the lowest actuarial value coverage possible because it will cost them very little.

Insurers then have to look at the people who actually need coverage and cost money to cover. They’ll offer a Bronze plan to get the young people in. But if they see a 58 year old asking for a Silver or Gold plan, they know that this person is going to be hyper expensive to cover as they have just self-identified as being high risk and high expense. Insurers won’t offer actuarial value levels above the minimum requirements because they will lose money on those policies.

END_OF_DOCUMENT_TOKEN_TO_BE_REPLACED

The First Congressional District in Virginia is represented by a long standing Republican, Rob Wittman. He easily won re-election in 2016 by twenty three points and Trump carried the district by 13 points. This is a district where the traditional threat to a Republican Representative is from their right flank.

Keep that in mind as we look below:

.@RobWittman (R-Va.) says health care bill will not "do what is necessary for the short and long-term best interests of Virginians…"

This is good news for people who don’t want to throw twenty four million people off of their insurance in order to give a tax cut to people who don’t need one. Speaker Ryan has at most twenty three (currently he has 21 spare votes due to vacancies)) votes that he can afford to lose while still getting to 218. He has 23 Republicans who won in 2016 despite representing seats carried by Hillary Clinton. These are the first seats that fall in a Democratic wave if the Democratic base is pissed off. Their behavioral pattern will look a lot like Blue Dog Democrats in 2009-2010. Anything that passes the House needs could afford to have those twenty three most vulnerable Republicans defect by either voting no or finding a way to be outside of DC to not vote. At most one or two of these Representives would have to take a very hard vote that would probably cost them their seat. That is a vote that many Blue Dogs and New Dems took in 2010 and it cost them their seat.

The issue is if people like Rep. Wittman defect. A single defection can be replaced by another hard vote. But if there are a half dozen or a dozen defections from relatively safe Republican districts, then the willingness of marginal Republicans to take one for the team will decline dramatically as they will be looking out for themselves. It would be as if both Representatives from Philadelphia decided that they would not vote for the ACA and thus forcing a pair of Blue Dogs to take the hard vote.

We already know that AHCA was under threat of defections from both vulnerable Republicans and ideological maximalist Republicans. Now if mostly safe Republicans are bailing, there is great difficulty in Speaker Ryan assembling a coalition in the House. Which then leads to the following:

Sen Mike Lee on Mark Levin show predicts the Ryan plan will fail in Senate, probably in House too

So our mission tomorrow is to call Congress. Demand that your Rep or your Senator will not cut Medicaid nor screw over the 50-64 year olds.

END_OF_DOCUMENT_TOKEN_TO_BE_REPLACED

This is great news:

Buoyed by a wave of progressive activism that began after the election of President Trump, Virginia Democrats plan to challenge 45 GOP incumbents in the deep-red House of Delegates this November, including 17 lawmakers whose districts voted for Democrat Hillary Clinton.

Is anyone going to the Not My President’s Day rally today?

My wife and I wrote post-cards to our Senators and Reps telling them to investigate Trump’s ties to Russia.