Trick-or-treaters and Halloween fans can breathe a little easier this year with coronavirus cases around the U.S. generally on the decline. A new poll finds that Halloween participation is rebounding, but still short of pre-pandemic levels. https://t.co/xzsXZk88ls

END_OF_DOCUMENT_TOKEN_TO_BE_REPLACED

I don’t think any of this is coincidental https://t.co/hS1Jt8nD8l

It would be more of a firestorm if a private citizen could claim executive privilege when the executive declines to. https://t.co/HLlvCYmQKP

— Fred Will Not Subscribe To Your Newsletter (@LesserFrederick) October 27, 2021

I like Bess Levin’s explanation at Vanity Fair — “Joe Biden Reminds Trump He’s a Has-Been Who Lost the Election”:

Cue Trump screaming in a pitch only dogs can hear.

During the four anni horribiles that Donald Trump was in office, he and his lawyers regularly tried to hide behind the office of the presidency when it came to legal issues…[H]is personal attorneys made the bold claim that it was unconstitutional for presidents to be investigated for any crimes whatsoever while in office, including shooting a person on Fifth Avenue.

Now, of course, Trump is not president. Yet he still seems to believe the powers and the privileges of being president should apply to him, an assumption that the actual president has now, on two separate occasions, been forced to explain is about as laughable as the idea of Ivanka Trump being qualified to run the World Bank…

After the White House refused to keep secret the initial batch of documents requested by the House committee, press secretary Jen Psaki explained that Biden had “determined that an assertion of executive privilege is not warranted for the first set of documents from the Trump White House that have been provided to us by the National Archives,” adding that the West Wing would “evaluate questions of privilege on a case-by-case basis, but the president has also been clear that he believes it to be of the utmost importance for both Congress and the American people to have a complete understanding of the events of that day to prevent them from happening again.”…

Somehow the party that seats Lauren Boebert in Congress is not the party that is constantly on trial for offending the values of normal decent Americans.

Democratic message: We would like to spend goverment money to help you

Republican message: We are right now coughing live virus in your face, also we will kill anyone who tries to count your votes next election

THE PROBLEM IS THE DEMOCRATS ARE TOO RIGID IN THEIR MESSAGING

yes, they’re members of an extremist party, headed by an extremist. the fiction of moderate republicans is what american conservatives tell each other to sleep at night. https://t.co/7tPJOssByA

END_OF_DOCUMENT_TOKEN_TO_BE_REPLACED

how about y'all try this one on for size. https://t.co/eS4PRpKKFF pic.twitter.com/yGAfuamfGf

Amanda Hess, ‘Critic’s Notebook’, because hating on other women is always a meal ticket:

… Before the sign was everywhere, it was outside the home of Kristin Garvey, a librarian in Wisconsin. In what she has called a postelection “fog,” Garvey took a Sharpie to poster board, scrawled a range of social-justice slogans into that now-ubiquitous list and planted it in her yard. Soon a photograph of the sign hit Facebook and went viral. With the help of a redesign from a professional artist (who rendered its words in rainbow letters on a black background) and a boost from Pantsuit Nation (the online hive of Hillary Clinton supporters), its message became a mantra among liberals who felt lost in Trump’s America…

Buying the official “In This House” sign, at least, directly benefits a specific cause. The license for the design has been gifted to a small Wisconsin reproductive health nonprofit, which collects proceeds from sales through online retailers like Zazzle and CafePress. Beyond this transactional relationship, the sign’s message drives to a perplexingly apolitical conclusion. With its exhaustive list of allied issues, it resembles a multipurpose kitchen gadget — it can chop, it can dice, but often it sits in the drawer unused. Listing all the social-justice slogans together nods to a careful effort at inclusivity, but it also diffuses the sign owner’s perceived responsibility to engage in any particular movement. The kicker, “Kindness Is Everything,” assures the owner that the real key to change lies within. The important thing is that a person be the kind of person who would display the sign.

This is the epitome of virtue signaling: an actual sign enumerating the owner’s virtues. There is something refreshing, actually, about the straightforwardness of that. Whenever I spy one in a window or on a lawn, I feel mildly annoyed and begrudgingly impressed…

if more normal people with normal views had columns in the new york times instead of a collection of narcissists, sociopaths and vapid assholes, maybe they wouldn't have to put up their yard signs to see their views in print.

it's the stupid, meaningless sign generator gimmick at the top of this article that ended up being the red cape waving at me

END_OF_DOCUMENT_TOKEN_TO_BE_REPLACED

All you have to do is send an email to start the process.   That’s it.  Just one email message, telling us that you want your guys in the calendar and what their names are.  You don’t even have to send the photos yet.

Address the email to me or you can send it to pet-calendar.

Your message should include:

When I get your email, I will send you instructions and the link to upload your photos.

As you can see, Lucky – who owns lashonharangue – is intently waiting for your information to arrive 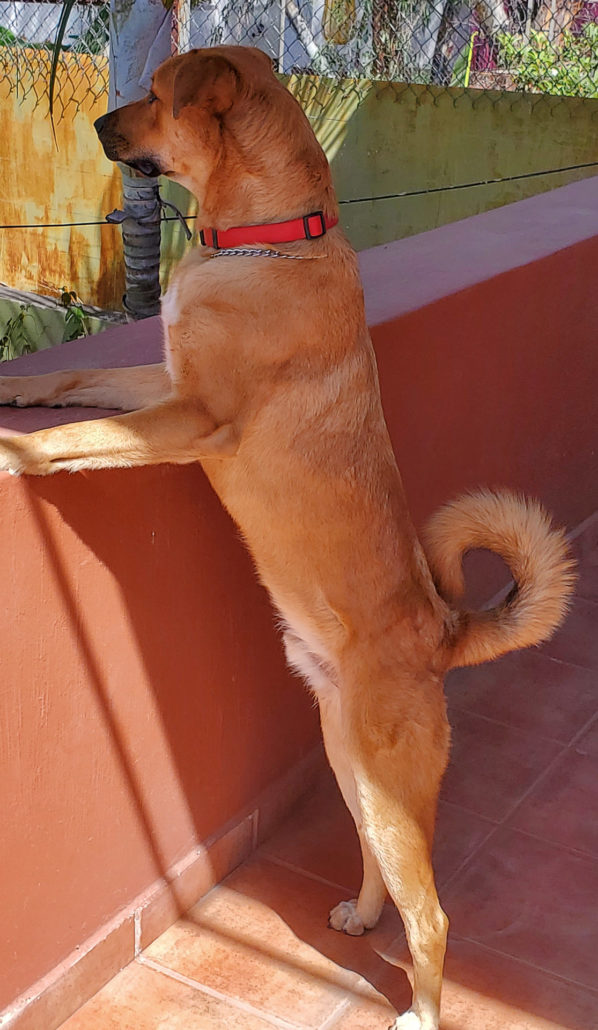 END_OF_DOCUMENT_TOKEN_TO_BE_REPLACED

I’m so ashamed of my alma mater right now that I was almost tempted to say “Go Dawgs,” which is heresy on today of all days. (Stifle yourself, Raven! :) From The Post:

The University of Florida barred three faculty members from testifying for plaintiffs in a lawsuit challenging a voting-restrictions law enthusiastically embraced by Gov. Ron DeSantis (R), which activists say makes it harder for racial minorities to vote. The university’s action raises sharp concerns about academic freedom and free speech in the state.

The public university said the three faculty members — political scientists Daniel A. Smith, Michael McDonald and Sharon Wright Austin — could pose “a conflict of interest to the executive branch” and harm the school’s interests if they testified against the law signed by DeSantis in May.

“As UF is a state actor, litigation against the state is adverse to UF’s interests,” school officials said, according to documents reviewed by The Washington Post.

You know what’s “adverse to UF’s interests”? Denying professors their First Amendment rights. I’m no academic, but I suspect schools that silence professors and suck up to authoritarians tend to incur reputational damage. Maybe even to the extent that it interferes with much ballyhooed rankings.

This isn’t the first time the spineless administration and corrupt board have knuckled under to DeSantis’s authoritarian tactics and engineered rewards for his cronies.

Fortunately, the professors who are being denied their fundamental rights aren’t just rolling over and screaming “please don’t defund me, bro” like UF President Kent Fuchs does:

"The academics will file a legal challenge against the university if it does not change its stance, said Paul Donnelly, an attorney representing Smith, McDonald, and Austin."

This latest outrage further demonstrates how dangerous DeSantis is and why those of us in Florida need to go all in on defeating him next year, not only to save our state but also to protect America. This week, wingnut media outlets rolled out a coordinated campaign to assert once again that DeSantis “won” the pandemic, never mind the 60K dead.

Wingnut media figures see this sociopath as a housetrained Trump, and they’ll work tirelessly to impose him on the nation if we’re not vigilant. We better be because DeSantis would be worse than Trump.

END_OF_DOCUMENT_TOKEN_TO_BE_REPLACED

I knew what the ‘Satchel Paige story’ was gonna be, even before finding the clip:


These are two old guys who have risen to positions nobody ever expected from them — and who are now doing good things that have surprised their supporters almost as much as their enemies. I for one am glad they’re enjoying themselves!

Elsewhere: The horror, the horror!…

Wages and salaries jumped in the three-month period ending in September by the most on records that date back twenty years, increasing 1.5%. Many companies have been forced to offer higher pay to fill a near-record number of available jobs. https://t.co/yFhgTz9pjA

It's how he repealed the ACA. https://t.co/9GrFwewr7b

So every effort that looks like a failure — like yesterday (!) — is just another demonstration to outline the bounds for a future agreement. Those “failures” are how the lines get drawn and they’re necessary. No one can cave without a painful fight first.

The BBB/BIF negotiations aren't unusually messy, it's just the first major spending bill of the age of hyper-engagement, the age when people get outraged about who Democrats put in charge of bringing the bagels to the weekly meetings.

ETA: Sorry these latest posts are running late — I’ve been fighting a mild bout of the spindizzies (labyrinthitis) all week, and reading even slower than usual.

END_OF_DOCUMENT_TOKEN_TO_BE_REPLACED

BREAKING: The FDA has authorized kid-size doses of Pfizer's COVID-19 vaccine for children ages 5 to 11. American children could be eligible for vaccines as early as next week. https://t.co/R6mDpxPx46