You are here: Home / Foreign Affairs / War For Ukraine Day 134: Russia Tries To Press Its Advantage in the East, Ukraine Continues To Counterattack in Kherson 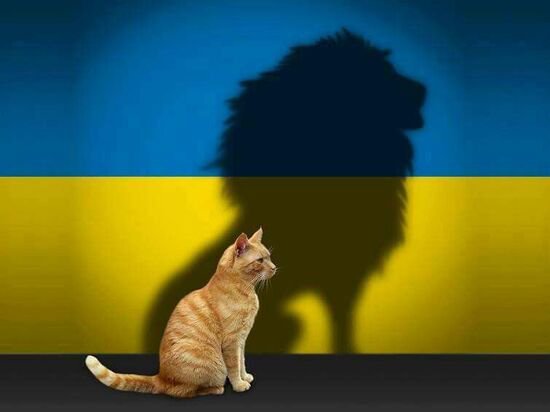 Here’s tonight’s address by President Zelenksyy. Video below, English transcript after the jump (emphasis mine):

Today, the main topic in our country has become the British topic – Boris Johnson’s decision to resign as party leader and Prime Minister. In the afternoon I spoke with him and thanked for the support we have received since the first day of Russian terror.

First of all, these are weapons: Stinger air defense systems, cool NLAW anti-tank systems, artillery, ammunition, armored vehicles and many, many other things. Substantial political support, strong sanctions against Russia, financial assistance to our state – more than two billion pounds have been allocated for security and defense needs alone since February 24.

Britain’s role in protecting freedom is truly global. And although this is a reflection of the position of British society, the leadership and charisma of the state leader are always of special importance. Especially at such a time – the time of Russia’s full-scale anti-European war, which started its attack on Europe precisely from our state. So it is not surprising that Ukrainians feel personal gratitude to Boris.

But let’s not forget that we are building relations between states. Great Britain’s support for Ukraine should not change, no matter what happens in London’s power circles, both Boris and all our friends in the United Kingdom assured me of this.

I met today in Kyiv with representatives of the US Congress – Senators Lindsey Graham and Richard Blumenthal. They represent both parties, Republican and Democratic, and both support Ukraine very fundamentally. They were the authors of the resolution calling on the Department of State to recognize Russia as a state – sponsor of terrorism. I thanked them for this activity and hope that it will be brought to fruition.

I informed the senators about the situation on the frontline, about what the occupiers are preparing for. In particular, we talked about Donbas, the south of our country, the Kharkiv region. Today, the Russian army hit Kramatorsk again – again with missiles. The occupiers also hit Kharkiv, the cities of Donbas…

In each direction, our partners have accurate information about our defense needs. This concerns air defense, modern MLRS. The greater the defense aid to Ukraine is now, the sooner the war will end with our victory and the smaller will be the losses of all countries of the world, the losses of the United States from Russian pressure on democratic societies.

Tomorrow I will continue the series of appeals to the European parliaments – it is Slovenia’s turn. Tomorrow there will also be a lot of internal Ukrainian news – a very meaningful day is ahead.

After the conference in Lugano, which was dedicated to the recovery of Ukraine, government officials have already agreed on emergency aid to our country in the amount of more than $2 billion – these funds will be directed to strengthening the budget and preparing for winter. By the way, export of Ukrainian electricity to EU countries, which has already started, is a significant support both now and during the heating season. The price of electricity on the European market is higher than in Ukraine, and this will enable energy companies to use the earned funds to provide services for Ukrainian consumers. Moreover, with unchanged tariffs.

Also, government officials are actively working on the logistics of agricultural exports. I heard the reports from the Minister of Infrastructure and the Minister of Agrarian Policy on this topic today. We will do everything to maintain access to the world market despite the Russian blockade of our ports.

And, of course, today I want to express gratitude for the final stage of the struggle for Zmiinyi – our national flag was hoisted there. This operation lasted two months. Intelligence, Special Operations Forces, “Alpha” unit of the Security Service, border guards, gunners, Navy, Air Force. And now let every Russian captain – whether of a ship or an aircraft – see the Ukrainian flag on Zmiinyi and know that our state cannot be broken.

I am grateful to everyone who defends Ukraine!

Zmiinyi is Snake Island. The Naval News Service has the reporting on this Ukrainian operation:

The sight of the Ukrainian flag flying over Snake Island, just days after the Russians retreated from it, is hugely symbolic. Placing the flag was expected, and naturally it made headlines. But the mission behind it was less clear.

The divers covertly surveyed the coastal zone, looking for anti-submarine and anti-landing mines. After establishing a safe passage, they gave the signal to the boats of the main group.

The 73rd Naval Special Purpose Center is the special forces unit of the Naval Infantry (marines). Often referred to as Spetsnaz, they are broadly equivalent of the U.S. Navy SEALs or British SBS.

Details of the underwater vehicles employed has not been reported. The unit is known to operate certain sophisticated Western types. But like many special forces units their inventory is shrouded in secrecy.

The SOF (special operations forces) operators were not alone. Combat engineers of the 59th Separate Motorized Infantry Brigade, and navy personnel from the 801st Separate Detachment also landed. The engineers were the first to land on the island, to deal with any mines or booby traps. They cleared a passage for the rest of the force.

As well as planting several Ukrainian flags, the small force gathered intelligence on the Russian equipment there. The island has been hit repeatedly by both sides, but some equipment remains.

Ukrainian sources report that Russian warships begun approaching the island while the troops were still there. Having completed their mission, the Ukrainian force withdrew. Then the Russian side launched a missile attack on the island, reportedly hitting the pier. It is possible that they were intending to destroy equipment to prevent it falling into Ukrainian hands.

Russia claims that it hit and killed some of the Ukrainian forces. The Ukrainian side says that its force returned to base unscathed.

There was no operational update posted today by Ukraine’s MOD.

Here is the British MOD’s daily assessment from earlier today: 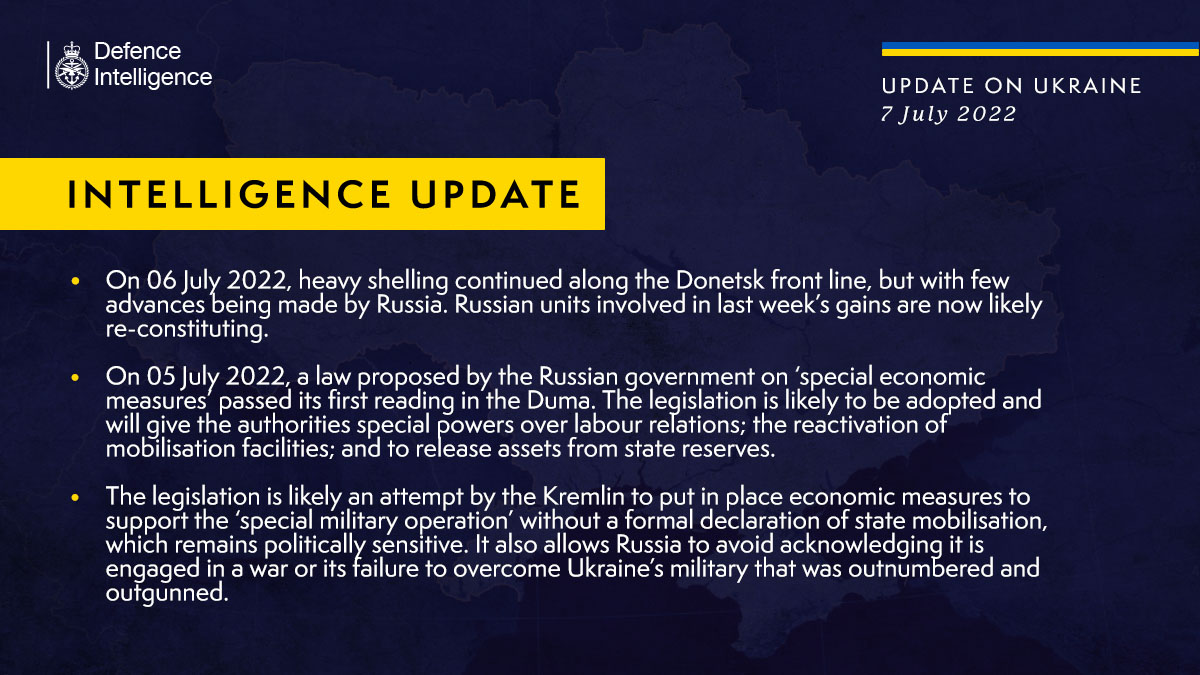 And here’s their updated map: 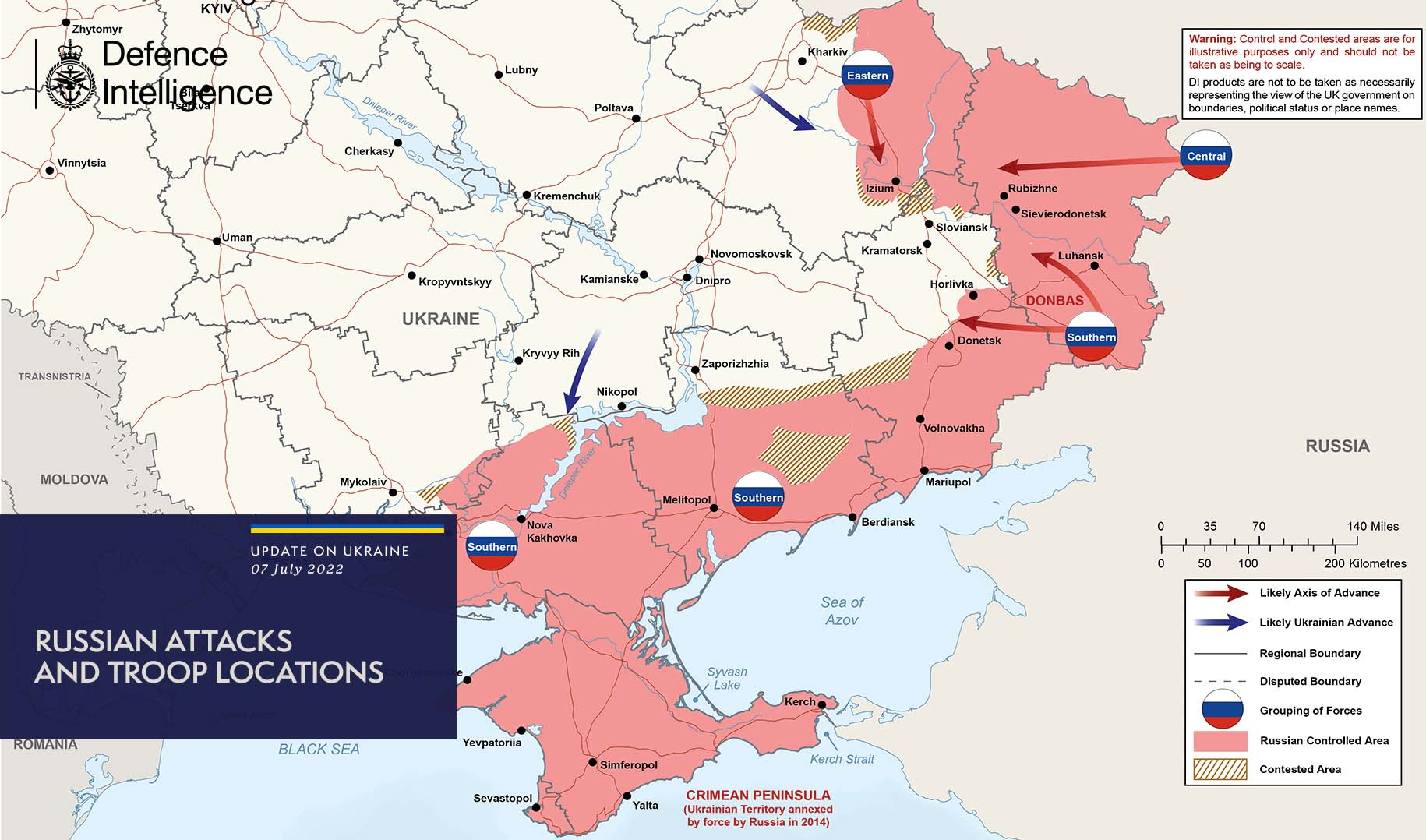 You can begin to see the changes to the lines in the east and south. Not a lot of change, but it’s there.

There was no DOD backgrounder today.

Here is former NAVDEVGRU Squadron Commander Chuck Pfarrer’s latest assessment and updated map regarding the Donbas campaign in the east:

KRAMATORSK AXIS /2040 UTC 7 JULY/ RU units are reported concentrating in the vicinity of Lyman. Any pending assault against Sloviansk would be met by a prepared UKR defense favored by ‘internal lines’– allowing quick concentration of force to counter RU maneuver elements. pic.twitter.com/JohgsKV2uT

A lot of stuff seems to be happening in Kherson Oblast.

At the entrance to the occupied #Kherson, Ukrainian partisans posted a bloodied uniform of a #Russian soldier with the letters Z and V.

"Wait. We are going," the partisans say. pic.twitter.com/xbdSVHo5cG

At Dobraynka, Kherson region, Ukrainian defenders almost completely destroyed a sabotage and reconnaissance group of the Russian fascist invaders and successfully repelled the assault that followed it. The rashists are failing to prevent the advance of Ukrainian units in Kherson. pic.twitter.com/8ClJHXvKTa

Let’s finish up with a bit more on Russia’s attempts to starve Ukraine and foment a global food insecurity crisis and several different regional famines.

Ukrainian wheat fields are burning. Ukrainian grain storages and food warehouses are being destroyed by Russian missiles daily. Ukrainian food is rotting in silos because Russia blocks ports and prevents its export.
Russia is working hard to starve millions across the globe https://t.co/OcAwbWZC9w

ISTANBUL, July 6 (Reuters) – Ukraine has asked Turkey to help investigate three Russian-flagged ships as part of Kyiv’s efforts to probe what it alleges is the theft of grain from Russian-occupied territory, according to official documents.

At the same time, Instanbul has let the Zhibek Zholy, which it had been holding in port on a request from Ukraine, go:

The ship arrived in Turkey carrying a load of grain stolen from the occupied Ukrainian territories, according to a statement by the Ukrainian foreign ministry.

The ministry said that "due to this situation," it "invited the Turkish ambassador in Ukraine to visit the ministry."

And we finish with your daily Patron!

I don't know how Twitter relates to nudes, but… #Patron #patrondog #Ukrainian pic.twitter.com/Zluqu2gi1Z

And a new video from Patron’s official TikTok page!