You are here: Home / Archives for Hillary Rettig

Hillary Rettig wrote for Balloon juice for about a year from 2016-17.

The Romanovs abdicated today, and so shall I. As you might have predicted from my recent sparse posting, I’ve decided to give up my front page status. That’s for a lot of reasons, including that I’ve got a bunch of other writing projects going on, and there’s a limit to how much time I can spend at a keyboard.

I’m really grateful to John for the opportunity, and also to the other Front Pagers (esp. Betty and TaMara and Alain) for their help and support at various times.

The best part of the gig was the Juicers I met in person during the Meetups. You were all wonderful!

And getting to support my favored candidate–by whom I mean, of course, Baud. :-)

Best to everyone here – I’ll be lurking!
Hillary

END_OF_DOCUMENT_TOKEN_TO_BE_REPLACED

Flushed with triumphalism, and following in the footsteps of minions throughout history, last week the Kalamazoo GOP put up a billboard just down the street from me celebrating the person of their Dear Leader and promoting his slogan.

It lasted less than a week before some good person made the necessary adjustments.

FYI Kalamazoo’s GOP party has also brought us Rep. Fred Upton, slimy heir to the Whirlpool appliance / outsourcing fortune, and one of the worst of the worst. 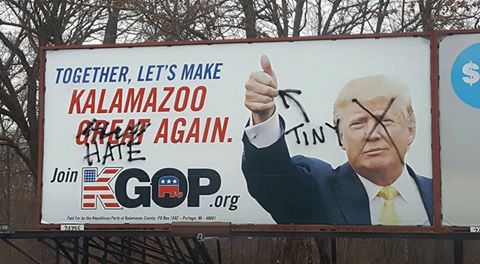 Lots of weekend news to keep discussing, so let’s open a thread.

END_OF_DOCUMENT_TOKEN_TO_BE_REPLACED 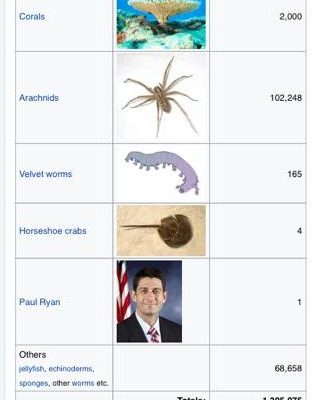 For one brief, shining moment this afternoon, Wikipedia listed Paul Ryan as a species of invertebrate.

The edit is gone now, but yet, somehow, I don’t think it will be forgotten.

And, yeah, I’m putting this right in Faunasphere!

Open thread for discussion of all things backboned and otherwise.

END_OF_DOCUMENT_TOKEN_TO_BE_REPLACED

There’s been a lot written about “resistance” lately, and I’m all for it, and of course it’s a wonderful topic for Martin Luther King, Jr. Day.

I’ve done my share, but never anything like what animal activist (and FOIA ninja) Ryan Shapiro describes:

My first arrest was at Ringling Brothers in 1997. We locked ourselves together using steel pipes to prevent the circus from getting the elephants into the auditorium. For a period of hours, our action shut down the circus (and led Ringling Brothers employees to position the elephants such that they urinated on us, resulting in us marinating in gallons of elephant urine both while locked down at the circus and then later in jail in Southeast DC).

Now, after 146 years of abducting, enslaving, and torturing animals for profit and amusement, Ringling Brothers is shutting down for good. I honestly can’t believe it. However Ringling Brothers’ PR team might spin this, there is simply no question that decades of aggressive animal rights activism of all sorts played a critical role in bringing this behemoth of cruelty to its knees. Amazing. We actually did it. We ended Ringling Brothers.

Now we need to end the rest as well. Whatever your style of activism, go do it. Do it now. Do it more. Do it better. Get the fuck out there and keep doing it. I’m so proud to be part of this great struggle for freedom and justice with all of you. Together we just killed a giant. Now on to the next. Animal liberation now. 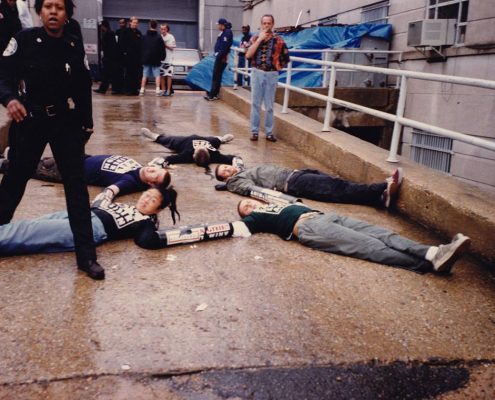 The point is not to convince everyone to put their bodies literally right on the line (against animal exploiters or Trump or any other oppressor) like Shapiro and his colleagues did. (Although if you can, more power to you!) It’s to talk about implacability, which I think is a key ingredient of any resistance / revolution. Animal abusers and exploiters know we (the animal rights / animal liberation / vegan community) isn’t going away or relenting–in fact, that we’re just going to get stronger–and that gives us a lot of power.

It’s similar, really, to what I see in this community when a nonhuman or human community member needs help. The community galvanizes, everyone gets focused, people contribute their unique talents and resources, and the job gets done.

Looking forward to people’s thoughts about implacability and other aspects of resistance. One thing that helps is that you don’t focus too much on the opposition and how big and scary it is. You focus on the job, and on supporting your comrades.

END_OF_DOCUMENT_TOKEN_TO_BE_REPLACED

First, in honor of the holiday, I’ll mention that Dexter King is, and the late Coretta Scott King was, vegan. Both saw veganism as a natural extension of Dr. King’s nonviolence philosophy.

Now, onto the victory:

On Saturday, officials of the company that owns the Ringling Bros. and Barnum & Bailey Circus announced that it will close in May, ending a 146-year run that dates back to a time before automobiles or airplanes or movies, when Ulysses S. Grant was president and minstrel shows were popular entertainment.

What killed the circus? There are many suspects: increased railroad costs. Costly court battles with animal rights activists that led to an end to elephant acts — and the fact that some people didn’t want to see a show without elephants.

Or with any other captive, tormented creature.

Although some may feel a nostalgic pang, keep in mind that: 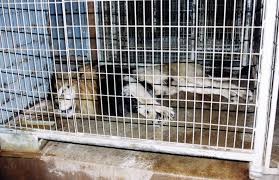 1) Ringling was an egregious serial animal abuser and violator of the Animal Welfare Act.

3) You can have some good circus fun absent the cruelty and abuse.

This is a particularly sweet victory coming mere months after SeaWorld’s announcement that it will cease orca breeding and performances, and TripAdvisor’s announcement that it will delist many animal-themed entertainments. One day–and probably sooner than we all think–live-animal entertainment will be considered an embarrassing relic, and we’ll all be grooving on virtual attractions and wondering what all the fuss was about.

There’s been some effort to dilute the role of animal activists in this victory–talk about transportation costs, etc.–so I’ll let Kenneth Feld (chair and CEO of Ringling’s parent company, Feld Entertainment) have (almost) the last word: “In the past decade there’s been more change in the world than in the 50 or 75 years prior to that.”

Thanks to the decades of activists that made this happen, and thanks in advance to the activists who will open even more cages in the future.

END_OF_DOCUMENT_TOKEN_TO_BE_REPLACED

A couple of years back, I had the great good fortune to hear Dr. Arthur Kleinman, who holds professorships in medical anthropology and psychiatry at Harvard and Harvard Medical School, AND is a former director of Harvard’s Asia Center – what an underachiever! :-) – speak on “Caregiving and the Moral Experience.” His talk really inspired me, and I’ve been a fan of his work ever since.

In an article in The Lancet entitled, “Caregiving: The Odyssey of Becoming More Human,” he writes movingly of his own experiences taking care of his late wife Joan, who suffered from Alzheimer’s disease. And he says of caregiving in general:

Caregiving is also a defining moral practice. It is a practice of empathic imagination, responsibility, witnessing, and solidarity with those in great need. It is a moral practice that makes caregivers, and at times even the care-receivers, more present and thereby fully human. If the ancient Chinese perception is right that we are not born fully human, but only become so as we cultivate ourselves and our relations with others — and that we must do so in a threatening world where things often go terribly wrong and where what we are able to control is very limited — then caregiving is one of those relationships and practices of self – cultivation that make us, even as we experience our limits and failures, more human. It completes (not absolutely, but as a kind of burnishing of what we really are — warts and all) our humanity. And if that Chinese perspective is also right (as I believe it is), when it claims that by building our humanity, we humanise the world, then our own ethical cultivation at the very least fosters that of others and holds the potential, through those relationships, of deepening meaning, beauty, and goodness in our experience of the world.

Caregiving is hard, and often goes unrewarded, unappreciated, and even unrecognized. But this thread is in honor and recognition of the many caregivers–of humans, nonhumans, the sick, the elderly, and the young–within the Balloon Juice community. Please tell us your story, update prior stories, and especially to share your tips and advice and support.

PS – don’t forget the Writers Thread, which TaMara and I will do at 12:30 today.

END_OF_DOCUMENT_TOKEN_TO_BE_REPLACED

Sorry for the lack of recent Faunaspheres. I’d have to say that most vegans and animal rights activists are as bummed by the recent election as everyone else, so not a lot of action recently. But I’ve written here before of the tragic life of Tilikum, the orca who endured a terrible decades-long captivity in cruel conditions at SeaWorld, and was responsible for three human deaths (at least one of which SeaWorld tried to cover up, and the last of which they tried to pin on the trainer).

His death was announced yesterday. Despite all the “care” he supposedly got at SeaWorld, he was 36, well on the short end of what would have been his natural lifespan.

A drooping dorsal fin, bite scars from hostile orcas he had been caged with when young, and ruined teeth from chewing on his enclosures testified to his decades of mental and physical misery.

His story was immortalized in Blackfish, which is streaming on Netflix and Amazon.

Also, ICYMI, Rolling Stone just published an amazing expose of evil puppy mills. (Warning–the text and photos are both hard to take.) I won’t quote it because I know many of you are already familiar with (and properly enraged by) the issues. (But please read it!) But notice this: “We have millions of dogs on our streets, put down two million of them every year – and impose no limits on the number of dogs millers can breed. In England, by contrast, you need a license to breed even a single dog – and only 5,000 were euthanized in 2015.”

There has been good news:

Last year, SeaWorld bowed to decades of pressure and announced that it would no longer breed orcas and would phase out orca performances. (Virtual reality is cheaper / easier than maintaining live orcas, anyway!) In the meantime, many other orcas remained enslaved in the “entertainment industry.”

Although many poor dogs remain stuck in mills.

(And, just to remind you: the good folks at TripAdvisor said they would remove many “animal attractions” from the site’s listings.)