Just Shut the Fuck Up

You are here: Home / Archives for Just Shut the Fuck Up

Georgia Gov. Kemp on Trump's dinner with antisemites and a white nationalist: “Racism, antisemitism and denial of the Holocaust have no place in the Republican Party and are completely un-American.”https://t.co/N361PGRaS6

Who the fuck do these guys think they are fooling? Why are they allowed to just spew this bullshit with no one in the media or elsewhere calling them out.

Second, let’s look at the record of Kemp, which has been nothing but racist attempts to disfranchise any constituent who wouldn’t look like an extra at the Masters.

And finally, this bullshit that there is something un-American about racism or anti-semitism. It’s not only not un-American, but racism is one of the foundational tenets of our society from the fucking initial constitution onward. And it has been embraced with open arms by the Republican party of which Kemp a member. In just the past few decades the very same Republican party swelled it’s ranks with former Dixiecrats, Ehrlichman and Nixon launched the war on drugs to use it to lock up black people and hippies in the sixties and seventies to Lee Atwater spilling the tea to school busing riots in Boston to redlining to the growth of HOA’s to putting highways through black communities to the way we use property taxes to fund schools to the last forty years of an overt attack on anything in the public sphere because if minorities get to benefit alongside white people well we just gotta get rid of that shit. Do you know how many public pools we filled with concrete instead of letting black people use them.

END_OF_DOCUMENT_TOKEN_TO_BE_REPLACED

If one more idiot tries to blame Biden or any other member of this administration for “supply chain issues,” I am going to no longer keep up the facade of my sparkling demeanor and I am going to lose my shit on everyone. The supply chain is not some inanimate object that you break like you dropped a wine glass. It’s not something you can fix with solder and duct tape. It’s not actually even a fucking chain.

It’s not dark fucking magicks, it’s people, although if you ask any Sergeant Major or Colonel and above anywhere they will tell you that logistics is in fact one part dark magic of some sort.

So when there is a pandemic that is sickening and killing large numbers of those people in a population, and even worse, half those people refuse to do anything to protect themselves because “mah freedoms” or to make a political statement or because Jenny McCarthy is a fucking twat, the supply chain breaks down. Biden isn’t sitting somewhere like Johnny from Airplane the movie turning the power to the supply chain on and off. There just isn’t much he can do about it. There isn’t much GODKING Trump can do about it.

No one can do anything about it until you stupid motherfuckers do something yourself, and even then, there are going to be variants that wipe us out for a while. Grow the fuck up.

END_OF_DOCUMENT_TOKEN_TO_BE_REPLACED

These fucking whiners honestly think they are free speech advocates:

Saturday July 2021. A month that will live in infamy. If there is such a thing as “history” in the Biden–Orwell–Soros omni-dictatorship, July 2021 will mark the month that the Constitution, the “greatest work ever thrown off by the hand and mind of man,” as Gladstone put it, was thrown into the Ministry of Truth Memory Hole.

It was put into the “History Erase” well. A bottomless pit.

In this month, actually starting with the month before, that the superpowers of the tech world, Google, YouTube, Amazon, Twitter, Facebook, and Yahoo, admitted to working with the Biden/NKVD administration to suppress free speech.

If there is so much fucking censorship how come I hear every single fucking one of their bad ideas? I literally can go to youtube and search for “best way to cut a mango” and within three clicks a video from PragerU is telling me there was something to pizzagate.

END_OF_DOCUMENT_TOKEN_TO_BE_REPLACED

Gov. Greg Abbott on Friday took his most drastic action yet to respond to the post-reopening coronavirus surge in Texas, shutting bars back down and scaling back restaurant capacity to 50%.

He also shut down river-rafting trips, which have been blamed for a swift rise in cases in Hays County, and banned outdoor gatherings of over 100 people unless local officials approve.

“At this time, it is clear that the rise in cases is largely driven by certain types of activities, including Texans congregating in bars,” Abbott said in a news release. “The actions in this executive order are essential to our mission to swiftly contain this virus and protect public health.”

Bars must close at noon Friday, and the reduction in restaurant capacity takes effect Monday. Before Abbott’s announcement Friday, bars were able to operate at 50% capacity and restaurants at 75% capacity.

“At this time.” Let that sink in. “AT THIS TIME.” Motherfucker this was clear MONTHS ago and why every state run by reasonable, sane, people, including my redneck gomer Jim Justice and right wing anti-abortion nutjob Mike Dewine in Oho shut their fucking states down. “AT THIS TIME.” Fuck you.

Side note- some days I worry that I am losing control of the English language, because I am so exasperated with these people that all I can muster half the time is “fucking asshole” or “this fucking idiot” or “you stupid cocksucker” or something similar. I tried to come up with something different to begin this, and sat there for five minutes, and really all I could write was “This fucking idiot.” It’s just where I am now, so humor me.

Back to the point- this has been obvious for, well, in 2020 terms where every day is a week and every week is a month and every month is the longest century ever, this has been obvious for fucking ever. People with an iq over room temperature have been expecting a second wave since the start of this thing. Where they erred was that YOU FUCKING PEOPLE ARE SO AWFUL you never let us get out of the first god damned wave.

But it just didn’t have to be this way. After decades of rushing off to fight elective wars of choice, for once there is a battle we have to fight, and Republicans surrendered. And we had ample warning.

CHINA BUILT A FUCKING HOSPITAL IN TEN DAYS. That’s when I ordered masks and supplies, fer fuck’s sake. And I am no rocket surgeon. And I am bracing for the fall, when the supply chains and economy are really going to tank. I have a turkey picked out, I’m splitting a pig with a friend, I went in on a 1/4 cow with three others, I spent my stimulus check on raised beds and an irrigation system and mason jars and lids, and I am going to grow and can my ass off.

But it didn’t have to be this way. You stupid motherfuckers.

END_OF_DOCUMENT_TOKEN_TO_BE_REPLACED

One of the aspects of the decline of the right wing mind that we are going to have to deal with for decades to come is the choice to remain proudly and defiantly stupid while insisting that you know as much as the experts. I have seen several posts like this by anti-mask imbeciles that proudly demonstrate the point: 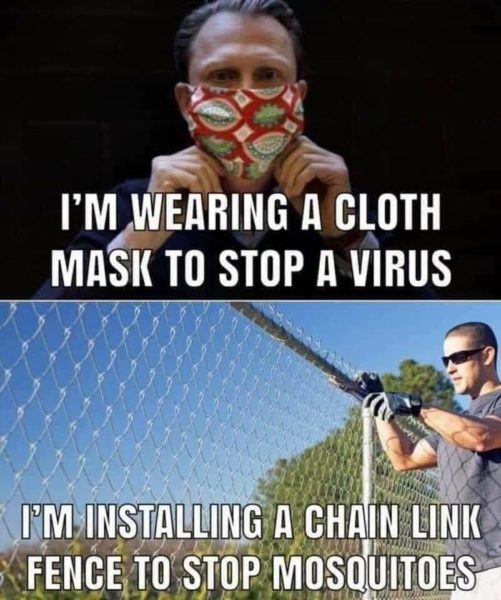 It’s a microcosm of Republican thought the last few decades, and no different from arguing that the estate tax is actually a TAX ON YOU DYING and the other hundreds of similar arguments. It’s absurd and stupid, but reiterated and elevated to the point of being the received view among true believers.

This one is particularly maddening- yes, a virus is smaller than a cloth mask. Everyone fucking knows this, including the mask maker, the people suggesting people wear masks, and, you know, the folks who designate masks as N-95, where the 95 stands for the 95 fucking percent of shit it will filter out. That means they know 5% gets through.

But like every right-wing argument, that misses the fucking point. The reason you wear masks is not for 100% certainty or protection, but because the virus is transmitted by being aerosolized when individuals speak, breath, yell, cough, sneeze, etc., and is carried through the air in droplets, where it can infect other people who inhale it, or if it gets in through their eyes, or it gets on their skin and they then get it into their eyes, mouth, nose, or it gets on a surface where it can stay for several days for someone to pick up that way. You wearing a mask reduces the chance that if you are carrying it, you are blasting out the plague every time you breathe, cough, talk, yell. It reduces the chance that you inhale it, because the droplets will get caught in the outside of your mask, and also why disposable masks are FUCKING SUPPOSED TO BE… DISPOSED OF.

To ignore the advice of the medical community, you have ignore everything above AND think that doctors for some reason have been running a long con since, well, fucking germ theory, and have been wearing masks forever just to one day get to this point, where, they could claim a false pandemic and force everyone to wear masks to IMPOSE THEIR WILL ON YOUR FREEDOMS.

END_OF_DOCUMENT_TOKEN_TO_BE_REPLACED

Please stop telling my preferred candidate to drop out when only three states have voted.

Two minutes after posting this, I learn that Buttigieg is suspending his campaign. He was not my preferred candidate, but this seems very newsworthy.

Pete Buttigieg is heading back to South Bend and will give a speech tonight suspending his campaign, according to an aide.

END_OF_DOCUMENT_TOKEN_TO_BE_REPLACED

Twelve Russian military officers have been indicted for breaking into the Democratic Party's computers, stealing compromising information and selectively releasing it to undermine candidates https://t.co/I8toBG9Vcf

There was a lot of testimony during this past week’s impeachment inquiry about foreign interference in our 2016 election, including the president’s assertion that Ukraine was involved. But the president’s own intelligence agencies say it was the Russians who “hacked” the 2016 elections. Special counsel Robert Mueller spelled it out in his report.

Now the Justice Department has at least two open cases against Russian citizens for interfering with our presidential and congressional races, we decided to take a closer look at one of them – the case against 12 Russian military officers accused of breaking into the Democratic Party’s computers, stealing compromising information, and selectively releasing it to undermine Democratic candidates. There’s no evidence of similar operations against Republicans in 2016. With the 2020 election approaching, the story of “The Russian Hack.”

Robert Anderson: The Russians never left. I can guarantee you in 2016 after this all hit the news, they never left. They didn’t stop doing what they’re doing.

Robert Anderson: No way. Russia doesn’t do it that way.

Robert Anderson should know. He spent 21 years inside the cloak and dagger world of spies and hackers overseeing the FBI’s counterintelligence and cyber Divisions and tracking Moscow’s spy agencies, an alphabet of artifice, the FSB, SVR, and, especially, the GRU.

Robert Anderson: The GRU is military intelligence. So when we look at the attacks that happened during our presidential races in 2016 you had military organizations inside of Russia attacking our infrastructure…

These are the hacker-soldiers from GRU unit 26165 who, according to the Justice Department, were responsible for “breaking and entering” into the Democratic Party’s computers remotely, from Moscow. Their names, ranks and faces are now on the FBI’s most wanted list for stealing, among other things, the Democrats’ strategic plans, detailed targeting data, and internal polling. GRU Colonel Aleksandr Osadchuk commanded a separate unit, 74455. One of his officers was in charge of spreading the stolen material to political operatives, bloggers and the media. Another hacked state election boards.