You are here: Home / Archives for local races

"Now y'all, a woman has never been nominated for governor in the state of Ohio and you all just changed that," Nan Whaley said after winning the Democratic nomination for governor in the Ohio primary election. Read more: https://t.co/1QewN19n8A pic.twitter.com/P7NoRIbLQM

Author and venture capitalist J.D. Vance has won Ohio’s GOP Senate primary, the AP projects, in a victory that demonstrates the influence of a endorsement by Donald Trump https://t.co/Gk98gdALld

END_OF_DOCUMENT_TOKEN_TO_BE_REPLACED 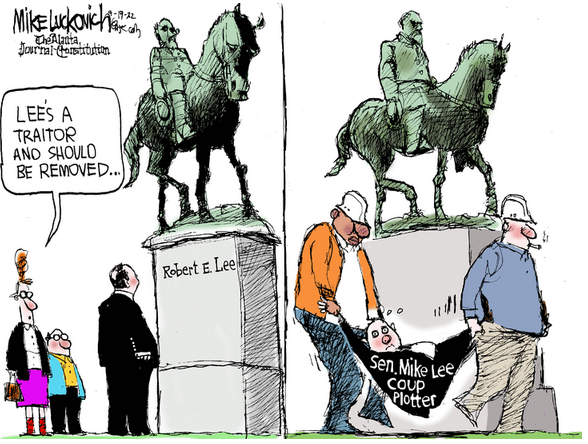 Utah Democrats voted on Saturday to support independent candidate Evan McMullin, rather than a member of their own party, in an effort to unseat Republican U.S. Senator Mike Lee.https://t.co/XURWDB4Rrc

I’m sure Mr. McMullin is a very nice man, who would be a wonderful neighbor, and certainly an immense improvement on Mike Lee. On the other hand, I also foresee a Senator McMullin cheerfully explaining how it’s only logical to vote for every racist, misogynistic proposal his more bloody-minded comrades propose, as long as the wording is sufficiently ‘centrist’. Oh, well, it’s Utah…

END_OF_DOCUMENT_TOKEN_TO_BE_REPLACED

Attendee at Chuck Grassley’s town hall asks him why we are against Putin since he is fighting the problems of Nazis, biolabs, pedophelia, and Deep State corruption in Ukraine. No John McCain moment correcting him coming from Grassley. Of course. pic.twitter.com/ukQgaC8ydl

Assuming you still can…

END_OF_DOCUMENT_TOKEN_TO_BE_REPLACED

"i know lots of rich people who will give me tens of thousands of dollars and i'm confident they'll never ask me for favors" pic.twitter.com/oBygjS74ox

#GOLIKEHELLMACHINE lives in Oregon, as it happens…

People have perfectly reasonable biases against Olivia Nuzzi, but as a journalistic assassin, she’s bettered only by Isaac Chotiner. From NYMag, “How the lauded Times columnist lost the race for governor of Oregon before it even began”:

By the time I arrived in Yamhill, Oregon, Nicholas Kristof’s political career had already ended in a face-plant. “I didn’t feel any burning ambition to be a politician whatsoever,” he told me. Good thing. From start to finish, from his decision to quit the New York Times to the state Supreme Court decision that ruled him ineligible to hold the office, his campaign for governor lasted all of 114 days. Now he was no longer a columnist or a candidate, and about this outcome he claimed to be at peace…

A Pulitzer Prize winner once described as the conscience of a generation of journalists, Kristof devoted his life to chasing stories of poverty and genocide in places like Darfur and Sudan before epidemics of addiction and homelessness called his attention back to his home state. “I spent so much time reporting abroad in Afghanistan and Iraq and thinking this is really important and trying to convince people in the U.S. that this is important. And I deeply believe it was,” he told me. “But last time I calculated, every three weeks in the U.S., we were losing more Americans to drugs, alcohol, and suicide than Americans who died in 20 years of war in Iraq and Afghanistan.”

He became convinced that he could help save Oregon, he said, after the 2020 publication of Tightrope: Americans Reaching for Hope, the oddly chipper book (and companion documentary) he wrote with his wife, Sheryl WuDunn, to document working-class suffering through the decline around Yamhill. “People will always come up and say, ‘Oh, you should run for office. We need you here,’ ” he said. It happened at book signings and Q&As and receptions after his speeches. “I just dismissed it,” he said. Until he didn’t. The Democratic-primary field looked weak. Tightrope had functioned, intentionally or not, as a briefing book for a better candidate. And Kristof could swear he detected a vibe that communicated the public was desperate for “transformative change,” the redundant inspirational slogan favored by Establishment technocrats plotting a revolution of efficiency powered by the consultant class. He came to believe that he could become governor and that he ought to be governor…

Kristof looked the part when he greeted me at the farm in a vest, a flannel, frayed jeans, and the kind of practical and unsightly footwear favored by those who have accrued more than their fair share of REI Co-op Member Rewards points. He made his way past the Honda Accord and Subaru with COEXIST and I’LL BELIEVE CORPORATIONS ARE PEOPLE WHEN TEXAS EXECUTES ONE bumper stickers parked in the garage, while his two dogs, Chloe and Connie, darted ahead into the grass. (Asked later about the Subaru, Kristof said that it belongs to his 89-year-old mother.)

The vineyard was teeming with the buds of Pinot Noir grapes that Kristof plans to harvest for the first time in the fall (already, a mile down the road in Carlton, Kristof Farms cider goes for $11 a bottle at a deli on Main Street, where the girl working the cash register reports it’s been selling pretty well). As he led me to a trail beyond its edge, he talked about his friends and neighbors who had overdosed or committed suicide. Just that morning, an addict he knew had posted a suicide note on Facebook. “I don’t think that most people appreciate that most years, alcohol kills more people than drugs,” Kristof told me, though he clarified that he does not believe this is true of the type of alcohol that he makes. He also does not think that profiting off the sale of alcohol and lowering rates of alcohol addiction, two of his stated immediate goals, are in conflict. “You know, I’ve lost friends to alcoholism, but I haven’t lost any to Pinot Noir alcoholism,” he said…

The Poors — they just can’t handle intoxicants, unlike those of Our Class. It wouldn’t be a true Second Gilded Age without professional Goo-Goos giving high-minded lectures for the betterment of us proles.

END_OF_DOCUMENT_TOKEN_TO_BE_REPLACED

Eh, dumb of me to hold out the possibility that DeSantis might be only 97% scumbag instead of 100% scumbag https://t.co/qNV5xnuvXO

Of course, as we know, even vaxxed & boosted individuals can catch the ‘rona, so maybe he is sick. But there’s also various ‘fled the country, to Cancun’ japes going around, so…

As COVID surges in Florida again, our governor is absent. So here I am doing his job and mine with an update. pic.twitter.com/d0M4Bp6R6m

The mayor of Orange County said Gov. Ron DeSantis has been missing in action during the latest wave of COVID-19 as local governments have been forced to figure out how to respond to the omicron variant on their own. https://t.co/wGaCdI8nGC

END_OF_DOCUMENT_TOKEN_TO_BE_REPLACED

You want some good news?

I’m running for Governor because opportunity in our state shouldn’t be determined by zip code, background or access to power. #gapol

END_OF_DOCUMENT_TOKEN_TO_BE_REPLACED

this is one hell of an ad from the Democrat running against Republican Nancy Mace. pic.twitter.com/uLFnM2ycqf

This does, indeed, seem like an excellent ad for Dr. Andrews. Anyone want to talk about the chances of unseating Rep. Nancy Mace?

I am so excited to announce that our campaign raised over $200K in the first 24 hours! This amazing support proves that we can flip #SC01 and put a pediatrician in the House.

To everyone who has already donated, from the bottom of my heart, thank you.