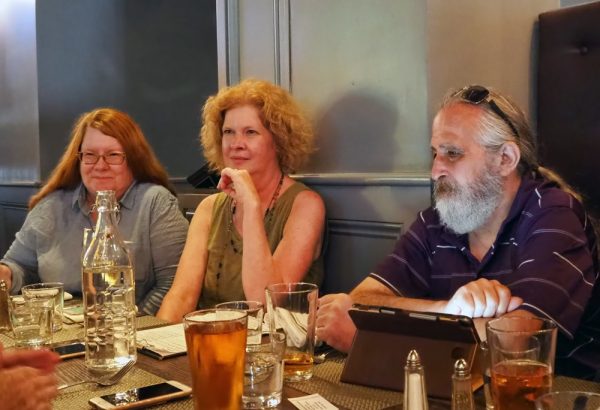 Here are a few pictures from the NYC meetup Sunday evening. Thanks to NotMax for making the arrangements — a wonderful time was had by all. There were so many of us that unfortunately we couldn’t all fit into one picture, and somehow LAO managed not to be in any of them. 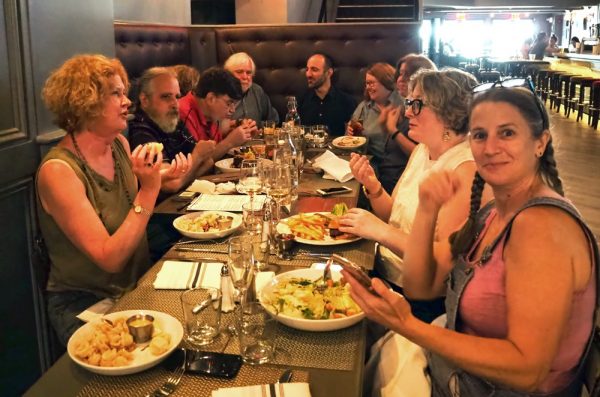 I’ll let everyone who wishes to identify themselves. I’m in the left front of the picture below. 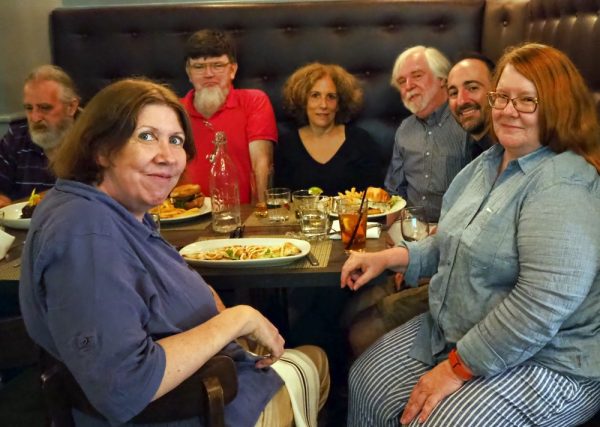 Obligatory food report: We met at Tir Na Nog, an Irish pub with a varied menu and an excellent selection of beers on tap. The photo below is of my chicken quesadilla, because no one makes a quesadilla like the Irish. 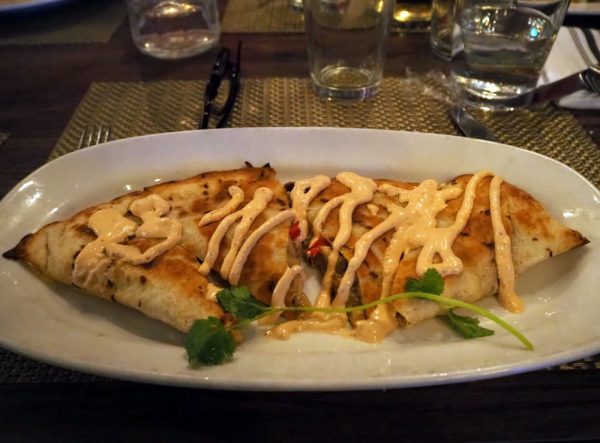 END_OF_DOCUMENT_TOKEN_TO_BE_REPLACED

In a shit mood but this made my day: 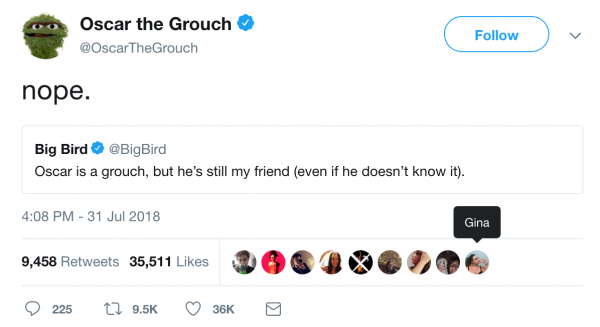 How are you all?

END_OF_DOCUMENT_TOKEN_TO_BE_REPLACED

This, IMO, is the kind of brilliant back-and-forth Twitter was invented for…

some of y’all don’t understand this tweet because you don’t know how you sound when you accommodate racism.

we will never get anywhere being smug about restaurantally-tinged divisiveness. https://t.co/h1n3qpJI1a

“Did you know that some waitstaff are people of color?” @jdesmondharris, in the mocking voice of a dullard making a prediction while reading my mentions.

they haven’t because they refuse to step outside their bubble. https://t.co/ZnefLjnG3d

i knew it was going to happen before i tweeted it but i still had to let it fly, fam. lol

When it comes to tipping, there are very fine people on both sides. https://t.co/2r8ky3vvrM

There was a time in this country when we didn’t tip well enough, which was wrong I guess, but there was this waiter who got promoted to manager in 2008 so our entire non-tipping legacy is redeemed and now you’re just whining and I’ve beaten this into the ground now and I’ll stop.

the nyt picked this up yet?

Who do you suppose published the inspiration for this snark in the first place?

To start a real conversation about racism ignore the harm done to people of color especially Black people & make it all about preserving the feelings of white people…y'all. I need us to just write the Times off for good & move it along okay? Okay. pic.twitter.com/WzI68ClanI

Remember: The advice to liberals is always "Be nice to the racists;" it's never "Hey, racists, be nice to the rest of us." https://t.co/eUmOrpwyya

END_OF_DOCUMENT_TOKEN_TO_BE_REPLACED

Okay, this post is really about pushing those hideous deplorables in the previous post below the fold.

Dog Meets Owner At Door In Desperate Attempt To Get Ahead Of Diarrhea-Rug Scandal https://t.co/Gb6mFj5389 pic.twitter.com/VAuEsyhazy

But this Onion tweet’s got it all, doesn’t it? A naughty dog, a household item ruined by a pet calamity and a whiff (har) of scandal? It’s like the Balloon Juice trifecta. Open thread!

END_OF_DOCUMENT_TOKEN_TO_BE_REPLACED

Trump will be in Tampa later today. First he’ll snarl rush hour traffic to visit a technical high school, and later he’ll hold a campaign rally at the Florida State Fairgrounds. The people pictured below are camping out at the fairgrounds to make sure they’re first in line:

Gene Huber, 48, claims to have been the first in line to wait for the rally. He got here around 2 p.m. yesterday, he claims. His shirt features a picture of him hugging President Trump at a rally last year in Melbourne, Florida. This is his 11th rally, he says. @TB_Times pic.twitter.com/SraV2vs3Si

For context, keep in mind that this is July in Florida. The sun beats down like a sledgehammer, and just breathing the humid air is like huffing dragon farts. Afternoons are enlivened by dramatic thunderstorms, with sheets of pounding rain punctuated by frequent lightning. And these dumb fucks are camping out on the asphalt by the side of a busy road. For Trump.

As the tweet notes, the guy in the center of the photo has been to 10 Trump rallies already and wears a shirt picturing himself hugging Trump. Nothing weird or cult-like about that, nosiree.

But I’m more intrigued by the outfit of the woman at left. She has apparently sawed the top off a wicker basket and is wearing that around her midsection, presumably to indicate her occupancy of the “basket of deplorables.” I didn’t get it at first, and I’m fairly well-versed in Cult45 symbology. I bet 95% of the folks who notice her are thinking, “Why is that woman wearing a stiff, ill-fitting wicker belt?”

Anyway, here’s hoping swarms of mosquitoes and plagues of ditch-gators immiserate these fools until the gates open. And may Lady Deplorable consume so many burgers from the nearby Five Guys that she has to be extracted from her basket via a hack saw. I’ve got no sympathy for these people, nor a desire to understand them; only a burning desire to see them defeated.

END_OF_DOCUMENT_TOKEN_TO_BE_REPLACED

????On July 30, 1974, President Richard M. Nixon surrendered the first group of subpoenaed Watergate tapes that the U.S. Supreme Court had ordered him to turn over to Federal District Judge John Sirica pic.twitter.com/PA00cV3CH8

D.C., as the company town where politics is the monopoly, and its hometown the Washington Post, are of course engrossed by the details of Paul Manafort’s career. “From six homes to a city jail: Paul Manafort, who redefined lobbying, faces trial”:

… On Tuesday, when his trial on bank and tax fraud charges begins in federal court in Alexandria, prosecutors working with special counsel Robert S. Mueller III will seek to keep him behind bars.

For the first time, an investigation into Russian election interference that has operated largely behind closed doors will reveal some of its work. A conviction on the 18 counts brought against Manafort would add credibility to Mueller’s ongoing inquiry. Failure would underline the criticism he has received from President Trump and others who suggest that Mueller’s operation is a partisan “witch hunt.”

Since he was appointed in May 2017, Mueller has charged 32 people, including 26 Russians and several people involved in the Trump campaign. Five people, including Manafort’s onetime business partner Richard Gates, have pleaded guilty. Manafort is the first to go to trial, and he faces a second court battle on related charges in D.C. federal court this fall…

He gained respect early in his career by helping Gerald R. Ford survive the contested 1976 Republican National Convention — and then a reputation for cunning when he quickly shifted his loyalty to the president’s ascendant challenger, Ronald Reagan.

In 1980, his newly formed lobbying firm, with partners Charlie Black and Roger Stone, made its mark consulting for Reagan.

Manafort handled most of the firm’s foreign clients, and some leaders had reputations so dubious that one nonprofit group cited the firm as part of a “torturers’ lobby” for taking on violent dictators in Nigeria, the Philippines and Angola…

But by the mid-2000s, there were signs that his consulting ­career had slumped, and at times his finances appeared to be shaky. It was in Ukraine that he revived both — in ways prosecutors say violated the law. Out of $75 million that flowed to Manafort-controlled offshore accounts over 10 years, more than $18 million was “laundered,” prosecutors allege, with income concealed from the U.S. government that they say was used to pay for the former lobbyist’s extravagant tastes…

Bloomberg, on the other hand, is more interested in exactly what Manafort spent those purportedly dishonest dollars on…

The documentary linked below is almost 18 minutes long, but it’s a very brisk summary of what’s at issue today and in the coming weeks…

Just in time for the Manafort trial => https://t.co/epRw8TSaNy

END_OF_DOCUMENT_TOKEN_TO_BE_REPLACED

CMS just announced that it had approved Maine’s 1332 waiver application to run a reinsurance program. This is not surprising as CMS is gung-ho about reinsurance. It happen a week or two earlier than I thought but this is good news, CMS will process reinsurance waivers very quickly.

I was chatting with Charles Gaba. He noticed something odd about the waiver. The state’s actuarial models expect reinsurance to do a lot more in lowering rates than the insurers. There is nothing wrong with discrepancies, different models with different weights should produce different results.

Insurers are making informed guesses as to the effect reinsurance will have on their rates. Their guesses will be wrong. It matters in what direction the guesses are wrong though. If insurers think that reinsurance is super-duper wonderful and drop their rates far below what the actual claims experience is, they lose a ton of money and the C-level may not be employed. If insurers price their products on the assumption that reinsurance won’t do much, they are profitable. I think the incentives line up for insurers to try to price their products as accurately as possible with a bias towards thinking that reinsurance won’t be kittens and rainbows.

I used similar logic in thinking through CSR assumptions in the Spring 2017:

Now the interesting, to me part, is that Medical Loss Ratio (MLR) acts as an awkward one way risk corridor for mis-pricing reinsurance. If insurers think that reinsurance won’t do much to eat high cost claims and thus price high, and then are wrong as reinsurance eats all the big claims, they have a windfall year. However MLR acts as a cap on the windfall. If an insurer spends less than 80% of its qualified revenue on claims, it sends out rebate checks to its buyers.

So what does that mean?

I would not worry too much about the discrepancy between what a state regulator thinks reinsurance will do and what the insurers think it will do. If the insurers are wrong and price high, there is a limit to the windfall profits possible.