Their testimony was aired live on television. How was it distorted?

Yes, that is my point here: he said he didn't see the report, then immediately said that "when you read it," it's different than how it is portrayed. (Note: this is a public report everyone can read.) https://t.co/HqsHOlJajA

It’s not real unless it comes out of Fear Leader’s lie hole. https://t.co/iSRsorODkg

Wouldn’t be any worse than the EO’s Bannon & Miller wrote https://t.co/AXDPmRxB75

END_OF_DOCUMENT_TOKEN_TO_BE_REPLACED

It probably wasn't the best idea for the GOP to have just one go-to bagman for the last 30 years. https://t.co/TrSAfeAmDO

it hasn't gotten as much play but you have to understand that Roger Stone is to the entire GOP what Michael Cohen was to Trump. THE guy to handle all shady dirty low down jobs. Those search warrants could end up sparking all manner of criminal referrals and new investigations.

Stone is now subject to a protective order. He can't talk about what the government shows him in terms of evidence prior to the trial. https://t.co/j2kfxDmC4T

FBI Agent: You have the right to remain silent…

Stone has the right to remain silent, just not the ability. (With apologies to Ron White.)

END_OF_DOCUMENT_TOKEN_TO_BE_REPLACED

I won’t share the temperature range we experienced today for fear of being pelted with ice-encased snowballs by commenters living through polar vortex conditions. But by our standards, it’s chilly. Maybe that’s why this lazy fellow was reluctant to get out of bed this morning: 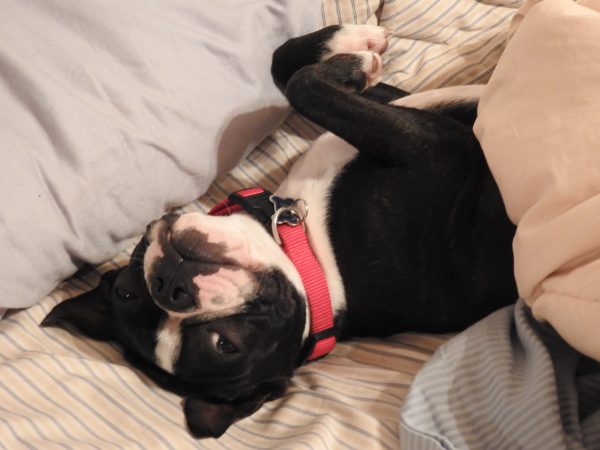 We don’t put clothing on our dogs. Maybe in some climates, it’s necessary. But I’ve always thought it would injure the dignity of an animal to clothe it.

Now I’m rethinking that. Perhaps my scorn for pet dress-up was due to the fact that, until recently, I’ve always had largish dogs. Daisy doesn’t seem cold in the least, but poor little Badger really does act like he needs a sweater.

END_OF_DOCUMENT_TOKEN_TO_BE_REPLACED

Guys, Ron Fournier is a Democrat! A Democrat who loves George W Bush, said that Obamacare was Obama’s Katrina and Iraq, and works for a PR firm that has no Democratic clients (one is non-partisan). That same PR firm was in charge of crisis communications for MSU during their sex abuse scandal (and did a terrible job, I must say).

But, he’s a Democrat. A self-hating Democrat, but a Democrat nonetheless. As well as a useless posing douchebag.

END_OF_DOCUMENT_TOKEN_TO_BE_REPLACED

"Millions of people are telling me not to shoot the American public in the face, but are they just making the case I should?"

You fucking idiot go buy an island and sod off. https://t.co/fr2MrGcmql

The country’s policies (despite the wishes of the majority of the people) have swung so far to the right on virtually every issue, whether it be protecting the bankers, tax policy, environmental policy, abortion rights, you name it. We won’t even feel the true impact of the total radicalization of the courts for decades. I’ll be 75 and we’ll still be suffering from the lunatics being put on the bench the past two years.

Anyone who supports centrism right now is basically ok with all of that. They’re ok with the status quo. What they want is today’s fascism, but with more polite dialogue and milquetoats Ted Talks and fewer four letter words and would you people please stop being mean to rich people eating in public and can’t we just agree to disagree while I strip away your voting rights and reproductive freedom and raise the price of your insulin 40,000%.

Fuck Howard Schultz. This country needs a hard swing leftward. After AOC’s second term as President and she has four new Justices seated we can talk about a couple test case blue dogs.

END_OF_DOCUMENT_TOKEN_TO_BE_REPLACED

Guess what, guys? The caravans are back, at least in Twitler’s defective brain and Twitter feed:

More troops being sent to the Southern Border to stop the attempted Invasion of Illegals, through large Caravans, into our Country. We have stopped the previous Caravans, and we will stop these also. With a Wall it would be soooo much easier and less expensive. Being Built!

So, if WALL is “Being Built,” why did shit-fer-brains shut the government down for a month-plus, threaten to do so again in 16 days and yap endlessly about declaring a national emergency to build WALL?

It’s a moronitude, wrapped in a dumbassery, inside an imbecility.

Trump has tweeted more than a dozen times so far this morning because he doesn’t do his job. I wonder who’s running the government? My guess is Jared since whomever it is sucks at his or her job, like a callow, unqualified nepotism hire inevitably would.

Anyhoo, each and every tweet is as idiotic as the sample above. No cherry-picking here!

END_OF_DOCUMENT_TOKEN_TO_BE_REPLACED

Covered California announced that more than 1.5 million consumers selected a health plan for 2019 coverage during the most recent open-enrollment period, a figure in line with last year’s total. There was a 7.5 percent increase in the number of existing consumers renewing their coverage and a 23.7 percent drop in the number of new consumers signing up for 2019.

This is in directional alignment with the experience of Healthcare.gov.  There renewals were flat year over year.  New enrollees were down by 15% year over year.

I think two seperate forces are pushing against each other.

We know that pricing is good for the subsidized population because of the termination of Cost Sharing Reduction (CSR) subsidies.  95% of the country is seeing the CSR costs loaded into the Silver premiums only which makes Gold and Bronze plans for subsidized buyers relatively cheaper than they otherwise would have been.  Anyone who goes and looks will see a good deal.  The renewal process is working rather smoothly and people who are already in the system are still seeing good enough deals to stick around for another year.

I think that once a subsidy eligible individual looks at the exchanges, they will likely see a good deal.  But the lack of a mandate has decreased the probability that someone who is subsidy eligible will look in the first place.  We can test this by seeing how many new accounts were created that never purchased insurance over time.

The change of the covered population to a higher level of retention can change some dynamics.  It reduces churn and it may increase the average duration of coverage at a particular insurer. Longer spans change incentive calculations for preventive care pushes.  I wonder if we need to think about closed blocks of business logic with the ACA?

Right now CSR Silverloading keeps the currently signed up, signed up while the lack of a mandate seems to push some incremental enrollees away from ever signing up.