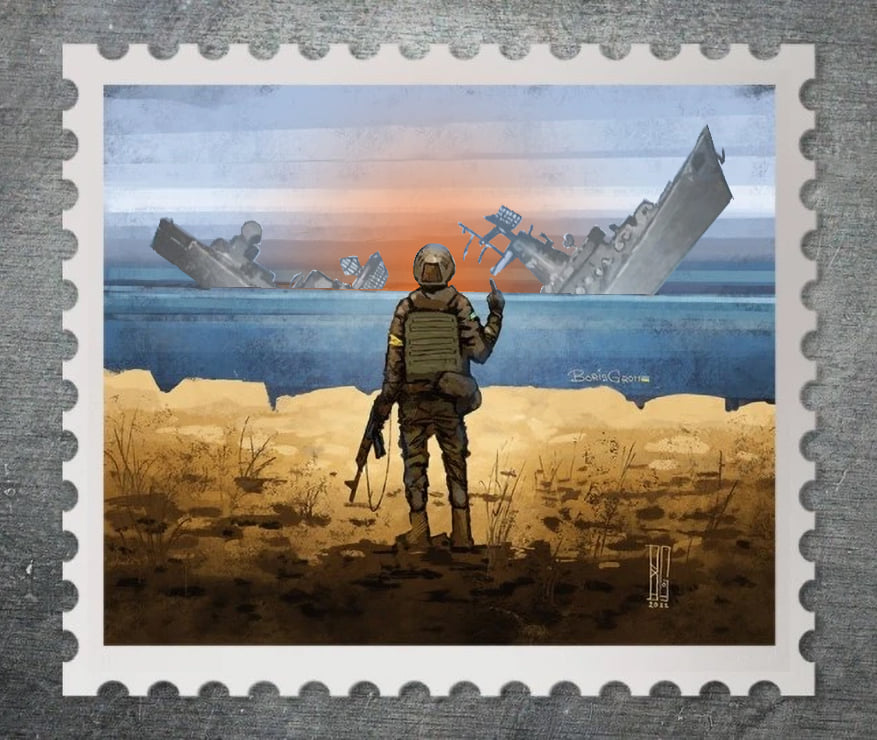 There is an important lesson here for the US and our EU and NATO allies. Putin doesn’t escalate if you stand up to him. He basically deflates and then (tries to) manipulate. The outstanding question is whether this lesson will be learned in DC, as well as the EU and NATO capitols.

Today, we have a significant diplomatic outcome for our country and the whole world – the Grain Export Initiative will continue being implemented. Russian blackmail has led nowhere.

The UN and Secretary General Guterres personally responded in a principled and effective way. The President of Türkiye, Erdoğan, also participated. Other key international actors also made timely and fair steps.

Once again, everyone saw that there is only one threat to global food security in our region, and that is the Russian Federation, and no one else.

This entire situation was immediately reflected in the stock exchanges’ indicators – we see some decrease in the price of both wheat and corn. Every time Russian blackmail intensifies, food prices rise. And every time the world does not give in to blackmail, foodstuffs become cheaper. And if there was no Russian attack on Ukraine, there wouldn’t even be a phantom threat of the global food crisis. Because every Russian missile that hits our ports, grain storage facilities, and power plants that power our agricultural production ultimately affects the standard of living of tens of millions of people in many countries. This includes Egypt, Algeria, Somalia, Sudan, Lebanon, Bangladesh, India, China, Indonesia, Vietnam… This year they overpaid tens of billions of dollars for food – and only because of Russia, only because of crazy Russian aggression that destabilizes international trade.

Today, I spoke with President Erdoğan, in particular, about the security of the grain corridor and the Black Sea in general, about the work of the Crimea Platform, about the return of Ukrainian prisoners of war and political prisoners – we remember each and every one who is in captivity, we will release everyone.

We also talked in detail about constant Russian provocations, about Iranian drones, about missile strikes by the Russian army. For example, this morning a Russian plane launched cruise missiles near Snake Island, and they actually flew over the grain corridor routes. And every such Russian launch – and they are almost daily – directly threatens food exports. And it is the partners’ responsibility to work together to reduce the Russian threat.

I held a meeting of the Staff of the Supreme Commander-in-Chief today. The agenda of the meeting is quite obvious. This is the situation on the front lines, in particular in Donetsk region, where the fiercest fighting is going on.

By the way, I want to commend the fighters of the 10th Separate Mountain Assault Brigade and the 79th Separate Airborne Assault Brigade for their steadfastness in repelling enemy attacks right there, in Donetsk region. It is especially difficult there these days – dozens of Russian attacks every day. Our guys are standing firm and not giving up a centimeter. This is true heroism. And I thank everyone who defends our Donetsk region!

Of course, we also discussed the situation in other areas at the meeting: Kharkiv region, Luhansk region, the south of the country, the situation on our borders. We are strengthening our positions everywhere and working towards the key goal – the complete liberation of the entire Ukrainian land.

I held talks with Minister of Foreign Affairs of Spain – he was in Ukraine today.

I thanked Spain for the new defense aid package for our country. We discussed what could further strengthen our defense. In particular, we are working together with Spain to really provide an air shield for Ukraine.

And it is very nice that today famous and talented historian Timothy Snyder became the new ambassador of our charity platform UNITED24. His name is well known in Ukraine. He is one of those who consistently defends the historical truth about Ukrainians and explains to the world why Ukraine is important.

Now that Mr. Snyder has joined the fundraising effort to strengthen our anti-drone defense, he will focus on the Shahed Hunter project.

I am sure that when we together provide Ukraine with reliable protection against this partnership – the Russian and Iranian regimes – it will be one of the strongest pages of our state history.

And one more thing I would like to pay attention to.

These are really striking changes. This shows both the failure of Russian aggression and how strong you and I are when we remain united. Millions of Ukrainian men and women who fight and work for our freedom. And millions of people around the world who help us resist Russian terror. Together we will ensure the defeat of the terrorist state and its punishment for terror. And we guarantee that all of Ukraine is and will be free.

Eternal memory to all those who gave their lives for Ukraine!

Here is former NAVDEVGRU Squadron Leader Chuck Pfarrer’s most recent assessments of the situations in Izium and Kherson:

As you can see from the two assessments of Kherson made twelve hours apart, Ukrainian Special Operations Forces and, most likely, Ukrainian partisans, have been very busy!

Speaking of Putin deflating and trying to manipulate:

In damage control mode after being humiliated by Erdogan and Zelensky, Putin tries to say that Ukraine promised not to attack Russian ships that are raining missles on the country (Ukraine did not promise this at all). pic.twitter.com/NNz3OUZ46X

Anyone who believes Putin’s whiny, self pitying excuse is an idiot. Anti-aircraft defense of the Air Force of Ukraine sends greetings to the occupiers 😁
🇺🇦 Glory to Ukraine!
☠️ Death to enemies! pic.twitter.com/m8bPYphrNE

That pretty much sums it up!

Yesterday we noted that Iran is preparing to ship rockets and missiles to Russia so the latter can use them against Ukraine. Today CNN reports that the US has alleged that the DPRK has been shipping weapons to Russia and actively trying to hide the evidence.

The US is accusing North Korea of secretly supplying Russia with artillery shells for the Ukraine war by concealing where they are being transported to, according to newly declassified intelligence.

US officials believe that the surreptitious North Korean shipments – along with drones and other weaponry that Russia has acquired from Iran – are further evidence that even Moscow’s conventional artillery arsenals have dwindled during eight months of combat. North Korea is trying to hide the shipments by making it appear as if the ammunition is being sent to countries in the Middle East or North Africa, the intelligence says.

The recent intelligence comes about two months after the US intelligence community said that it believed Russia was in the process of buying millions of rockets and artillery shells from North Korea for use on the battlefield, CNN and other outlets reported at the time.

“In September, the (Democratic People’s Republic of Korea) publicly denied that it intended to provide ammunition to Russia,” the National Security Council coordinator for strategic communications John Kirby said in a statement to CNN. “However, our information indicates that the DPRK is covertly supplying Russia’s war in Ukraine with a significant number of artillery shells, while obfuscating the real destination of the arms shipments by trying to make it appear as though they are being sent to countries in the Middle East or North Africa.”

Officials did not provide evidence to support the new allegations. The declassified intelligence also did not provide details about how many weapons are part of the shipments, or how they would be paid for.

“We will continue to monitor whether these shipments are received,” Kirby said, noting that Russia has continued to look to actors like North Korea and Iran to sustain its aggressive war in Ukraine “amid supply shortages and the efficacy of international sanctions.”

As of right now, which is 8:15 PM EDT, there are no new posts on Patron’s official Twitter or TikTok accounts. So here’s some older material:

Patron the Dog is at our service here pic.twitter.com/gjRqikNJWZ

Someone is apparently writing Patron into lyrics!

Yet another bouncing track of Ukrainian wartime music by Yoxden – perfect to boost morale during the war!

You look like cheese
You smell
Full of holes
Ugh!

Here’s a machine translation of the lyrics:

Intro: He is a terrible dream for the orcs

His name is the dog – “Patron”

On February 24, the dog “Patron” surrounded the column orks

We remember, we rejoice…

First verse: At night, the occupiers have a terrible dream (va)

Every day they fly by helicopter to Kherson

Everything is going according to plan in Chornobayivka, everyone is waiting (we are waiting)

Don’t forget tickets and flowers for the Kobzon concert Bridge:

Patron is going for a walk

Patron is going for a walk

ZSU water on your lips with sausage

It’s because you came here with your Ossian sausage

But now, by the way, you remind me of siiir

Because you smell and you have a lot of holes (ph)

Bad news days. Mines blew up many sappers: some died, and some are in hospitals. I’m personally acquainted with several of them. I feel like I'm not doing enough to keep them alive. We need more equipment and armored vehicles… @U24_gov_ua , @TarasChmut , please help me to help pic.twitter.com/pJ33cPfQA5

And we’ll finish with some other music:

You were expecting Mozart?