You are here: Home / Foreign Affairs / War for Ukraine Day 263: Protect the Flag! 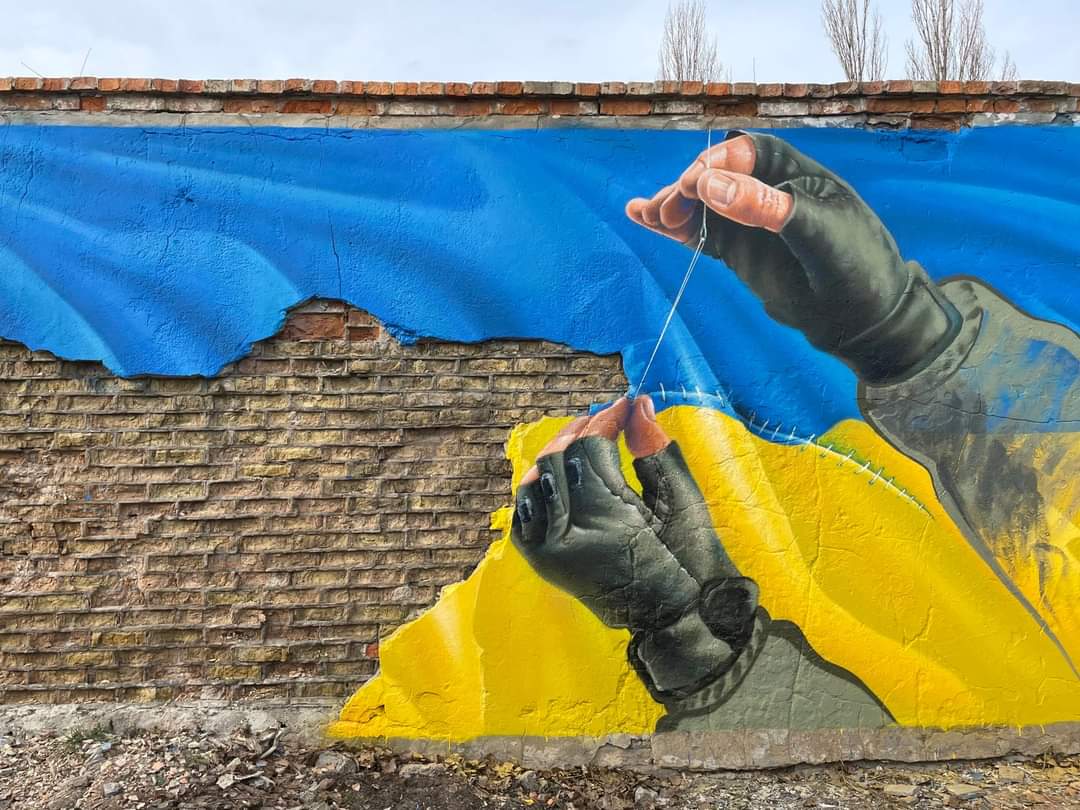 If you were wondering how the Ukrainians in Kherson managed to get their hands on Ukrainian flags so quickly once the Russians retreated it is because they protected their flags!

This is how #Kherson residents hid #Ukrainian flags during the #Russian occupation of the city. pic.twitter.com/cQGglkfSW6

Before we move on, last night Kattails asked if I knew who did the poppy shaped calligraphy I used as the header image on Veterans Day. The artist is Satwinder Sehmi and he did the piece for the 100th anniversary of the end of World War I. Here’s his tweet from 8 NOV 2018:

In Flanders' Fields.. Lest we forget, to commemorate the centenary of Armistice Day. Never forgotten pic.twitter.com/wZXk3VycC9

It is Sunday today. I’m in my office together with our team. The Office is working, Kyiv doesn’t stop, the country works non-stop. Look around – there are always people fighting and working without weekends for the sake of our victory.

Ukrainian energy workers fighting against Iranian drones have no rest.

All our transport workers… truck drivers ensuring both the defense and the rear, Ukrzaliznytsia and all public companies.

Business, which helps. Volunteers we can’t do without. Military enterprises repairing and manufacturing equipment.

Diplomats working almost round the clock for 263 days already… Communication workers, security forces, hundreds and hundreds of other spheres, thousands of organizations and enterprises, millions of people.

All of us already feel the approach of our victory. Because we preserve our unity and know that we are rightfully on our land.

And I thank our commanders, intelligence and everyone involved for working out our next steps. Liberation steps.

Stabilization and restoration of law and order in 226 settlements will be ensured in the Kherson region. This is more than 100,000 local residents as of this time.

We are restoring communication, Internet, television. We are doing everything to restore normal technical capabilities for electricity and water supply as soon as possible.

Of course, the restoration of the work of authorities, the police, some private companies is already beginning. And I thank the business, which is among the first to participate in the return of normal life.

But please do not forget that the situation in the Kherson region is still very dangerous. First of all, there are mines. Unfortunately, one of our sappers died, and four others were injured while clearing mines.

I urge all residents of Kherson to be very careful and immediately inform the rescuers about all dangerous objects.

Detention of Russian soldiers and mercenaries who were left behind in this territory and neutralization of saboteurs are also ongoing.

Investigators have already documented more than 400 Russian war crimes, the bodies of both civilians and military personnel are being found.

In the Kherson region, the Russian army left behind the same atrocities as in other regions of our country, where it was able to enter.

We will find and bring to justice every murderer. Without a doubt.

The fighting in the Donetsk region is as intense as in previous days. The level of Russian attacks is not decreasing. The level of resilience and bravery of our fighters is the highest. We do not allow our defense to be breached.

I thank each of our warriors for this!

As of now, the territory of five of our regions was hit by missile, air and artillery strikes of the occupiers during the day. These are Sumy region, Kharkiv region, Zaporizhzhia region, Luhansk region, and Donetsk region.

We do everything to make the enemy feel our retaliation. To the maximum.

Along the entire frontline, we ensure the destruction of enemy supply chains, ammunition depots, and enemy headquarters.

We have to reduce the potential of the occupiers every day – without days off! It saves the lives of our people.

And we are already very actively preparing for an important week for Ukraine – diplomatic week.

There will be a G20 summit in Indonesia and our position will be presented.

In a very meaningful way. We will give answers to many questions that are being asked now. Public answers. So that they are heard by all our people, all our partners, everyone who supports us.

Already on Tuesday there will be my address.

I am grateful to everyone who endures this marathon!

I am grateful to everyone who fights and works for our country and freedom for all our people!

I am grateful to everyone who helps! 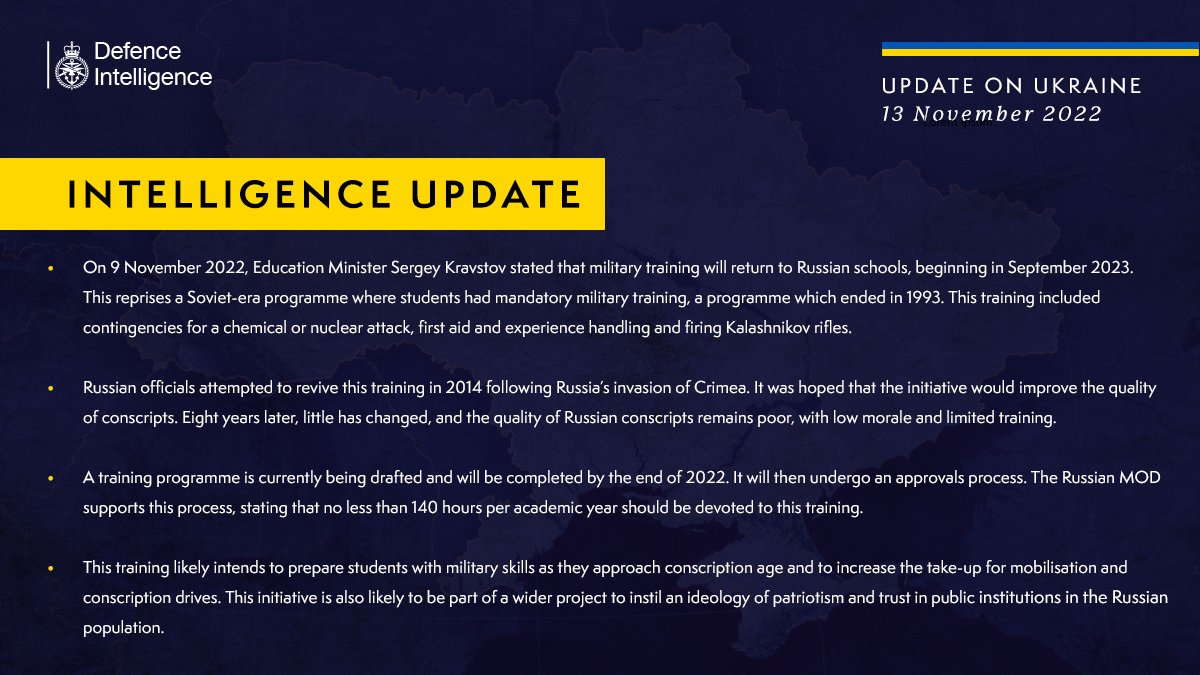 Here is former NAVDEVGRU Squadron Leader Chuck Pfarrer’s most recent assessments of the situations in Kherson, Bakhmut, and Izium:

IZIUM AXIS /1715 UTC 13 NOV/ Despite piecemeal RU attacks along the line of contact, UKR forces have advanced to within 2 Km of the P-66 HWY east of Karmazynivka. UKR Partisans and SOF continue to identify lucrative targets deep in the occupied zone. pic.twitter.com/hjeJKsaQio

Many people asked how Ukrainians in the occupation managed to save the flags. Here's how. They were keeping them cause they *had no doubt* Ukrainian Armed Forces will be back to release them. Our nation is undefeatable pic.twitter.com/KU4sBcErPH

Our report from liberated Kherson. Take some napkins https://t.co/rmvBmU7G3d

Here’s the video with subtitles:

The Economist is reporting that donors are putting together a Marshall Plan for Ukraine to get ahead of the reality that is going to exist once the war ends:

THE FIELD next to Grigoriy Tkachenko’s fish pond is littered with spent 220mm rockets. His carp are dead: the Russian soldiers who occupied his farm in March and April fished for them by tossing grenades into the water. Russian shells blew holes in the farm’s new office and its automated milking stall. Mr Tkachenko reckons his losses at roughly $1m, including 158 cows, about half his herd. “The Russians killed them and ate the parts that were easy to butcher,” he says. “They left the rest to rot.”

Yet by mid-October the farm, in Lukashivka, 120km north of Kyiv, was bustling again. In a vast concrete storage shed, forklifts stacked crates of potatoes while workers supervised machines that use lasers to sort the spuds by size. Most of Mr Tkachenko’s fields were free of mines, his wheat, corn and sunflower crops had been harvested, his grain elevator had been fixed and his remaining cows were chomping away in their pens.

Ukraine, like Mr Tkachenko’s farm, is in a state of buzzing confusion. Ukrainians are scrambling to repair what Russia has broken and to keep the economy running. Steel plants pour white-hot metal to make rebar; restaurants serve food to the noise of air-raid sirens. Yet the destruction Vladimir Putin has wrought is immense. Entire cities are in ruins. Some 8m people, a fifth of the population, have fled the country. Ukraine’s government reckons GDP in 2022 will be 30% lower than in 2021. Counting only the damage done before June 1st, the World Bank estimated the costs of reconstruction at $349bn. Since then the bill has risen: for the past month Russian missiles have been smashing up the power grid.

Recovering from all this, Ukraine’s allies think, will require aid comparable to the Marshall Plan, the huge American programme that kickstarted Europe’s economic recovery from the second world war. Indeed, in some ways rebuilding Ukraine seems harder. Unlike the Marshall Plan, which started years after the war ended, aid to Ukraine is flowing while the shells are still flying. That makes attracting private money almost impossible, for now: foreign investment into Ukraine is barely 1% of its level in 2021. With the war slashing tax revenues and half of the government’s budget devoted to the army, Ukraine needs $3.5-5bn in aid every month just to cover its budget deficit.

Another problem is complexity. The Marshall Plan’s money came from America. In Ukraine aid has come mainly from America, but also from the EU, individual European and Asian countries and an array of multilateral institutions—the World Bank, the IMF, the European Bank for Reconstruction and Development, the European Investment Bank and others. For the war’s first eight months pledges came sporadically. Only now are the main donors planning regular meetings to co-ordinate.

Sceptics of reconstruction aid to Ukraine note that such funds did little good in war-ravaged Afghanistan and Iraq, or in disaster-struck Haiti. Donors in those places failed to help create functional states, and much of their cash was stolen. This is a big worry for Ukraine, long one of Europe’s most corrupt countries.

But Ukraine is not like Afghanistan or Iraq. There, donors were trying to impose a completely new system of government, which many locals resisted. Ukraine is more like post-war Europe, where an injection of funds helped locals rebuild prosperous, industrialised societies that they already knew how to build, because they had built them before war wrecked them. Ukraine was a democratic and fairly sophisticated middle-income country before the war, and making efforts to tackle graft. It seems plausible that Ukrainians can recreate what they had before and, with help, improve on it.

History offers useful lessons. Although the Marshall Plan is now remembered as a success, things were complicated at the time, says Margaret MacMillan, a historian at Oxford. “There were real strains within [the Marshall Plan], real difficulties, moments when it might have collapsed,” she says. There was bitter disagreement within America’s government over how to structure the programme, and within Congress over whether to fund it at all. European governments and voters were suspicious of the conditions attached to the aid. Only the threat of communism persuaded all sides to overcome their qualms. And though the plan was a success in West Germany, its results in some other countries were mediocre. To understand why it is worth trying to help Ukrainians rebuild, it helps to consider how difficult the Marshall Plan actually was.

Much, much, much more at the link!

No new tweet today, but here is a new video from Patron’s official TikTok:

Open Thread (BG Gets the Night Off)
Next Post: (Yet Another) Late Night Schadenfreude Open Thread »