You are here: Home / Archives for MONSTERS

This simple thread throws a cold light on the essential truth of the twitter acquisition, the stupidity of the utter douchebags involved in it, and, I think, why it feels tragic in a way many corporate raids don’t. https://t.co/5yp3m7gwuo

Like most of us, I descend from countless generations of reavers… or, more honestly, people who survived the reavers and their ‘desire for more cows‘. (People who invented that word, long before Firefly.)

Reavers are parasites who think they’re kings, like the Apartheid Princeling Bitchboy here. After all, reaving’s an honorable tradition in his family…

END_OF_DOCUMENT_TOKEN_TO_BE_REPLACED

Love to hang out with my best friends, who will get deported if they ever leave me. https://t.co/D2Nff9ICnY

… but, the Apartheid Princeling Bitchboy is pleased to discover, you can rent them — and at surprisingly reasonable rates!

END_OF_DOCUMENT_TOKEN_TO_BE_REPLACED 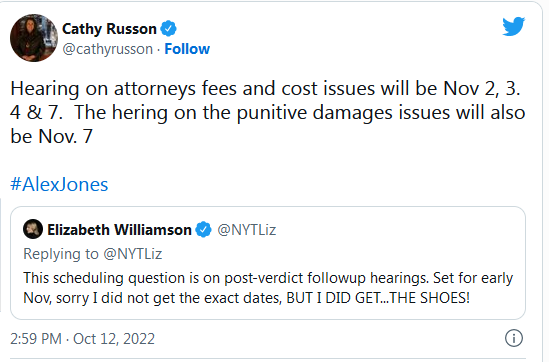 END_OF_DOCUMENT_TOKEN_TO_BE_REPLACED

My only conclusion, after reporting this piece, that Russia's war in Ukraine is being prosecuted by a bunch absolute fucking psychos. https://t.co/eL46xjarbp

… Vladimir Putin described the attacks as retaliation for the explosion that partly demolished his beloved bridge across the Kerch Strait connecting the Crimean peninsula to the Russian mainland. If you look at a map of the area, you realize that Nikita Khrushchev wasn’t, as Putin claims, a dunce and a traitor for making Crimea part of the Ukrainian S.S.R., rather than the Russian S.S.R. It’s a peninsula, and its only connection by land is to Ukraine, not Russia. It’s why Putin sent “volunteers” into eastern Ukraine as soon as he annexed Crimea in March 2014: he needed a land bridge, an easy way to get to this fancy new peninsula he’d stolen from his neighbor, as well as a way of supplying it with water, power, food and all kinds of other vital necessities. Unfortunately for Putin, his forces were stopped at Mariupol by the newly formed Azov Battalion, made up, in part, of far-right Ukrainian nationalists.

Putin had another plan to connect Crimea to the Russian mainland. Less than an hour after announcing the annexation, the Kremlin announced the tender for a state contract to build a bridge across the Kerch Strait, the body of water between Crimea and Russia. Putin gave the $5 billion contract to his childhood judo buddy, Arkady Rotenberg, a man who was such a talented businessman that he became a billionaire in the first decade of Putin’s rule. The bridge, which was supposed to accommodate both car and rail traffic, was a priority for the Kremlin, and unlike every other government project, it was finished ahead of schedule, just in time for Putin’s third reelection, in 2018.

Putin put a lot of stock in that bridge. As a man who thinks often about his historic legacy, he spoke explicitly about how he was able to accomplish a great feat of engineering, of crossing a sea that both Nicholas II and Josef Stalin had attempted, but failed, to conquer.

And so, we can imagine the agony that Putin felt when he discovered, in the early hours of October 8, that his bridge had been engulfed in a massive fireball that completely destroyed one of the two sections that carried automotive traffic, and damaged several kilometers of railway track. It could not have escaped his noticed that whoever had planned the bombing just missed his 70th birthday by a few hours. A report later indicated that the driver of the eighteen-wheeler that allegedly carried the explosives onto the bridge was set to detonate them on the day of the Russian president’s jubilee, but had stopped to take a nap…

END_OF_DOCUMENT_TOKEN_TO_BE_REPLACED

1. Implies he’s fine w China, Russia etc dictating his policies, bc their laws authorize censorship, & those laws must be the will of the people

2. Implies he’ll be OK if US govt censors Twitter

2. You can become incredibly rich & still not know how to think https://t.co/I81WCvRjCv

When Elon Musk was growing up in apartheid-era South Africa, various combinations of ‘but it’s the law’ and ‘will of the people’ were the English-ancestry minority’s go-to explanation to outsiders. The Boers were stone cold bigots, the Not-Whites were impossible, what could an embattled minority of pale-skinned Anglicans be expected to do about the unfairness of it all?…

I thought I might be the only one biased by such memories, but then a whole bunch of twitter feeds pointed out Ben Shapiro’s response to Mr. Musk:

a truth and reconciliation commission for twitter is the funniest thing i’ve read today, bravo pic.twitter.com/6ThYGkKxxB

END_OF_DOCUMENT_TOKEN_TO_BE_REPLACED

This affectless article elevates and validates a sick, racist, homophobic son of a bitch without answering the only questions worth asking, chief among them what made him that way. https://t.co/vIi8Cjd2qp

Christopher Rufo and his family live in a lovely coastal community literally on the other side of the country from the most dangerous of his new-found followers. He will never be abused in person by the bigots and misogynists he gins up, nor will his children attend schools where the curriculum has been dumbed down to pander to those bigots.

And the NYTimes genuinely admires a white dude who can accomplish such a nice lifestyle with no more than a busy internet history and no sense of shame:

Christopher Rufo appears on Fox News so often that he converted a room in his Pacific Northwest house to a television studio, complete with professional lighting, an uplink to Fox in New York and an “On Air” light in the hall so his wife and two children don’t barge in during broadcasts.

“I’ll do ‘Tucker’ and then pop out and have dinner,” Mr. Rufo said recently at his home in Gig Harbor, Wash., thousands of miles from the nation’s media and political capitals.

Mr. Rufo is the conservative activist who probably more than any other person made critical race theory a rallying cry on the right — and who has become, to some on the left, an agitator of intolerance. A senior fellow at the Manhattan Institute, a right-leaning think tank, he has emerged at the front of another explosive cultural clash, one that he sees as even more politically potent and that the left views as just as dangerous: the battle over L.G.B.T.Q. restrictions in schools…

On Friday, Mr. Rufo appeared with Gov. Ron DeSantis of Florida at the signing of a bill known as the Stop W.O.K.E. Act, which bars teaching in workplaces and schools that anyone is inherently biased or privileged because of race or sex. Mr. Rufo, who consulted on the bill, warned Disney that an in-house program it had run that urged discussion of systemic racism was “now illegal in the state of Florida.”

The signing was the culmination of Mr. Rufo’s long campaign to short-circuit corporate and school efforts at diversity and inclusion training. He has acknowledged twisting hot-button racial issues to achieve his aims. “The goal is to have the public read something crazy in the newspaper and immediately think ‘critical race theory,’” he wrote on Twitter last year…

His advocacy has been financially rewarding. Besides his Manhattan Institute position, he has a newsletter with 2,500 paid subscribers, and he runs a nonprofit entity to support his work, which he said had received over $500,000 in donations since late last year…

END_OF_DOCUMENT_TOKEN_TO_BE_REPLACED

In the last two weeks, Tucker Carlson has agreed with the idea that Republicans will eventually be “forced” to pick a fascist leader, has defended the fascists who attacked the Capitol on 1/6, and is now speaking up in support of neo-Nazi ideology. https://t.co/fh3IunJNQO

What Tucker Carlson says here about whites being replaced by the "Third World" lines up with what the New Zealand terrorist wrote in his 2019 manifesto.

Society condemned that document and pushed it off the web. This we feed to millions every night. https://t.co/Ty3ao6Hcfx

Of course, wealthy aristocrats like Carlson don’t lead their own slave patrols; there’s always ‘white trash’ bullies who’ll do the hard work in return for crumbs, plus the chance to feel better than Those People…

I guess he only went with “Hillbilly Elegy” because the book title “My Struggle” was already taken. pic.twitter.com/V7dXWlOPHO