Peak Wingnut Was a Lie!

You are here: Home / Archives for Peak Wingnut Was a Lie!

“why are there nazis and communists arguing on ‘rate my trashcan dot com,’ i just want to talk about eating garbage with my friends.”

Parler, per Wikipedia, is a “microblogging and social networking service launched in August 2018, promoted as an alternative to Twitter and particularly marketed to political conservatives in the United States”. (The article cites “Brad Parscale, Senator Mike Lee, and activist Candace Owens” as prominent early supporters, for what that’s worth.)

As you may have heard, Professional Conservatives are currently Big Mad at Twitter and FaceBook for those companies’ recent half-hearted attempts to staunch the sludge of hate speech, misinformation, and monetized lies. Lo, Mr. Johnson proclaims a Solution!

New: @tedcruz is joining Parler, the social media site that bills itself as an “unbiased” alternative to the likes of Twitter and Facebook, the latest GOP official to do so https://t.co/7fFSKoCiAK

… I have to admit: The Parler site itself is well-designed and organized. It obviously takes many cues from Twitter in terms of features and layout, but it’s got some of its own bells and whistles, such as the ability to tip other users’ posts with influence points, which you must buy with a credit card. You can also vote up posts and “echo” them by hitting a little megaphone icon…

Of course, if Parler has your credit card info, it can sell your data, just like those other evil apps! And because I am an elderly cynic, when a company offers a chance for its marks to send money to their faves, I immediately wondered about the percentage of outright grifters among its users…

END_OF_DOCUMENT_TOKEN_TO_BE_REPLACED

The AP is reporting another US drone strike in Iraq:

Another airstrike almost exactly 24 hours after the one that killed Soleimani hit two cars carrying Iran-backed militia north of Baghdad, killing five people, an Iraqi official said. He spoke on condition of anonymity because he was not authorized to talk to reporters. The Iran-backed Popular Mobilization Forces confirmed the strike, saying it targeted one of its medical convoys near the stadium in Taji, north of Baghdad. The group denied any of its top leaders were killed.

I hope that every American in Iraq is taking really good care of their personal security; they are all targets now.

And I really hope against hope that the millions of Iraqis and Iranians in the crossfire don’t get further grief added to the tally of misery they’ve experienced for decades now. 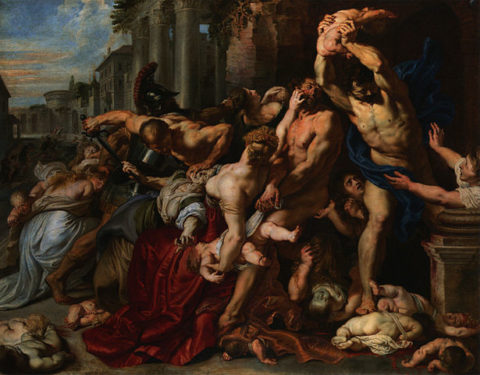 And finally, I’ll note that war when pursued by sober and prudent leaders, who define their goals, identify strategy and tactics that can plausibly lead to those ends, and enact an ongoing process that can deal with what happens when any plan makes contact with the opposition is still a wasteful, tragic, destructive and always contingent and hugely risky proposition.

And then there is the GOP, and the whole feckless troupe of Trumpanzees.

Here’s a John Prine song that seems way too on point today:

Image: Peter Paul Rubens, Massacre of the Innocents, between 1611 and 1612

END_OF_DOCUMENT_TOKEN_TO_BE_REPLACED

"The Times bent over so far backwards to show that it was not liberal, it fell over." https://t.co/wOD3S00c3t

Some people say that the suits in charge of the NYTimes were not hard to persuade, of course. Todd Gitlin’s is an excellent autopsy, regardless:

Readers of the New York Times’s op-ed page October 9 were accordingly drawn to an enticing headline: “What Hunter Biden Did Was Legal — And That’s the Problem.”

The author, Peter Schweizer, began promisingly by noting an asymmetry in American law. Under the Foreign Corrupt Practices Act—a product of the reformist ’70s—the children of foreign officials are prohibited from holding positions in American-run companies. But no equivalent law bars foreign companies and governments from hiring family members of American officials.

There followed five paragraphs about father Joe and son Hunter Biden, centering on Hunter’s business arrangements in Ukraine and China. No evidence has surfaced of any intervention from Joe in those arrangements. But because of the family connection between the then-vice president and his feckless, business-unqualified son, the author, along with Fox News and virtually every Republican official, considered financial payments to Hunter corrupt…

Meanwhile, Ivanka and Jared Kushner between them reported 2018 income in the range of $29 million to $135 million. How much came from licensing and other financial arrangements abroad is not clear, but the New York Times’s Jesse Drucker and Agustin Armendariz noted that “Ms. Trump earned just under $4 million from the Trump International Hotel in Washington, which has become a magnet for visiting executives and foreign officials with interests before the federal government.” But Trump family hustles are dogs biting men—they’re not “a story” because there are so many.

So it was not altogether surprising that in Schweizer’s 1,186 words about corrupt family arrangements with foreign nations, the name “Trump” appeared exactly once: strictly to introduce the family of Elaine Chao, the Secretary of Transportation in Trump’s cabinet…

END_OF_DOCUMENT_TOKEN_TO_BE_REPLACED

David Clarke, Scott Walker and the Overstock-dot-com guy all Crocodile-Dundee-headwalking across caged asylum seekers, desperate to profess their love before she leaves. https://t.co/hVKEnMbrJw

… The Russian national, who pleaded guilty late last year to conspiring to act as a clandestine foreign agent, was released Friday into the custody of U.S. Immigration and Customs Enforcement.

Now she’s expected to be deported quickly back to Russia.

Her release closes a fraught chapter for Butina, who for months occupied a spotlight in the federal investigation into Russian interference in the 2016 election. Prosecutors accused Butina of scheming to forge a connection between Moscow and the Trump administration, as well as several heavy hitters in the conservative political community — including officials at the National Rifle Association and the National Prayer Breakfast…

She served a ridiculously long sentence essentially for not filing the right paperwork. But now she is free. Sadly, she was jailed to satiate the rampant Russophobia in the US these days. We are better than this.https://t.co/ZNkKfD9wnP

END_OF_DOCUMENT_TOKEN_TO_BE_REPLACED

“It was an offer she could, in fact, refuse.”

Ben Shapiro is a professional Wingnut Wurlitzer pest who’s spent the past year whining that Alexandria Ocasio-Cortez won’t pay him any attention. Of course he never actually intended to ‘debate’ her, but his donors have generously supported his ongoing public grievance.

Guess Tulsi figures that her higher media profile gives her the ‘right’ to ‘challenge’ the OG wingnut boogey-woman her own self. Let’s see how much she scams on this new dogwhistle!

Hey all, @kaikahele is running in the primary against Tulsi for her congressional seat. If you’d like to support him, today is a good day to do so. And you can do so ?? https://t.co/dFtbttVUVX

END_OF_DOCUMENT_TOKEN_TO_BE_REPLACED

"Hi Meghan, it's Tim down at Chili's. Yep, he's here again. Um, two Fuzzy Navels and some loaded potato skins. Yeah, I've got his keys, but I'm afraid we're going to have to ban him this time." pic.twitter.com/CeUeOKjQ9B

Admitted plagiarist and general internet nuisance Ben Domenech is the founder, editor, and biggest booster of a left-twitter punching bag known as The Federalist. Since I am not the only person who thinks of The Federalist as a kind of wingnut-wurlitzer sink trap, watching its public face throw a nutty on twitter is always mildly entertaining…

it is very funny that the publisher of the federalist described this standard news story about a media organization as "doxxing" https://t.co/rmXhMxLXG3

… The path of conservative media has largely mirrored the challenges of digital and print news operations broadly over the last decade, with wild experimentation in form and content, waves of consolidation, and a series of high-profile collapses…

And others have adapted to [Trump’s] rise and his style. The Daily Caller went populist, amplifying Trump’s anti-immigrant politics. Ben Shapiro’s Daily Wire remained skeptical of the president but drew a huge following “owning” his liberal enemies. The Federalist followed a version of this second path.

The site launched in 2013. In a post introducing the outlet, publisher Ben Domenech compared its mission to that of the original Time magazine, which “aimed to cover and distill the news of politics, economics, world affairs, and culture for the nation’s rising middle class.” The site published a wide-ranging group of writers on a variety of political and cultural topics. Over the years, it has adapted to the Trump moment by criticizing perceived excesses of his detractors in the media and relentlessly questioning the Russia investigation.

Unlike some peers and more like Breitbart, which only revealed its ownership structure under pressure from a committee from which it was seeking congressional press credentials, the Federalist has been resolutely opaque about its finances. The site is owned by a private company and doesn’t have to disclose its ownership or funding structure; its parent company, FDRLST Media, was incorporated as a limited liability company in Delaware in 2016. And the omertà on the topic has prompted a considerable amount of speculation in the political media world, with the phrase “Who funds the Federalist?” becoming a recurring meme, often tweeted at the site’s top brass. The Federalist has winked at the controversy, selling at one point an “I Fund the Federalist” T-shirt.

Despite the air of mystery, publicly available information does shed some light on some of the Federalist’s financials, though it’s not necessarily the full picture — or anything that explains why the secret has been so closely guarded…

I personally assume Ben’s mother-in-law Cindy McCain is using her personal $200 million fortune to keep Domenech busy and out of her basement, because hell, given the option, wouldn’t you?

END_OF_DOCUMENT_TOKEN_TO_BE_REPLACED

I went to the park to do some reading today. On the way there, I passed by some folks having a normal and good one, throwing us a MAGA rally across the street from Trump Tower. House left we have a sign that calls for the imprisonment of Hillary Clinton. You can’t see it, but the next MAGA hat over was wearing a shirt that said, “Hillary Lost, Ha Ha Ha.” They seemed to think mentioning the loser of the 2016 election was better than mentioning the winner. 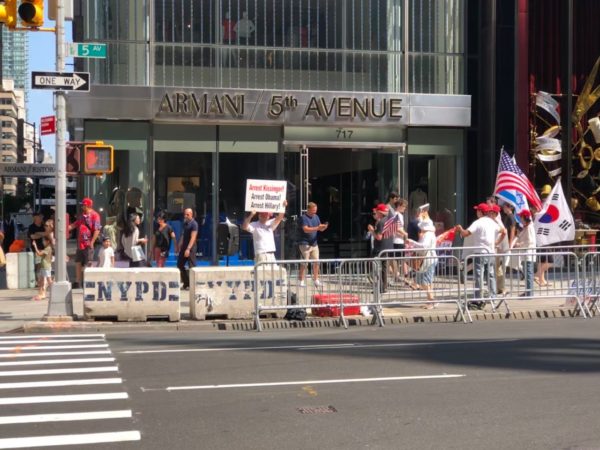 You might notice, on the far right, the flags of Israel and South Korea. They were also chanting “We love Israel!” as I walked past. In other words, it was as coherent as any other right-wing rally I’ve ever seen. Sad!

I’m kind of surprised they used the correct Korean flag. At any rate, I soon moved on to better views. 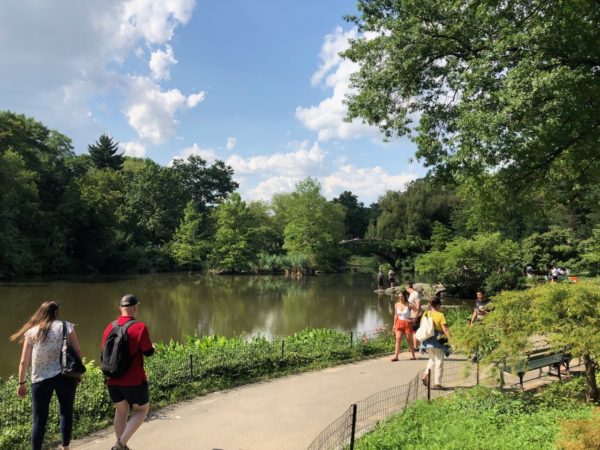 How are the dregs of the weekend treating you? I did my writing this morning, so now I’m playing Kerbal Space Program. I bought the new expansion and started a new career mode game; I’m trying to make it to (and, the tricky part, from) the Mün.