Stop and watch this video.

Whatever you thought about the governors' stunt… it turns out it was worse.pic.twitter.com/GASpsChOzl

*link to the tweetcames from Patrick II

END_OF_DOCUMENT_TOKEN_TO_BE_REPLACED

If the people who are subpoenaed do not comply, you send them to fucking jail:

The select committee investigating the Jan. 6 Capitol riot threatened on Friday to pursue criminal charges against Stephen K. Bannon, the former chief strategist to President Donald J. Trump, for refusing to comply with its subpoena, announcing it would consider initiating criminal contempt of Congress proceedings.

In a statement after Mr. Bannon informed the panel that he would not cooperate in the inquiry, the panel’s leaders said they would “swiftly consider” the contempt referral, raising the prospect of what could be a prolonged legal battle over what could be crucial evidence in the investigation.

The committee has ordered four former Trump administration officials — Mr. Bannon; Mark Meadows, the White House chief of staff; Dan Scavino Jr., a deputy chief of staff and Kash Patel, a Pentagon chief of staff — to sit for depositions and furnish documents and other materials relevant to its investigation.

It’s not like it is without precedent- google Susan McDougal. Republicans loved it then.

END_OF_DOCUMENT_TOKEN_TO_BE_REPLACED

A need has been expressed for more general threads on Sunday morning. And the Atlantic obliges with subject matter. I haven’t read it yet, but some of the commentary is hilarious.

But of course it’s no laughing matter how Barr contributed to the destruction TFG wrought, even if now he assures us he was keeping him from worse. Wink, wink.

It’s the requisite apology tour before Barr takes up his post at the Heritage Foundation or whatever democracy-undermining place he winds up at.

And this is your Sunday morning political and whatever that’s not garden open thread.

END_OF_DOCUMENT_TOKEN_TO_BE_REPLACED

Ronald Brownstein has a good article about concerns that I am beginning to have, although I look at things a bit differently.

Anxiety is growing among a broad range of civil-rights, democracy-reform, and liberal groups over whether Democrats are responding with enough urgency to the accelerating Republican efforts to both suppress voting and potentially overturn future Democratic election victories.

The Republican efforts are concentrated in a number of states: Wisconsin, Arizona, Georgia, and several others. Here in New Mexico, we are happily moving into a future somewhat like what most jackals would want. I can’t yell at my legislators, because they are doing things mostly right.

So I will yell at the jackals in those red states: What are y’all doing to stop the descent into one-party rule? What is anyone doing? From the news, it looks like we are obedient sheep marching into the Gaetz-ification of the United States. But the news doesn’t present the full story. I know there are lawsuits in progress, for example.

Brownstein focuses on President Joe Biden and Congress, which is fair enough, but action should be going on in those red states. Are voters being registered? Are there protests outside the unconstitutional doings in state legislatures? Letters to the editor? We’ve got to go public with the news that the Republicans are destroying democracy. And keep saying it over and over again.

What are you seeing in your state? What are you doing? Can you use some help from out of state, because it’s driving me kind of frantic I can’t do something about it. Let’s focus on that, not on our favorite Democratic punching bags, unless you’re in their state and doing something about them.

END_OF_DOCUMENT_TOKEN_TO_BE_REPLACED

Representative Matt Gaetz, Republican of Florida and a close ally of former President Donald J. Trump, is being investigated by the Justice Department over whether he had a sexual relationship with a 17-year-old and paid for her to travel with him, according to three people briefed on the matter.

Investigators are examining whether Mr. Gaetz violated federal sex trafficking laws, the people said. A variety of federal statutes make it illegal to induce someone under 18 to travel over state lines to engage in sex in exchange for money or something of value. The Justice Department regularly prosecutes such cases, and offenders often receive severe sentences.

It was not clear how Mr. Gaetz met the girl, believed to be 17 at the time of encounters about two years ago that investigators are scrutinizing, according to two of the people.

That certainly puts these rumors this morning in a new light:

Hrmm. Maybe Gym Jordan can help him out.

END_OF_DOCUMENT_TOKEN_TO_BE_REPLACED

The first confirmed COVID-19 death on US soil occurred on March 1, 2020.   four p.m. EDT on April 2, 2020,  the United States’ cumulative coronavirus death toll hit 5,808.  Four days later, that number crossed the 10,000 line. There’s a long history behind the saying that while any one death is a tragedy many deaths —a thousand, a hundred thousand, a million— become statistics, but it certainly applies now:  the American pandemic has entered its statistical phase. 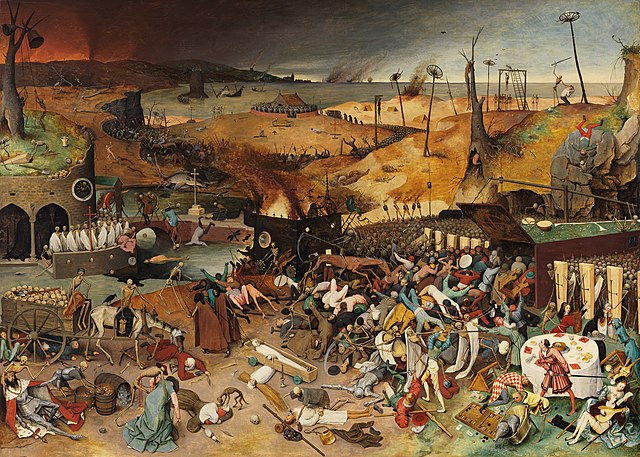 This much is known about the tragic start to America’s  epidemic.  The first person to die  was a man in his fifties, who had been hosptialized in King County, Washington.  His name was not been released at the time, but it’s possible to reconstruct a part of his story: he was someone in the middle of a life who, only a week or two before its end, had no reason to think he faced his last days on earth. That’s a story we can tell ourselves; a loss we can recognize; a human being, however anonymous, we can mourn.

That one death is a marker in more than just timing.  Health officials noted one key fact about that particular case.  The dead man had no connection to the original coronavirus outbreak in China. He caught his disease here, from someone else in the United States who was already infected, in what is called “community transmission.” President Trump reacted to the news of his death within hours—by imposing travel restrictions on Iran.  That gesture was preceded by reckless inattention, to be followed by a disastrous series of performative decisions by the Trump administration that has produced the current best-case scenario of 100,000 to 240,000 Americans dead by summer.

It’s virtually impossible to grasp the losses implicit in such large numbers. When quantities break the bounds of ordinary experience they begin to disappear from view.  That’s the challenge: to see into what’s happening now, to extract from mere numbers both memory and meaning.

Another: between 1956, when the first American died in the conflict, and 2006, when the last American fatality attributed to the war was recorded—half a century–58,220 members of the US armed services died in the Vietnam War. COVID-19 has climbed to ten percent of that casualty count in a single month.

Looking forward, if the most optimistic current projections hold, coronavirus will bring between thirty and seventy 9/11s to the United States, or two to six Vietnams.  At those heights, the sheer scale of the misery again turns particular memories (where I was when the towers fell, what it felt like to run my fingers along the wall) into abstractions.

And beyond such numbers, should the best case scenarios fail to pan out, we’ll find ourselves in territory at the limits of national mourning. It took 405,000 American lives to defeat Nazi Germany and Imperial Japan.  And should the US epidemic wholly overwhelms the still-patchwork effort to contain it, the only remaining national memory to measure our tragedy against will be America’s bloodiest conflict, the Civil War, in which an estimated 750,000 Americans lost their lives.

Back on the first of March, just one man lay dying of this awkwardly named new disease. Those who knew him could mourn him in his human singularity. Glimpsed now, through the lens of almost six thousand more dead, he is the unknown soldier in this viral campaign.

Image: Pieter Breughel the Elder, The Triumph of Death, c. 1562

END_OF_DOCUMENT_TOKEN_TO_BE_REPLACED

The chairman of the Senate Intelligence Committee warned a small group of well-connected constituents three weeks ago to prepare for dire economic and societal effects of the coronavirus, according to a secret recording obtained by NPR.

The remarks from U.S. Sen. Richard Burr were more stark than any he had delivered in more public forums.

On Feb. 27, when the United States had 15 confirmed cases of COVID-19, President Trump was tamping down fears and suggesting that the virus could be seasonal.

“It’s going to disappear. One day, it’s like a miracle. It will disappear,” the president said then, before adding, “it could get worse before it gets better. It could maybe go away. We’ll see what happens.”

“There’s one thing that I can tell you about this: It is much more aggressive in its transmission than anything that we have seen in recent history,” he said, according to a secret recording of the remarks obtained by NPR. “It is probably more akin to the 1918 pandemic.”

But wait, it gets better:

Soon after he offered public assurances that the government was ready to battle the coronavirus, the powerful chairman of the Senate Intelligence Committee, Richard Burr, sold off a significant percentage of his stocks, unloading between $582,029 and $1.56 million of his holdings on Feb. 13 in 29 separate transactions.

As the head of the intelligence committee, Burr, a North Carolina Republican, has access to the government’s most highly classified information about threats to America’s security. His committee was receiving daily coronavirus briefings around this time, according to a Reuters story.

A week after Burr’s sales, the stock market began a sharp decline and has lost about 30% since.

On Thursday, Burr came under fire after NPR obtained a secret recording from Feb. 27, in which the lawmaker gave a VIP group at an exclusive social club a much more dire preview of the economic impact of the coronavirus than what he had told the public.

These people are traitors.