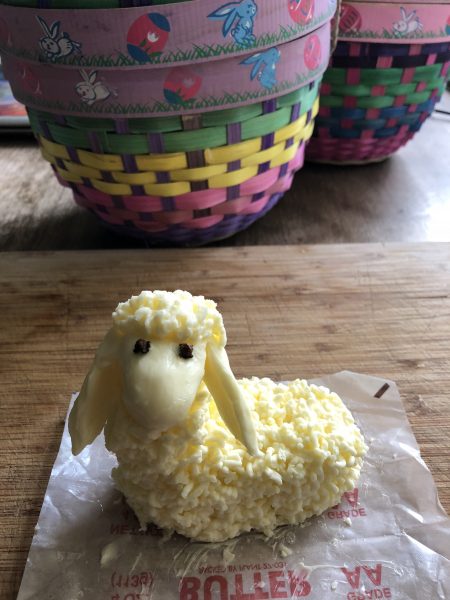 Here’s the shorn beast, before I used the garlic press to make the curlicues: 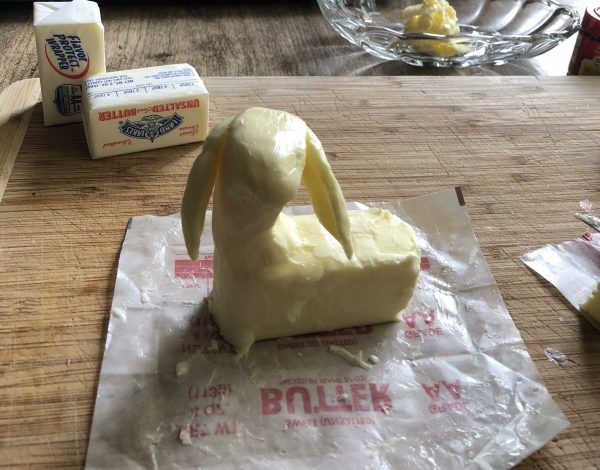 And here are the tools of the trade: 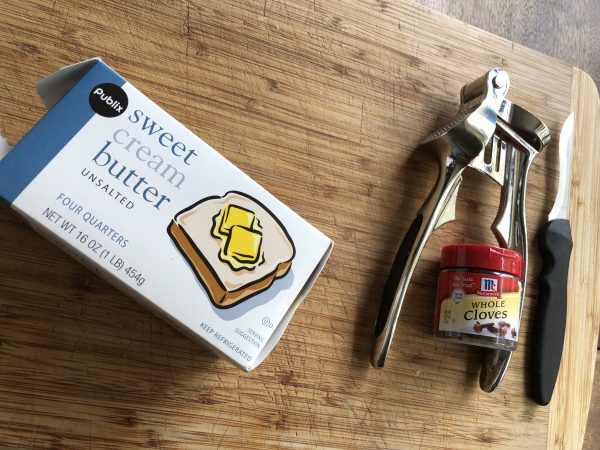 I think 2016 butter lamb was better. But it was a more innocent time.

END_OF_DOCUMENT_TOKEN_TO_BE_REPLACED

It’s that date on which professions of faith and the actual practice of that faith are the farthest apart.

All vernal equinox festivals tend to celebrate the new, the young, and the throwing off of outworn properties to make way for fresh growth — things bound to raise hives on conservative hides at the best of times. But to those rightwingers raised in the Christian tradition, where Easter is (believe it or not!) the most sacred Holy Day, it’s gotta be especially irksome. Scripture preaches that the literal embodiment of the One True Father God allowed himself to be captured, manhandled, and murdered by the government. Bad enough that the totally-within-their-rights civil authorities and their licensed security thugs should be cast as being on the wrong side… however can they reconcile this “Prince of Peace” pussified Jesus with the Flaming Sword Wrongness Punisher of their hearts’ desire?

(Of course, my own understanding here was strongly influenced by parochial school nuns who put a lot of stress on the deliberate pacifism of Easter Week, for reasons. In 1968/72, explaining to a bunch of sullen teenagers who considered their NORAID donor buttons the height of political correctness that St. Peter deserved to be rebuked for whipping out his sword at Gethsemane can’t have been easy.)

Modern pop culture isn’t easy for our ‘conservative’ opposites to enjoy, either — every time they think they’ve found a good violent shoot-em-up to applaud, mouthy Lie-brals start pointing out how ‘oppressed young special-needs minority types’ are shown more sympathetically than ‘the duly appointed legal authorities’. But ya gotta give them points for trying!…

"It’s worth remembering that Hogwarts, as an entity, was armed to the freaking teeth." https://t.co/S3rPXyt0MK via @HeatherWilhelm pic.twitter.com/Bmna8i3fvQ

but like, they didn't win because they were armed? They won because the main guy literally let the evil wizard kill him?

I'm not sure you guys have thought this through.

It's also worth remembering that the kids spend seven years learning how to use the wands responsibly. Furthermore are prohibited from using them outside of school.

However, if we've fallen into this dystopian fantasy where we need to train child soldiers we've got other problems.

Watching the right wing folks learn the hard way that they were never good at social media.

It was just the pre-election army of bots and trolls that made it seem that way.

END_OF_DOCUMENT_TOKEN_TO_BE_REPLACED

I really, really hope that people are watching how the Parkland kids are just shredding the gun nuts and the right wing extremists, because it really is an object lesson in how to get things done. Again, it’s a long battle, and very little has changed legally, but laws always follow public attitudes.

At any rate, their recipe for success is simple, but most of all what they are doing is throwing out the old rules. In the old way of doing things, liberals put forward a watered down version of their agenda, and signal they are willing to compromise before the game even starts- “we can all agree on common sense gun laws.” And then we learn, that no, we can’t all agree on common sense gun laws, and they take the weak opening position and push back against it. Then we get distracted, bullied, and allow them to muddy the waters with discussions over clips v. magazine and other gunhumper bullshit, all wrapped around the axle because we let them set the terms of the debate.

Not these kids. They have clear messages that haven’t been muddied by technocratic bullshit- “My friends got shot and there are too many fucking guns and we’re going to do something about it and we’re going to go after people who won’t.” The end result, obviously, is legislation, but these kids are not pushing specific laws- they’ll let legislators do that.

And it is working. A clear message, the moral high ground, and inclusive approach, and most importantly, not taking any shit. Someone throws bullshit at them, they turn it back around and amplify it on their target. See also, Laura Ingraham. And when they get minor victories, like the weak laws that passed in Florida, they don’t celebrate, they nod and get back to going after the motherfuckers who keep putting guns on the street.

It’s a goddamned breath of fresh air. I don’t know if it is because they are young and fearless, because they are smart and social media savvy, if it’s because they have great parents and teachers, or if because being shot at brings one a clarity of purpose, but it’s probably all of the above. We all could learn something from these kids, because the NRA and the frothing wingnuts sure are- the old rules don’t fucking apply any more.

END_OF_DOCUMENT_TOKEN_TO_BE_REPLACED

Hard politicals times are an inspiration for gifted political cartoonists…

END_OF_DOCUMENT_TOKEN_TO_BE_REPLACED

This is my shocked face:

Freddie Deboer's Race Science Book is being published by the guy who printed The Bell Curve. pic.twitter.com/a0TEfhXu0a

In the interest of compete fairness, All Points Books purports to publish an “ideologically eclectic mix of titles”, but in the article I link the two “liberal” books are ones by a guy at Reason and a No Labels type Democrat. The biggest hit for All Points was a book by Laura Ingraham.

I regret every having that guy post here, but I feel good about this

.@eliasisquith Freddie will be at the Daily Caller within five years.

END_OF_DOCUMENT_TOKEN_TO_BE_REPLACED

At the Korean Bamboo.

As of pre-dawn, commentors Yutsano, Mike J, Bumpers, CaseyL and HEWolf plan to be there… also no doubt one or two I’ve missed.

And if you’re at the party — remember to take a photo or three, to share with those of us who aren’t so fortunate!

END_OF_DOCUMENT_TOKEN_TO_BE_REPLACED 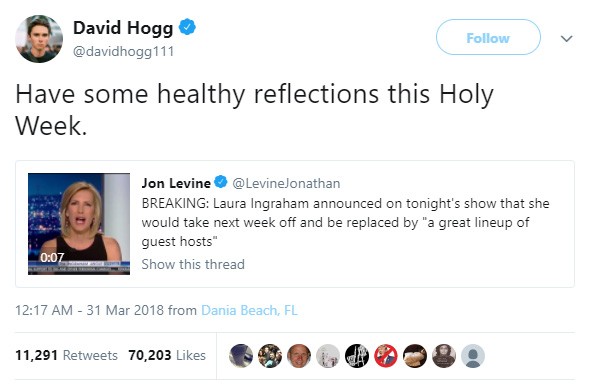 My favorite thing about these kids is how they take all the rightwing bullshit and throw it right back at them.