You are here: Home / Archives for TV & Movies / Television

Tonight, we address the hot topic at the CBS watercooler. #LSSC pic.twitter.com/hiW3BBKV28

Tucker Carlson’s best bud, who should take some time away from *all* media, for their own good:

Glenn should count his blessings. Putin could have sent him to the Front. https://t.co/R3uD4rnwd1

it's weird all kinds of ppl who insist they don't support Russia's invasion of Ukraine, get very triggered at the suggestion that Russia is losing.

Area Substacker is QUITE LITERALLY calling bombing "two regions of Eastern Ukraine" against their will as "ensuring the[ir] independence."

Usually he hides his outright propaganda more subtly than this. https://t.co/OZxKmzkTeE

Hammer of the Glenn…

This is a general fact. I don't think nearly as many people are being paid to say stupid things as one might think. They just have a hammer, and they want to use that hammer. https://t.co/wgBAbl3vxP

They'll use people and ditch them almost instantly because they just want to hammer. It's not that they have no lodestar, it's that they have one lodestar — or in many cases, an anti-lodestar — and from it they cannot deviate.

END_OF_DOCUMENT_TOKEN_TO_BE_REPLACED

As someone who loved “Julie & Julia” but could have done with more of the latter and less of the former, I’m gonna watch the shit outta this HBO Max series:

Leave it to the enormously talented Sarah Lancashire to tackle an iconic role defined by the incomparable Meryl Streep without a hint of fear. Looking forward to David Hyde Pierce as Mr. Child too.

PS: If you have HBO Max, “Somebody Somewhere” is an underrated gem, IMO. It is set in Manhattan, Kansas. I keep looking for Albatrossity’s birds!

END_OF_DOCUMENT_TOKEN_TO_BE_REPLACED

Jeff Zucker, “as much as any person in the world,” rehabilitated an overleveraged, serially bankrupt, third-tier New York real-estate developer into a worldwide celebrity and political icon. Another good one from @Sulliview. https://t.co/vqteCuyH4F

… The through line? Nothing nobler than TV ratings, which always were Zucker’s guiding light, his be-all and end-all and, ultimately, his fatal flaw.

Two decades ago, as an NBC executive searching for a way to goose the floundering network’s popularity, he gave the green light to a reality show, “The Apprentice,” featuring a flashy mogul whose soon-to-be-famous tagline was “You’re fired.” Trump had a checkered history of bankruptcies, racism and failed real estate projects, but his confident bluster made him a natural on television…

Zucker created Trump the TV sensation, which was the necessary foundation for Trump the candidate. Years later, after moving from NBC to CNN, Zucker recollected very well that Trump was a self-proclaimed “ratings machine” — a rare instance of Trumpian truth-telling.

CNN infamously took his campaign speeches live, sometimes going so far as to broadcast images of an empty lectern with embarrassing chyrons such as “Breaking News: Standing By for Trump to Speak.” You can’t buy that kind of media…

… I’ll note that CNN recently has done important work, including specials about the Jan. 6 insurrection and a new “Democracy in Peril” show in the 9 p.m. slot recently occupied by Chris Cuomo.

But why is American democracy in peril? Some portion of the blame — not a tiny portion — belongs to the network executive who couldn’t resist the “ratings machine.”

what is wrong with these people https://t.co/LqxKwCPQva

if my boss had overseen a fairly steep decline in company performance but never had anything bad to say about me or the job i was doing, i would also "raise concerns" about him being forced to resign. https://t.co/gsEoAVa5bc

How damaging is the dirt that CNN's probe uncovered? So bad, Jeff Zucker resigned before he could be fired "and is not poised to receive any severance," @TatianaSiegel27 reports. https://t.co/cv9SUr7q8y

Her job before that? Gov. Andrew Cuomo's comms director.

This article suggests their relationship is why CNN protected the Cuomos for so long.https://t.co/I7T1Ryp4SM

UPDATE: "[T]he timeline on Jeff Zucker and Allison Gollust’s coupledom is not only off by more than two decades, say sources who have worked with the pair — the CNN power couple also repeatedly lied about their relationship to their corporate bosses"https://t.co/E5qLCdSYHf

END_OF_DOCUMENT_TOKEN_TO_BE_REPLACED

I know this conversation is going to be very 2008, but I think I am finally to the point that I am just letting my cable channel subscription go. I don’t recall the last time I ever watched anything, it brings me no joy, I don’t watch any sports other than the Pens, and I just can not justify the expense. I’m getting closer to retirement age and 100 more bucks in the bank every month seems smarter.

My netflix, hulu, and prime queues already are large than I could ever possibly finish, so why do I keep funding right wing extremist networks?

END_OF_DOCUMENT_TOKEN_TO_BE_REPLACED

Has there ever been a brand that was more effectively destroyed than the Sunday Morning shows? In the 90’s and early 2000’s, I would wake up every morning and watch them. Even in college, it did not matter how hungover I was, I would not miss Meet the Press. But now, I honestly do not even know who is hosting what other than that execrable Chuck Todd (who was so wonderful running numbers in 2007-2008 and then just became a complete stooge when it came to actual politics). They’re just a non-entity. They shape no agenda, they make no news, it’s just a bunch of liars on able to spew nonsense without even being corrected or remotely challenged. What’s the point? Also, I dearly miss Charles Kuralt and Charles Osgood.

On a related note, say what you will about Chris Matthews, but to his credit he has fucked off into non-existence. No comeback attempts or any bullshit like Marky Mark or the other undesirables. He’s just a non-entity and off living his best life. Good for him. And good riddance.

END_OF_DOCUMENT_TOKEN_TO_BE_REPLACED

I’m on episode 44 of Dirillis: Ertugrul (Resurrection: Ertugrul) and I am completely sucked in and have been since the first couple episodes. So much so that even when I learned there were 76 episodes in the first season, I kept watching. It’s based on the story of Ertegrul Bey, a turk who fathered Osman (which I assume will happen in Season 5 the way this show is paced).

The thing is, it is just shameless propaganda and basically a fictional rewrite of Ottoman History. I’m sure Erdogan loves it. It’s one part Game of Thrones, one part Triumph of the Will, and one part Dallas. And I can not get enough of it.

The fights are laughable, with every sword fight more and more absurd, and the important characters never getting hurt. Historical gender roles are strictly enforced, the Beys and Muslim scholars fawned over, and so on. As far as propaganda goes, it is a masterpiece.

The only show i have seen recently this over the top was a Russian state movie from 2018 called T-34. Do you have any other shows you have watched like this? Shows you know are just propaganda, but you watch them anyway?

END_OF_DOCUMENT_TOKEN_TO_BE_REPLACED

With He Who Shall Not Be Named’s malign influence fading, I’m seeing more wholesome content on my Twitter timeline:

I don’t want to oversell William Shatner’s performance of Rocket Man, but it may be the greatest thing that ever fucking happened.

Speaking of Shatner, at the University of Florida in the late 1980s, there used to be a T.J. Hooker Viewing Society. 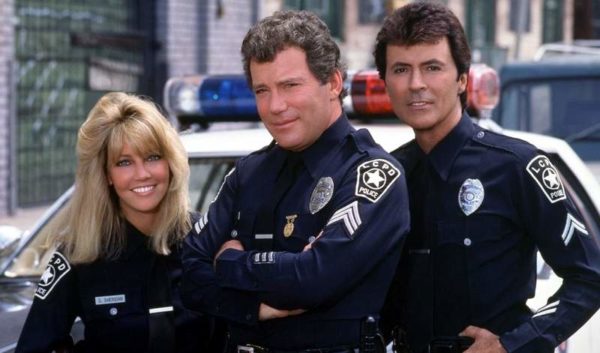 Also speaking of Shatner, I read a story once that alleged that the young actor who played Wesley Crusher on Star Trek TNG approached Shatner (who was doing a flashback cameo or something) for an autograph and was rudely rebuffed. The kid told a castmate — maybe even Jean Luc himself — who said something like, “Oh, did no one tell you Bill is an asshole? Bill’s an asshole! Sorry about that,” and then went to the producer or whomever to make Shatner give the kid an autograph. No idea if it’s true, but I want it to be so!