So the President fielded the questions himself in today’s White House press briefing, and FOX’s Ed Henry couldn’t help himself, earning this:

“Ed, just from a political perspective, do you think the President of the United States, going into reelection, wants gas prices to go up even higher? … Is there anybody here who thinks that makes a lot of sense?”

It was nice of President Obama to relieve Ed of his burdensome lunch money and then get Ed a milkshake from the White House kitchen, and then drink it all up like that. I wonder what FOX Nation will sa…oh hey. Pre-emptive Uppity.

Why Did Pres. Obama Hold His First Press Conference in Three Months on Super Tuesday?

It’s like they knew Ed Henry was going to be a douchebucket beforehand.

END_OF_DOCUMENT_TOKEN_TO_BE_REPLACED

Gillard became PM in June 2010 after winning a similar vote of the parliamentary members of the ruling Labor Party, deposing then PM Kevin Rudd. It’s been downhill without any brakes ever since.

Gillard’s party failed to win a majority of seats in the House of Representatives in the 2010 election. Afterwards, she was reappointed as Prime Minister only after winning the support of a motley crew of independents and a Greens member who, together, held the balance of power.

Gillard appears desperately unpopular with the Australian public. Labor is polling below 35% nationally in opinion polls, with Gillard’s personal popularity nudging against the Crazification Factor, despite a steadily growing economy, some significant policy wins (like a new carbon tax) and the fact that the leader of the opposition Liberal (conservative) party, Tony Abbott, is a hatchet-faced wowser best known for being photographed far too often wearing only budgie-smugglers.

I suspect this is because Gillard has yet to show that she is in possession of a spine or any particular left wing ideals other than holding onto power.

Today’s vote is unlikely to resolve anything in the long term. Gillard will continue to be seen as a weak leader. Rudd will return to the backbench until the next, inevitable challenge, and Abbott (a man who makes Joe Lieberman look warm and fuzzy) will continue to await the downfall of a government with no particular direction and no particular hope of survival.

Isn’t it nice to know that our allies are almost as fucked up as we are?

Update: Gillard wins with 72-29, one vote better than most predictions.

END_OF_DOCUMENT_TOKEN_TO_BE_REPLACED

Santorum happens to all of us on occasion, and now the Republican party knows the feeling. They went to bed hoping against hope that Colorado, which Romney won easily in 2008, would deliver them from a three-state sweep, but, like Minnesota, which Romney also won big in 2008, and Missouri, it went hard for Rick. What caused this unholy mess? Nate Silver sums it up:

Mr. Romney has had deep problems so far with the Republican base, going 1-for-4 in caucus states where turnout is dominated by highly conservative voters. Mr. Romney is 0-for-3 so far in the Midwest, a region that is often decisive in the general election. He had tepid support among major blocks of Republican voters like evangelicals and Tea Party supporters, those voters making under $50,000 per year, and those in rural areas. Instead, much of his support has come from the wealthy areas that Charles Murray calls Super ZIPs — few of which are in swing states in the general election.

Meanwhile, polls show that a large number of Republicans have tepid enthusiasm for their field. And this has been reflected in the turnout so far, which is down about 10 percent from 2008 among Republican registrants and identifiers.

These are not the hallmarks of a race with a dominant candidate. Nor, even, of a race with a candidate like John Kerry, the best of a somewhat weak lot of Democrats in 2004, but one whom the party settled upon fairly quickly.

Instead, this race bears more resemblance to something like the 1984 Democratic contest or the 1976 Republican race. There was a favorite in each of those contests — Walter Mondale in 1984 and Gerald Ford in 1976 — and they were ahead in the delegate count more or less from start to finish.

If you’re a mainstream Republican Romney backer, are you going to haul your ass out of your warm house, trundle down to poorly-run caucus, and face the wrath of some teabaggers when you raise your hand or stomp your foot or whatever caucus voters do to indicate preference? Mitt Romney’s only hope for the remainder of February is that the next two contests, in Arizona and Michigan, are primaries in states that should be sympathetic to either the Angel Moroni or the name Romney. As David Axelrod notes, Mitt’s Super PAC is going to be banging away at Santorum, but I don’t think he’s as soft a target as Gingrich, at least for Republicans. His weakness as a general election candidate is his bigotry, but that’s a strength among the 27 percenters, so Romney can’t mention it. Instead, the Romney campaign will be attacking Santorum’s earmarks when he was in Congress.  That’s a far cry from adultery and moon bases.

Let’s face it:  in their hearts, the Tea Party base has secretly wanted Santorum all along, but they held their nose and voted for Romney.   With 11 caucuses in March, they can come out of the closet and wallow in it.

END_OF_DOCUMENT_TOKEN_TO_BE_REPLACED

Thanks to Tbogg, who has been so much more than a snark blogger on this issue–really, go over there and read his posts over the last week as this mess developed and see the marketing perspective on how this disaster unfolded and what it means for SGK in the long run–we get word that it appears that Horrible Human Being Karen Handel is about to spend a LOT more time with her family.  Nothing definitive yet, but SGK is looking for a new “Director of Public Policy” and Handel’s title (in addition to Horrible Human Being) is “Vice President of Public Policy.”

Just how bad is this whole thing?  Well, SGK turned down a demand by Curves, the ladies-only gym chain to sever ties with Planned Parenthood in 2004.  Nancy Brinker wrote about it in her book, Promise Me, in 2010:

“The grants in question supplied breast health counseling, screening, and treatment to rural women, poor women, Native American women, many women of color who were underserved–if served at all–in areas where Planned Parenthood facilities were often the only infrastructure available. Though it meant losing corporate money from Curves, we were not about to turn our backs on these women.”

Back then, she said that she was sorry to lose Curves‘ corporate support (Curves’ founder is a bigtime fundy) but that “we remain focused on our mission.”  So I think the question begs asking of Nancy Brinker, “WTF, lady?”

Oh, and open thread for those who need such.  Note–seeing Blake Shelton singing Prince on The Voice–fucking awesome!

END_OF_DOCUMENT_TOKEN_TO_BE_REPLACED

I was about to write a post on this, but as usual, the faster and smarter front pagers beat me to it.  My take is this–in the HuffPo column by Laura Bassett, both the Susan G. Komen For the Lure foundation, and the article’s writer Bassett, blame Planned Parenthood for SGKFTL’s own goal, with absolutely no evidence to back that up:
The author states, without attribution: <blockquote>The charity struggled to deal with the pressure, especially in a face-off against Planned Parenthood, an organization whose fine-tuned political team has experience in these high-pitched, high-stakes debates.</blockquote>
and then later in the column: <blockquote>”Komen’s not equipped to spend its days fighting political battles,” the source said. “Abortion is not our issue, and I think [leadership] tried to finesse a way out of it, and this investigation criteria was the solution. And it blew up in their faces. They were just naive in the face of [the] incredibly sophisticated Planned Parenthood operation.”</blockquote>
The columnist does say that the insider who gave her the information “was furious about the cave[in to PP]” but gives no context to the assertions that Planned Parenthood put a shiv into SGK.

As long as SGK can delude itself into thinking that they were mau-mau’ed by a very effective Planned Parenthood, they will continue this behavior, as will any other organization that learns that particular “lesson.”  They are, along with their partners and friends in the conservative blogosphere, and apparently at the Huffington Post, working very hard to change the narrative of the story to one of bravely standing up to a shake down by a bunch of baby killers, only to have the rug pulled out from under them by those same baby killers rallying their baby-killing-loving supporters.  Now perhaps, being a bear of very little brain, and liking honey too much, I didn’t notice the huge PR push by Planned Parenthood.  I thought it looked like a huge number of women reacting to the betrayal by a charity that claimed to be all about women’s health, taking a huge shit all over another organization that is primarily about women’s health.  But that is because I don’t suffer from the siege mentality that conservatives live under.

END_OF_DOCUMENT_TOKEN_TO_BE_REPLACED 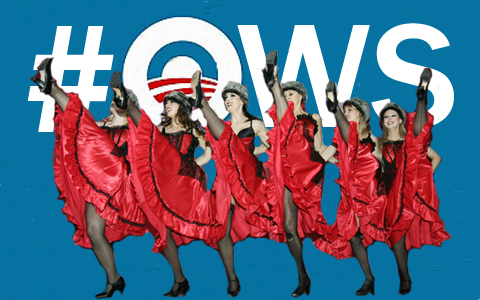 Charles Krauthammer is mad enough to stomp bunnies, a man consumed with the type of bitterness that can only come from being thwarted by putative allies when a cherished goal is in sight. Things were going so well. With an assist from elderly social conservatives in patriot drag,* the GOP had successfully rebranded the economic free fall and debt juggernaut Bush bequeathed to the American people as the consequence of Obama’s “reckless spending, new entitlements and oppressive regulation with higher taxes.”

The GOP’s electoral victories in 2010 put conservative fantasies about tossing old ladies and elderly gents into the maw of the private insurance industry and slashing social programs that serve the poor like Freddy Krueger on a meth binge tantalizingly within reach. And then Gingrich and Perry had to go and fuck everything up.

According to Special K, Gilded Age-levels of wealth inequality have nothing to do with the economic shit-pile, and Wall Street marauding is so irrelevant to the issue that it doesn’t even merit a mention. No, these extraneous topics were injected into the debate by the president as a “class-envy gambit” to bolster his political fortunes. And Obama’s strategy would have totally bombed due to “suffering in part from its association with an Occupy rabble that had widely worn out its welcome.”

But then, “the struggling Democratic class-war narrative is suddenly given life and legitimacy by…Republicans! Newt Gingrich and Rick Perry make the case that private equity as practiced by Romney’s Bain Capital is nothing more than vulture capitalism looting companies and sucking them dry while casually destroying the lives of workers.” And now “Romney’s wealth, practices and taxes take center stage.”

How bad is it? This bad:

The opportunity to demagogue once-routine debt ceiling hikes? Gone. A Koch-funded photo op featuring tricorn-hatted Tea Partiers staging a Hoveround siege of the Capitol? To ashes in Krauthammer’s mouth it turns. All thanks to those meddling kids on the GOP presidential slate. Damn them. Damn them to hell.

*H/T to fellow Rumproast blogger Hunger Tallest Palin for this dead-on description of the Tea Party.

END_OF_DOCUMENT_TOKEN_TO_BE_REPLACED

Rick Perry should drop out of this race. . . . And I like Rick Perry, I thought he was pretty cool in the last debate, except for that little problem with calling Turkey an Islamic terrorist regime. I mean, God bless him but he’s not put in the time to kind of know anything about foreign policy and you can’t be president if you don’t know anything about foreign policy.

The Romney Book is going to be the gift that keeps on giving for months and months….